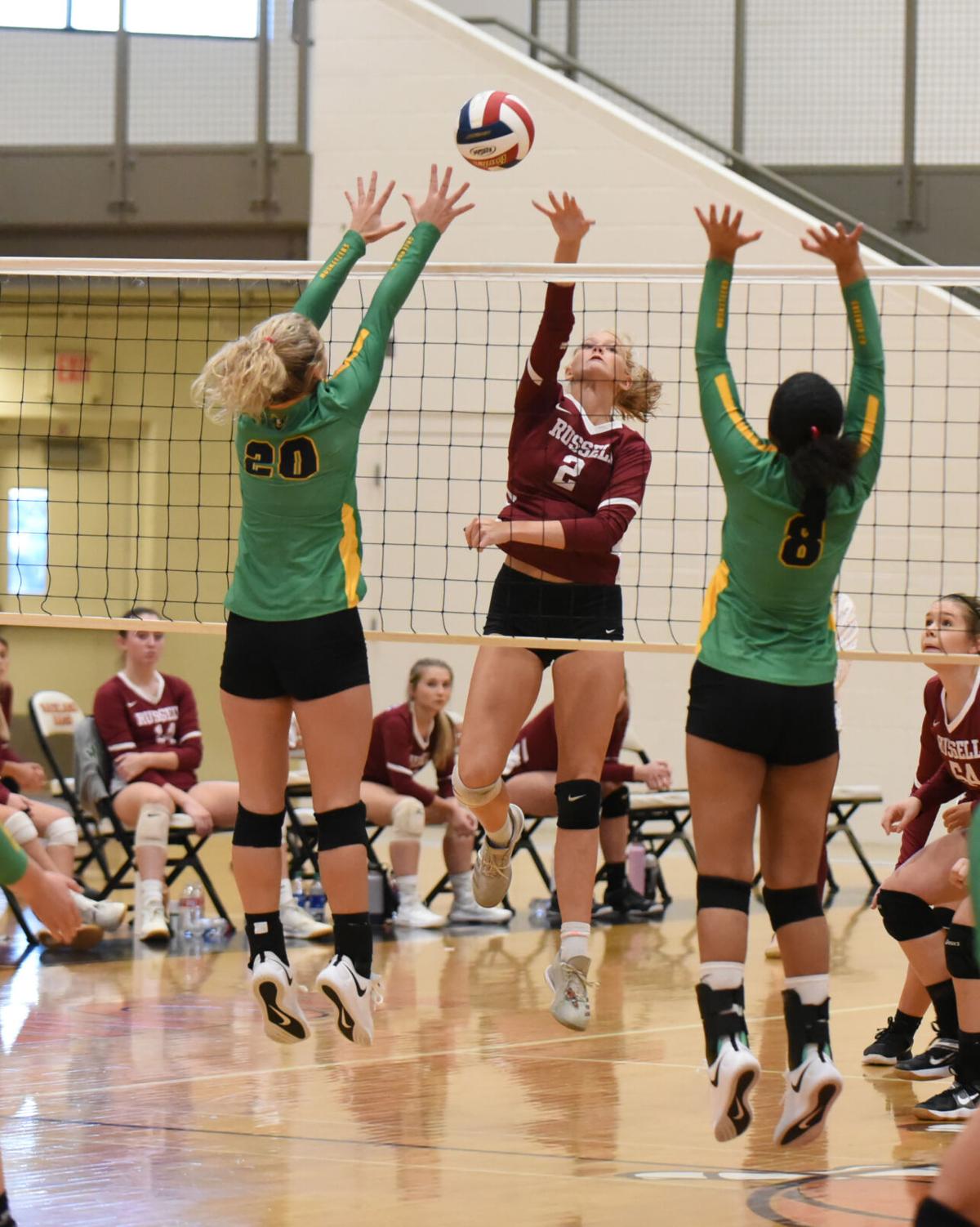 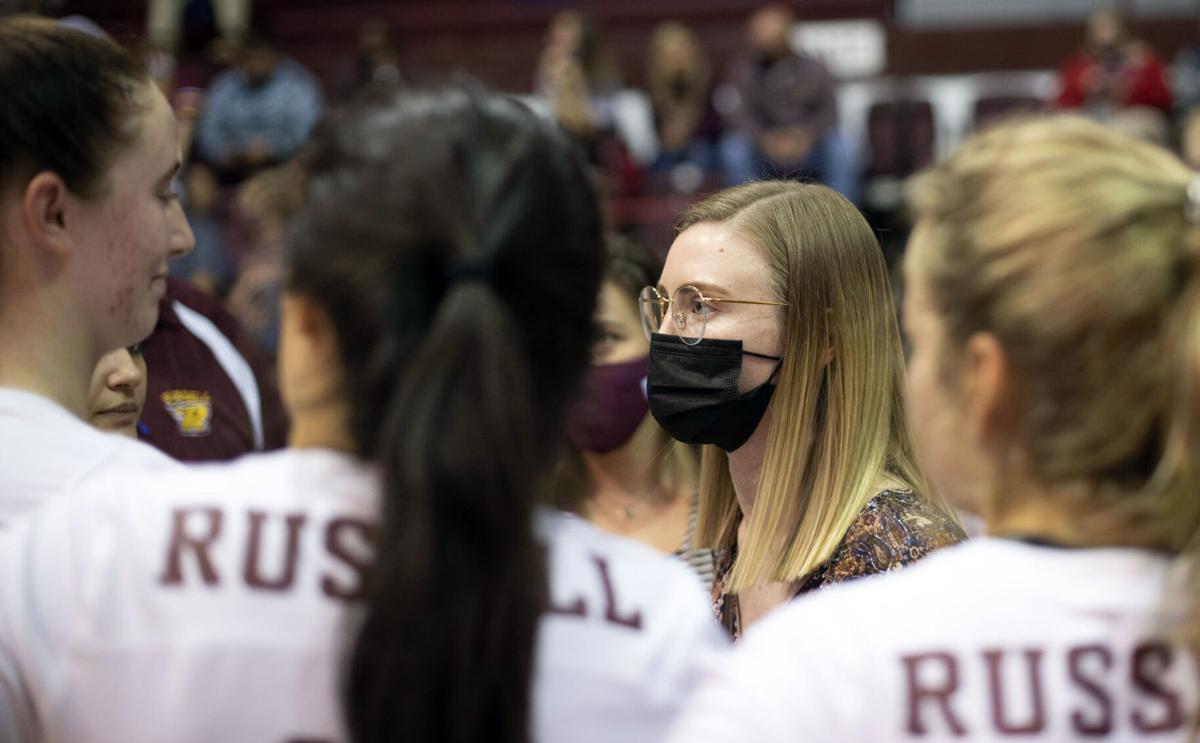 A dominant Russell volleyball team didn’t have to deal with much adversity on the floor this year. On the rare occasions it happened — an early-season sweep loss at West Carter, a less-than-favorable draw in the 16th Region Tournament — Tiffany Perry already had a response dialed up.

“I always tell the girls, there’s nothing I hate more than people feeling sorry for themselves,” the Lady Devils’ seventh-year coach said. “At one point in the year I said, ‘Don’t feel sorry for yourself, it’s pathetic,’ and the girls always laughed about it, but it’s true.

“Once you get past the mental, all you have left to show is your skill, and I knew we had the skill, and for them to break past those mental barriers was really the most amazing part. I think that was the biggest accomplishment for this team this year.”

It led to other accomplishments, namely Russell’s first region tournament title since 2012 and its first victory in the state round of 16 since 2008.

“We all experienced that loss last year when we lost to Rowan,” Lady Devils senior middle hitter McKenna Barfield said of Russell’s 2019 region semifinal setback to the Valkyries, “and the year before they were on the team when we lost to Rowan in the (semifinals). All of us were just kind of tired of losing.”

So they didn’t, at least not often. Russell won 15 consecutive matches to reach the state tournament quarterfinals after a 5-2 start.

Barfield, who turned in 252 kills, 91 blocks (44 solo) and 29 aces en route to being named 16th Region Player of the Year by the Kentucky Volleyball Coaches Association, was a pivotal reason why. She’s also The Daily Independent’s All-Area Player of the Year.

Barfield touted her team’s success and called the individual honor “just an extra thing for me.”

“In our region, even just in the middle hitters, there is so much good competition,” Barfield said. “Bailey (Brashear) at Rowan and (Audrey) Biggs at Boyd, we have a region full of big middles, so for them to say, ‘Oh, she’s the best,’ it’s just the peak of my senior year.”

Perry noted the growth of Barfield — literal and figurative — from her start as a gangly sixth-grader to her senior campaign.

“She never gave up, not one moment, and she played an extremely vital role in this team,” Perry said. “I’m not saying that she did it all, but she sure tried.”

Directing it all was Perry, a Russell alumna who played on five region tournament title teams, coached the Lady Devils to that distinction for the first time this season. She earned All-Area Coach of the Year honors along the way.

“Just seeing the look on (the players’) faces and just being able to take it all in from a different role was really special for me,” Perry said. “I got to experience that every year as a player and remember how special it was and how many happy tears were shed, and to see that in the girls shows how much the sport doesn’t change and the feelings don’t change. ... When you hit those big milestones is really when the emotion comes out, and that doesn’t change for anybody.”

Russell did it with the toughest region tournament road it could’ve faced. Up first was the Lady Comets on their home floor. West Carter had swept the Lady Devils on their senior night in Olive Hill on Sept. 14.

After that loomed Boyd County, which only had one region loss to that point, in the semifinals. And three-time defending region champion Rowan County waited in the final. The Valkyries had eliminated Russell in each of the last three years.

“At first we were just kind of disappointed, because we were like, ‘Oh, we got the hardest draw, of course,’” Barfield said. “’To get to the top, we have to beat everybody else that would be in that position.’”

Russell then realized it could use that to its advantage.

“(Unlike) if we had started off playing a less competitive team, the momentum started at the very beginning,” Barfield said. “We didn’t lose momentum; we didn’t have to gain it. One win against a good team like West — they had beaten us earlier in the season, so we were like, it’s our time.”

That time, as it turned out, was late. Russell drew the second half of a doubleheader in each of the first two rounds. The semifinals against Boyd County went five sets and ended after 10:30 p.m.

Perry said she was “salty” when she saw the bracket, and not just because of who the Lady Devils were to play.

“Eight o’clock games are not good for the soul,” Perry said. “That’s when I start getting ready for bed. I was like, how am I going to do this? How are the girls going to perform that late at night?”

Then Perry remembered, by the rules she herself had set out, she couldn’t worry about it.

“I just said, it doesn’t matter where we play, when we play,” Perry said. “What matters is that we show up and that we don’t feel sorry for ourselves, and we did that.”

They did that, to the tune of a 3-0 sweep of West Carter, the five-set victory over the Lady Lions and a 3-0 dethroning of Rowan County.

Russell then swept Paintsville in the state first round — held at Russell in a coronavirus-related change to the normal state tournament format — before falling to West Jessamine, 3-0, in the state quarterfinals.

The postseason run fulfilled the destiny the Lady Devils set out for themselves.

“At the beginning of the year we had it set in our minds that this was our year,” Barfield said. “We have banners hanging up in the gym that have the years of region championships, and we wanted our year to be up there. Coach Perry, (assistant) coach (Kacie) Mullins, (title teams they played on) were all up there. We wanted to be up there too.”

Boyd County recorded the most selections to the All-Area team with four. Abby Baker dished 602 assists, including the 2,000th of her career, and was 24th in the state in assists per set at 8.25. She chipped in 167 digs and 29 aces.

Paintsville, champion of the 15th Region, placed Bella Blackburn and Kara Ward on the All-Area team. Blackburn gave 612 assists, making her 11th in the state in assists per set (9.42). She added 147 digs and 49 aces.