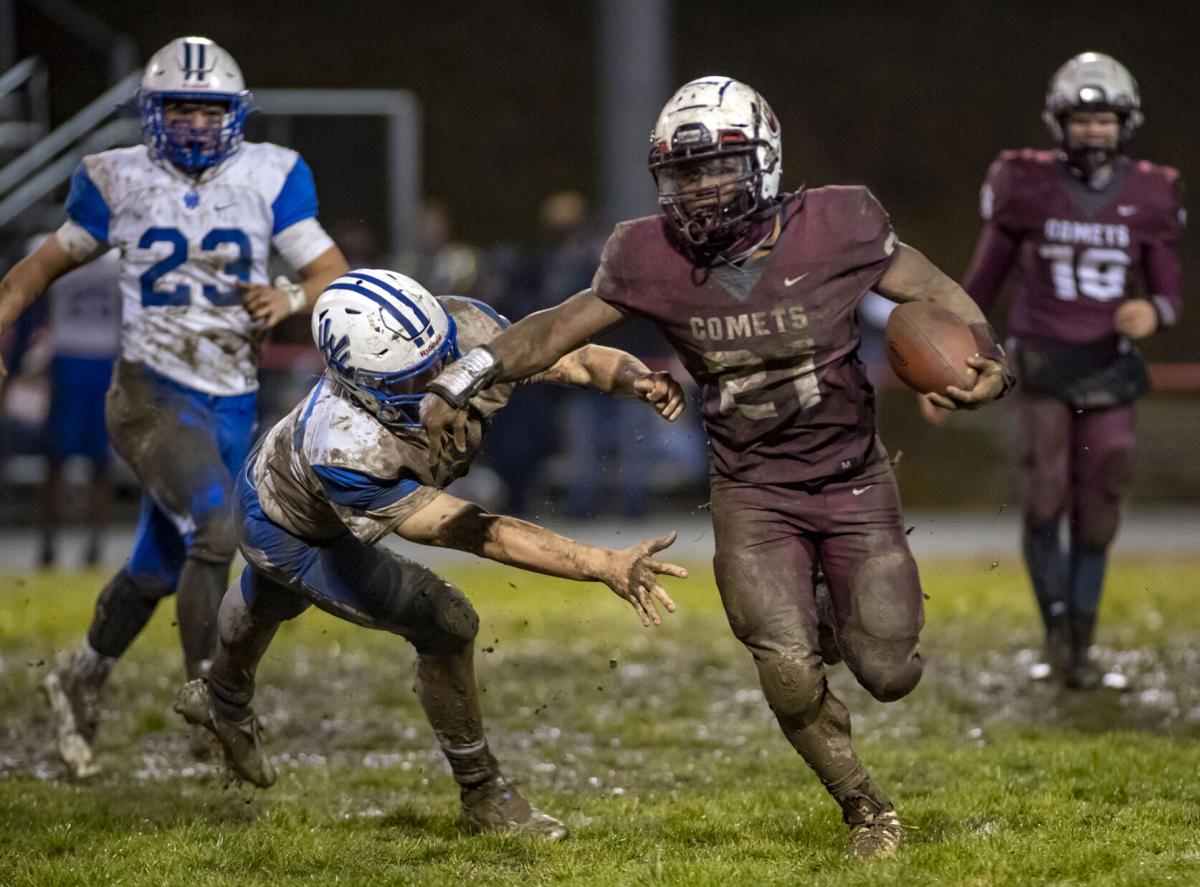 West Carter’s Leetavious Cline runs past a Walton-Verona defender on Dec. 4. Cline was named the 2020 All-Area Small-Schooll Player of the Year and became the Comets all-time leading rusher this season. 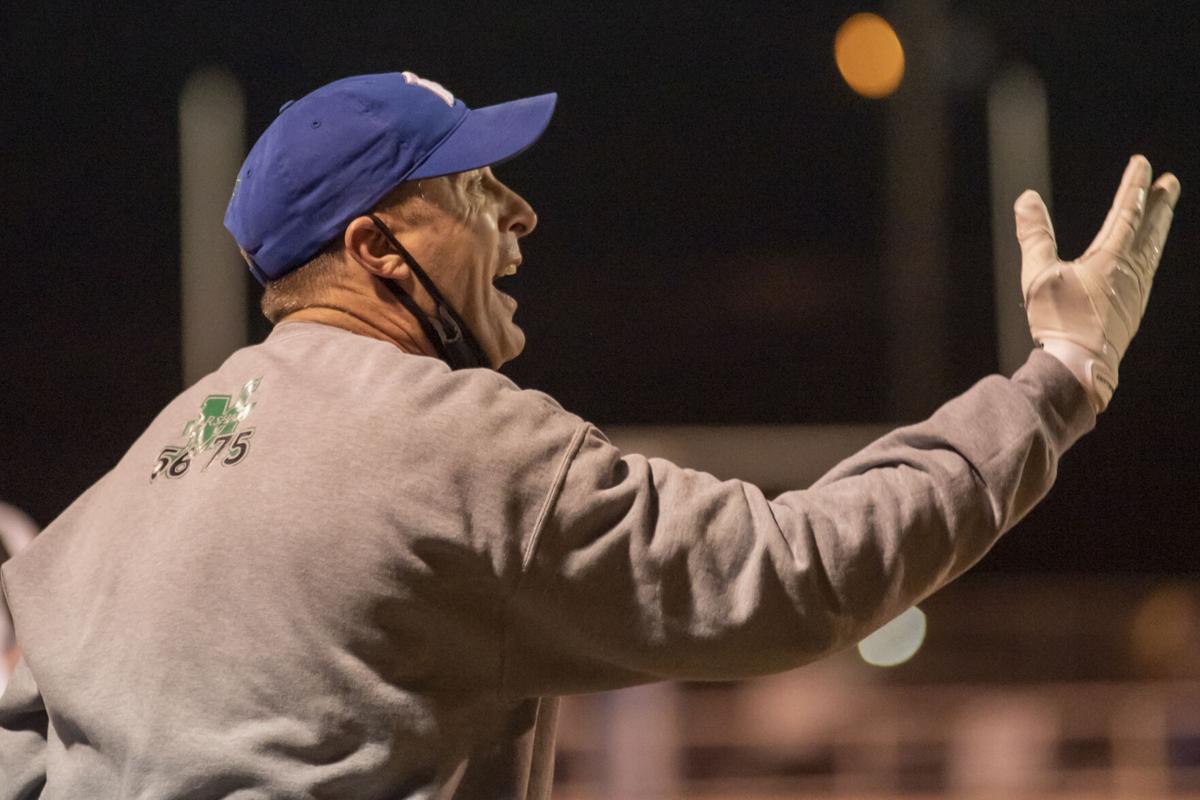 Paintsville coach Joe Chirico calls a play from the sideline during the Class A state semifinal game against Newport Central Catholic at Memorial Field on Dec. 11. Chirico was selected as the 2020 All-Area Small-School Co-Coach of the Year. 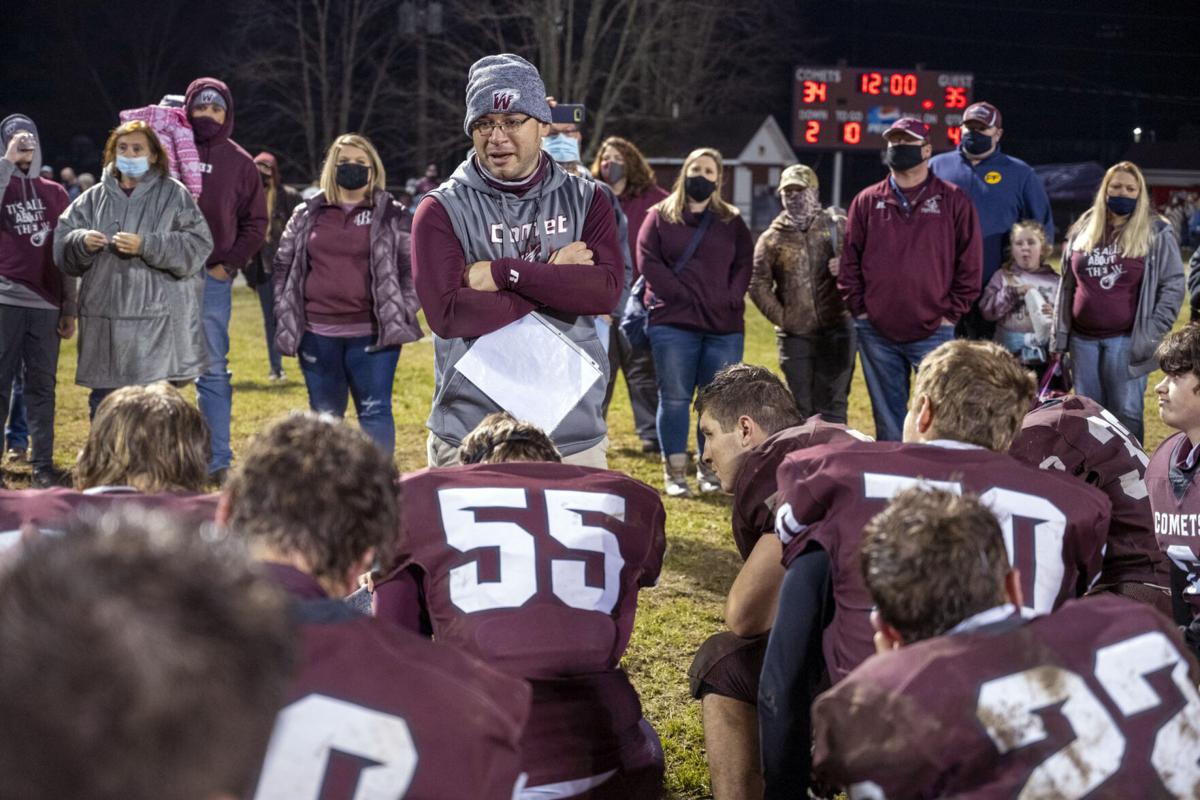 An emotional Daniel Barker speaks with his Comets following their loss to Beechwood after the school’s first state semifinal game on Dec. 11. Barker was named the 2020 All-Area Small-School Co-Coach of the Year.

West Carter’s Leetavious Cline runs past a Walton-Verona defender on Dec. 4. Cline was named the 2020 All-Area Small-Schooll Player of the Year and became the Comets all-time leading rusher this season.

Paintsville coach Joe Chirico calls a play from the sideline during the Class A state semifinal game against Newport Central Catholic at Memorial Field on Dec. 11. Chirico was selected as the 2020 All-Area Small-School Co-Coach of the Year.

An emotional Daniel Barker speaks with his Comets following their loss to Beechwood after the school’s first state semifinal game on Dec. 11. Barker was named the 2020 All-Area Small-School Co-Coach of the Year.

The indelible events of the 2020 season left their mark on history.

Area teams persevered and made time to make some history of their own.

Paintsville culminated a century of football with a championship. West Carter shattered school records while collecting several defining moments on its home turf during the postseason.

The Tigers had encountered the Kroger Field atmosphere before but tasted defeat there in the state title game last year. Paintsville turned the outcome around in 2020, dismantling Kentucky Country Day, 38-7, to hoist the shiny new hardware on the program’s diamond anniversary.

“COVID-19 changed a lot of the way we do things,” Paintsville coach Joe Chirico said. “It’s been really special. This team is a special group of kids. They love being around each other and loved every moment that they got to spend together. It was exciting and it makes you enjoy what you do.”

“It just warms your heart,” he added. “It’s hard to put that into words. Your kids go into battle and then do the things that they need to do week in and week out. It’s just an unbelievable feeling.”

The Comets played in their first state semifinal after achieving the school’s first 10-win season. West Carter coach Daniel Barker said his team has showed its grit and toughness all year long.

“I’m just so proud of these kids, and not just what they accomplished on the field,” Barker said. “This year was hard starting with all the stuff they had to do on their own before we were able to practice. To see all their hard work pay off, it was really rewarding. We had a good group of kids that had a really good year.”

The Comets fell one point shy of securing a spot in the Class 2A championship game. Beechwood converted on a late two-point conversion in Olive Hill on its way to a 15th state title the following week.

“That was a really fun game,” West Carter running back Leetavious Cline said. “It was probably one of the best games I’ve ever played in, even though it didn’t end how we wanted. It was extremely fun and a very competitive game.”

West Carter rallied from a 20-point deficit to take the lead on two different occasions in the fourth quarter. With their recent postseason success, the Comets believe they can play with anybody.

“Once we started scoring, we settled in,” Barker said of the state semifinal contest. “Our kids knew at halftime what they had to do to get back in the game. You can just see them changing. They knew that they belonged. I hope it’s a program-defining game for us, not just for our program but for everybody. There is good football in northeastern Kentucky.”

Cline was named The Daily Independent Small-School Football All-Area Player of the Year. The senior became the school career and single-season rushing leader, accumulating 2,115 yards on the ground this year and 32 touchdowns. He led the state in Class 2A in rushing yards.

“The school’s all-time leading rusher is something I’ve always wanted to be since I’ve got in high school,” Cline said. “It was a lot of fun this season. We didn’t expect to break all these (school) records because of COVID-19. We got to play 12 games this season and we took advantage.”

“If he’s not the best player that we’ve ever had, he’s definitely in the conversation,” Barker added. “He was one of our hardest workers. He never missed a single day, whether it was practicing or weightlifting. No coaching point was ever too big or too little for him. Whenever you have a player that was that good and is willing to do whatever it took for the team, it just helps everybody.”

Paintsville faced a postseason run without its leader at quarterback. Jake Hyden injured his knee late in the regular season and receiver Karsten Poe was inserted into the role, having never taken a snap under center. The Tigers rallied and rattled off five consecutive victories.

“That is what a team does,” Chirico said. “You have your brother out and you pick him up when he’s down. Jake kept telling him, ‘Guys, keep playing hard. I’m going to be back.’ He did come back, and the team was excited for him. They always play for each other. When one is hurt, they all hurt.”

Barker echoed the same sentiments about his bunch of Comets.

“Ever-ybody is very close,” Barker said. “They are so unselfish. It didn’t matter who had a big game. I know Leetavious had the big game most weeks for us, but if it was Orry (Perry) and our receivers, he was happy for them. It was the most close-knit team that we’ve had since I’ve been here.”

Paints-ville led the way with 11 members on the All-Area team. Hyden, a four-year starter at quarterback, moved to running back during the final two games of the playoffs.

He scored three times in the Class A championship and finished his final campaign with 462 yards on the ground and 12 TDs. He also collected nine touchdown tosses with no interceptions.

Harris Phelps accumulated 1,406 rushing yards in his first season as a varsity starter. He also found the end zone 19 times this season. He produced a monster game with 221 rushing yards and a score in the state title game.

Poe caught four TD passes during the regular season. The receiver-turned-signal-caller kept the Tigers and the offense moving forward to the school’s first state title. He accounted for seven playoff touchdowns, including the game-winner on the road at Raceland.

“Our preparation was different because we didn’t know what to expect last year,” Chirico said of the state final atmosphere. “This year going in, we understood it a little bit better. We got to experience it as a team.”

Aaron Baker and John Blackburn led a sizeable and stellar Tigers offensive line. Hunter Ousley made an impact along the defensive line. Mason Lovely and Luke Hyden led Paints-ville in tackles with 120 and 92, respectively, from the linebacker spot.

Devin Hall, AJ James and Jonah Porter rounded out the Tigers’ representation at defensive back.

West Carter quarterback Orry Perry conducted the highest-scoring offense in Class 2A at nearly 40 points a contest. He passed for 1,509 yards with 25 touchdown passes and only four interceptions. Eleven of those scoring strikes went to junior receiver Jackson Bond. He added 683 receiving yards.

“Orry is a confident kid,” Barker said. “He is also confident in all his teammates. … It’s a big tribute to him and his leadership. Our players played well this year and they felt great about themselves.”

Linebacker Dylan Roe (102) led the Comets in tackles. Gibson was not far behind with 100.

“It just feels nice that my class and the other classes on the team have moved our program up,” Cline said. “They are some of the best teams that we have ever had.

“These guys should have always been on the All-Area team. They are really good players.”

Raceland placed six Rams on the team. Senior Jake Heighton missed several games last season due to an injury but produced a productive final season. He had 27 touchdowns, 20 through the air, and totaled 1,963 yards of total offense.

Hunter Correll and Will Nichols combined for 148 tackles along the Raceland defensive line. Correll added five sacks. Michael Meade joined a talented group on the team at defensive back.

Rams kicker Peyton Ison punctuated Raceland’s biggest victory of the season. He booted a 36-yard field goal with no time remaining to lift his team to a 23-20 victory over Paints-ville during the regular season.

Weaver amassed 623 rushing yards and five touchdowns as the Panthers advanced to the Class 3A state quarterfinals this season. Pinkley shined on both sides of the ball. Morgan led the defense with 66 tackles.

Members of the team were determined by coaches’ vote.