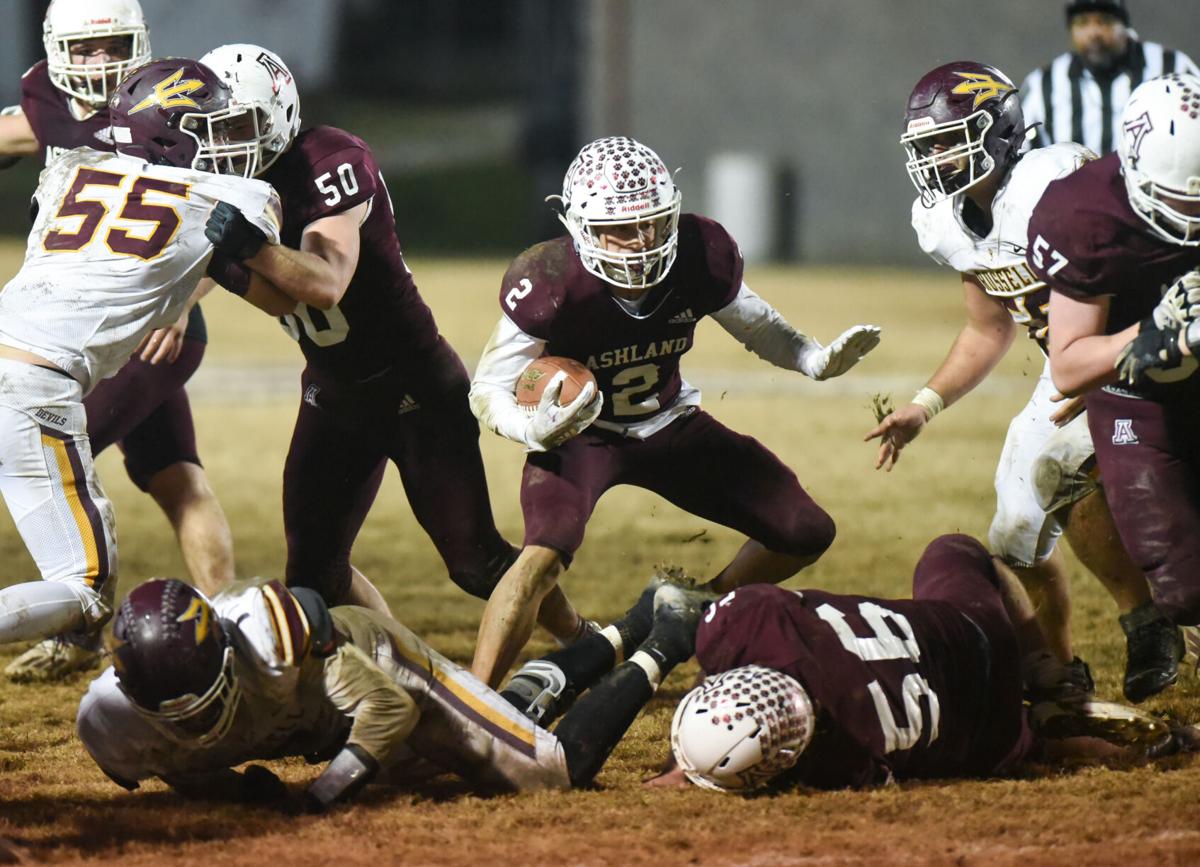 Ashland’s Keontae Pittman looks for running room against Russell during the district championship game at Putnam Stadium on Nov. 27. Pittman was named the 2020 All-Area Large-School Player of the Year. 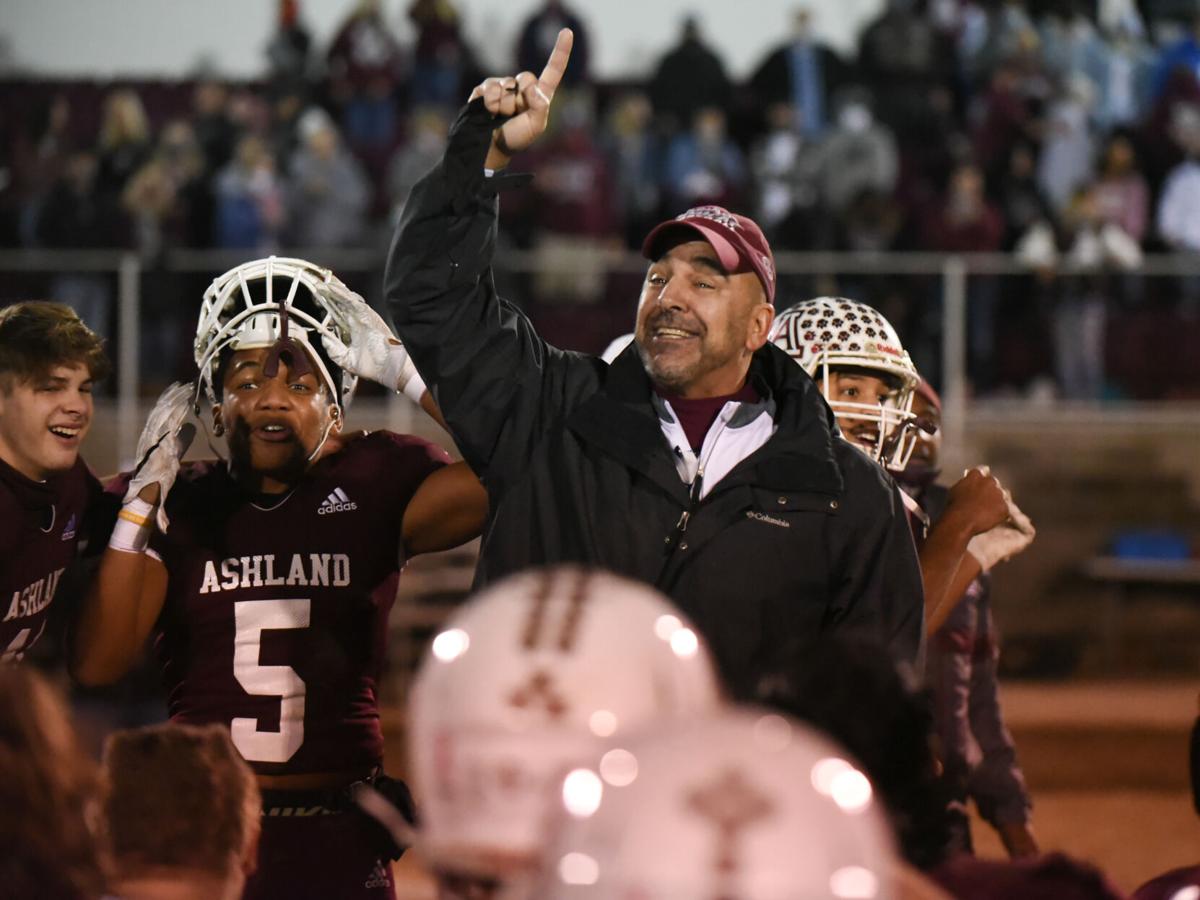 Ashland coach Tony Love is all smiles after defeating Belfry on Dec. 11. Love was selected All-Area Large-School Coach of the Year.

Ashland’s Keontae Pittman looks for running room against Russell during the district championship game at Putnam Stadium on Nov. 27. Pittman was named the 2020 All-Area Large-School Player of the Year.

Ashland coach Tony Love is all smiles after defeating Belfry on Dec. 11. Love was selected All-Area Large-School Coach of the Year.

Tony Love complimented the maturation of Keontae Pittman as a running back. Pittman noted Love’s growth as a coach.

Pittman, the Kentucky Football Coaches Association Class 3A Player of the Year, learned to run more the way Love likes — hard, tough, toward and through contact. Love and his staff opened up their offense to best use the talents of a deep group of playmakers.

Both played pivotal parts in Ashland’s first state championship in 30 years, and both earned accompanying recognition as The Daily Independent All-Area Large School Football Player and Coach of the Year.

The Tomcats navigated past physical playoff challenges from Russell and Belfry before outclassing Elizabethtown in the state final.

“It kind of doesn’t feel real, to be honest with you,” Pittman said of the championship. “It’s an amazing feeling. Even after State it just didn’t feel real.”

It is, and for Pittman, it’s the culmination of the work Ashland asked him to do to add a gear to his game. Not a faster one — Pittman has always had elite-level sprinter’s speed — but a harder one.

“This year, they put me more as an up-the-middle back,” Pittman said. “I’ve never really been that guy before, so it was definitely exciting to take on a new challenge and just open up our offense a little bit more, get JT (Garrett) the ball a little bit more and try to pass as much as we can.”

Pittman is the latest in a line of exceptional Ashland running backs, immediately preceded by last season’s Player of the Year, Blake Hester, who is now at Akron. Pittman is following that Division I path to Army.

Love thought back over the power of Arliss Beach, the quickness and vision of Quinton Baker and the toughness and speed of Hester.

“Keontae was a different running back, and he brought a different skill set to the table,” Love said. “His speed is phenomenal. ... We talked about being more of a physical runner, and I think as he worked his way through the season, in particular going into the Belfry game, he became more of a physical, powerful runner. And that showed in the state championship game.”

Pittman rushed for 253 yards and three touchdowns on 32 carries in the state final. He came up with 78 yards on 12 carries a week earlier against Belfry — no small feat against what’s regarded as one of the physically toughest teams in the commonwealth.

Ashland can call itself the same this season, with a stable of hard-running backs and receivers, one of the state’s stingiest defenses and a rebuilt offensive line that made a point of not being the Tomcats’ weak point.

“Going into the season, you’re sitting there thinking, OK, if you play great defense, you eke out a score here and there, you got a Division I running back and you got another playmaker (Garrett), you’re hoping that they get loose a couple times a game and then your defense closes out the deal,” Love said. “But our offensive line didn’t want that, and they challenged themselves daily to achieve at a higher level than that. They didn’t want to appear to be the weak link.”

Led by All-Area honorees Jackson Foutch — the lone returning starter up front — and Zane Christian, the Tomcats offensive line paved the way for Ashland to rush for 310.3 yards per game.

“To see the commitment these guys made and the achievements that they got, I’m in awe, to be honest with you,” Love said.

Emphasis on physicality, the running game and defense has always been the philosophy of Love, who even has a “Hit Squad”-themed license plate.

The Tomcats didn’t abandon that — far from it — but they did it differently this year, in particular finding inventive ways to get the ball to Garrett as an inexperienced line and receiving corps and new quarterback improved.

“A lot of people don’t really say coaches grow over the years, but I’ve seen coach Love grow so much this year, more than any other year I’ve seen him coach,” Pittman said. “He has really learned how to use us this year. Sometimes they’re kinda shy with what me or JT can do, but this year, they really let us be us.”

That resulted in high achievement for Garrett and for Pittman, who rushed for 1,557 yards and 24 touchdowns.

It all happened against the backdrop of a pandemic season in which no one knew what was next. Cancellations and schedule scrambling became commonplace, and the Tomcats could be forgiven for wondering if they would have the opportunity to fulfill their potential.

“It was a stressful period for a very long time,” Pittman said. “The 2020 team had the most obstacles this year of any team, I would say. We’ve had the toughest year, with COVID and everything going on.”

Pittman is set to graduate a semester early and begin preparing in earnest for West Point.

“I’m gonna work on building my body up a lot,” Pittman said. “I want to get a lot stronger and a lot faster. I want to get up there and compete for a spot to play. I’d say I want to put about 15 pounds of muscle on and get my speed up a little bit.”

The All-Area Coach and Player of the Year were determined by the newspaper’s sports department. The rest of the team was built by voting of coaches from the eight largest schools of 16 in northeastern Kentucky.

Rowan County’s Austin Fannin and Russell’s Charlie Jachimczuk were voted onto the team as quarterbacks. Fannin completed 61 of 91 passes for 737 yards, eight touchdowns and two interceptions, and he ran for 114 yards for the Vikings, who earned their first state quarterfinal berth in 38 years — which they did not get to play in due to COVID-19.

Jachimczuk became the Red Devils’ all-time leading passer, throwing for 1,671 yards on 103 of 181 passing. He passed for 18 touchdowns and six picks and rushed for 285 yards and four scores. Jachimczuk was also integral defensively, making 23 tackles — 19 solo — and returning two of his three interceptions to the house.

Preston ran for 1,679 yards and 29 touchdowns, caught four scoring passes and delivered a pick-six. Defensively, he made 43 tackles (13 solo), 4.5 for loss and eight sacks.

Wallace amassed 1,416 rushing yards and 16 scores, returned a kickoff to paydirt and made 46 tackles (17 solo), nine tackles for loss and three sacks.

Garrett did a little of everything for the Tomcats. In addition to 502 receiving yards and five scores, he completed 4 of 5 passes for 150 yards and two touchdowns, ran for 505 yards and 10 TDs, and made 29 tackles (20 solo).

Hill had 233 receiving yards and three scores and made 46 tackles, 23 solo, three for loss and six interceptions — tied for second in the state across all classes.

Lykins picked up 409 receiving yards and four touchdowns, made four tackles for loss and grabbed five interceptions, placing him in a tie for eighth in the state.

Russell, a Bowling Green State signee, grabbed 73 yards’ worth of receptions but was used more often as a blocker in the Golden Eagles’ run-heavy approach.

Ashland’s SJ Lycans is the All-Area kicker. He converted 43 of 45 extra points and was 6 for 6 on field goals.

Boyd County’s Jacob Kelley was voted on as an all-purpose player. He ran for 687 yards and seven TDs and made 41 tackles, 27 assisted and six for loss.

Brown made 82 tackles, 35 solo, 14 for loss and three sacks. Clevenger dropped 53 opposing ballcarriers, 21 times by himself. Lemaster made 88 stops, 73 assisted and 8.5 times for a loss, and had 4.5 sacks. Stephens made 26 tackles — 17 solo — and nine tackles for a loss and four sacks. He also rushed for 768 yards and nine touchdowns and had a fumble return for a TD.

Tackett finished his career just shy of 400 career tackles, with 106 to his name this season — 68 solo and eight for a loss. He also ran for 354 yards and three scores and recovered three fumbles.

Alley made 39 tackles, 29 solo and five for a loss, and two interceptions. He also had two receiving touchdowns.

Cain made 49 tackles, 30 assisted and 4.5 for a loss, and four interceptions.

Gibbs made 26 tackles — 12 solo — and three interceptions and scored a safety. He also caught two TDs.

Gillum made 57 tackles, 45 solo and two for a loss, pilfered four passes, rushed for 373 yards and five scores and caught a touchdown pass.

Staten made 50 tackles, 24 solo and two for loss, and intercepted two passes. As the Lions’ quarterback, he threw for 344 yards, five touchdowns and three picks and ran for 586 yards and nine scores.

Underwood made 18 tackles — 11 solo — and ran for 700 yards and eight scores and returned a kickoff for a touchdown.

Ashland’s Calyx Holmes was voted onto the team as a punter.