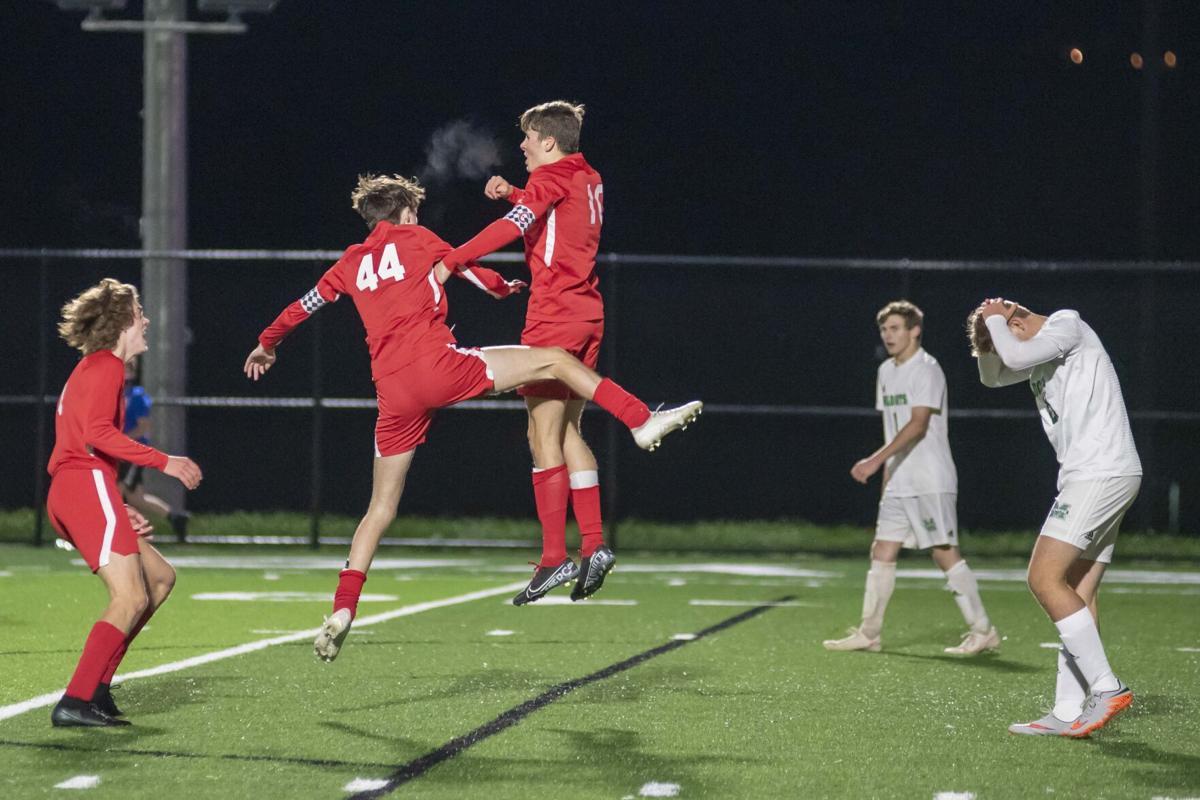 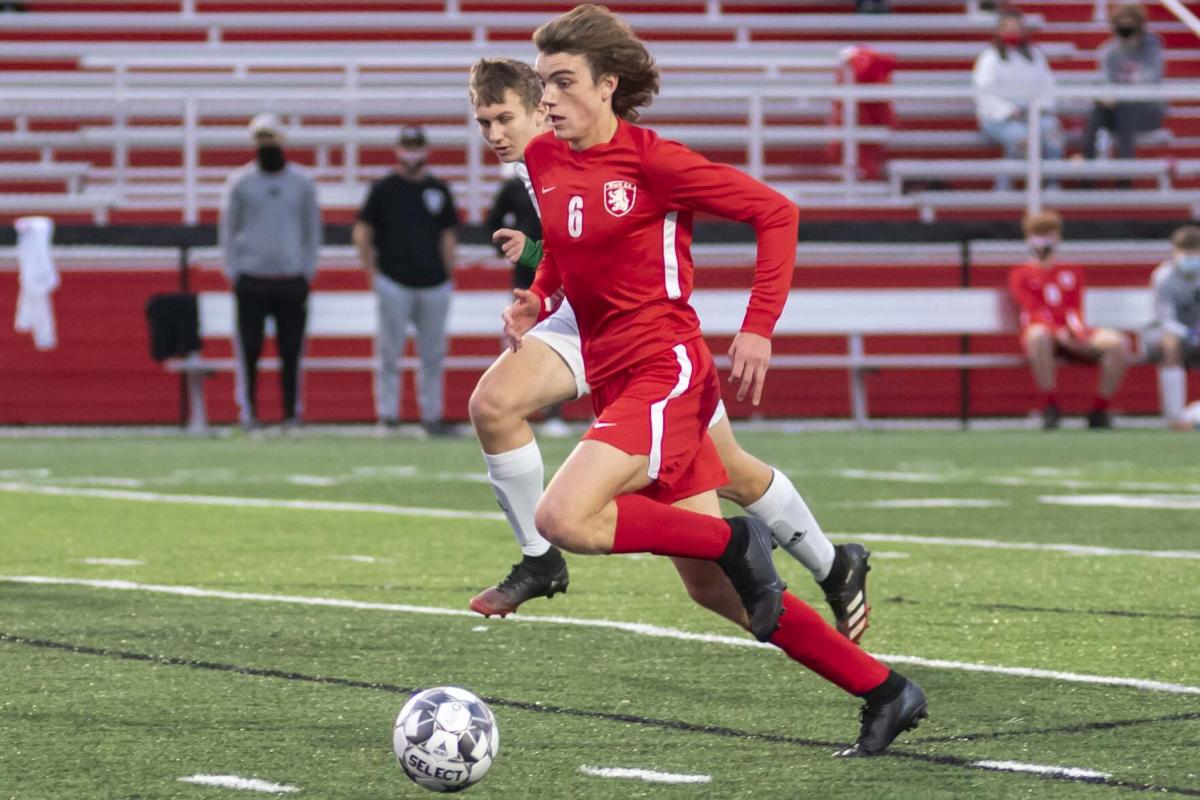 Boyd County's JB Terrill breaks away from the Menifee County defense on Saturday. 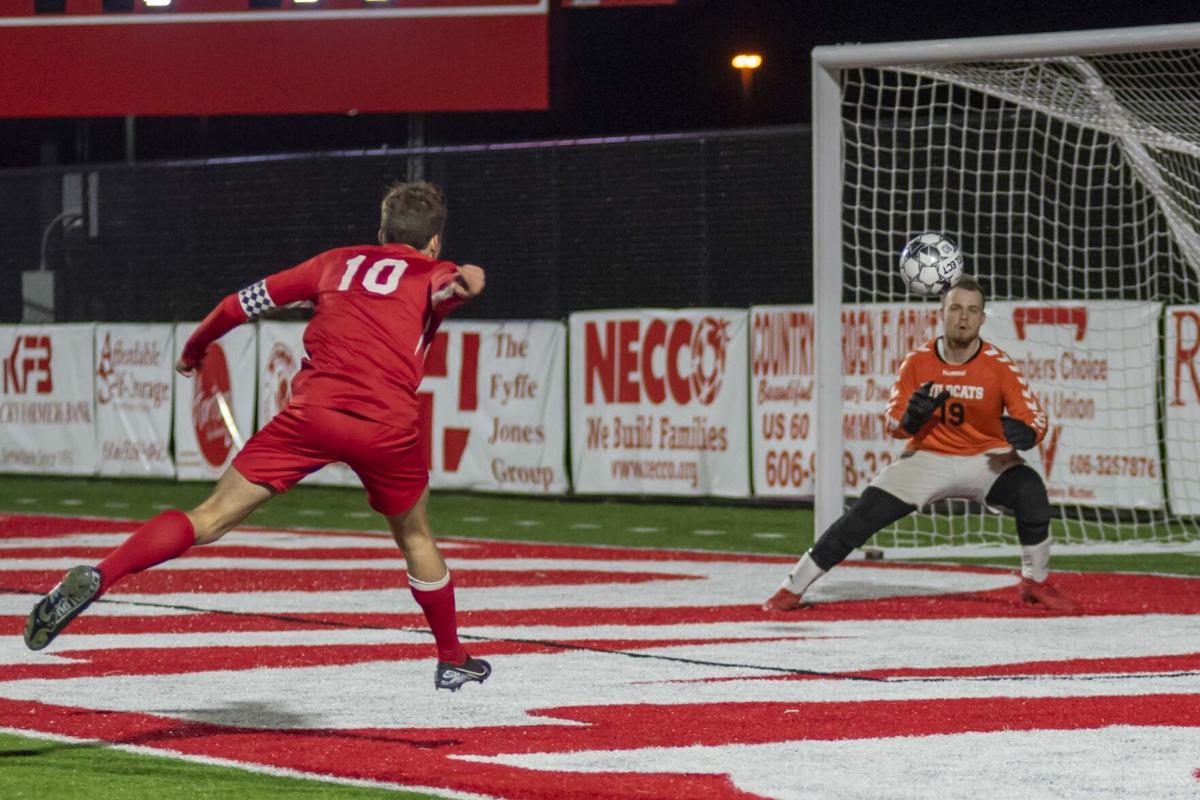 Menifee County keeper John-Tyler Perkins gets the save on a JB Walter shot on Saturday. 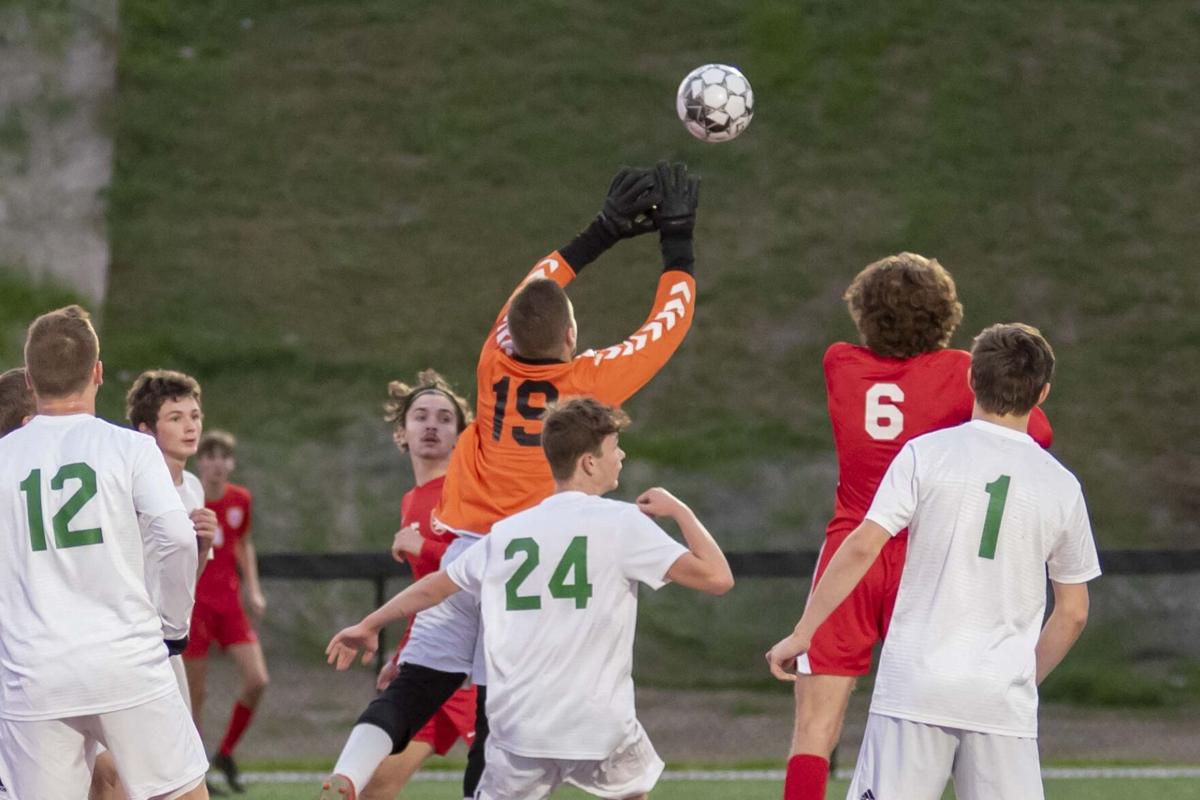 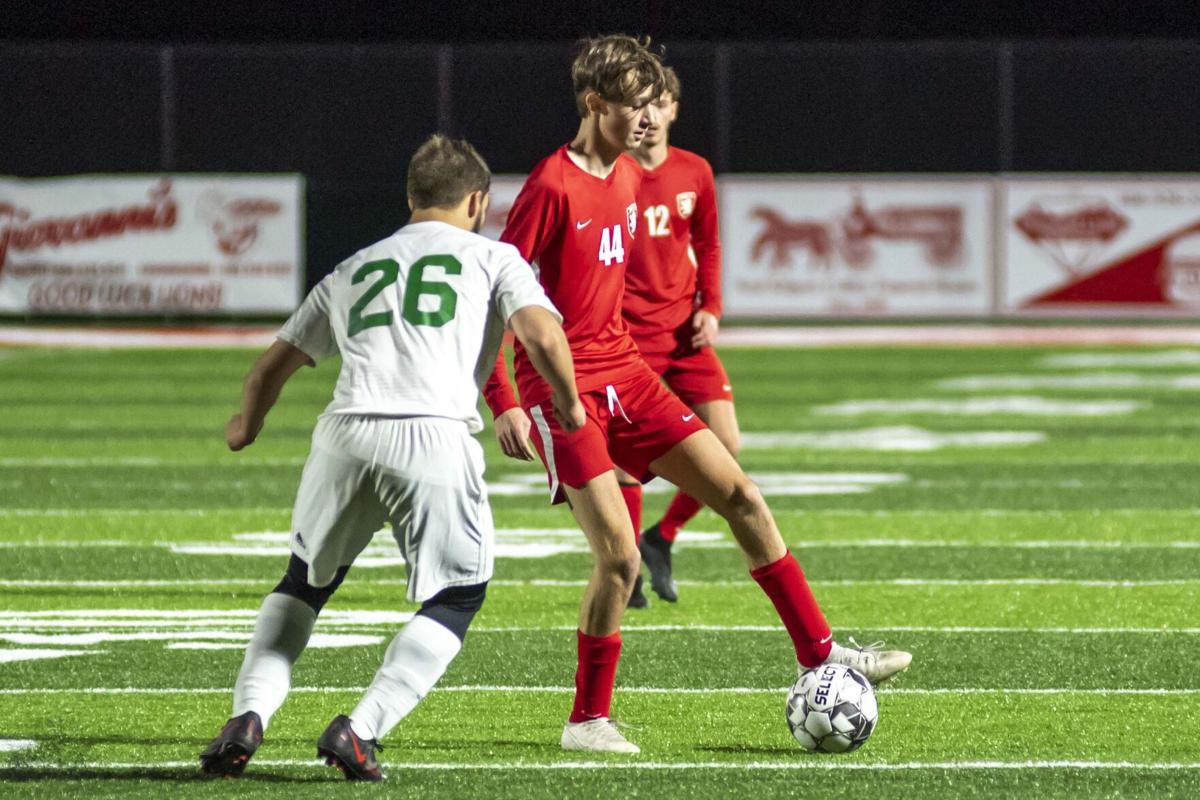 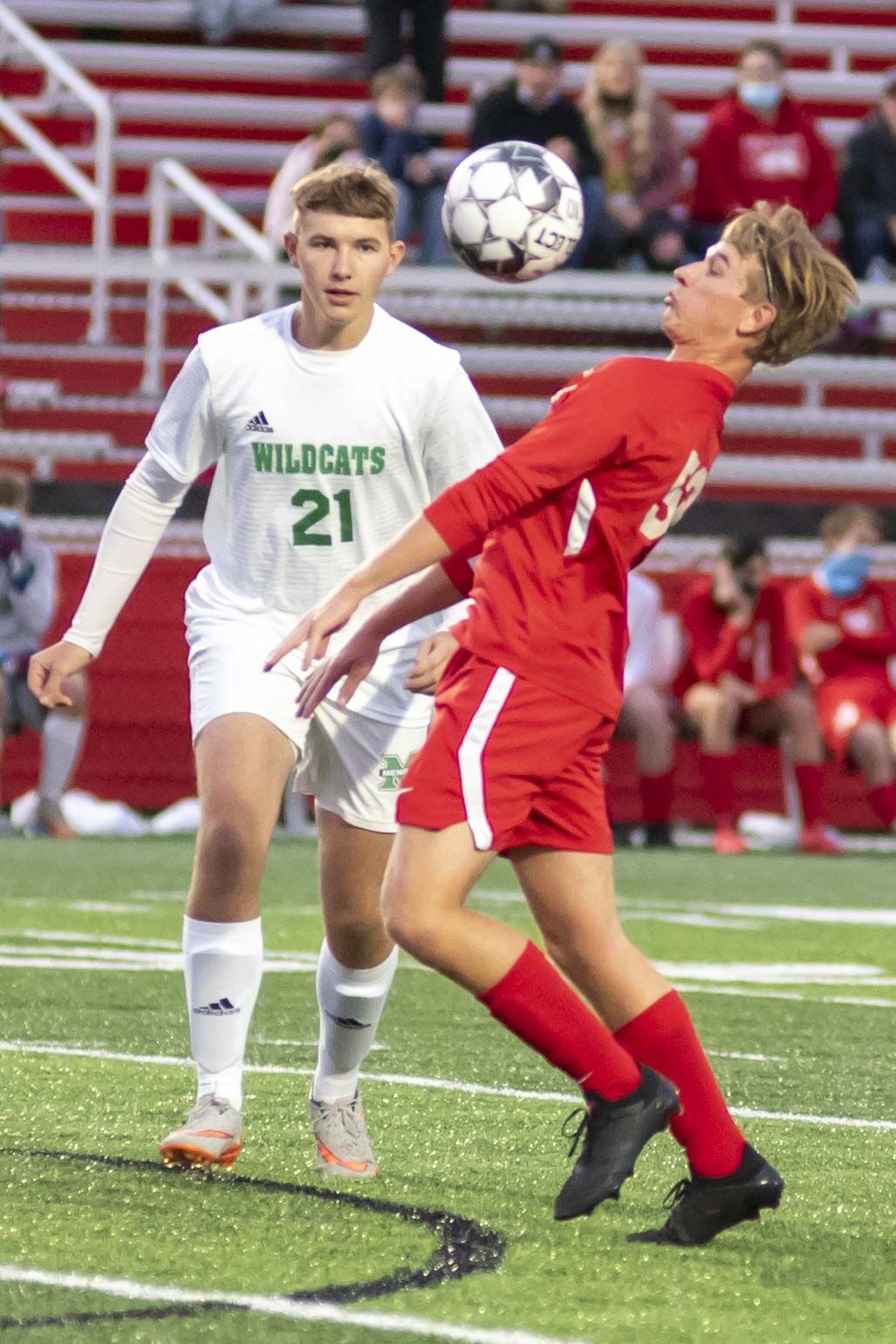 Boyd County's Cameron Gibson plays it off his chest on Saturday. 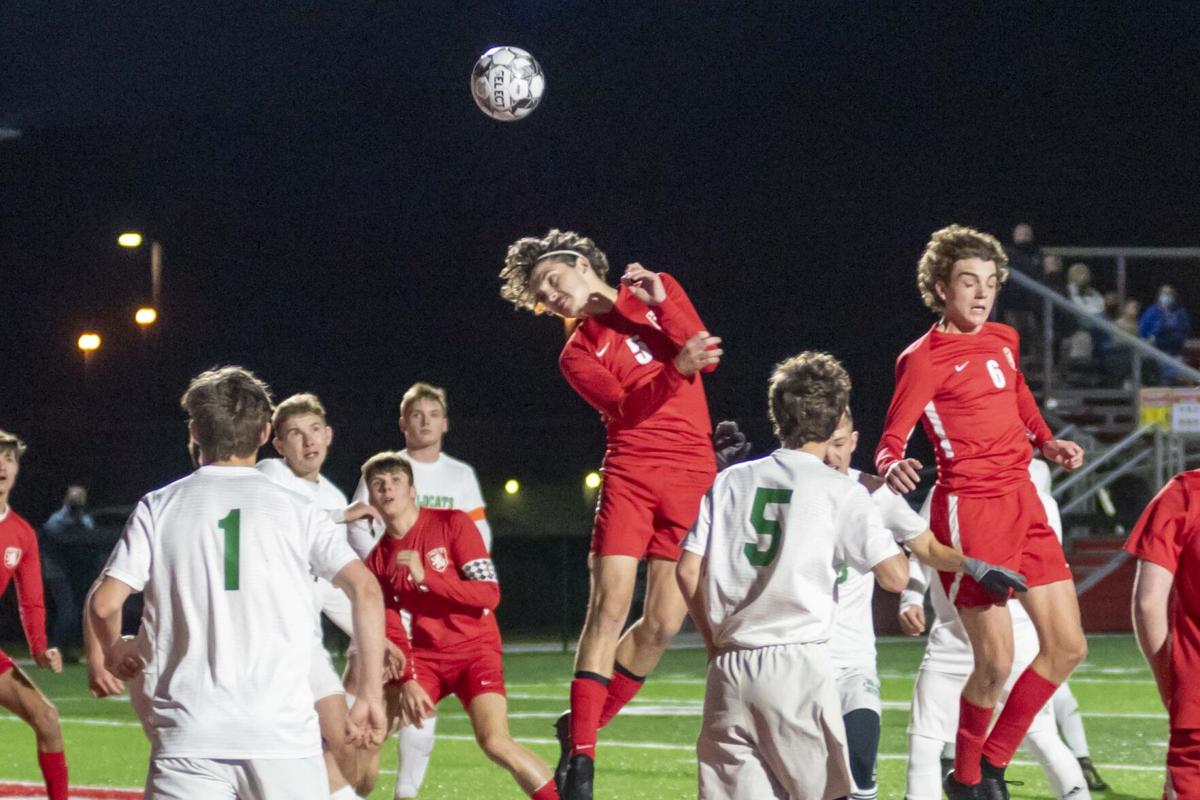 Boyd County's Chase Cordial tries for a header inside the box on Saturday.

Boyd County's JB Terrill breaks away from the Menifee County defense on Saturday.

Menifee County keeper John-Tyler Perkins gets the save on a JB Walter shot on Saturday.

Boyd County's Cameron Gibson plays it off his chest on Saturday.

Boyd County's Chase Cordial tries for a header inside the box on Saturday.

CANNONSBURG Menifee County put on a defensive clinic for nearly 90 minutes Saturday night in the opening round of the 16th Region boys soccer tournament at Boyd County.

But nearly 90 minutes was not enough.

With 20 seconds remaining in the second golden-goal period, Boyd County senior JB Walter got a one-on-one with Menifee County goalie John Tyler-Perkins and for the only time in the game slipped one past the stingy keeper for a 1-0 overtime win.

“Wow!” Boyd County coach Logan Price said. “All the respect for Menifee County. I’m going to have a hard time talking about my team based on the heart and character that other team showed tonight. As a coach and a young guy, I never looked at those things. I looked at my own team. The older I’ve gotten, I’ve come to appreciate things like that, win or lose. It’s a beautiful thing to see when you see a team play as hard as they did.”

At halftime there was an inkling of what the Wildcats were trying to do to the Lions. Before the game reached overtime, their strategy was crystal-clear and they were executing it to perfection.

Menifee County often played as many as 10 men on the defensive side of the ball and only took one shot on goal the entire contest. Even when the Wildcats would get the ball in their offensive side of the field, it was one-on-three and often resulted in a Lions steal and attack.

“That the was game plan and the kids executed it,” Menifee County co-coach Josh Sword said. “They were all willing and they executed it perfectly. We knew Boyd County’s strategy was to play direct and to play physical. I think we matched their physicality. We took our stronger players and put them in the back to just try and prolong the game as long as we could. Almost got it to the PKs.“

Almost was an understatement as Menifee County fended off every Boyd County (9-0) attack until Walter beat the goalie inside the 6-yard box for the win.

“I saw the play developing and I could feel the guy on me (from behind),” Walter said of the game-winner. “The world just slowed down and everything was in slow motion. I saw the ball coming towards me and I took a touch inside away from the man on my hip and put it in the back of the goal.”

Walter had several chances at goals throughout the contest, only to have Perkins record another amazing save or see his shot draw iron.

“He’s willing to put his body on the line and sacrifice his body for the whole team,” Sword said of Perkins. “He’s been our starting goalkeeper since he was a freshman and he just goes after it.”

With Perkins hawking every ball that came his way, his efforts were backed up with nine defenders in front of him, making every Boyd County attack that came up empty even more frustrating than the last.

“I told my team before the game that if I were them, this is what I would do,” Price said. “So, when it happens, don’t be surprised. They have good coaches and the team sold out for defense and my guys were definitely getting frustrated. It’s hard not to. As coaches, we have to tell them to stick to the plan and just keep going and hopefully one will peek through. I never thought the first one would peek through with 20 seconds left, but I’ll take it.”

Menifee County closes the season 6-4 after making its first trip to the region tournament since 2009. Regardless of the outcome, Sword said he was most proud of how his squad handled the pressure as the game wore on.

“I coached my kids no matter how hard you get hit or how hard you get knocked down, have mental toughness,” he said. “If you lose it mentally, you are losing it physically. That’s something we teach and really stress is to stay mentally focused on the game. We got them frustrated and that was part of the plan as well.”