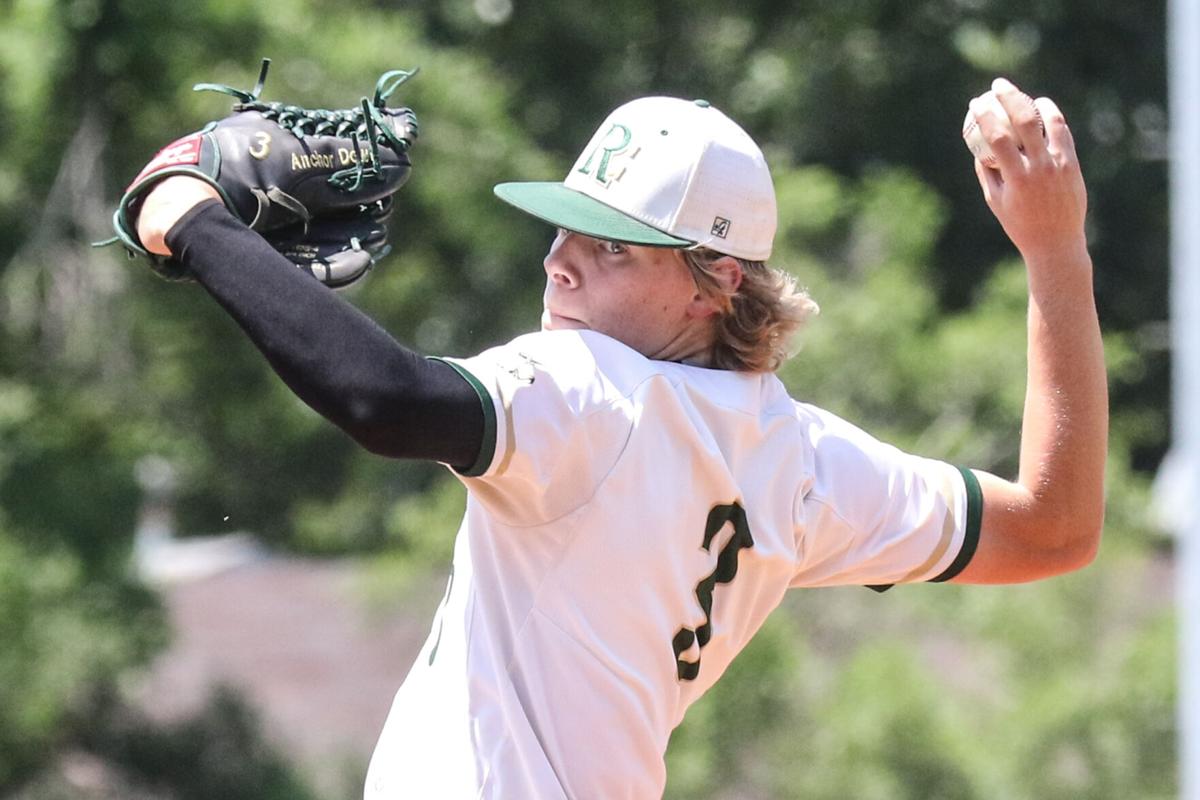 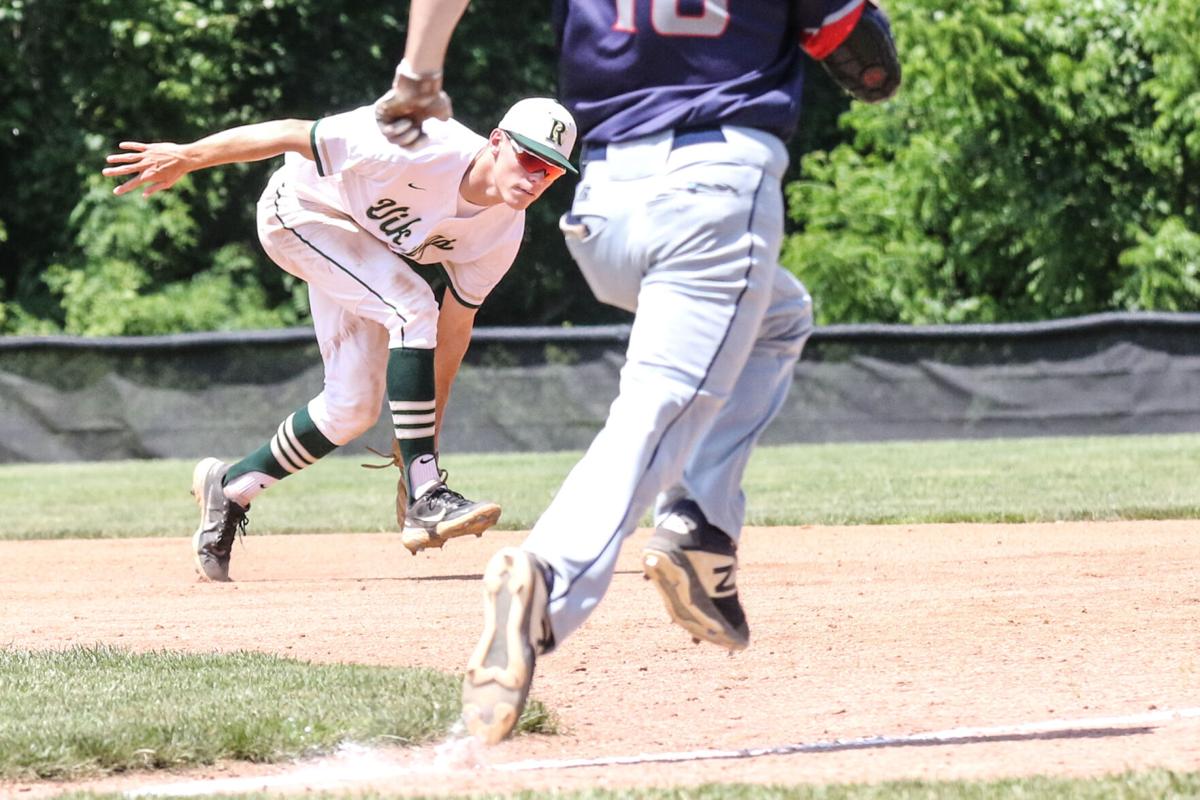 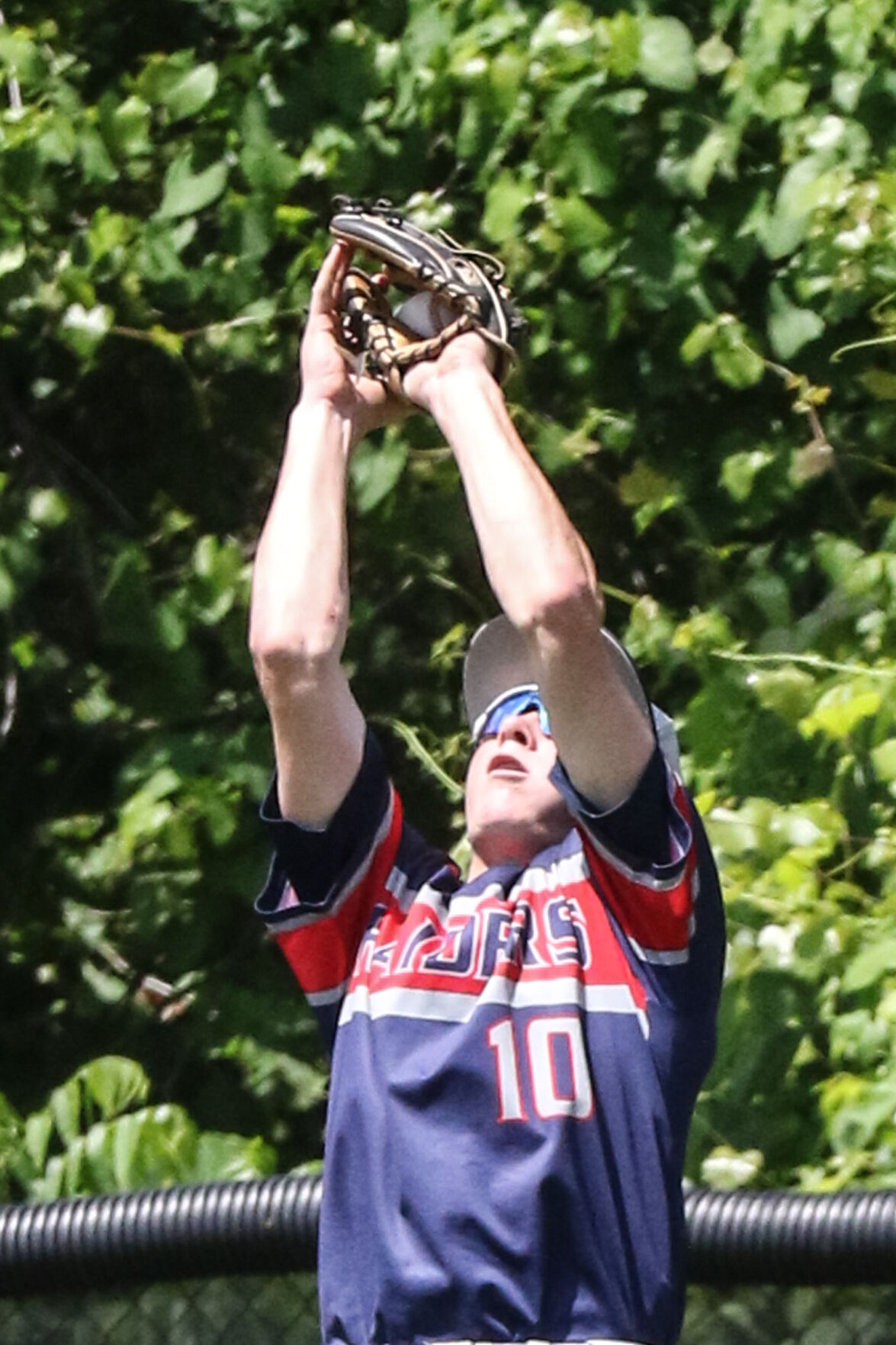 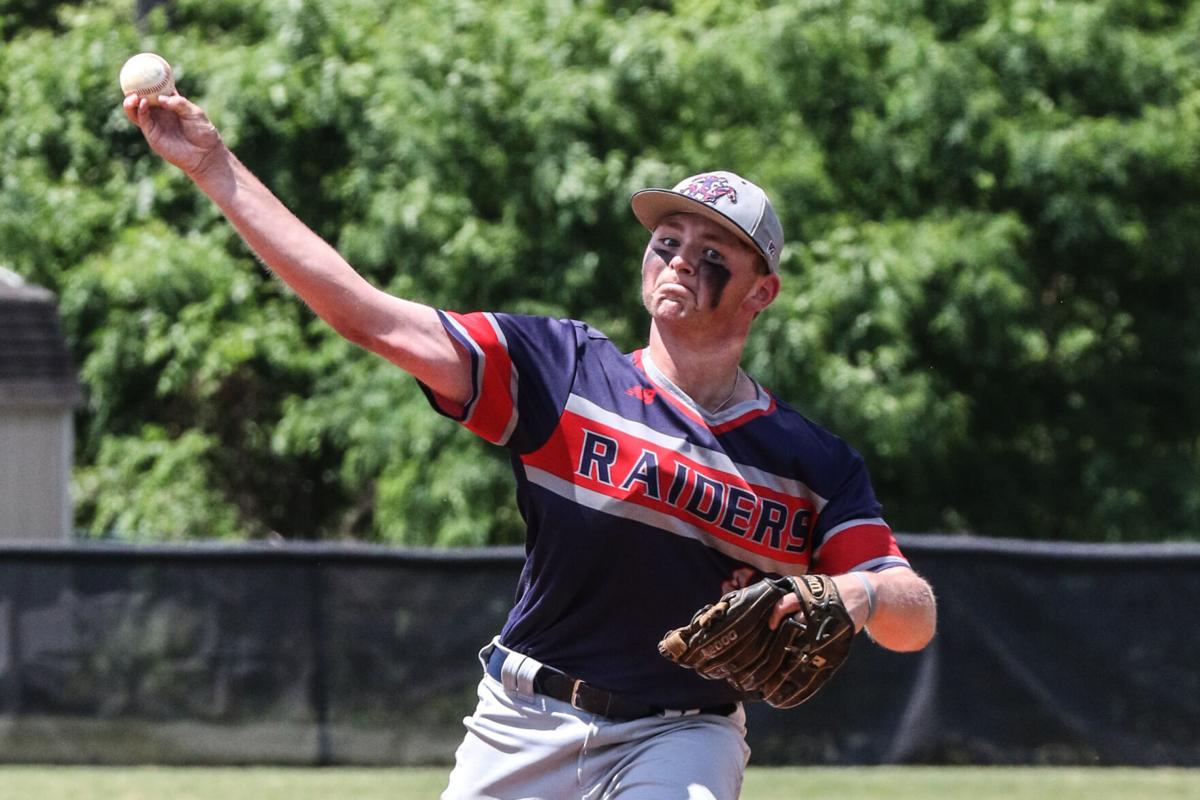 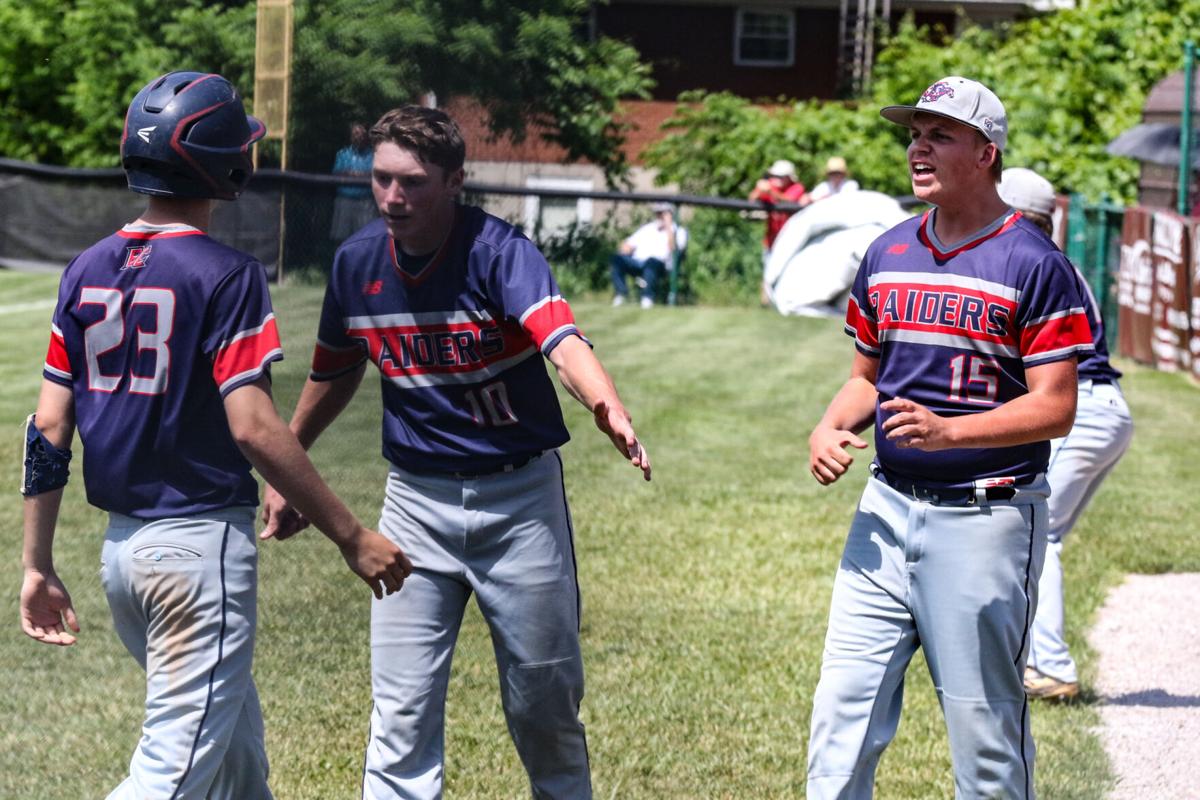 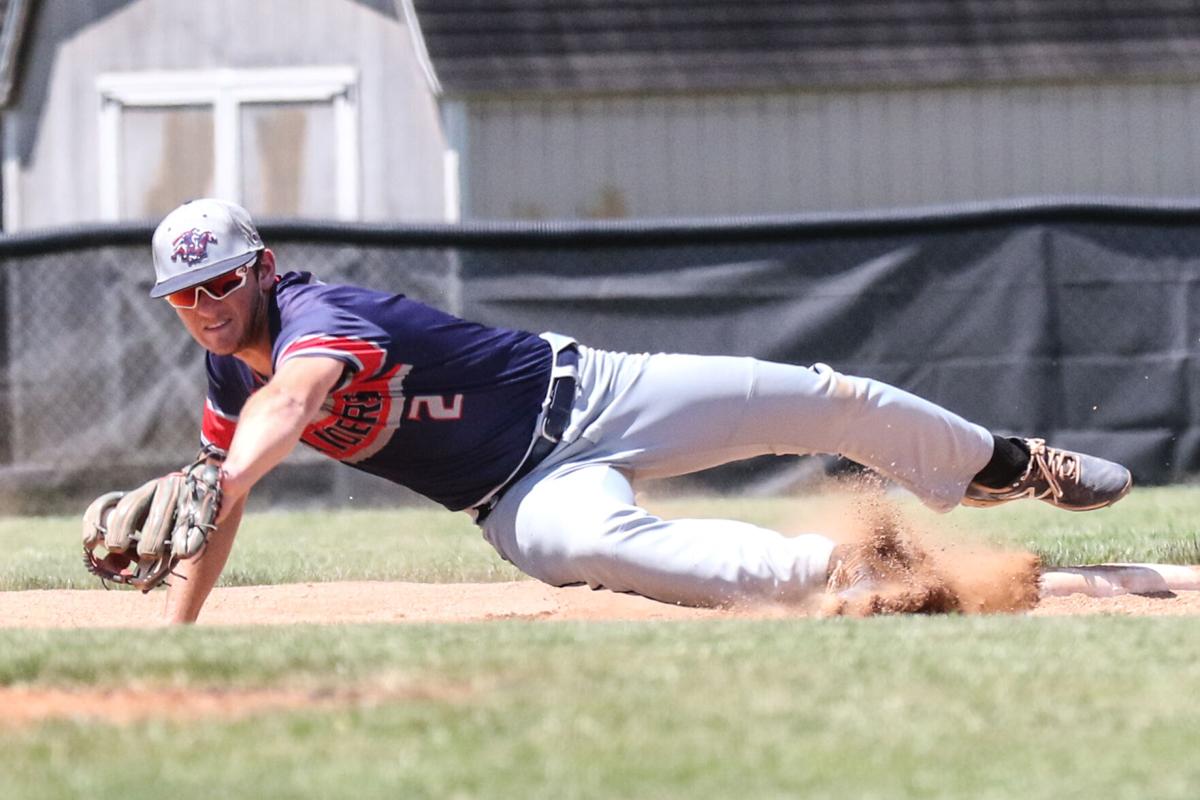 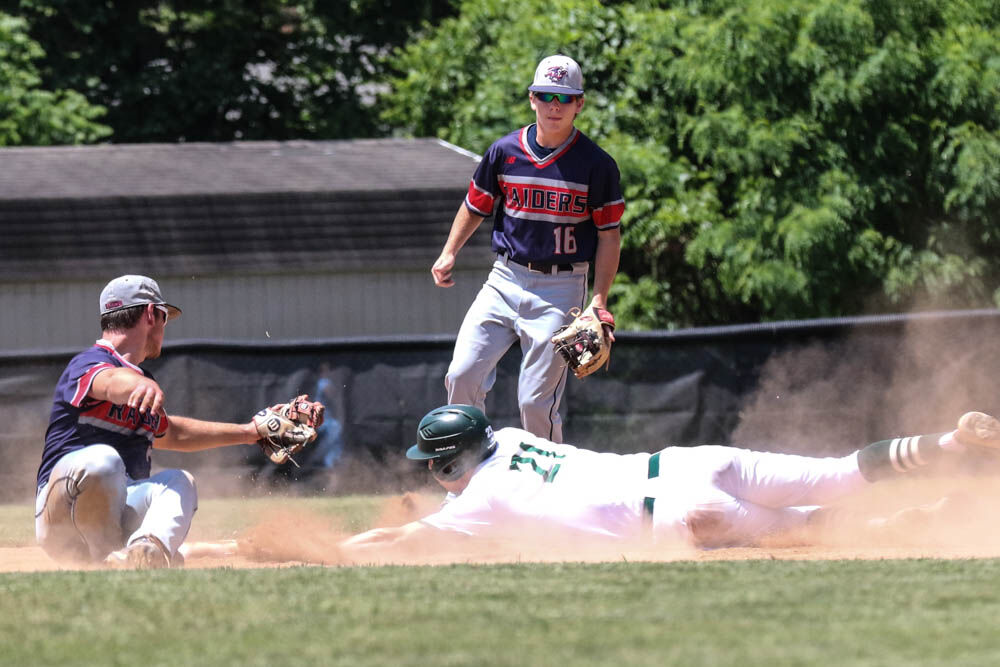 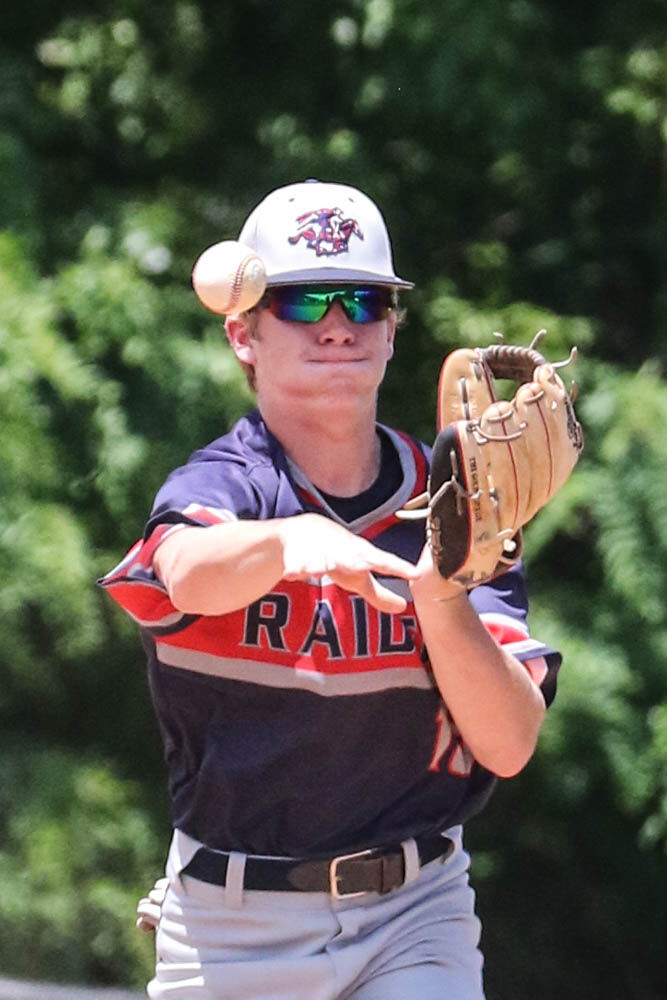 ASHLAND It should be a great weekend in the Tomolonis home as brothers Andrew and Matthew closed out a huge win over region favorite Rowan County, 11-10, in a thrilling opening-round game of the 16th Region baseball tournament.

The Tomolonis brothers navigated the final 3 2/3 innings to save the win for starter Harley Bowen. Matthew, a junior, inherited a bases-loaded jam with the Raiders leading 7-5. The Vikings Nathan Goodpaster hit a rocket that Trevor Cline snagged and stepped on third for inning ending double play.

Andrew, a freshman, recorded three strikeouts in the final frame to thwart a valiant Rowan County rally. He fell behind 3-0 on the game’s final batter but then battled back to end the game with a punch out.

Andrew Tomolonis, who also drove in four runs on three hits, was relieved to get the win.

“We knew they would come back, and we had to keep the same energy the whole game,” Andrew Tomolonis said. “I just try to stay focused and finish the game.”

The Raiders struck early against Vikings starter Hayden Mains with a run-scoring double from Andrew Tomolonis and an RBI single from Cline to take a 2-0 lead. The Vikings took advantage of a Raider error to notch a run in the bottom of the inning.

East Carter scored with no outs as Trevon Tussey reached on a throwing error and a run producing single by Tate Scott to take a 3-1 lead after two innings.

The third inning was huge for the underdog Raiders. Cline drew a walk from mains and Rowan County skipper Scott Collins decided to bring in pitching ace Mason Moore to slow the Raiders momentum.

He was greeted with a triple by Blake Hall that ignited a four-run Raider rally. With two outs, Scott and Connor Goodman delivered back-to back doubles and Raiders found themselves with a 7-1 lead after three innings.

Collins was impressed with the Raiders’ fast start.

“Hats off to East Carter,” Collins said. “They came out ready to play today. We dug overselves a huge hole early in the game. They jumped on Mason, but give credit to our kids, they never gave up.”

Collins never spoke truer words. The Vikings fought back with two runs in the fourth on a single by Jacob Plank to cut the lead to 7-3 after four innings.

The Raiders came back with two more runs off Moore. A single by Treven Tussey and Scott was hit by a pitch to put runners on for Andrew Tomolonis and he delivered with a two-run double to extend the Raider lead to 9-3. The Raiders scored eight runs after two outs in the game.

Raider coach Jeremiah Shearer was pleased with the Raiders approach.

“We had a really good approach at the plate,” Shearer said. “I like how we battled. We talked before the game how all the pressure was on Rowan County. I felt getting those runs early was huge. Once we got the bats rolling, they brought in Moore and it carried over. We barrel up the fastball pretty well.”

The Vikings were far from down despite a six-run deficit. Four straight hits from Aiden Leuenberger, Mains, Plank, and Moore produced two runs and Shearer replaced Bowen with Matthew Tomolonis. A little luck was on the Raiders side as Cline snared Goodpaster’s line shot to record the unassisted double play.

Rowan County (28-7) pulled within 9-7 with two more runs in the sixth. Chase Alderman singled and scored on a Leuenberger hit. A Raider error led to the Vikings seventh run as the game headed to the seventh.

The Raiders (18-9) added two insurance runs in the top of seventh and they would prove to be the difference. Scott drew a walk followed by a Goodman single to put runners on second and third.

The Vikings intentionally walked Andrew Tomolonis. Cline, a sweet-swinging left-handed hitter, lined a two-out single for a 11-7 lead heading into bottom of the seventh.

The final inning had fans on the edge of their seats. The Vikings sent nine hitters to the plate in the final frame. Moore, Chase Furnish, and Goodpaster all singled to cut the Raiders lead to 11-8.

Mains drew a walk to lead the bases. Tomolonis fell behind 3-0 to Plank and recorded the final out with game-ending strikeout.

“We brought in Andrew in because we knew we needed some strikeouts,” Shearer said. “He is the one guy we have that go throw it by people. At 3-0 it looked bleak, but our shortstop (Ethan Tiller) came in to talk to him and composed him. He made three great pitches to get the job done.’

The Raiders’ one through five hitters reached base a total of sixteen times against the Vikings strong pitching staff. Scott and Goodman each reached base four times and Cline drove in three runs for the victors from Grayson.

Shearer feels good about his team heading into Monday’s semifinal with Ashland.

“We feel like our pitching is set up well,” Shearer said. “We have both Tomolonis kids and a couple other options. I think we will be in pretty good shape on Monday.”

Moore ended his stellar career by striking out 10 in relief. He did allow seven runs on five hits after only allowing six runs all season.

Collins was proud of his team despite the season-ending loss.

“We had a great season but obviously your last loss is always your toughest no matter when it is,” Collins said. “I am proud of my kids. I am going to miss our seniors next year, but we have some good guys coming back. At the end of the day, it is not the end of the world.”