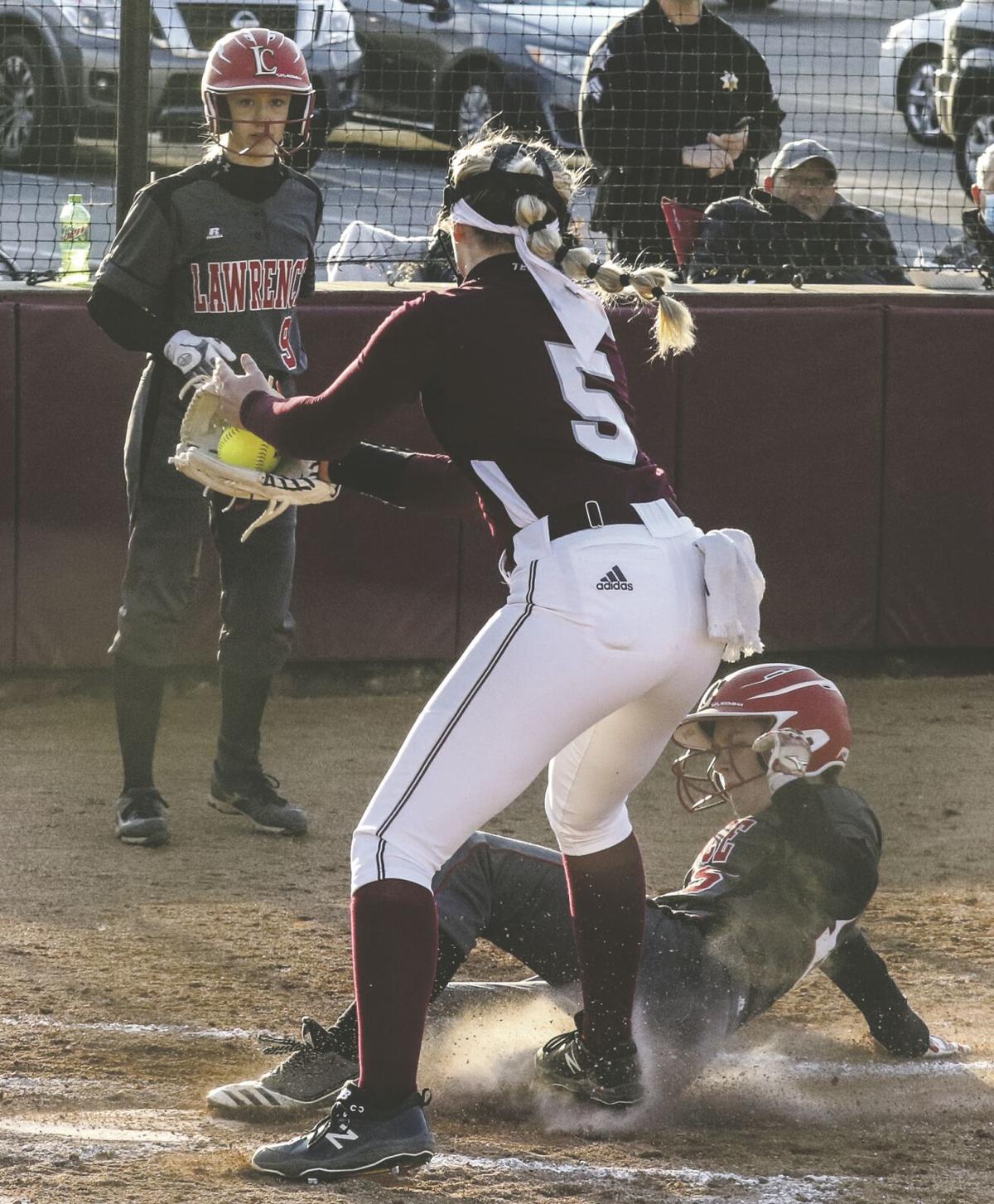 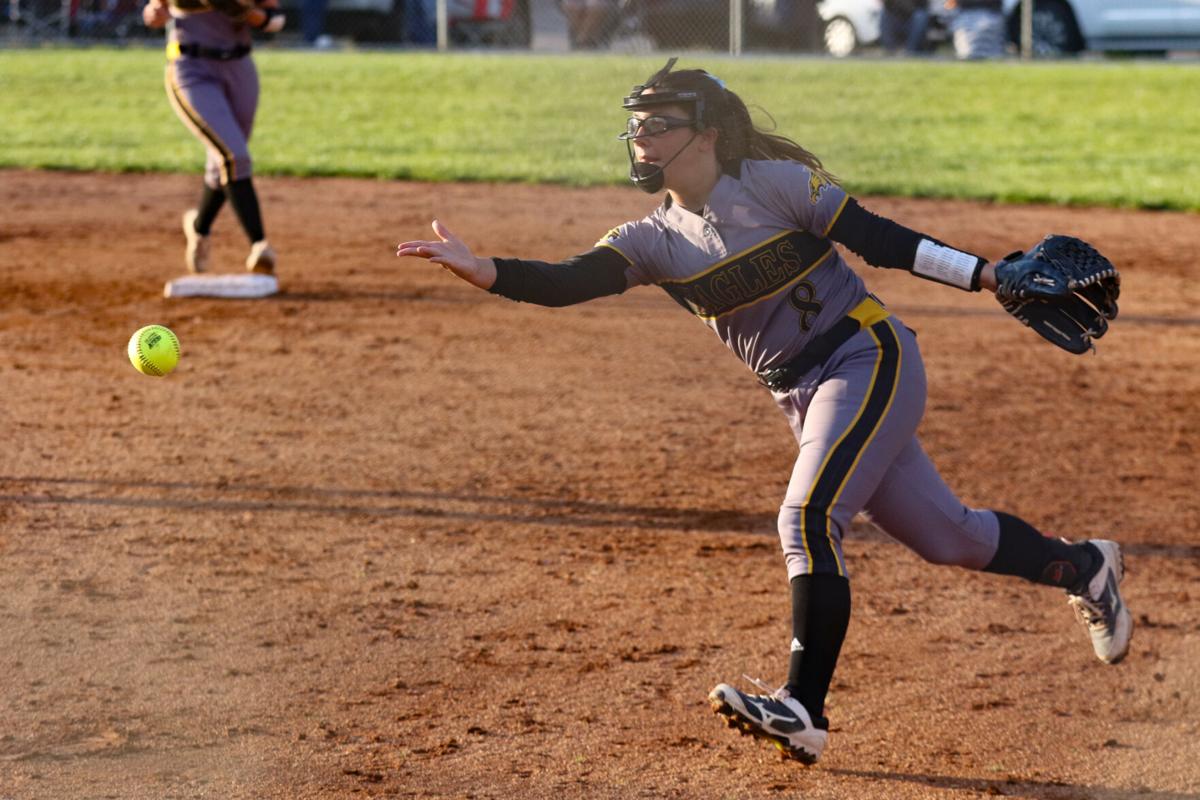 Matt Jones | The Daily Independent Johnson Central’s Claire Gamble tosses the ball to first after fielding a ground ball against Nitro on Friday.

Matt Jones | The Daily Independent Johnson Central’s Claire Gamble tosses the ball to first after fielding a ground ball against Nitro on Friday.

Johnson Central and Lawrence County have each already recorded a signature win in 2021. Both head coaches feel it’s a sign of things to come.

The Lady Eagles and Lady Bulldogs have opened the season with a combined 28 victories. Each has a win over the No. 1 team in Kentucky earlier this year.

Lawrence County has three starters in middle school, Coach Kenny Horn said this is the youngest team he’s had in his nine years at the helm.

Johnson Central defeated top-ranked Warren East on April 5. Assistant coach Craig Delong has taken the reins of the program after Joey Estep took a leave of absence. The win gave the team an early momentum boost.

“I think people started to notice us after that,” Delong said. “I knew where we were at. We thought we were a top-10 team. It put us on the map across the state. It’s hard for an eastern Kentucky team to get recognized. Everybody knows who we are right now.”

Paintsville plays plenty of seventh- and eighth-graders on the field. Keeton said they are a confident group and gaining more experience will help them get through adversity during games.

“They will battle for three or four innings and then maybe have a big error that causes three or four runs,” Keeton said. “You can see it on their face. We have moved a couple people around on defense. They are seventh and eighth-graders. They’re very skilled but they’re just not ready yet.”

The Lady Eagles are ranked No. 17 in the latest KSCA poll. Delong said the team is swinging the bat well. Johnson Central is averaging nearly eight runs a contest in its first 16 games.

The club has five players hitting .400 or better. Sophomores Randi Delong and Emily Adkins both tout a .500 average and have combined for 16 home runs. Delong is high on the state list with 10 long balls.

“We are very deep offensively,” Craig Delong said. “We’ve always been good at the plate. We have a pretty good offensive lineup.”

“The biggest key so far has been our pitching,” Delong said. “Chloe VanHoose is our senior leader. She started the season with an 8-1 record. She doesn’t throw it hard, but she can spin it. She changes speeds well and is very difficult to hit.”

Maddie Vaughn and Adkins each have four starts in the circle, and both have three pitching wins.

“She wants the ball,” Delong said of VanHoose. “She is not afraid of anything. Chloe goes out there and takes on any challenge. She is always ready to go. She knows how to pitch to batters and how to control her pitches. It’s been huge for our younger pitchers. They throw a little harder than she does, but Chloe is capable of doing anything she wants in the circle.”

Randi Delong will play first base. Claire Gamble and Jadan Bowling will both occupy second and are very good defenders, according to their coach.

Kendal Hall has returned to her shortstop position. She is solid at the plate and with the glove. Clara Blair is at third base and Johnson Central’s cleanup hitter.

Abigail Williams has adapted well to left field after playing previously in the infield. Adkins and VanHoose will rotate in center field depending on who is in the circle. Savannah Holbrook and Macy Conley will be in right field.

Mayson Delong handles the catching duties behind the plate.

Warren East did not fare any better against a hungry group of Lady Dawgs two days later. Freshman Danielle Crum crushed a walk-off home run in the eighth inning to lift Lawrence County to a 5-4 victory on April 7.

“They stuck to the game plan,” Horn said. “They were prepared for the game. We knew what they did, and we made some adjustments. We played clean and error-free. When you do that, it always gives you a chance to compete against a team like that. With a young team, they don’t know who or what anybody is yet. They just go out and play. They weren’t afraid that night.”

“We were up, 3-1, going into the seventh inning,” he continued. “They took a one-run lead into the eighth. Gracie Preece, an eighth-grader, doubles into the gap in left-center. Danielle Crum is a name to remember. It was a storybook ending. As a kid, you dream about that moment.”

Horn said the team leans on the leadership of Kensley Feltner. She is an elite scorer on the basketball court, but when she steps on the field, the energy of the Lady Dawgs rises to a new level.

“The one thing she does is play hard no matter what she is doing,” Horn said. “She gives you everything she has got, and that stuff rubs off on a young team. It can have a huge impact on how we perform and how we practice.

“Two hours after her basketball season was over, she was wondering when she can start practicing softball. She is a ferocious competitor. Every time she lines up on the field, you know you have a chance to win because she makes plays.”

The Lady Bulldogs have plenty of capable arms. Horn does not have a set rotation and names the starter based on the opponent.

Seventh-grader Taylor Blevins and freshman Shelby Blevins have seen time in the circle. Emma Salyers is out with an injury. Sophomore Allie Triplett has big-game experience.

“Allie Triplett pitched all eight innings against Warren East,” Horn said. “Triplett is my No. 1 pitcher. She has a lot of experience. She was 17-3 the last year we played. She has ice water in her veins, and she does not get rattled. I play her everywhere. She is a player that every team needs.”

The Lady Tigers do not have a junior or senior on their roster, but they do have plenty of young talent that can handle the bat.

Keeton said the team has focused on getting more experience against varsity pitching. The team has four starters that are still in middle school.

“We are working on our hitting,” Keeton said. “If we see pitching in the low 50s, we’re OK with that. But once we get into the high 50s, there are still some that are not ready for that level.”

Two freshman pitchers, Laney Bledsoe and Chloe Hannah, will get the majority of innings inside the circle this season. Both hurlers sport a low ERA at 2.40 and 1.88, respectively.

“They’ve got to have some defense behind them and we’re still searching for that,” Keeton said. “We want a winning season. With pitching, we go from one game to the next. Laney is the one that throws harder. Hannah is more of the primary pitcher right now.”

Ashley Wells and Taylor Hannah have taken more of a leadership role, but the young club will still experience some growing pains along the way.

“Two of my best players are Ashley Wells at shortstop and Taylor Hannah at catcher,” Keeton said. “Taylor had a great game against Lawrence County. Both are kind of quiet. Taylor can be a little more of a leader but with no seniors or juniors, coaches have to do a little more of that.”

Abby Maynard and Maggie Music can play multiple spots in the infield. Carrigan Ratliff and Music are both good hitters. Chessa Collins has the potential to be a really good player, according to her coach. Rachel Roberts and Wells will also play pivotal roles in the Lady Tigers’ success.

Coach’s outlook: “So far, we’ve performed how I expected,” assistant coach Craig Delong said. “We still have aspirations for a region title and compete at the state level. I think everyone on our team looks for that every year. I think we have the talent to do it.”

Coach’s outlook: “With our younger players, a lot of it was just understanding the system ball and do the work we do every year in the offseason. We want to get stronger both physically and mentally and work on the fundamentals. They have been in every game. I just love their attitude and they're really gritty. They've got a lot of guts about them. You can't coach that kind of stuff.”

Coach’s outlook: “We like our little bunch. I know most softball teams in the area are young. We have no seniors and no juniors. We know that we will get off to a slow start. We're not one of the top three or four teams in the region. We keep working on it every day. We still think we can be a good team in May.”