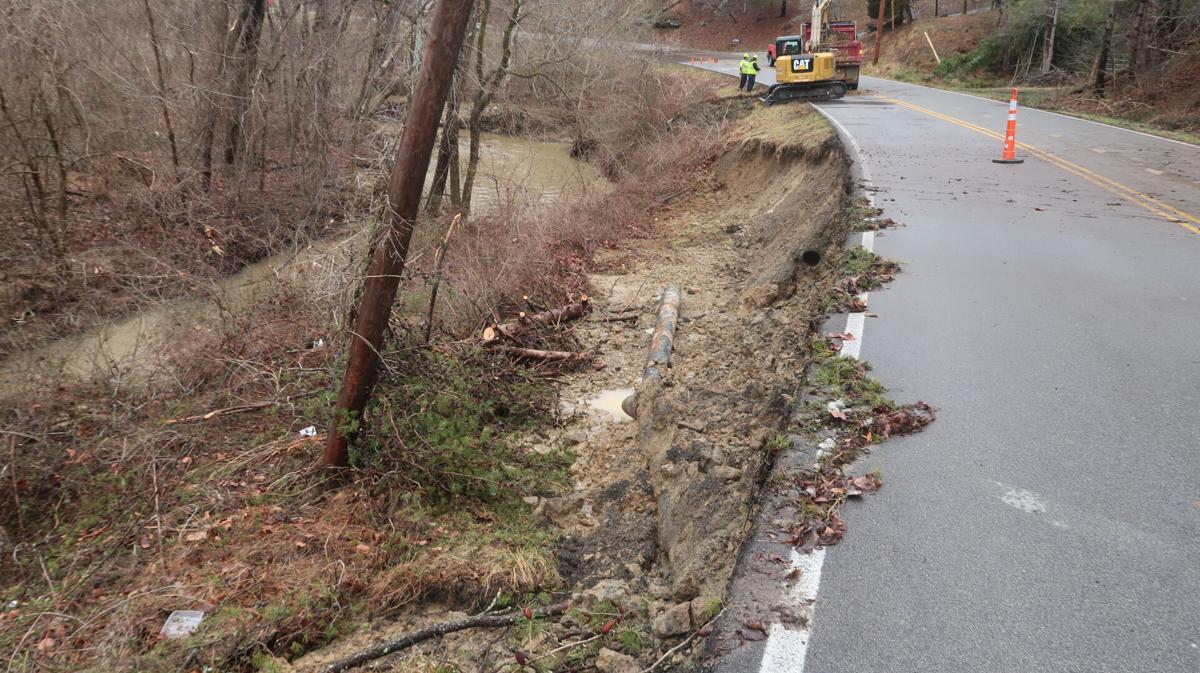 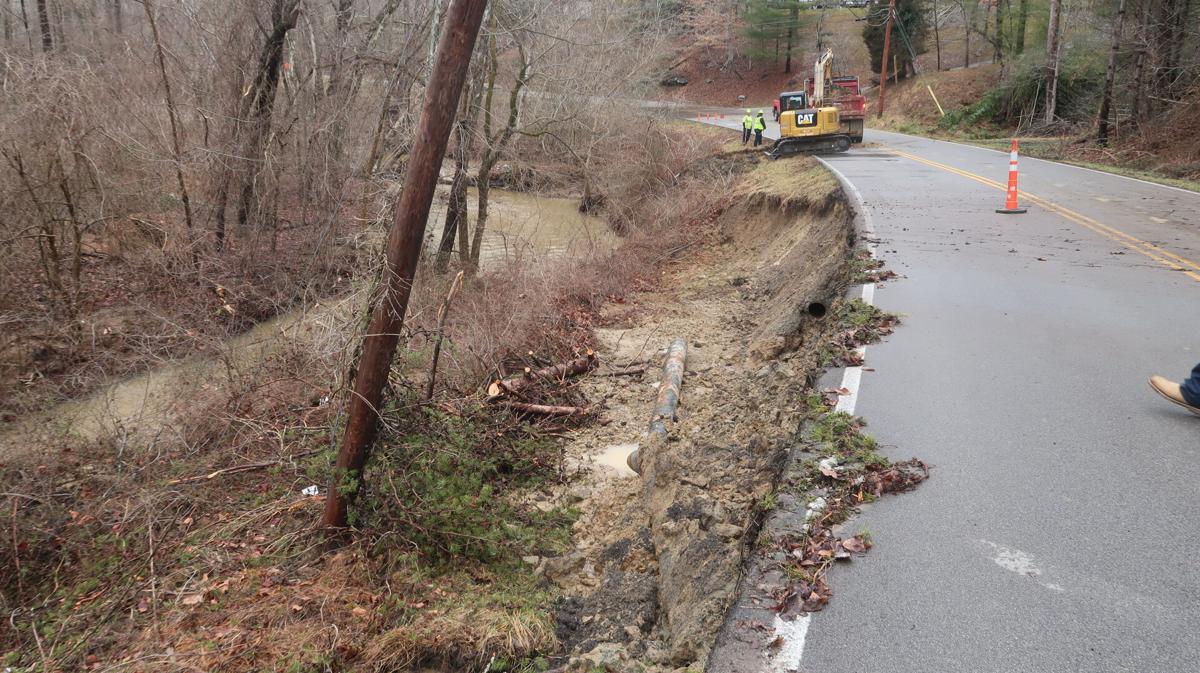 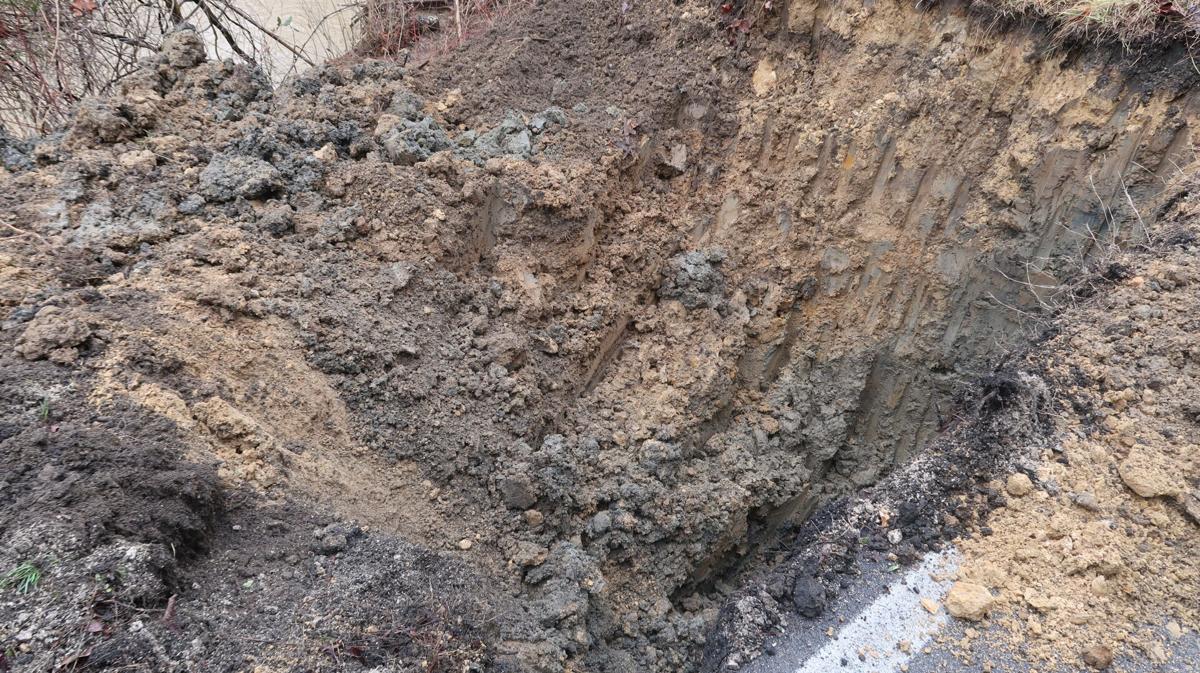 CATLETTSBURG About 750 water meters may run dry this afternoon due to an early morning pipe break on Valley View Drive caused by flooding.

Reed Downs, superintendent of water distribution in the City of Ashland, said the line located at the bend of the road serves the main water tank for the City of Catlettsburg. Downs said crews are working hard to have water restored by early Tuesday.

About 140-150 feet of 12-inch line needs to be replaced, with a portion of it needing rerouting from the creek side of the road to the underneath the ditch line on the hill side.

According to Downs, the water line bust is the result of a series of events. When crews were clearing the roads from the ice storm, the tree limbs were tossed into the ditch. The drastic thaw caused the ground to loosen up a bit, then Sunday’s rain was the cherry on top, according to Downs.

“The water filled up in the ditch because of the trees, then went across the road and washed out the creek side of the road,” Downs said. “They had to cut and toss the trees like that so they could open up the roadway.”

Of course, when the pipe buckled, it sprayed out the rest of the bank, according to state road’s spokesman Allen Blair. He said engineers inspected the scene and are working with the city on road repairs once the water line issue is resolved.

A good 20-yard section of pipe lay exposed Monday morning. When asked if his crews dug that out, Downs shook his head.

“That’s the rain,” he said. “This road right here is ready to buckle.”

In addition to water loss, AEP had to cut the power to some lines on Valley View Drive in order to provide safe conditions for the water crews. As it stands right now, the poles are right next to the where the water line is.

Lucky for Downs and his men, the gas line isn't in the area they’re digging, he said.

“That’s one silver lining,” he said.

This is the first major pipe bust since the ice storm — Downs said all weekend, everything was quiet.

“Heck of a way to start a Monday,” Downs said.

And it might be a long one, too — Downs said he’s currently searching for joints to hold the high pressure line together. Calling up distributors around the region, the closest one he’s found so far is in Richmond ... Virginia.

“We're working hard to get this back and up running,” Downs said. “I’m hoping with everything drying out this week, this will be the only one we have.”

As far as roads are concerned, Blair said he hopes the area will be spared from more slips — so far, back log from the waters is flooding out roadways, but only one other minor slip has been reported.

"We thank our customers for their patience as our water distribution crews fix this significant water line break caused by the recent weather phenomena," Graese said.