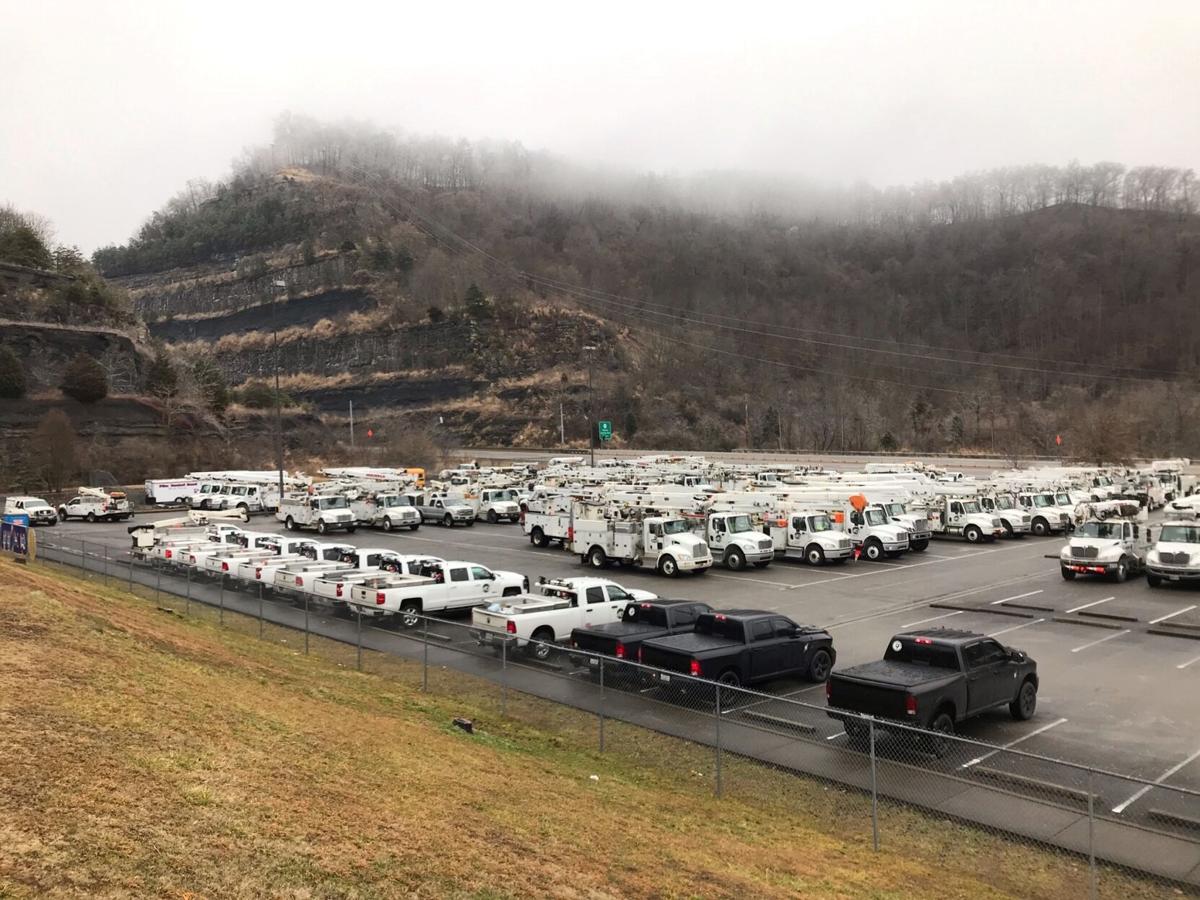 Crews from Illinois are staged at Pike Central High School. An extra 300 line workers, for a total of about 1,600, were brought to the area to help with power restoration from the second ice storm to move through Kentucky Power’s territory. 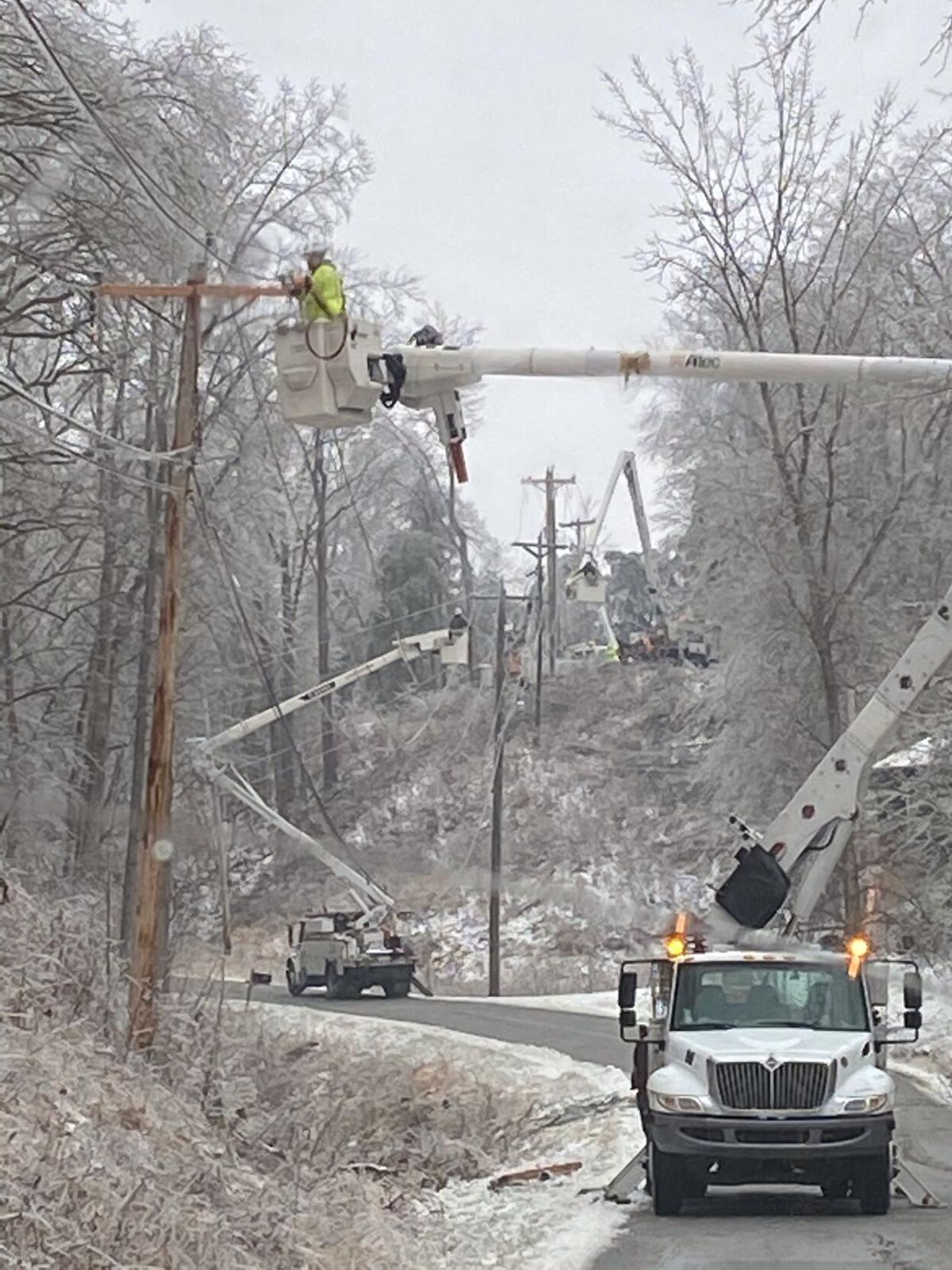 Crews from Illinois are staged at Pike Central High School. An extra 300 line workers, for a total of about 1,600, were brought to the area to help with power restoration from the second ice storm to move through Kentucky Power’s territory.

The latest wave of winter storms has left in its wake a devastating number of power outages in our area.

According to Kentucky Power, there are 58,000 AEP customers without power — 4,000 of those customers are from the original storm on Feb. 11.

A second storm hit Monday, bringing a mixture of ice, sleet and snow blanketing the entire Kentucky Power service territory, according to an AEP press release.

In Boyd County, 16,000 AEP customers are without power.

Around 1,600 line employees, foresters and assessors are in place to restore service, according to AEP. Customers should prepare for a multi-day outage, according to the release.

“Today’s focus will be working on multiple transmission outages which is the backbone of our system,” AEP stated in its release. “From there, crews will also focus on wrapping up restoration from the previous storm, clearing hazardous situations and restoring essential services such as hospitals and water systems and conducting damage assessment so repairs can begin. Roads are blocked by trees and very icy in some areas so travel conditions will hamper today’s efforts.”

Grayson Rural Electric, the power cooperative which serves Carter, Elliott, Greenup, Lawrence, Lewis and Rowan counties, showed 9,700 customers out of power at 6 a.m. on Tuesday, Feb. 16. Outages can be tracked on their website at outages.graysonrecc.com, with information that updates every two minutes.

The Carter County Sheriff’s Office released a statement on Monday that Carter County had been placed in a State of Emergency, and urged all residents to stay off the roads.

The City of Grayson has reported widespread outages, prompting the Carter County Emergency Management to release a statement at around 10 p.m. Monday saying the city had lost power. The notification urged residents to bundle up until the damages could be repaired, and call 911 in the case of emergency.

Kentucky District 9 released a statement at 6 a.m. Tuesday advising residents that many area roads remained impassable and that travel was not advised. All roads at that time were considered slick and hazardous. Though the heavy sleet and snow had stopped, crews were still working to remove fallen trees from roadways and were being assisted by extra chainsaw crews from the Kentucky Division of Forestry and contractors working alongside plow crews.

Along with downed trees, low temperatures and ice were also hindering efforts, and motorists are being advised to stay off the roads for their own safety, as well as the safety of working crews.

Greenup E911 Director Buford Hurley said early Tuesday morning that the outages were being assessed, and planning has begun to open warming centers throughout the county.

“It is going to be a long day for sure,” Hurley said,  as crews and first responders throughout the region attempt to respond to widespread emergencies and issues throughout the county.

Ashland City Manager Mike Graese said the city is working closely with AEP to address any issues regarding power to the city’s water pump. So far, Graese said water has been good — no pipes have burst nor have any customers reported water losses.

This story will be updated.