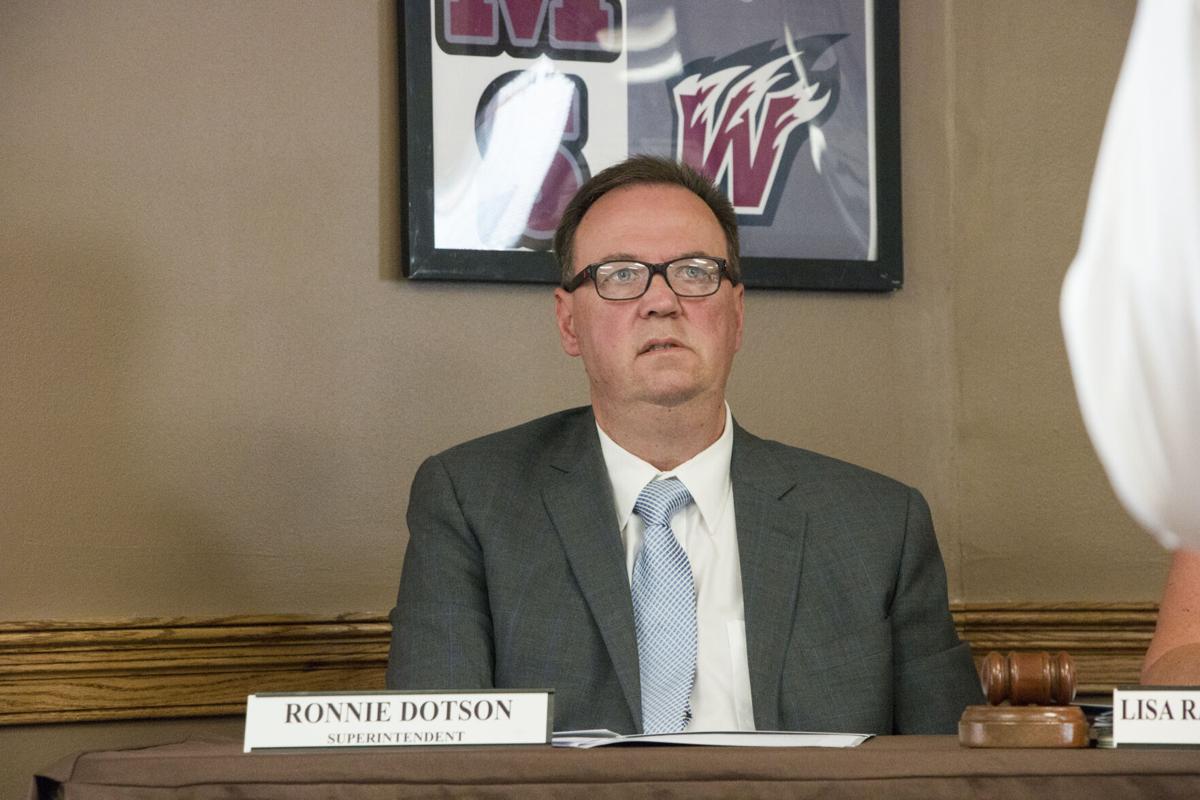 Superintenent Ronnie Dotson listens to what will happen following his resignation during a board of education meeting Friday. Emily Porter | The Daily Independent 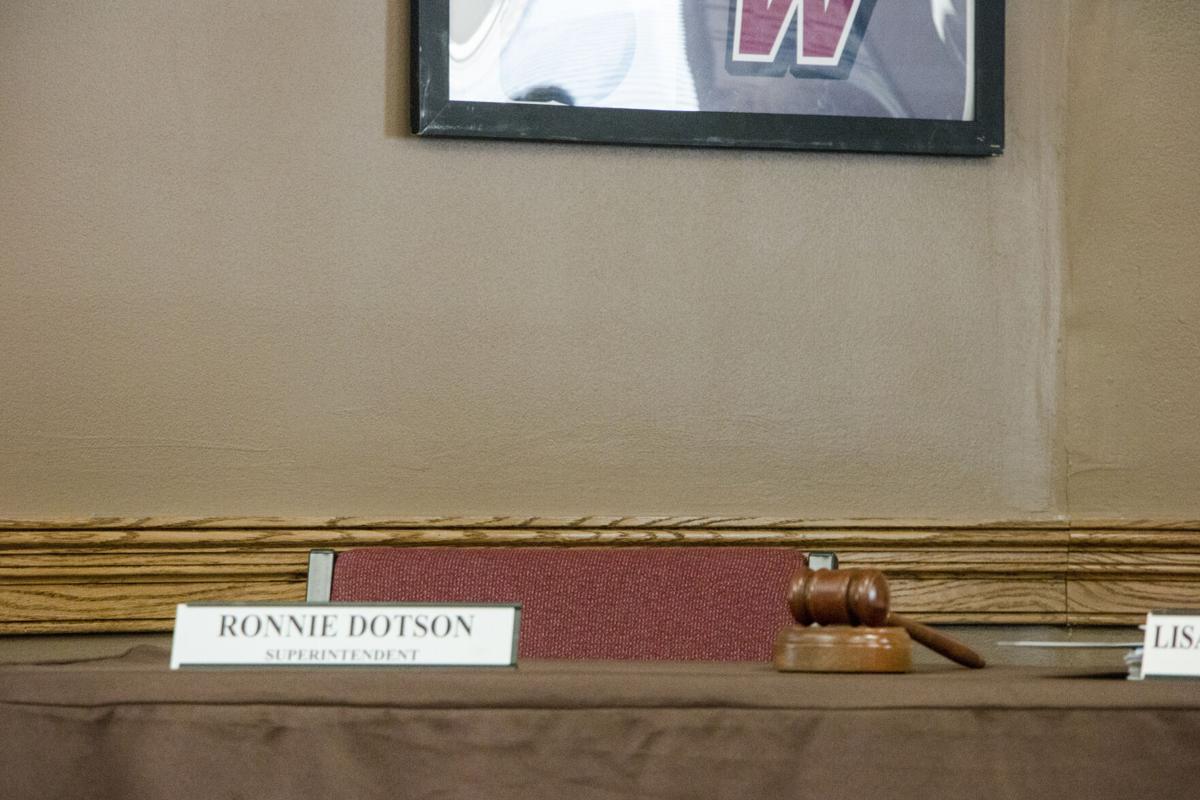 Ronnie Dotson’s chair left vacant after he departed the board of education meeting concerning his resignation. Emily Porter | The Daily Indepedent

Carter County Board of Education learns about the policies and procedures of hiring a superintendent from KSBA Field Consultant Don Martin. Emily Porter | The Daily Independent

Superintenent Ronnie Dotson listens to what will happen following his resignation during a board of education meeting Friday. Emily Porter | The Daily Independent

Ronnie Dotson’s chair left vacant after he departed the board of education meeting concerning his resignation. Emily Porter | The Daily Indepedent

Carter County Board of Education learns about the policies and procedures of hiring a superintendent from KSBA Field Consultant Don Martin. Emily Porter | The Daily Independent

GRAYSON Ronnie Dotson has resigned from his post as Superintendent of Carter County Schools for the second time this summer. The Carter County Board of Education officially accepted the resignation and retirement during a special meeting Friday night.

Dotson’s resignation will go into effect Sept. 1, and his retirement will follow on April 1, 2022. Dotson clarified to a questioning parent that he is being paid according to his contract for days he has already earned. Dotson said he had accumulated 150 days over the course of the decade he has been in the role, which is more than enough to get him to retirement.

Dotson originally resigned in early June, and spoke with The Daily Independent June 8 about the decision. Dotson said his son, Jacob, who is a pharmacist, had taken a position in Hilton Head, South Carolina, and he was resigning to follow him.

His decision was listed on Board of Education meeting minutes for the June 21 meeting, along with the resignation of his daughter-in-law, Megan Dotson, from Upper Tygart Elementary School.

On June 30, The Daily Independent published that Dotson had rescinded his resignation and would stay for the next year. Dotson was a bit hesitant to say if he would resign at the end of the year, but confirmed he would not stay past the rest of his contract, which had two school years left.

His wife, Judy, had served the school district in the role of Instructional Supervisor — a role that was not without question and led to an investigation by the Office of Educational Accountability based on KRS 160.380(2e) which states a superintendent’s spouse must have eight years of service in order to be employed in the school district.

Judy Dotson was listed in the July 19 board meeting as retiring effective Aug. 1. She was recognized by Ronnie Dotson and Lisa Ramey-Easterling, chair of the Carter County Board of Education, during the July regular meeting.

Dotson explained the board had not voted to accept his resignation, though it was listed on the June 21 meeting agenda. The Daily Independent attempted to contact then acting-chair Ramey-Easterling for confirmation and comment. She was contacted via phone call, text message, email and Facebook. The Daily Independent received no response from the board member.

The board chair adamantly pressed the issue of being open and transparent with the public continually over the course of the meeting. Ramey-Easterling refused to answer questions posed by The Daily Independent following Friday’s meeting seeking clarification on the process and insight into what has taken place over the past two months. Ramey-Easterling’s only comments were to say Dotson never technically resigned the first time as he rescinded the resignation prior to board action.

She commended him on his work and said she appreciated his efforts.

Eighteen minutes into the board meeting, Dotson patted Board Attorney Gary Conn on the shoulder, whispered to the attorney, and then he and his wife Judy left the building. Dotson could be seen from the board conference room driving away.

Dotson did not return phone inquiry from The Daily Independent Friday night.

Dotson listed his Grayson home for sale on June 28, but pulled the listing. The home, located near the Little Sandy River, was reposted on realtor.com Tuesday afternoon. Dotson had not yet resigned again from the Carter County School District.

The Daily Independent first obtained Dotson's address from an application by Dotson that was posted for a superintendent position in Florida in 2017. The address was confirmed via annual report filings with the Secretary of State for Cornerstone Care Associates, PLLC, of which Ronnie and Jacob Dotson are both listed as members.

This is not the first time Dotson has had one foot out the door of Carter County.

Dotson was a finalist on multiple boards’ lists. News outlets reported Dotson withdrew his application for one reason or another, or the outlets only followed up with the name of the person who was ultimately selected to fill the seat in the corresponding district.

As for the district, they will have help from Kentucky School Board Association Field Consultant Don Martin who outlined the process and procedure for the board Friday.

Martin will help the board name an interim superintendent. The board’s timeline is aggressive and they look to have a new chief by Nov. 1 or close to that day.

A public hearing will be held on Aug. 9 at 6 p.m. with a location to be determined. The hearing will allow the public to voice the qualities they’d like to see in a superintendent. The board will also send out a survey for comment.

The board agreed that they want to conduct the process well and not rush, but want to fill the role with a full-time superintendent as soon as possible.

Board Member Kirk Williams said he didn’t want the district “to be in limbo.”