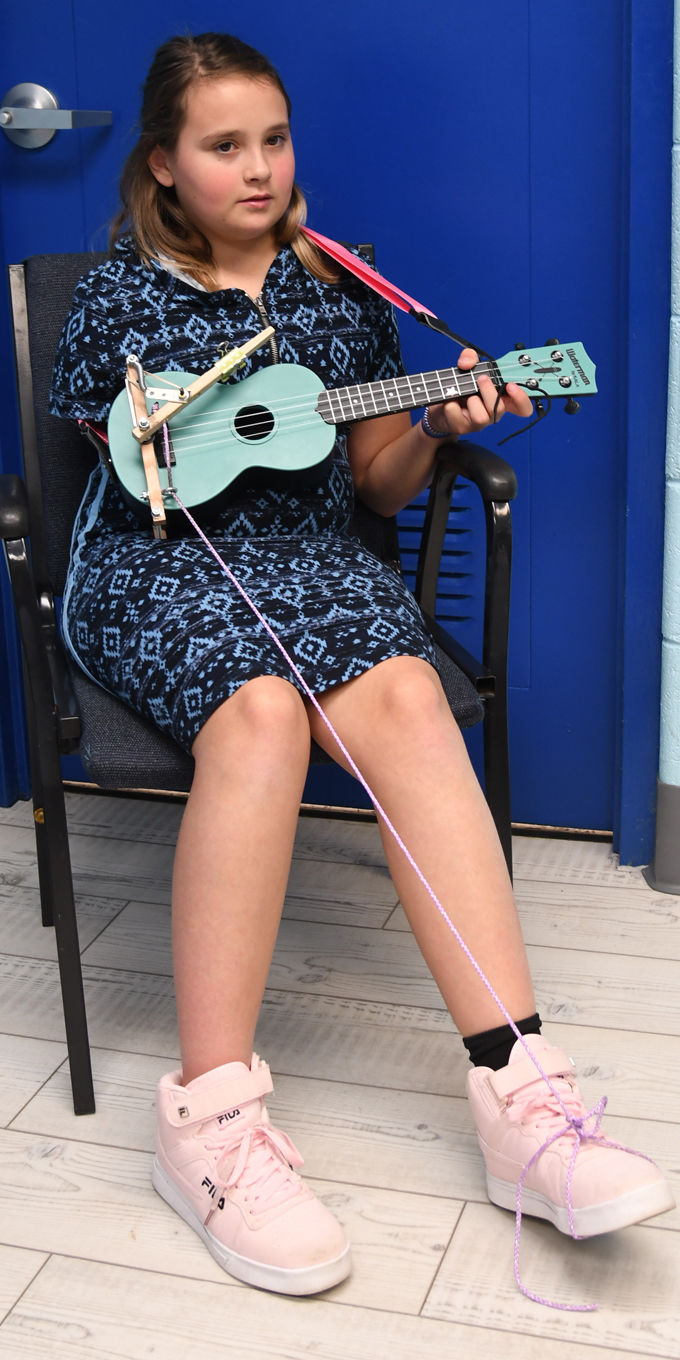 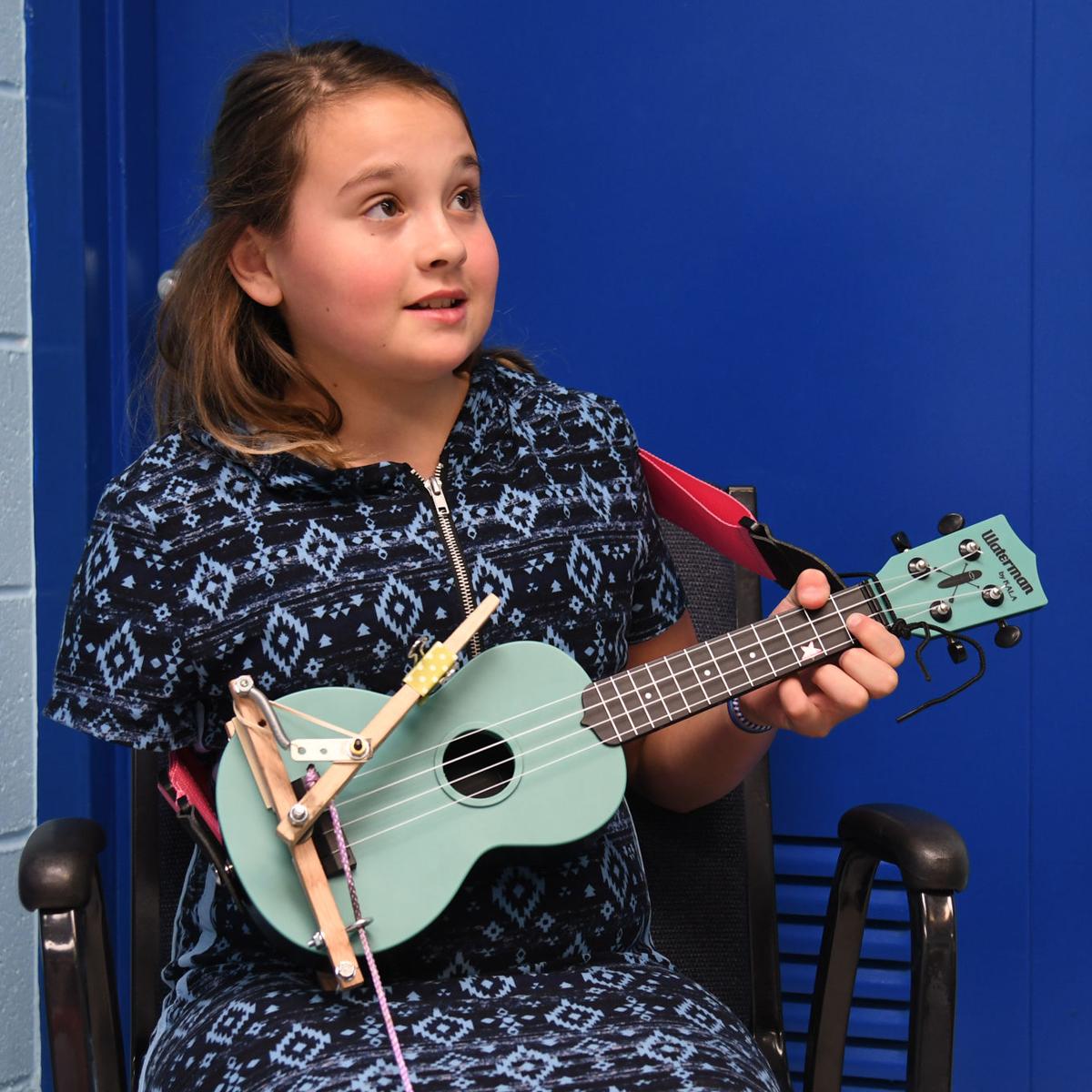 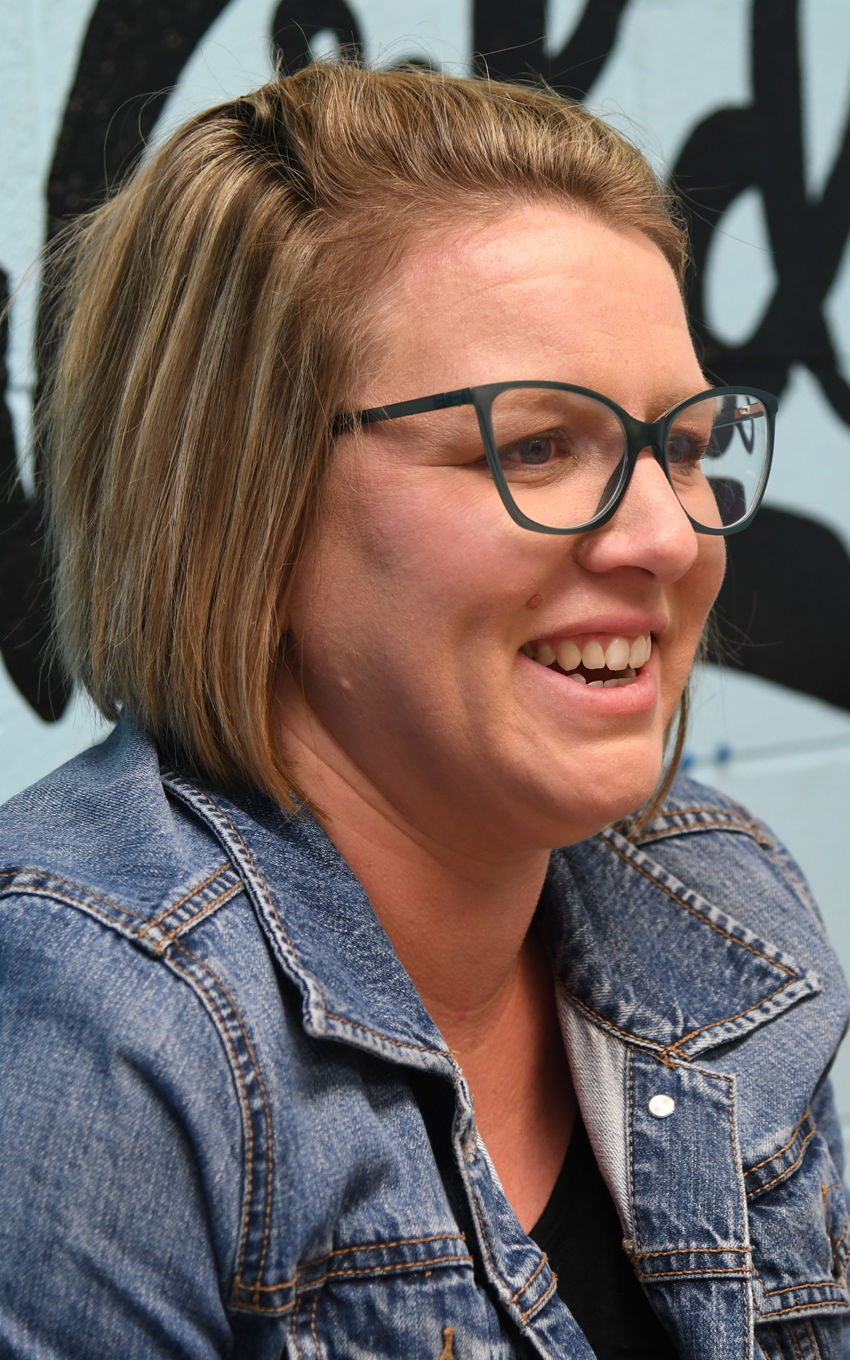 Poage Elementary teacher Amanda Hicks help with getting a device made for Savannah Griffith to be able to play the ukulele. KEVIN GOLDY | THE DAILY INDEPENDENT 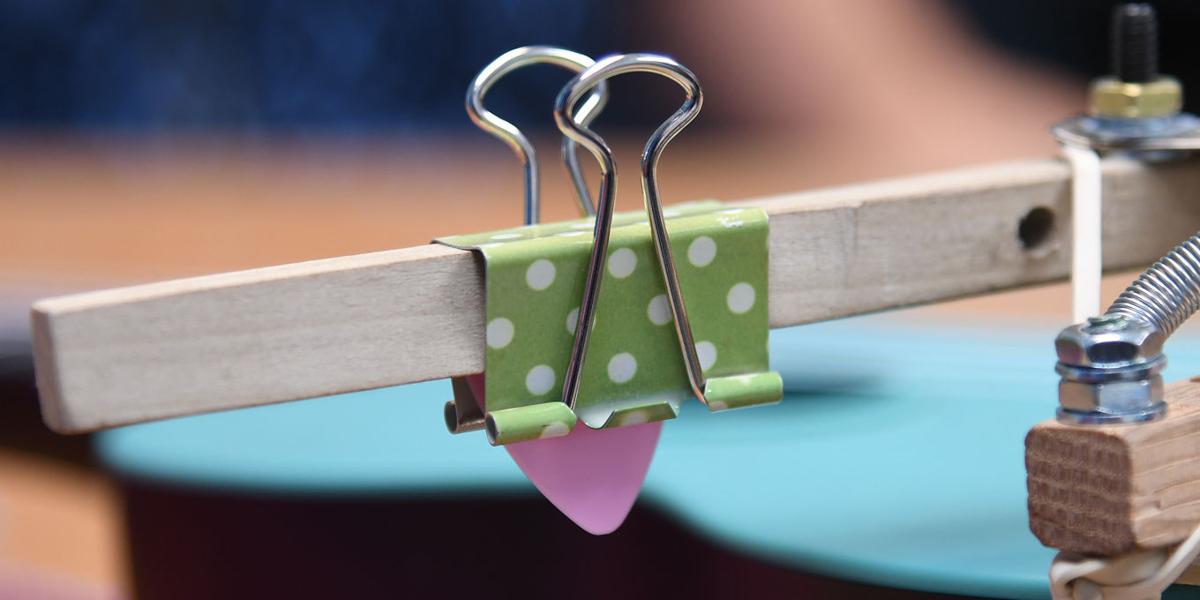 A binder clip holds a pick in place on the device that allows Savannah Griffith to play the ukulele. KEVIN GOLDY | THE DAILY INDEPENDENT 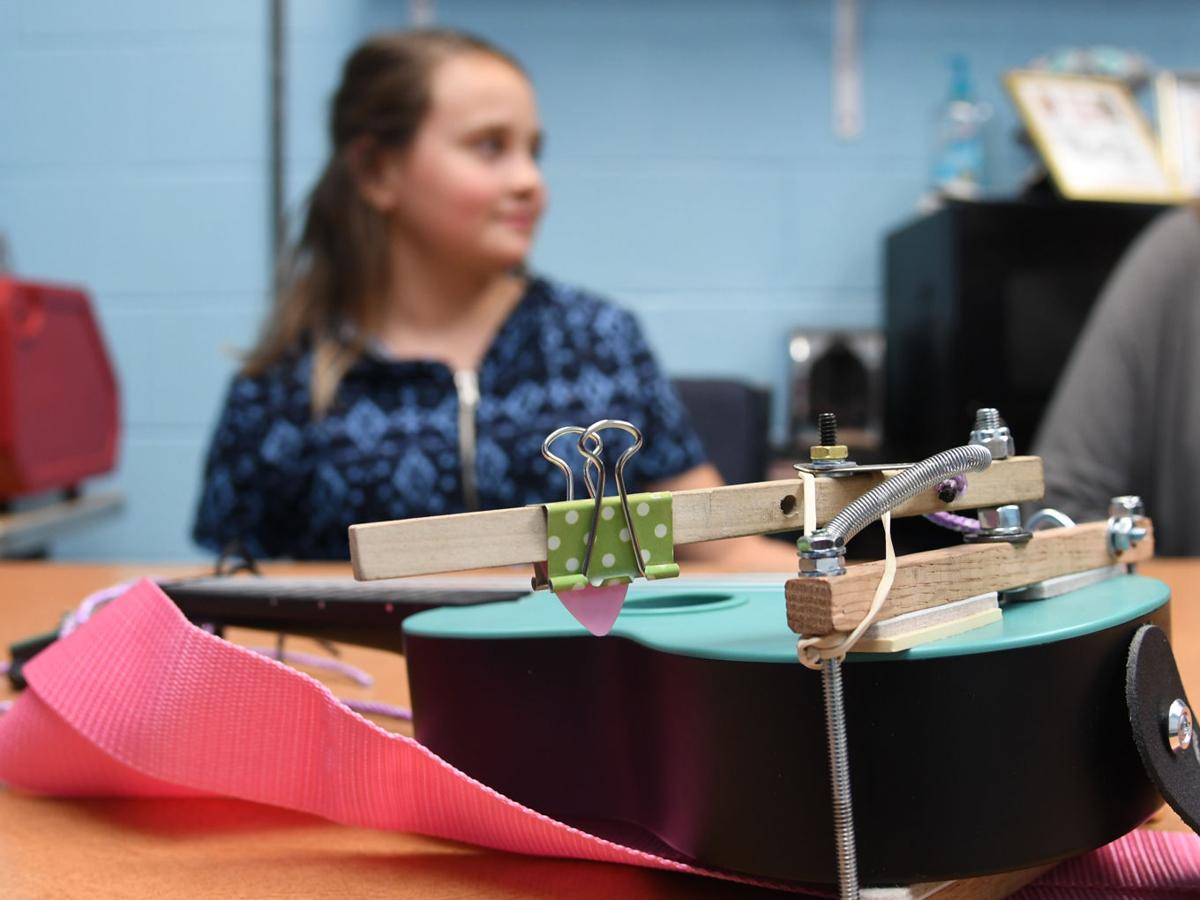 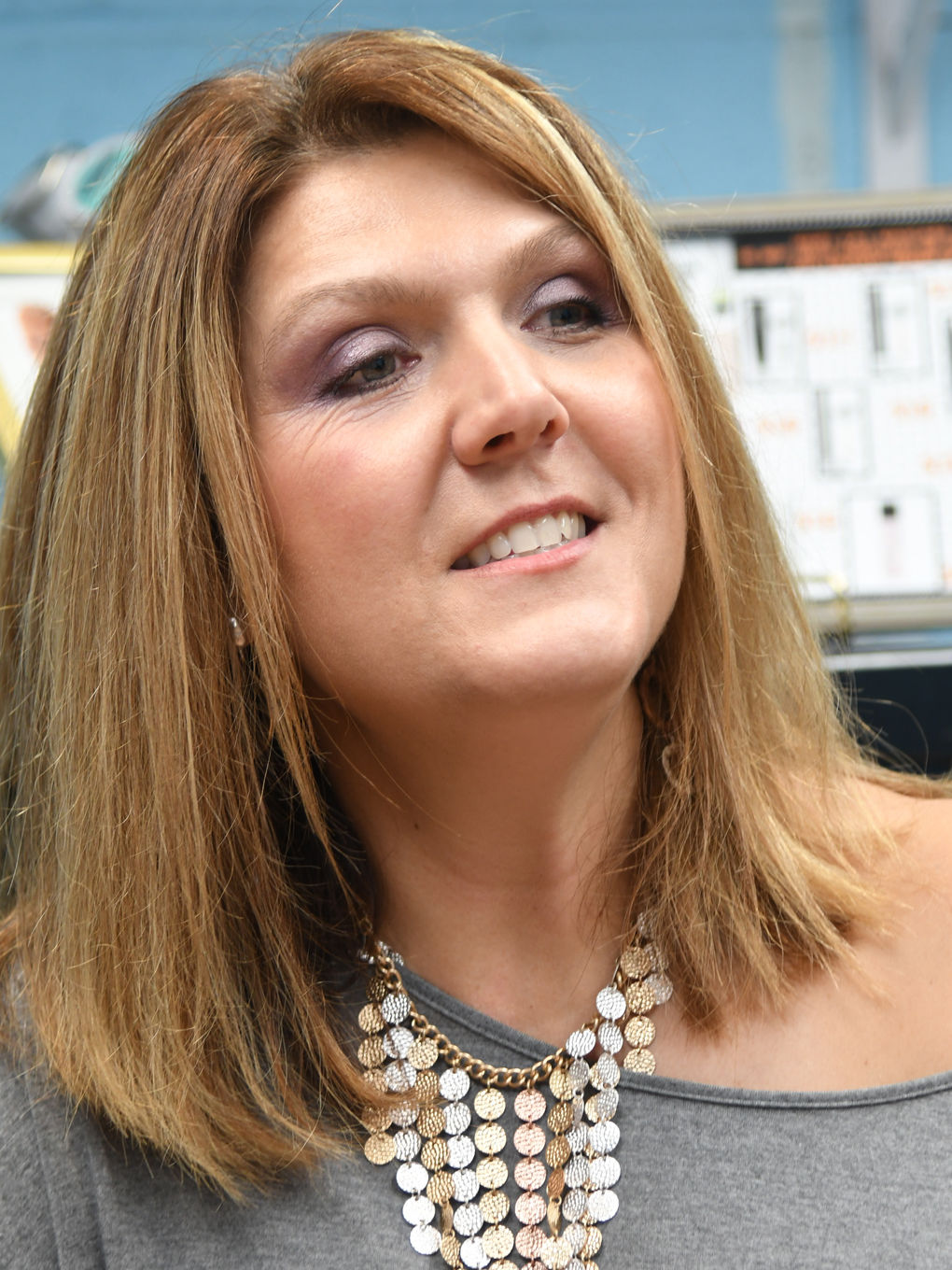 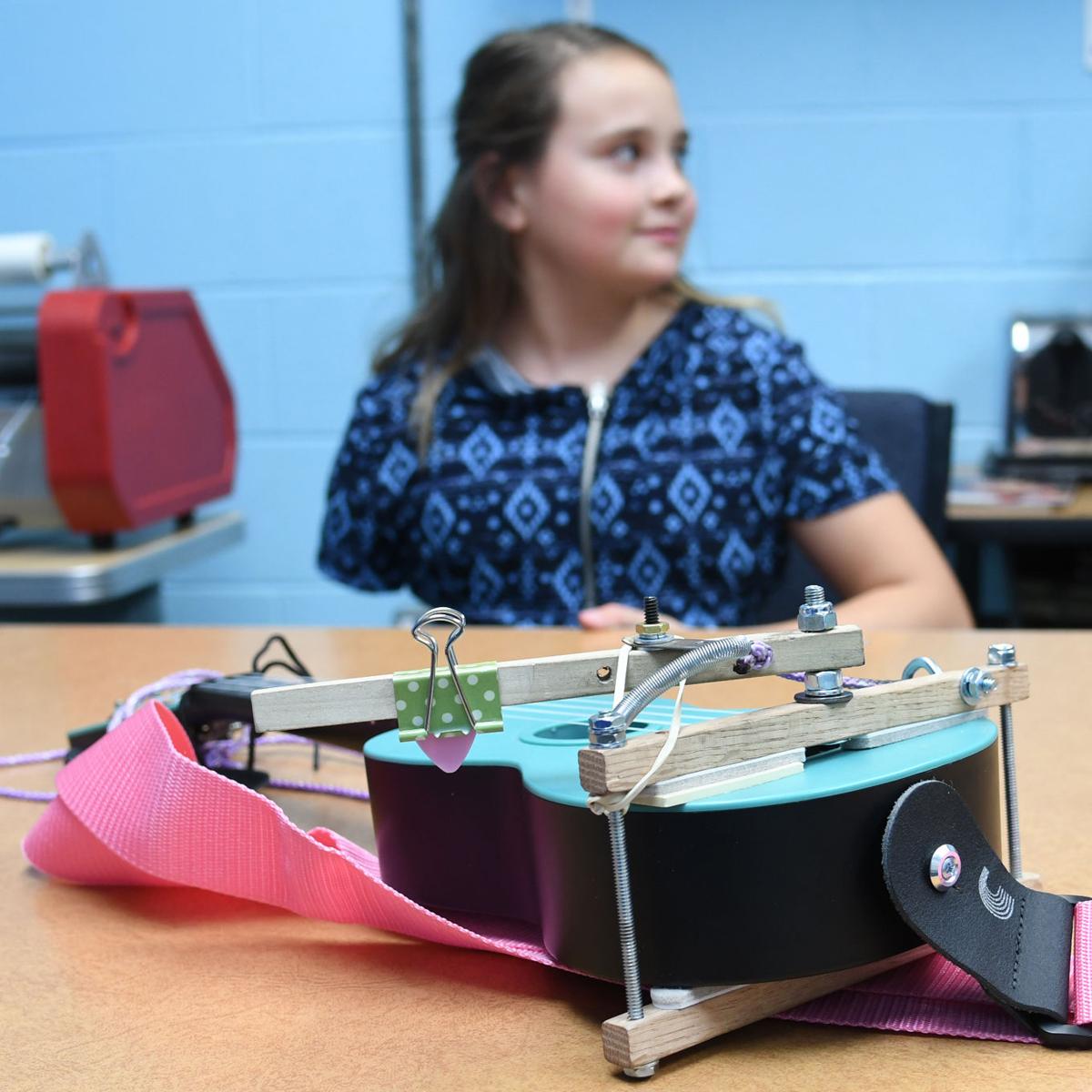 Poage Elementary teacher Amanda Hicks help with getting a device made for Savannah Griffith to be able to play the ukulele. KEVIN GOLDY | THE DAILY INDEPENDENT

A binder clip holds a pick in place on the device that allows Savannah Griffith to play the ukulele. KEVIN GOLDY | THE DAILY INDEPENDENT

ASHLAND Having only one arm hasn’t stopped Savannah Griffith from swimming, playing soccer, volleyball and basketball, cheering and shooting at the range with her dad.

She wasn’t about to let it stop her from playing the ukulele.

Savannah is in fifth grade at Poage Elementary School, and at Poage, fifth grade is when kids learn to play ukulele in music class.

She could manage the fretboard with her left hand, but that left her unable to strum the strings. She was frustrated. Savannah may have been born without an arm, but she substitutes for it with an independent streak. She has always hated asking for help, her parents say.

Nickie French, her music teacher, understood Savannah’s dilemma and called on other music teachers for a solution. Through a teachers’ group, she found plans for a device Savannah could use to strum the instrument using her foot.

Savannah’s fifth-grade teacher Amanda Hicks got wind of the idea and volunteered her husband Zack to build it.

A week ago, Hicks brought the device to school and Savannah saw her with it in the hall. Once she knew it was for her, she couldn’t wait to try it out. “You could see it in her eyes  that she was ready to try it out,” Hicks said.

So they walked into the cafeteria, where Savannah’s first impromptu session brought her an audience. “When I got to play it in the cafeteria, everybody surrounded me and all day people were asking me questions,” she said.

The device is simply crafted from three square lengths of wood each a bit larger than a pencil, a few nuts, bolts and washers and a spring.

Two of the wood components clamp the device to the uke and the third forms an arm that pivots on a bolt.

A clip holds a guitar pick to the arm; a cord attached to it threads through an eyelet and loops around Savannah’s foot. Bobbing her foot pulls the pick across the strings and strums out the music and the spring pulls it back for the next chord.

Savannah is pleased with the device, because it permits her to join with her classmates in their lessons.

Her parents are pleased too, and a bit surprised, because Savannah has a history of refusing to use assistive technology. “It’s the first time she’s been willing to let someone do for her,” said her Gayla Ball, her mother. “That spoke loudly to me, that she really wanted to do this, to play the ukulele. She doesn’t want to be different, but she loves music so much.”

Researching and building the device was typical of Poage’s culture of inclusion and community, according to Hicks. The school always rallies behind all its students to meet their needs, she said.

Savannah’s mother hopes her daughter will use her ukulele to set an example for others. “It’s an opportunity for her to be able to help other people with challenges or who just need motivation . . . they can see her play and think, ‘I can do it.’”

Ed Harper, 50 died Friday. Funeral services will be Tuesday at 1 p.m. at Malone Funeral Home. Burial will be in the Sagraves Family Cemetery. Friends may call Tuesday 11 a.m. until service. malonefuneralhome.com

Ronald Lee Conley Sr., 79, of Ashland, passed away Saturday, Jan. 25 in King's Daughters Medical Center. He was born March 27, 1940 in Ashland, Kentucky, a son of the late Cecil Clayton Conley and Mary Oliver Conley. In addition to his parents, he was preceded in death by a grandson, Eric Al…