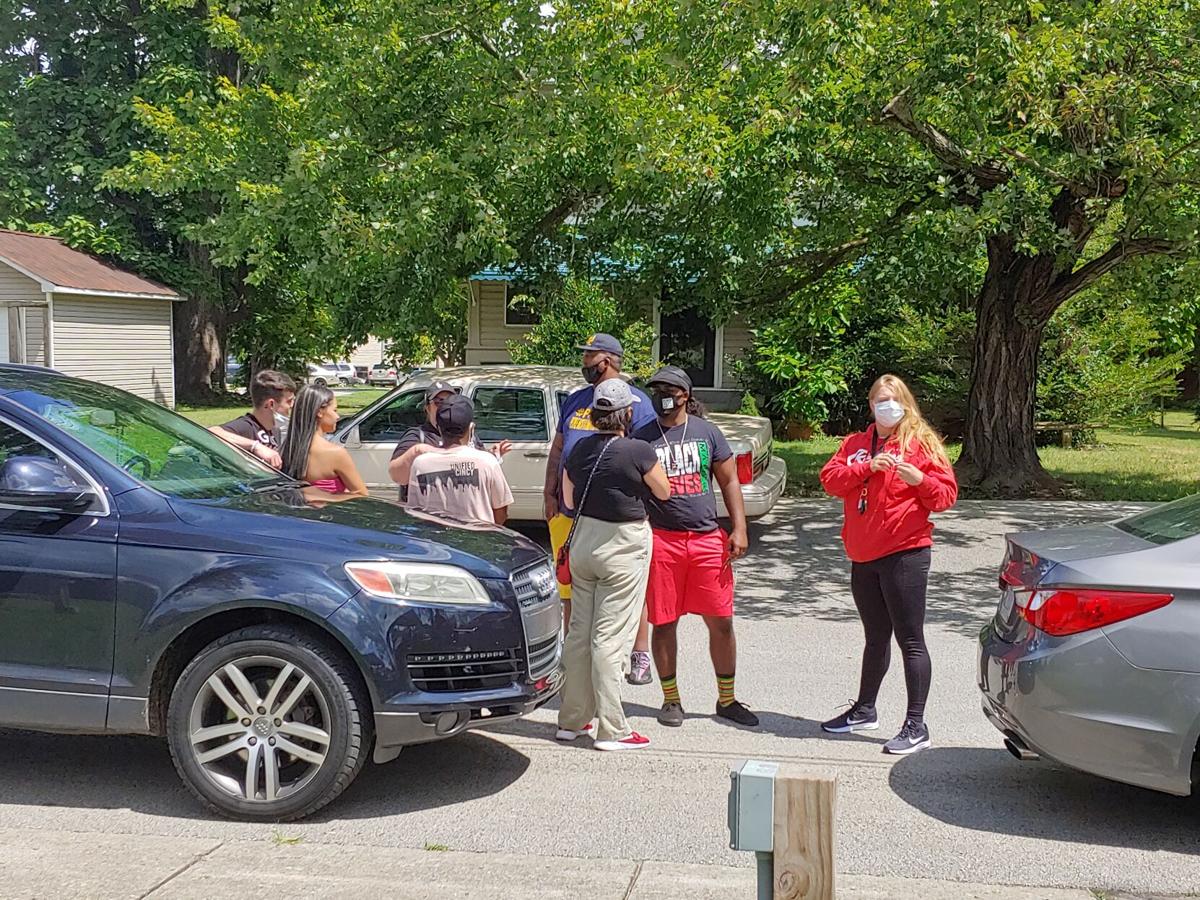 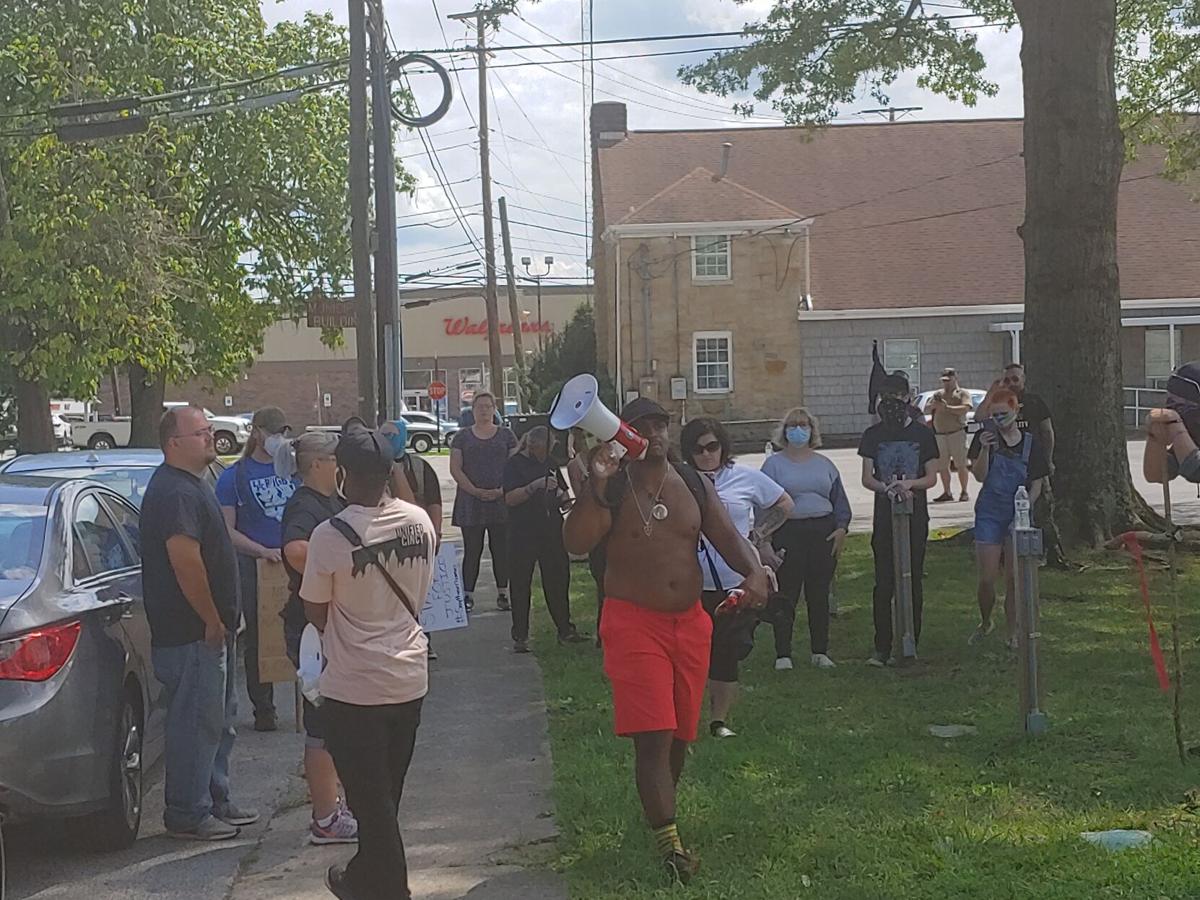 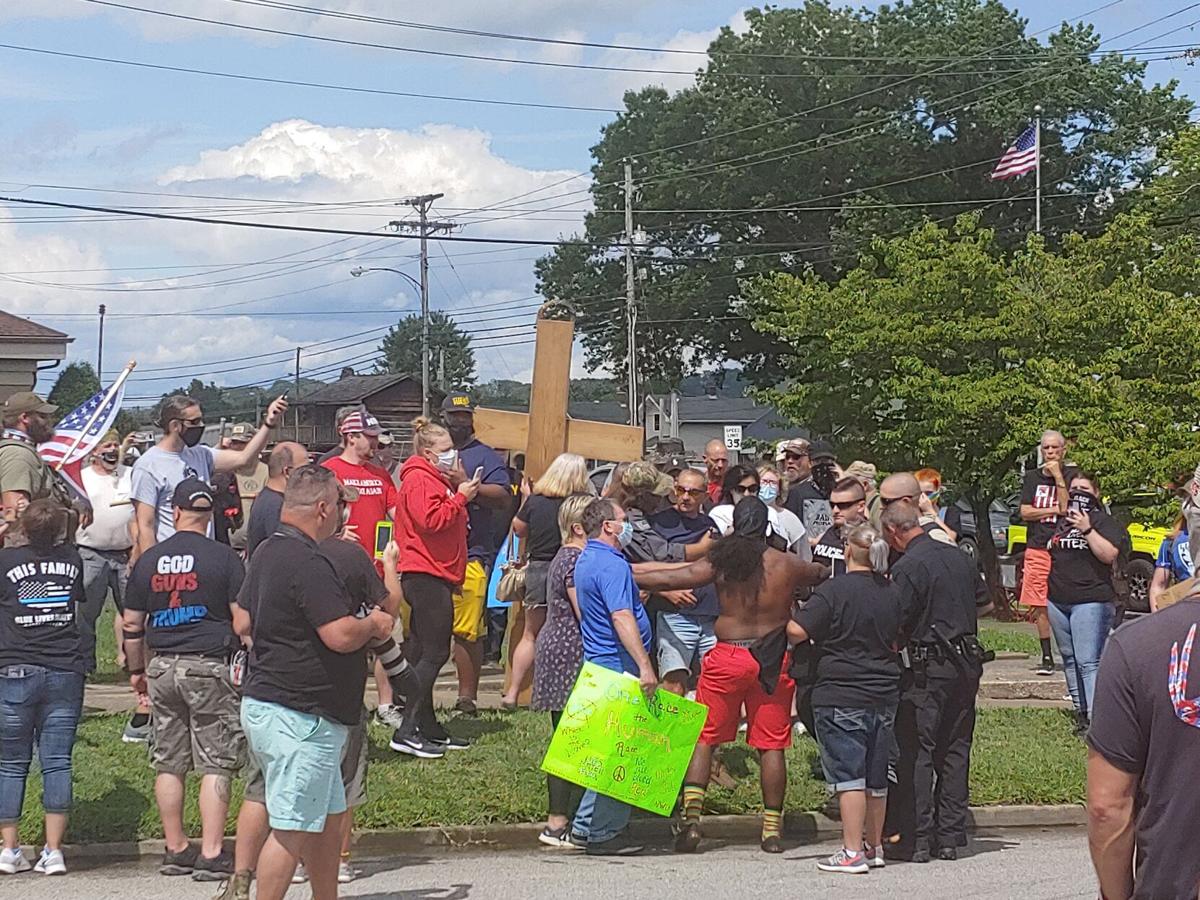 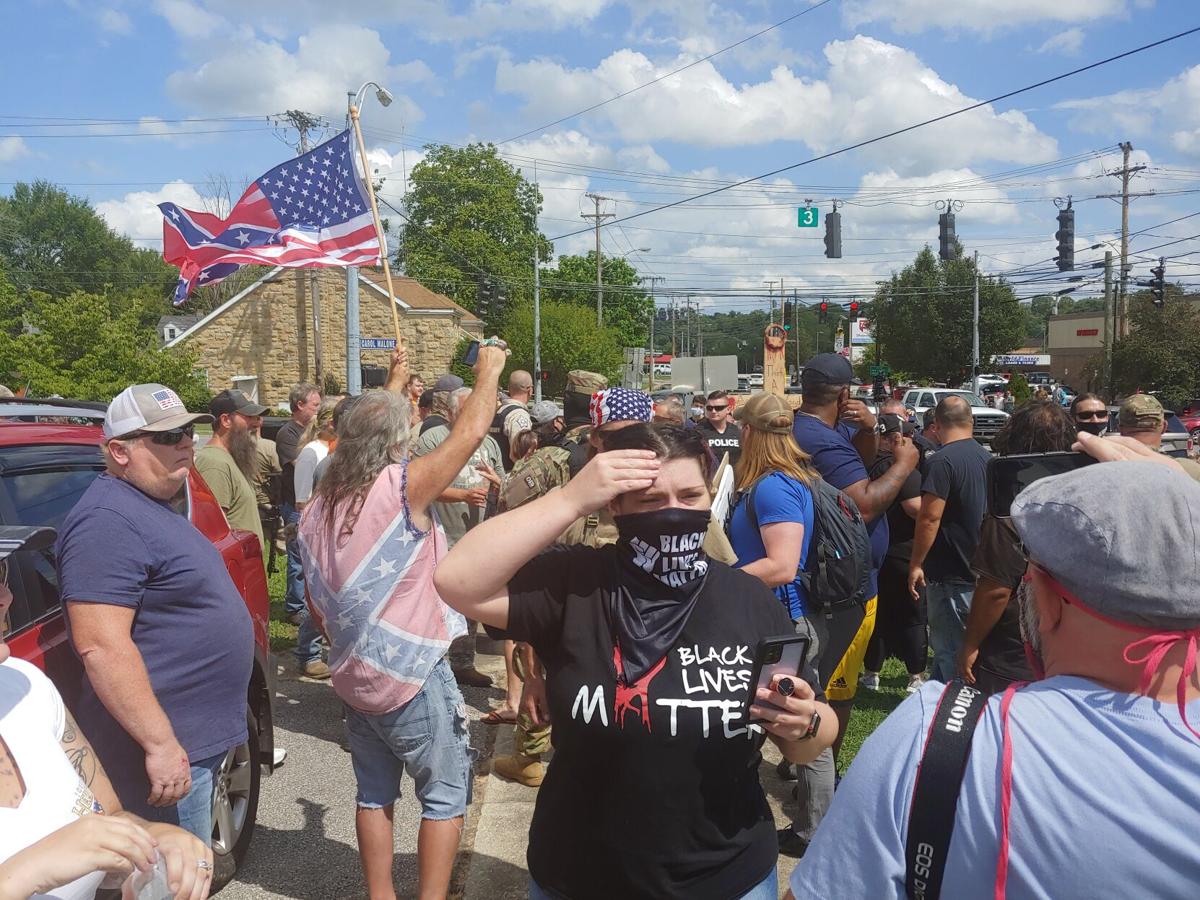 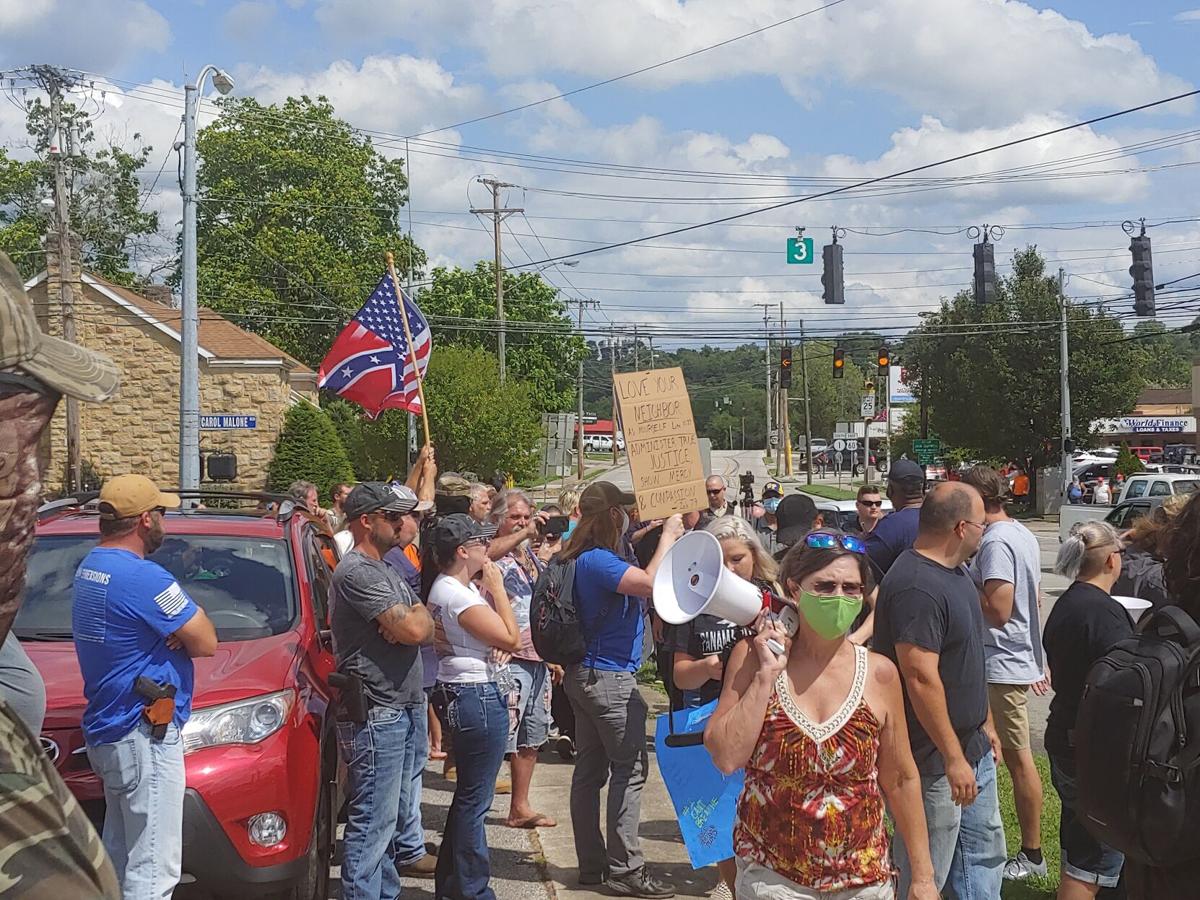 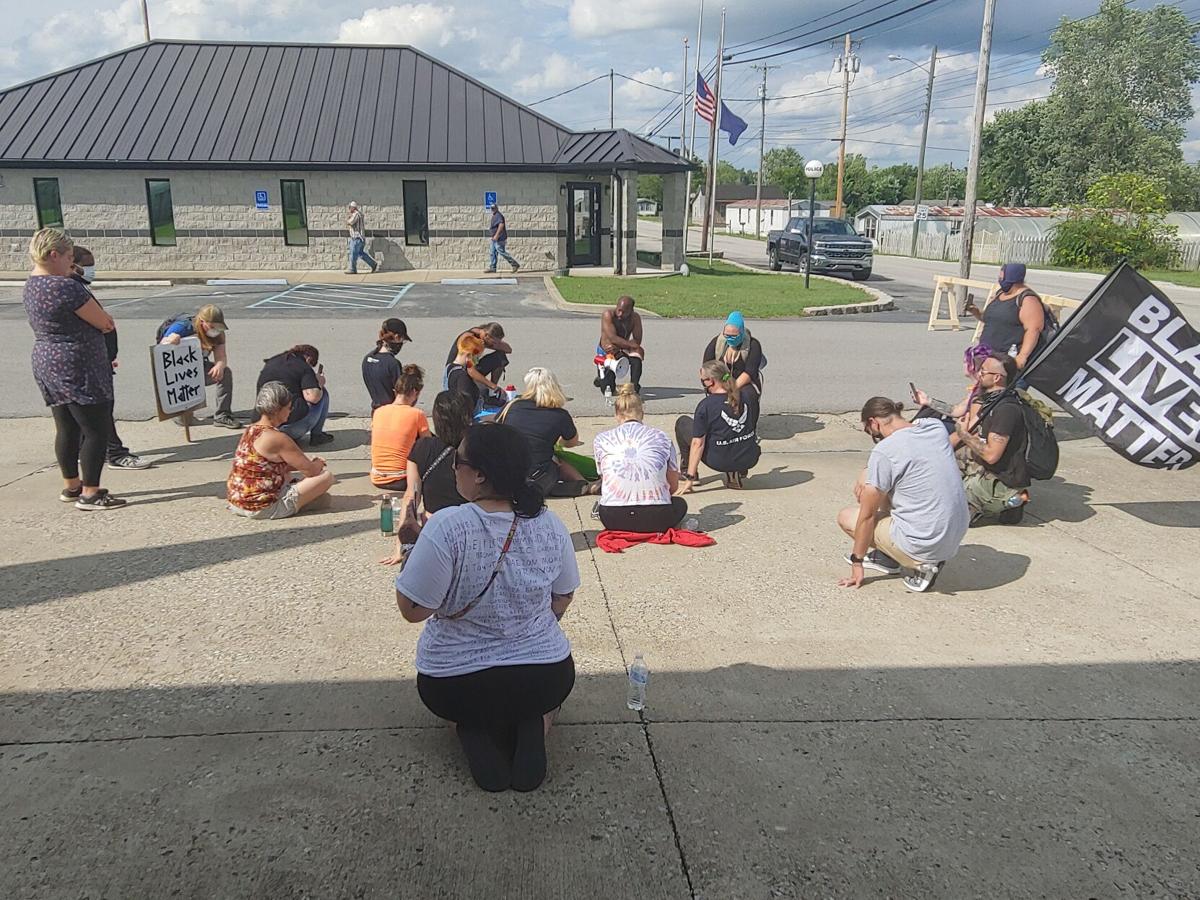 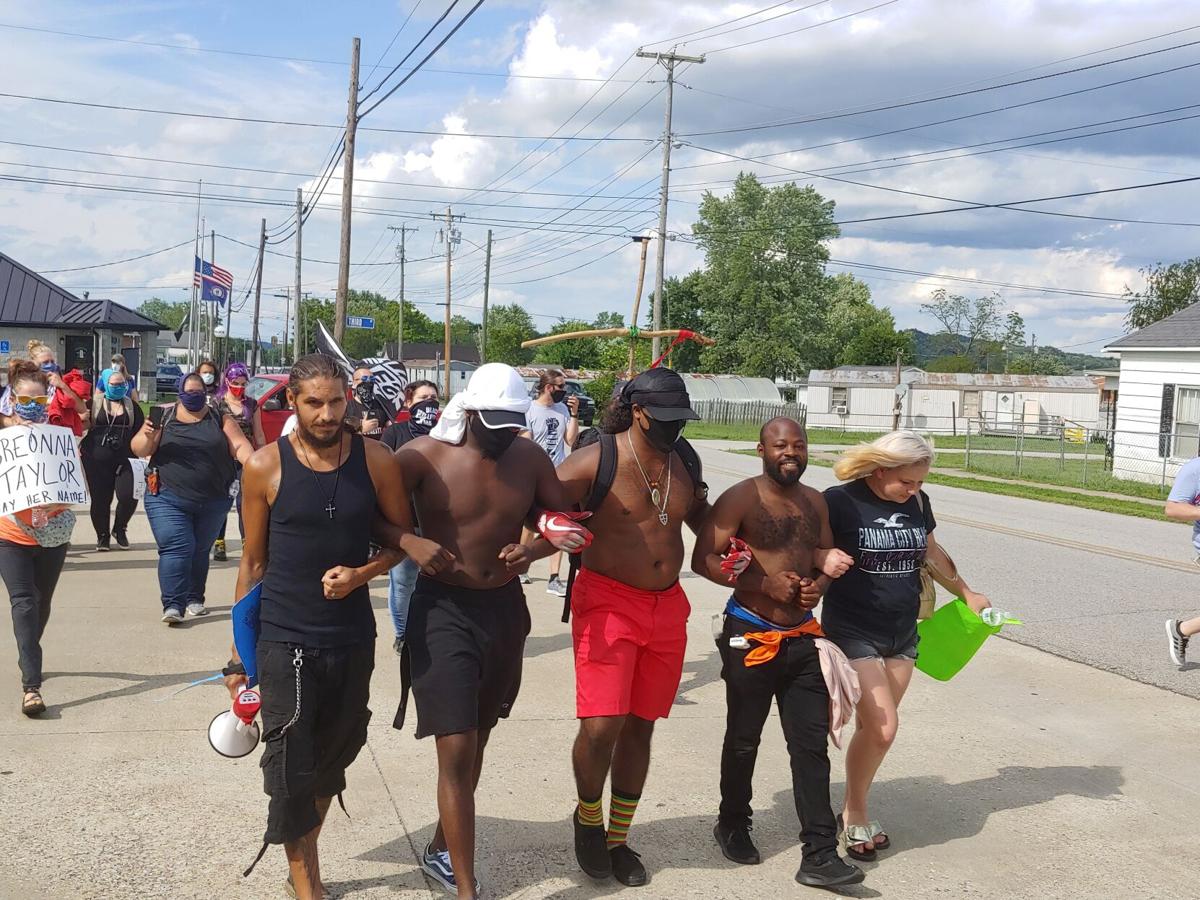 GRAYSON Sunday marked the second consecutive week of a protest in Grayson. The central figure of the protest, Dee Garrett, is currently a student at Kentucky Christian University and said that there has been a lot of attempted interference with the protest.

During last week’s event, Garrett said his truck was damaged by someone slamming a flag into it, and his karaoke machine was broken as well. But overall, he said the protest was peaceful.

Garrett said a lot of people misconstrue what he means when he says “Black lives matter.”

“Politically I don’t support Black Lives Matter,” Garrett said. “There is power in the words when I say Black lives matter. And what’s crazy is that people weren’t saying all lives matter in the ’60s. People weren’t saying it in the ’70s or the ’80s, and they weren’t saying it in the early 2000s. But now that African Americans have a voice and they’re not enslaved in fear, now it’s a problem. Now there are Black people standing up about how they’re being mistreated, and how that’s wrong, and now there’s a problem.

“This is an infection that has been going on for years,” Garrett added. “And we have just been putting Band-aids on the wound, but we have got the infection out. It’s just Band-aids on top of Band-aids.”

Garrett said he believes most people have his motivation wrong.

“There hasn’t been one brick thrown, and there hasn’t been anything destroyed in Grayson,” Garrett said. “People have been taking parts of my videos and editing them to make people afraid rather than sitting down and watching the whole videos. But you can’t be a bully, you can’t go against people’s First Amendment rights and expect them to just shut up.”

Garrett said the problem is going on across the nation.

“America doesn’t want to admit that it has been wrong for hundreds of years,” Garrett said. “All it will take is people coming together and saying I’m sorry. If Trump would go on TV and say OK, let’s come together and mend our ways instead of going on TV and calling people thugs and criminals, then we could make some changes.”

And that change, he said, is his motivation. He says he wants to start conversations about the issues and get people involved. But those conversations, he said, are what people are afraid to have.

But conversations and Garrett’s message are not what have Grayson residents on edge. Many say Garrett believes they are trying to infringe upon his rights, but they respond by saying he is as free to speak his mind as anyone else. The predominant concern with most is that other groups will be brought in, or simply attracted, who do not share the peaceful intent Garrett says motivates him.

Cathy Thornsberry, a business owner in Grayson who operates Two Wolves Trading Post, said she was concerned that violence might occur. She observed a smaller crowd on Sunday compared to July 26.

“Last week it got so crazy that I had five guys in my store,” Thornsberry said. “They weren’t to engage with anything going on outside, but if they (protesters) came inside the store, I wanted them to know they weren’t welcome.”

This precaution, Thornsberry said, was due to the potential damage that could be caused.

“I believe everyone has a right to their opinion,” Thornsberry said. “We have a constitutional right to speak freely.”

Thornsberry, who is of Native American descent, said she isn’t taking sides for or against the Black Lives Matter movement. She added that she was amazed at how many people from around the area showed up, armed and ready for whatever might transpire. Fortunately, she said, no shots were fired.

“You’ll never hear us say the n-word,” Wheeler said. The group is made up of both active and retired military, as well as former law enforcement, Wheeler said.

“We stand with everyone, Black, white, Hispanic, it doesn’t matter,” said Fred Sammons, another A/P III% member. “And we’re not out here to keep him from speaking at all. We are just out here to prevent trouble because we don’t know who’s coming with him. If you see on TV where the windows are being broken out and buildings burned, we are here to prevent that. A lot of citizens might be afraid, but we aren’t. And we’re here to intervene for them if we need to.”

Some area residents came from Ironton to hear the message and show support, and said they harbored no thought of violence whatsoever. Ironton’s Daniel Murphy attended the peaceful protest in his town earlier this summer, and said he had no expectation of the Grayson marches being any less peaceful.

“Protesting like this is very important,” Murphy said. “Our forefathers, they marched and they picketed and they sat in for us to have these freedoms. So, it would be remiss of us if we just let this go by and did not show support for someone else in a different area. We don’t want anyone to fear us. But we do need to come together with unity so we can bring about change. There was a man here who marched in the ’60s, and here we are in 2020.

“I am here trying to achieve what that man was trying to achieve in the ’60s; and I am hoping and praying to God that it will take hold so my kids don’t have to say their dad was doing this 60 years ago,” he added.

Murphy said the best way to achieve the goal was to remain peaceful.

“It is very important to bring about change, and to bring about awareness,” said Charles McComas, also of Ironton. McComas said he believed Garrett’s ultimate goal was just that — awareness and change — to benefit not himself but his children. I’m a U.S. Navy veteran, and I served so that he would have that right. So, I am going to walk with him.

“If these protests are peaceful, and people are talking and coming to an agreement about things, then that’s change. But if people are just bickering and arguing, and fearing the unknown, then that won’t happen. I would never have dreamed I would see so many people in Grayson with AR-15’s,” McComas said. “But this is 2020, and that’s a reality. So, I am down here so that my kids don’t have to deal with that. And if it takes walking to bring about change, I am more than willing to do that.”

Editor’s note: The First Amendment to the Constitution, in part, guarantees the right of free speech, and the Second Amendment to the Constitution guarantees the right to keep and bear arms. It would be the ultimate tragedy if those two amendments would ever come to odds with each other. The Daily Independent invites your views. Feel free to contact us so that your voice can be heard. Communication is the key to resolving any issue, and the newspaper is here to encourage that process. Email cromans@dailyindependent.com or asnyder@dailyindependent.com; or call (606) 326-2664.