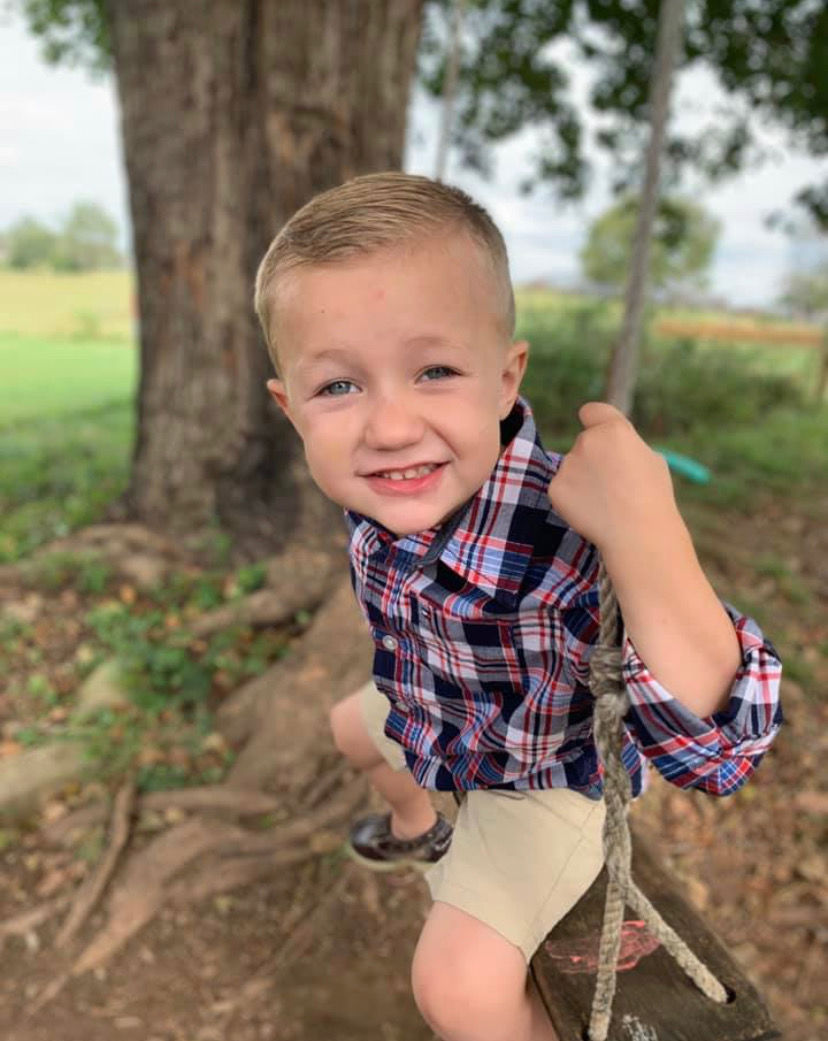 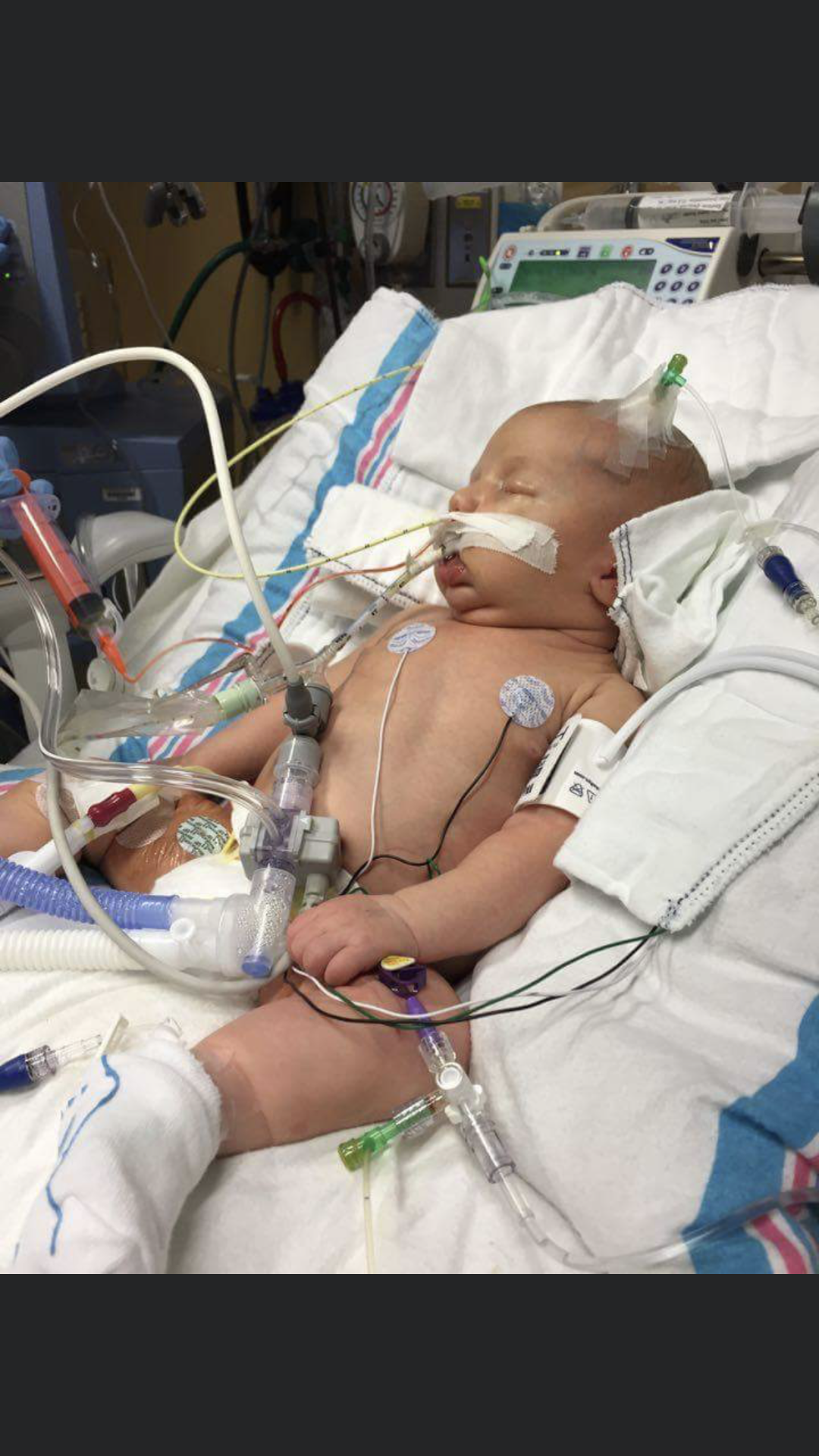 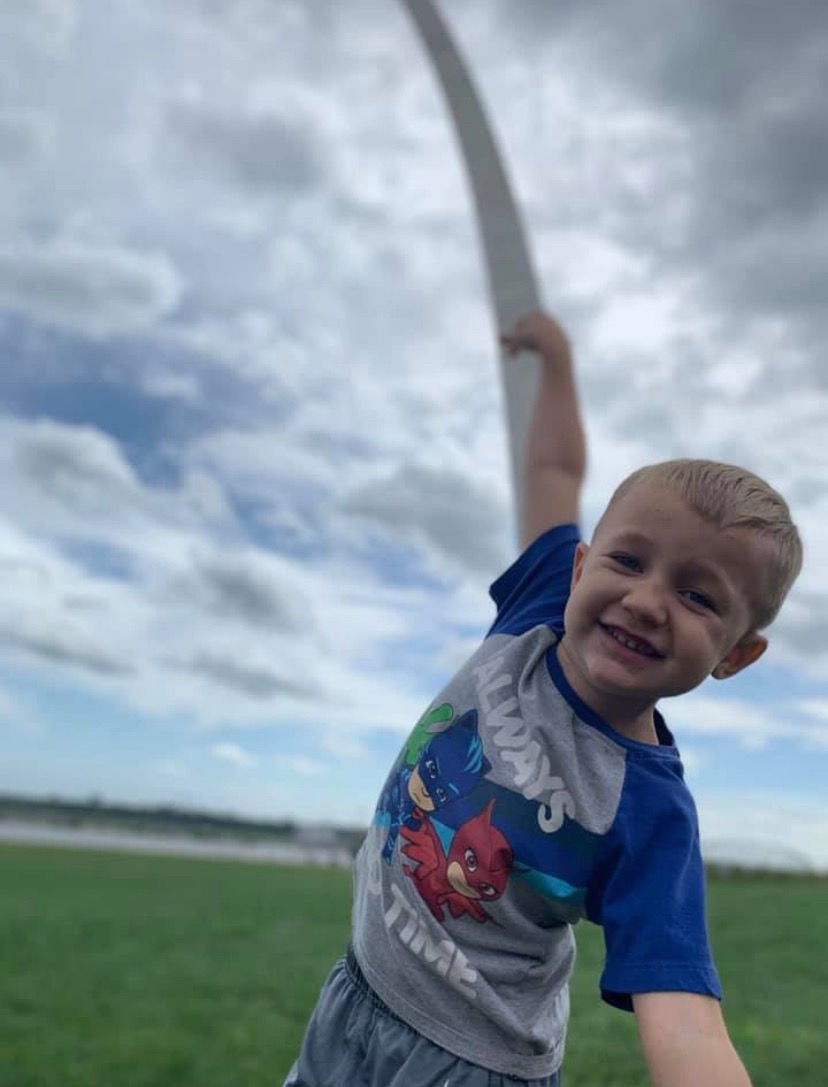 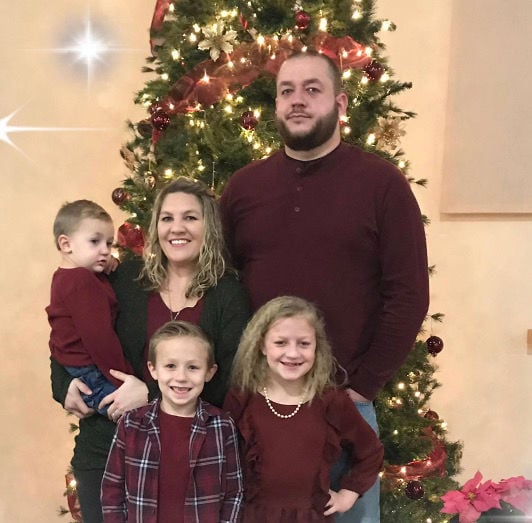 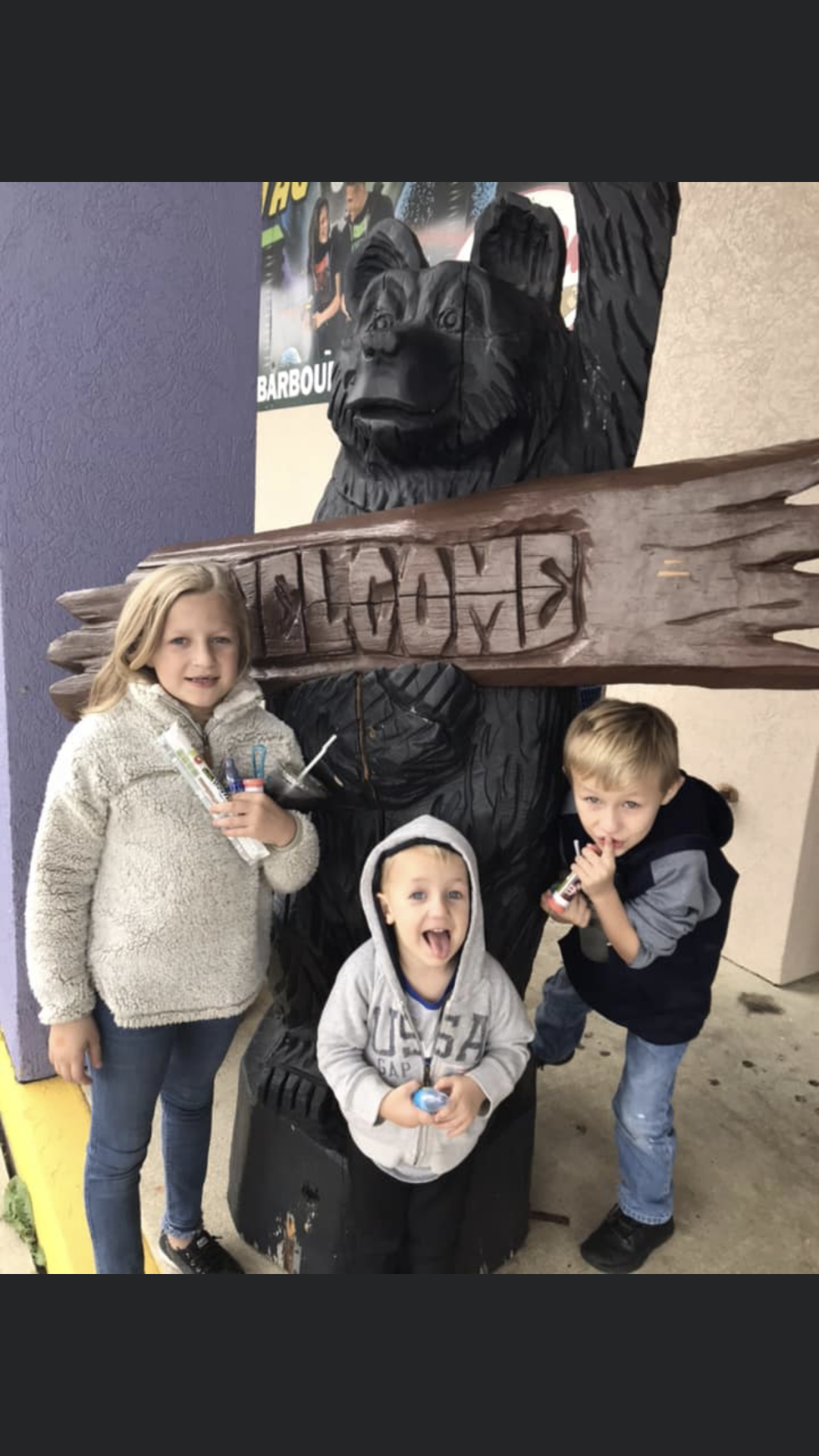 Two days before his birthday, which happens to be Thanksgiving this year, big sister Alleighson asked Jett, “What do you want to be when you grow up, Jett?”

Without missing a beat, Jett offered a fitting answer in the form of a whisper: “Nobody.”

All three kids had battled sickness leading up to Christmas, but as of Christmas Eve, they were ostensibly on the mend. Diagnosed a few days earlier with RSV, Jett was too young to take medication, but Leanne resorted to saltwater treatments and other ways to keep his sinuses in check, she said. It all seemed to be working, even though she suffered from sleep deprivation.

“I thought maybe he was getting over it,” she said.

A rainy Christmas Day presented a different outlook. Something was amiss with “Baby,” as Mom refers to James Earl Tackett, aka Jett.

All of the sudden, Jett struggled for air. Then, his breathing ceased.

“I had him in a carseat,” Aaron Tackett recalled, referring to the carrier portion of a carseat, “and he stopped breathing. I had him out of the carseat rubbing his chest and he started breathing again. About that time, my sister (Stacy) walked in. We didn’t even bother putting him back in the carseat. We got in the truck.”

“I just held him,” Leanne said.

They hurried to King’s Daughters Medical Center. Amid steady precipitation, they arrived at KDMC from Westwood in three minutes.

At KDMC, Leanne sprinted in, “Baby” in tow, blurting a mother’s cries for help. Jett’s life expectation wavered between doubtful and questionable.

“It didn’t set in how bad it was until I got through parking the truck and came in and told them who I was looking for,” Aaron said. “They got this real panicked look on their face and a doctor came out and started walking me back to the trauma room and was explaining infant CPR and all this stuff that I was going to see when I got in there.”

A patient had died literally minutes before the Tacketts entered the same trauma room, Aaron said.

It was Christmas Day. They couldn’t lose their baby.

According to Aaron, KDMC’s trauma nurses used a power drill and had to screw into Jett’s shin to get an IV started.

“(Aaron) covered my ears and face while it was happening,” Leanne said.

“They kept calling Cabell for a helicopter,” Aaron said. “It was pouring the rain, so they couldn’t fly.”

In the meantime, Jett’s breathing stopped for a second time.

One of the heroes of the story — a respiratory therapist whose name has slipped Leanne’s memory — entered the picture.

The therapist utilized an Ambu bag, which is a hand-held device that provides pressure ventilation to patients lacking oxygen. It’s also known as a bag valve mask.

“The guy laid over the head of (Jett’s) bed for 45 minutes; and he refused to break,” Aaron Tackett said. He wouldn’t stop, the Tacketts said, because he’d found a rhythm to help Jett adequately breathe.

“He sat there and squeezed that bag,” Aaron said, until a nurse from Hoops charged in with an incubator on a cart.

“When she came in, everybody just got out of the way,” Aaron Tackett said. Jett was stabilized in a matter of minutes.

“We probably never would’ve celebrated Christmas again. Honestly, we just wouldn’t have been able to do it. Thanksgiving would’ve been out of the question, too, probably,” Aaron Tackett said as he watched Jett play an iPhone game on the couch.

“They wouldn’t tell us for days whether he was going to make it or not,” Leanne said. Aaron finally posed a nurse with the question: Is he going to live? Although she didn’t exhibit exorbitant confidence, a nod and a “yeah” was assurance enough.

Jett pulled through. He was way too resilient, entirely too stubborn and indubitably durable.

Hooked up to machines, including a respirator for nine days at Cabell, Leanne at one point blurted, “That doesn’t look like my baby.”

Day 8 supplied the Tacketts with another scare. And, of course, it was a holiday.

One of Jett’s lungs collapsed on New Year’s Day.

“On New Year’s, they were going to try to take him off the ventilator,” Leanne said.

In total, Jett was hospitalized for 17 days. Throughout those 17 days, Leanne didn’t inhale one gasp of fresh air and didn’t get a glimpse of the sun.

Throughout the two-and-a-half-week period, Aaron spent his time either at his workplace — Kentucky Electric Steel — or the hospital. He’d periodically stop in Ronald McDonald House for a shower or a quick bite.

While Jett was hospitalized, the Tacketts relied on family and friends to care for Alleighson and Landon.

Leanne and Aaron combatted sickness, too. Aaron developed pneumonia and Leanne RSV. Doctors treated both aggressively in order to get them back to Jett’s side.

Jett was on “sedatives so strong it basically gets them addicted to it,” Aaron said. So Cabell prescribed Jett methadone.

“Here he was, shaking, looking like a drug baby coming off of the sedatives and stuff,” Leanne said. “It’s tough to watch your baby go through that.”

The Tacketts set alarms on their phones and gave him proper dosage — not a drop more or less — of methadone until Jett was weaned off of it.

“No matter if I was driving or whatever, I’d pull over and get it to him,” Leanne said.

“I’d be with Alleighson in the car or something, and I’d constantly be like, ‘Alleighson, is he still breathing? Is he still OK?’ My mom said I couldn’t do that, that it would traumatize the kids. I still have PTSD from it, honestly,” she said.

While her pregnancy was smooth, the days leading up to Jett’s birth weren’t ideal.

Through her own research, Leanne discovered she had cholestasis, which elevates liver enzymes and causes intense itching.

Before heading to Magoffin County to spend Thanksgiving at her mother’s, Leanne went to the ER and had a gallbladder ultrasound in addition to bloodwork. She was initially told her liver enzymes were “slightly elevated.”

By Friday, her gynecologist called and informed her that those enzymes were “dangerous. I’ll see you in labor and delivery in two hours,” she remembered him saying.

So, they booked it back from Salyersville.

The delivery required an emergency C-section because Jett had an umbilical cord prolapse.

Jett was born early — 36 weeks and six days into the pregnancy — at a hearty weight of 8 pounds, 2 ounces. He was in KDMC’s neonatal intensive care unit because he came prematurely. But he was healthy.

“It was, I guess, embarrassing because he was so big and healthy, and there were all those little tiny babies around him,” Leanne said. “We (Aaron and Leanne) felt kinda bad about that.”

It was essentially smooth sailing for the first three weeks of his life.

But with Jett, it just had to get interesting.

Today, Jett is 4. He is rotten and reckless yet smart and sweet.

He’s not exactly calculated in risk-taking.

“He’s basically been trying to die for a long time … to this day,” Aaron said with a grin.

Dr. Desmond Barrett, the Tacketts’ pastor at Summit Church of the Nazarene, presented a “Flash” superhero picture during his dedication to Christ because of his unhinged energy.

“I would describe him as the Grinch because when he was 2, he ate an ornament,” said brother Landon, 7.

Jett has jumped in pools and ponds, scurried away from Leanne in crowds and he’s even downed an entire bottle of Tylenol — “I don’t know how he got the lid off,” Leanne said.

“I think he knows God has him here for a reason because he tries to test His limits,” she added.

What’s in his future? Stunt man? Perhaps a NASCAR driver, which would appease his dad.

“He usually says he wants to be Big Cat Boy,” Alleighson said.

Maybe he’ll be Drax the Destroyer from “Guardians of the Galaxy.” That’s his favorite video game character.

“I like the guy with scratches on him,” Jett said while running to the kitchen for a snack. “When you press X, he does fights.”