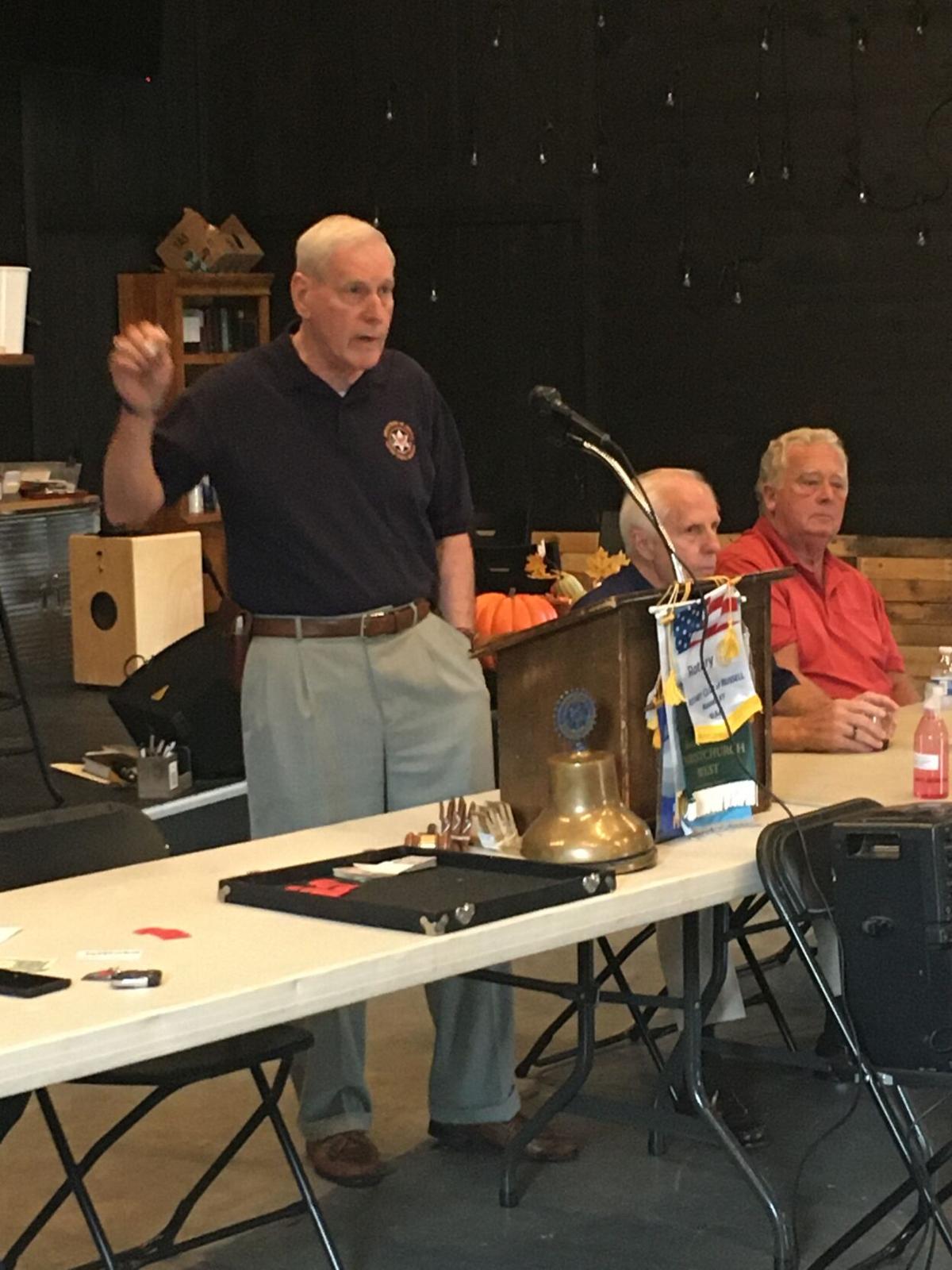 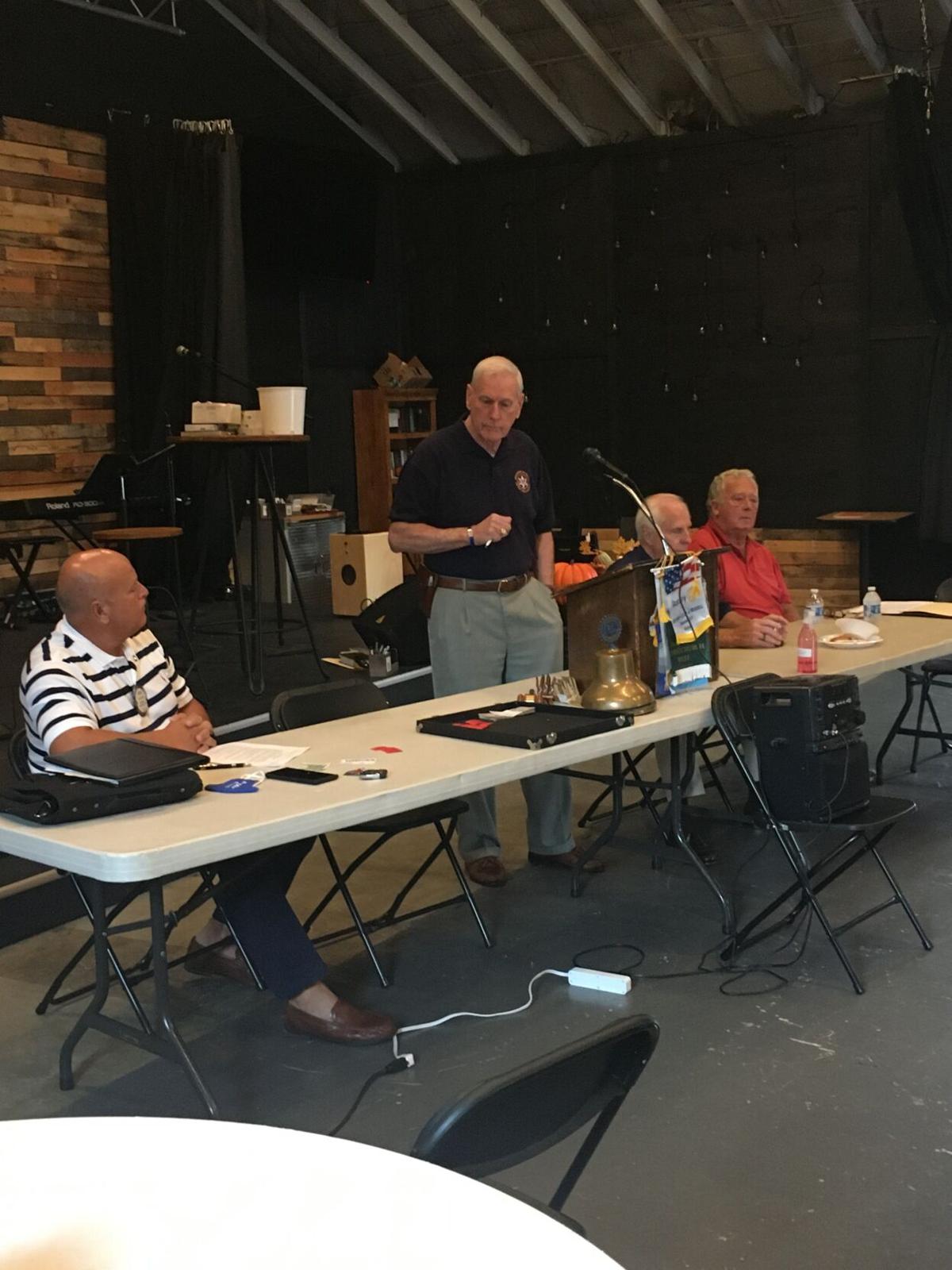 RUSSELL Retired U.S. Marshal Doug Spillman spoke to the Russell Rotary on Thursday and shared some of his experiences working as a Kentucky State Police Officer, Corrections Officer, and U.S. Marshal.

Spillman retired from the Marshal service at the age of 54. He was as a volunteer for the Boy Scouts of America for 24 years as a Commissioner and Scout Master, and is a member of Oak Street Freewill Baptist Church and served as a Deacon for 20 years. Though not a minister, he has sat on the State Executive Board of the Freewill Baptist for the past 26 years. All of these things, Spillman said, he felt honored to be able to do.

“I was raised in Webbville, Kentucky, in Lawrence County,” Spillman told the group. “It was in a humble home, and my dad was a self-employed mechanic who could not read or write. But we were raised up in a respectful home. My dad always told me that if you borrowed something, you took it back in as good a shape as when you borrowed it. And you respect other people’s property. And we grew up believing in God.”

“I would go to school and see him getting in his cruiser in the morning,” Spillman said. “And I decided that was what I wanted to be.”

He graduated from high school on a Friday, Spillman said, and the following Monday he joined the U.S. Army in Ashland. His plan was to become a military policeman to get some experience in the field. Spillman achieved that, and secured a top-secret security clearance as well. During training, half of his platoon was sent to Vietnam, with Spillman in that half. At the age of 19, he spent a year in Saigon; and after a brief period stateside, Spillman volunteered to return for a second tour.

After his discharge from the Army, Spillman had a brief break before joining the Kentucky State Police in 1969. Upon graduation from the Police Academy, he was then assigned to the Morehead Post and patrolled Lewis County for the first year, virtually by himself, he said.

“I will always consider being a state trooper as the pinnacle of my career,” Spillman said. “As a 24-year-old state trooper, I had to use more independent judgment than I did as a U.S. Marshal. That’s because as a U.S. Marshall you are doing things most of the time together, whether it is transporting prisoners or serving a warrant.”

Spillman also shared a harrowing experience from his time as a Kentucky State Trooper.

“In 1971 I was almost killed in Greenup County,” Spillman said. Spillman was arresting someone, and they shoved him out in front of a car. He would end up spending 10 days in an Intensive Care Unit, followed by a month in King’s Daughter’s Medical Center. Spillman returned to work approximately one month after being released from the hospital in October 1971. Eventually in 1972, Spillman made the decision to quit State Police, and spent several years working different jobs, including working for a year at a state prison.

Working at a prison, however, was not to his liking, he told the group, and after that year he was able to transfer to the U.S. Marshals Office, and was assigned to the Louisville office. Spillman shared his experiences training in Brunswick, Georgia, and later working in Louisville. Part of his duties early on were federal courtroom security, which entailed searching the courtroom and under the judge’s bench before court was in session, and escorting the judge into the court. Other duties included escorting federal prisoners when they needed to be transferred.

“I had been searching prisoners’ shoes for about 20 years,” Spillman said, telling a story that illustrated how every detail of each procedure needed to be followed. The prisoner was a 42-year-old bank robber who was being transferred from Ashland to Lexington, and from there to be sent to Georgia. “I was searching this prisoner while my partner was doing paperwork. Well, it paid off that day because under the inserts of his tennis shoes he had two metal rods the size of a No. 2 pencil, sharp on both ends.” Attention to procedure, Spillman said, prevented a potential loss of life on that day.

Spillman said he finished his career with the U.S. Marshal service in Ashland. And though the responsibilities and duties of U.S. Marshals have evolved over the years, Spillman considers them to be what they always have been, part of the backbone of federal law enforcement. They were the first federal law enforcement agency, founded in 1789, and now includes approximately 3,738 deputy U.S. Marshals and criminal investigators.