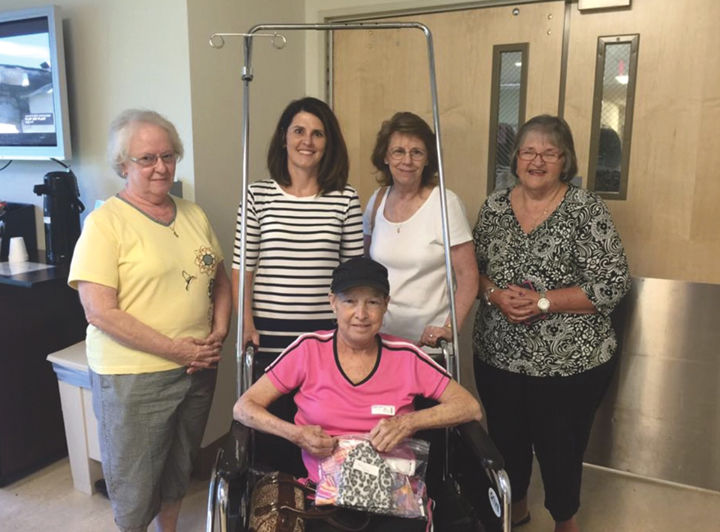 Seamstresses stand beside their work at the state convention.

Seamstresses stand beside their work at the state convention.

PROCTORVILLE Delma McComas is comfortable with angels. She has a small army of them.

Although a member of the Lawrence County (Ohio) Homemakers, McComas doesn’t sew. She wanted to participate in The Turban Project, which has volunteers making turbans and dewrags  for cancer patients losing their hair.

So she enlisted those who can sew.

The retired school teacher’s daughter, Kristen McComas Parsons, died of leukemia in 2011, when she was 37.

Her mother said she suffered for more than five years, with lengthy hospital stays as well as physical ailments such as heart and kidney failure and leg amputation.

Parsons was a speech pathologist who had been an outstanding student at Marshall University.

“She made one B in college because one of her professors said, ‘No one should get out of here with straight As,’” McComas, 75, recalled. Her daughter made the highest score on her national certification test in Marshall history at the time; the school has a $3,000 memorial scholarship in her name.

“She had beautiful hair, and one of the hardest things for me to see was to see her have her head shaved and how devastated she was,” McComas said. “She had dark brown hair and she was always well kept. She would never go out of the house without makeup and her hair fixed.”

After her daughter’s death, McComas discovered The Turban Project.

The Turban Project was begun by Cathy Braderich in 2012, when a few people made turbans to comfort a coworker, but the small group soon learned there was a need bigger than their friend’s, so they began making turbans to restock local hospitals and a radiation center. Now, the project, which has expanded throughout the country, stocks more than 50 hospitals and has donated more than 41,000 head coverings.

McComas’ group is one of several Satellite Turban Projects worldwide, making turbans, courage caps, beanies and reusable medical face masks to any patient who has lost their hair because of a medical condition such as alopecia, chemo therapy, surgeries or nervous conditions. The group also creates reusable medical face masks to donate to those with COPD and compromised immune systems.

The Lawrence County group has established two more satellite groups: in Putnam County, delivering to hospitals in Charleston, and in Osage, Mo., delivering to the surrounding areas.

“We started making (head coverings) in July 2016 and in August of 2016, we had passed out our first 100 to Cabell-Huntington Hospital and St. Mary’s,” McComas said. “Our total right now is 8,023 caps and masks delivered.”

She said her group has donated to medical facilities, restaurants, law enforcement and other works across the country.

But if McComas doesn’t sew, what does she do?

“I’m the organizer,” she said, noting her job is to get materials to “the angels,” as she calls them, the women who do the sewing. McComas has secured three grants to buy needed materials. The group also received a donation of 20 bolts of material from Michael’s.

Quarantine didn’t slow the sewers down at all, but perhaps shifted their focus a little.

“After we went into quarantine, I had two girls — Carol Wright and Diana Riner — who sewed and they’re the ones who sewed the 3,175 masks and distributed them across the country to business and restaurants and hospitals,” she said, noting the shortage of N95 masks inspired their work.

McComas, who said she never could get the hang of sewing from her seamstress mother, said the masks are double-layer cotton and her “angels” follow three different patterns.

“It’s a wonderful project and we’ll all been so blessed by it,” she said. “One of the last calls I’ve gotten about it was from a woman whose husband had picked up two. He had given up that he would make it through this,” she said, adding he had found a mask of his favorite college team. “After that, he said, ‘You know, I think I am going to make it,’ and he started making plans for his garden.”

About 12 others contribute to the sewing of the masks, which take 10 or 15 minutes to complete.

She said after the items are made, the sewers have their ministers pray over them before they are distributed.

McComas, who was named Ohio State Homemaker of the Year at the group’s 2017 convention, said the project and the honor wasn’t about her.

More about the project

The Turban Project relies on donations; 100 percent of donations goes into making and delive…