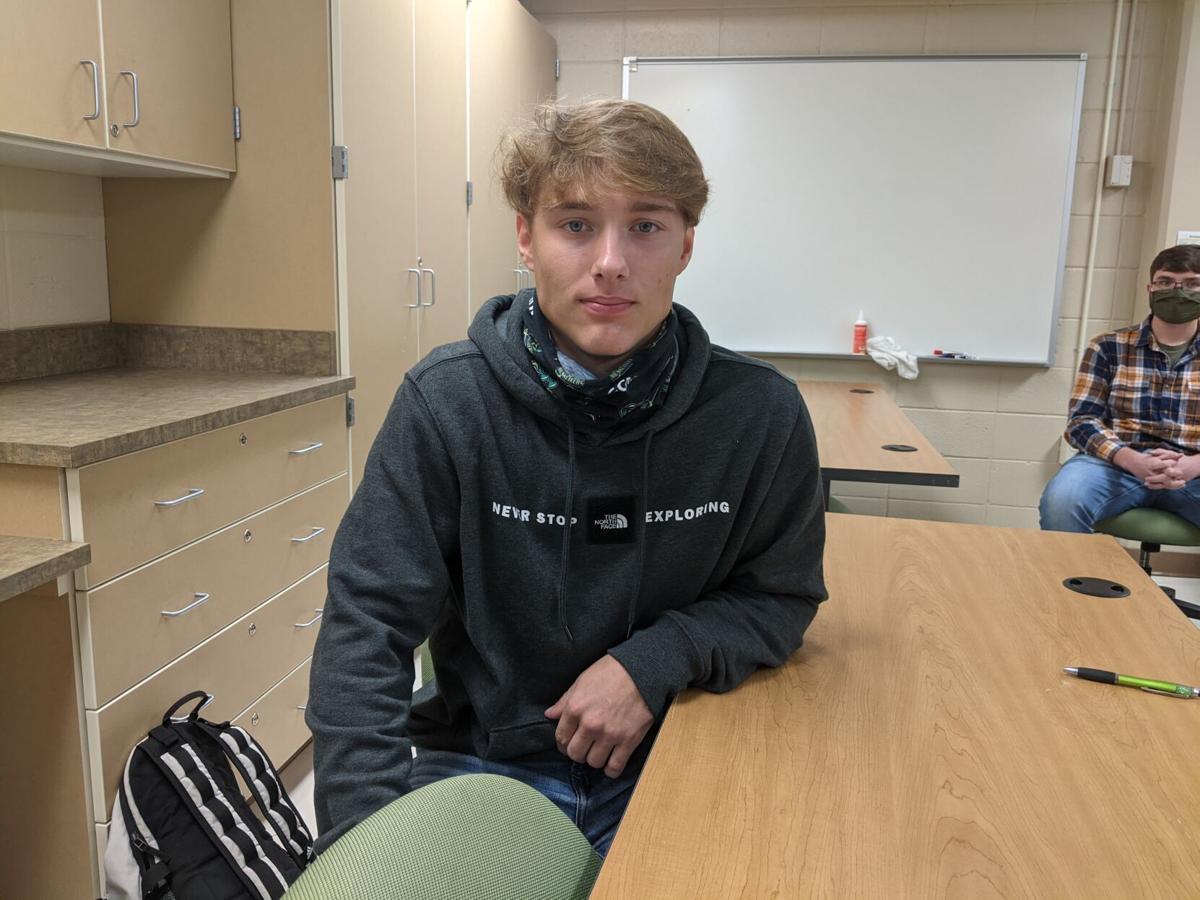 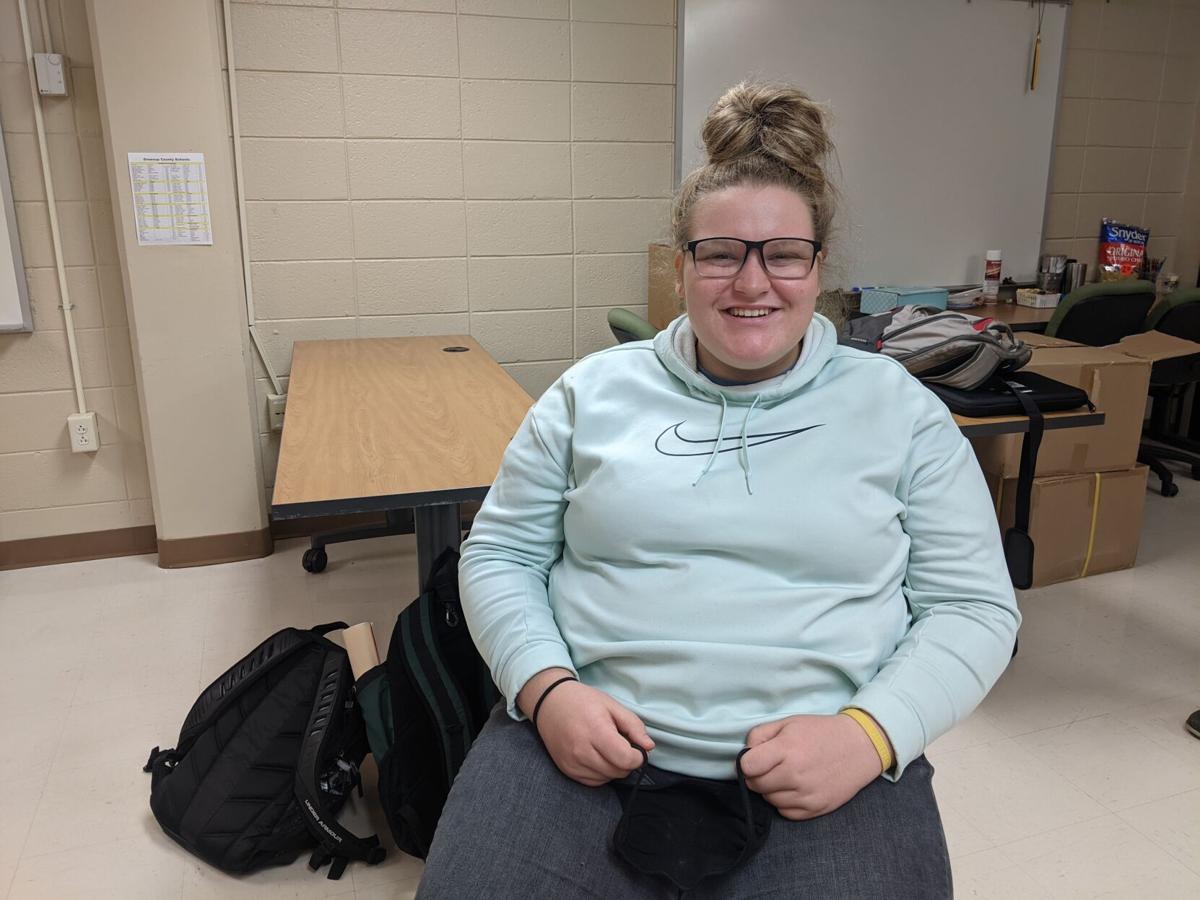 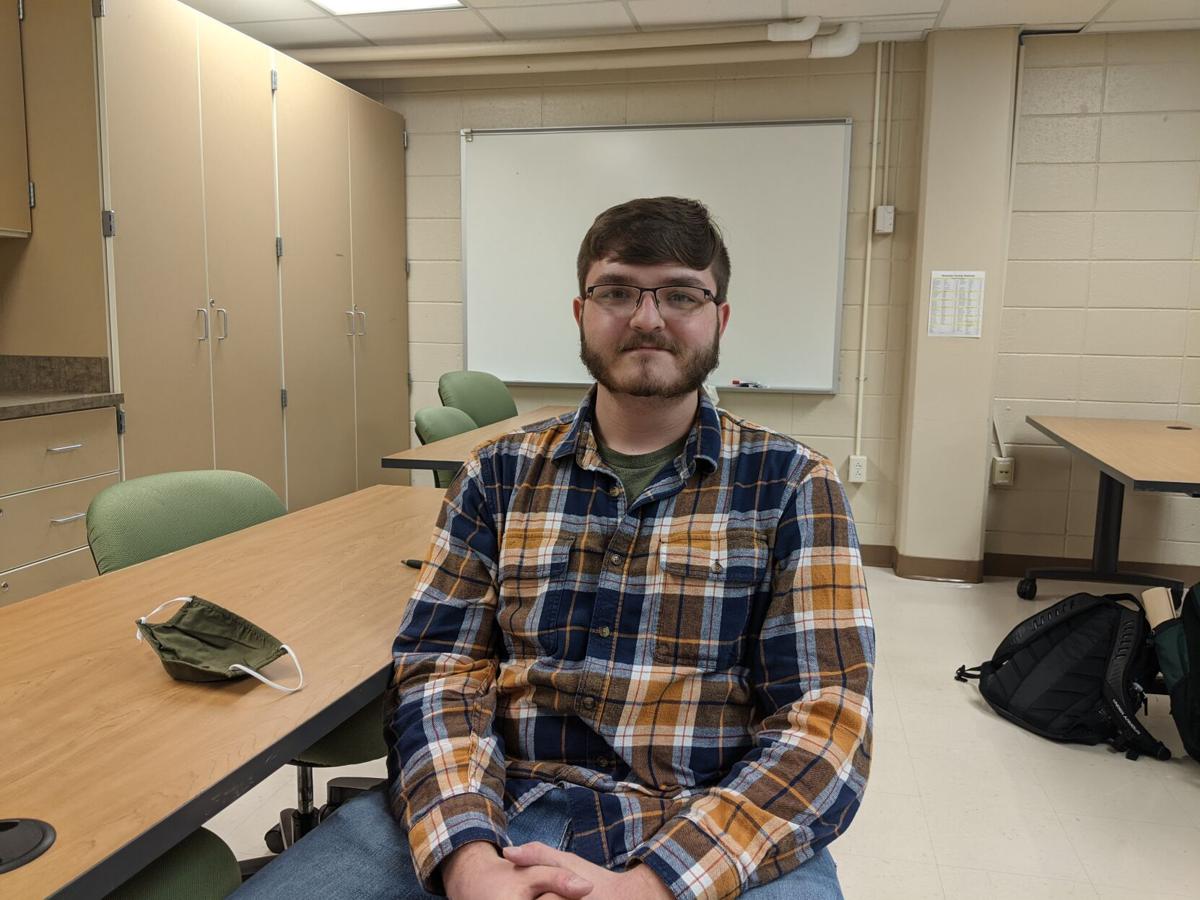 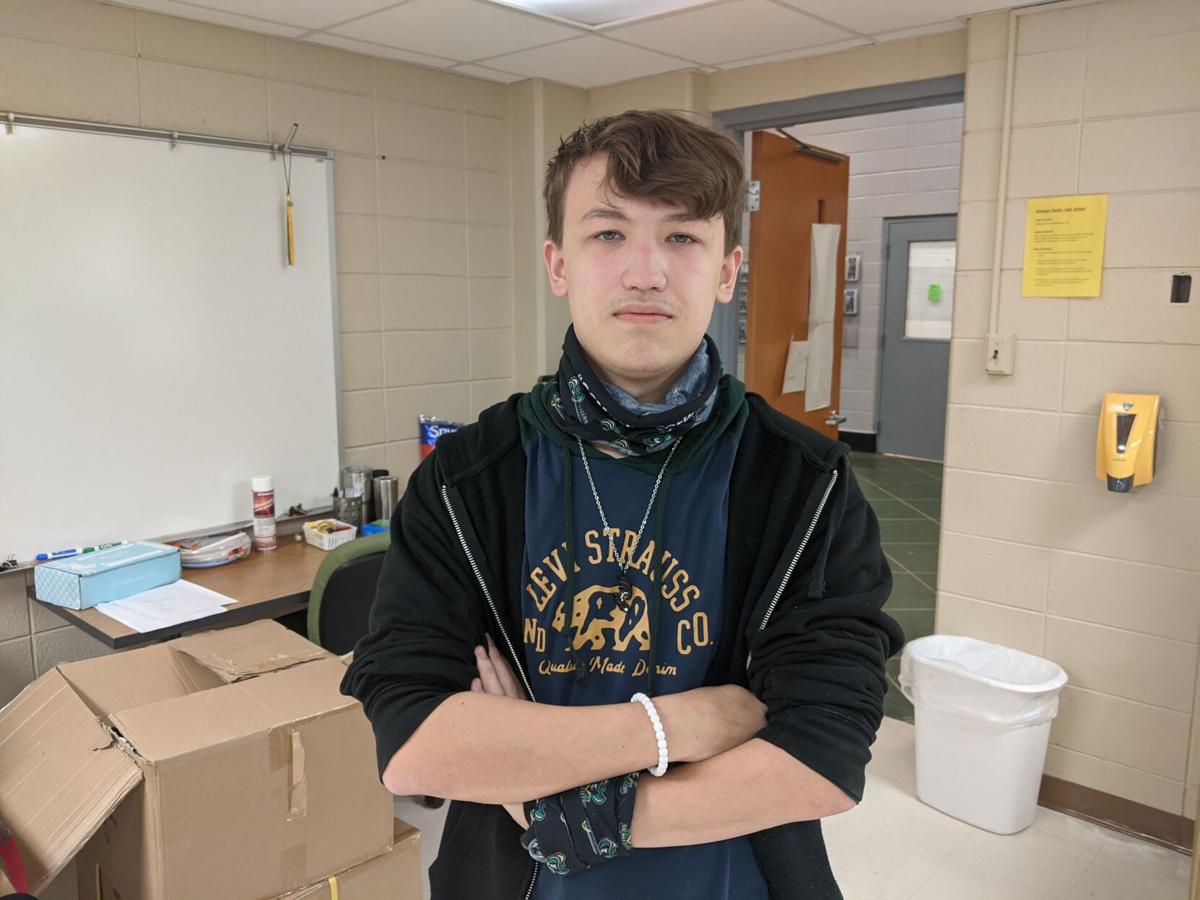 LLOYD The 2020 election comes at a pivotal time in U.S. history.

A raging pandemic, a polarized electorate and a contentious Congress all combine to make Nov. 3, 2020, a date that will live on in memory.

For a new generation of voters, just turned 18, it will be the first opportunity to take part in the democratic process. With that in mind, The Daily Independent met with a group of first-time voters who aired their thoughts on the presidential election.

They are Auston Clarkson, Adam Lemaster, Ellee Hunt and Andrew Nicely, all seniors at Greenup County High School, and all four plan to vote for incumbent Donald Trump over his challenger, former vice president Joe Biden.

Here are the questions we asked, and their answers:

Who will you vote for in the 2020 presidential election, and what is your chief reason for your choice?

Clarkson: I have to vote for Donald Trump. I am a Republican and so far he has stuck to most of the stuff he said he was going to do, and I can’t see anything he has done wrong in this four years he has already been president.

Nicely: The reason I’m going to be voting for Donald Trump is because he is, out of the two, preserving our rights the most. Personally, I don’t like either candidate, but out of what’s left, he is the most qualified, because America is its constitution, we the people, nothing else. So as far as I’m concerned, with that, the presidents don’t matter. It’s their attempts to conserve our history and rights.

Clarkson: I feel like it’s very important. Everything that’s happening right now in this world with the COVID-19 and all the pandemic, I feel like we need someone that’s going to lead us and put us in the right direction.

Lemaster: For the first time since I think 1994 there is an assault weapons ban on the table that would threaten to use violence against citizens who would not want to give up things they purchased legally through the law. So given Biden and Harris’s campaign promise to make a stronger assault weapons ban, I mean it violates the Second Amendment from my perspective, and it’s the first time since then that something so serious has been brought up during an election time.

Hunt: It’s pretty important, with the coronavirus going around now, you have to be able to handle that. It’s different from anything else.

Nicely: We have not had a good president since John F. Kennedy, really. He was the last loyal one I can remember or that I have knowledge of, because I was not alive then, but because you can see from videos and documentaries how much he loved his country and his people. All the other presidents I have known since then, they have not had the same love for their country and they see it as a role or a task; they don’t see it as a privilege. The presidency is to represent your country, not to disgrace it. Every election, you have to consider previous presidents, like for every single election, we’re going to remember JFK, we’re going to remember Obama, we’re going to remember every single president that’s ever been known and we’re going to reflect our choices off the past, because the parties build themselves on their candidates. I believe the party system is what is wrecking the country, personally, because we are so tied up in believing in parties that we don’t look for the candidacies. We’re not looking at what they’re doing for the Constitution.

Has their been any uncertainty for you in your choice of candidates, or have you known all along who would get your vote?

Clarkson: I’ve known all along. I’ve liked Trump since last year because mu social studies teacher, we’ve talked about him, I think it was seventh-grade year, and pointed out the facts and it seems like there’s nothing wrong about Donald Trump and what he was doing.

Lemaster: I’ve known pretty much all along and I have given it a little bit of thought, because Trump claims to be pro-Second-Aamendment, but he has made some decisions that I would deem a little bit undesireable regarding the Second Amendment. But overall, he is the better pick. It took a little bit of deliberation, but I’m firm in my conclusion.

Hunt: I’ve known all along. My family is really Republican so I’m kind of pushed that way.

Nicely: You never know who you’re going to choose because you don’t have all the facts. No one ever has the facts, but as soon as I heard they were going to try putting a limit on gun rights, it’s clear. In the Constitution, it doesn’t say what type of arms. It’s just arms, and it always will be that way unless it gets amended.

Is your preference based on specific issues or on qualities you see in your candidate?

Clarkson: Nothing too specific. I think they both mean well, but I just agree with Donald Trump more than with Biden.

Lemaster: Whenever I have looked at political candidates in the past — of course, this is the first year I’m able to vote, but I’ve always kept up with and been interested in elections — but the first issue, I always look at people and their stance on the Second Amendment and the Constitution overall.

Hunt: It’s based on how he has handled the coronavirus right now, and I just don’t think Biden can handle it.

Nicely: It’s nothing about the candidates, it’s what they’re fighting for as is all things in life. Guns are part of our country, same as the First Amendment, religion, freedom to speak, to petition, to gather, and every other one. We just need to remember that the Constitution is important, but more so the people, in which it defends.

Are you voting for your candidate — or against his opponent?

Clarkson: I’m voting for Trump, and not against Biden, because Biden, he’s not doing anything wrong, I just don’t agree with some of the stuff he talks about and I don’t think he is fit to be president mentally and physically, his health.

Lemaster: I would say it’s a vote against Joe Biden and the Democratic Party, but not one made out of spite. I’m not on the Trump train — quoting here — for everything Donald Trump has said, but I do think that compared to Joe Biden he is the best choice to preserve the Constitution.

Nicely: Against Biden, because they want to restrict our Second Amendment and of course the Constitution.

The COVID-19 crisis — is your candidate better qualified to manage the crisis, and how?

Clarkson: I believe so. It seems as if he has done a pretty good job handling it so far, so I don’t think he will have a problem with it in the future.

Lemaster: I don’t think either candidate is 100% qualified to handle this pandemic. It’s certainly something we haven’t seen in our lifetimes. No living person has seen a pandemic like this, of this severity, so I don’t really think either candidate is necessarily qualified to handle it. I believe that Donald Trump will do his best. I believe Joe Biden would do his best, but my vote is for Donald Trump.

Hunt: Yeah, he’s doing pretty good with it right now, and if we change. we would just have to start all over again.

Nicely: I don’t trust either if them, and I don’t mean that offensively. I have not seen much of either of them, but it’s better left to medical professionals.

Estle "Joe" Hutchison Jr., 93, of Greenup, Kentucky, passed away Tuesday, November 24, 2020, at Community Hospice Care Center in Ashland, Kentucky. Mr. Hutchison was born May 10, 1927 in Cabell County, West Virginia, a son of the late Estle Clay and Mable Jenkins Hutchison. He was a United S…

Theresa passed away peacefully after a brief illness at Rockingham County nursing home in Brentwood, N.H., at the age of 93. She was the wife of George Bonnevie, who predeceased her in 2004. She is survived by her children, Arthur and his wife Patricia, Richard and his wife Andrea (predeceas…