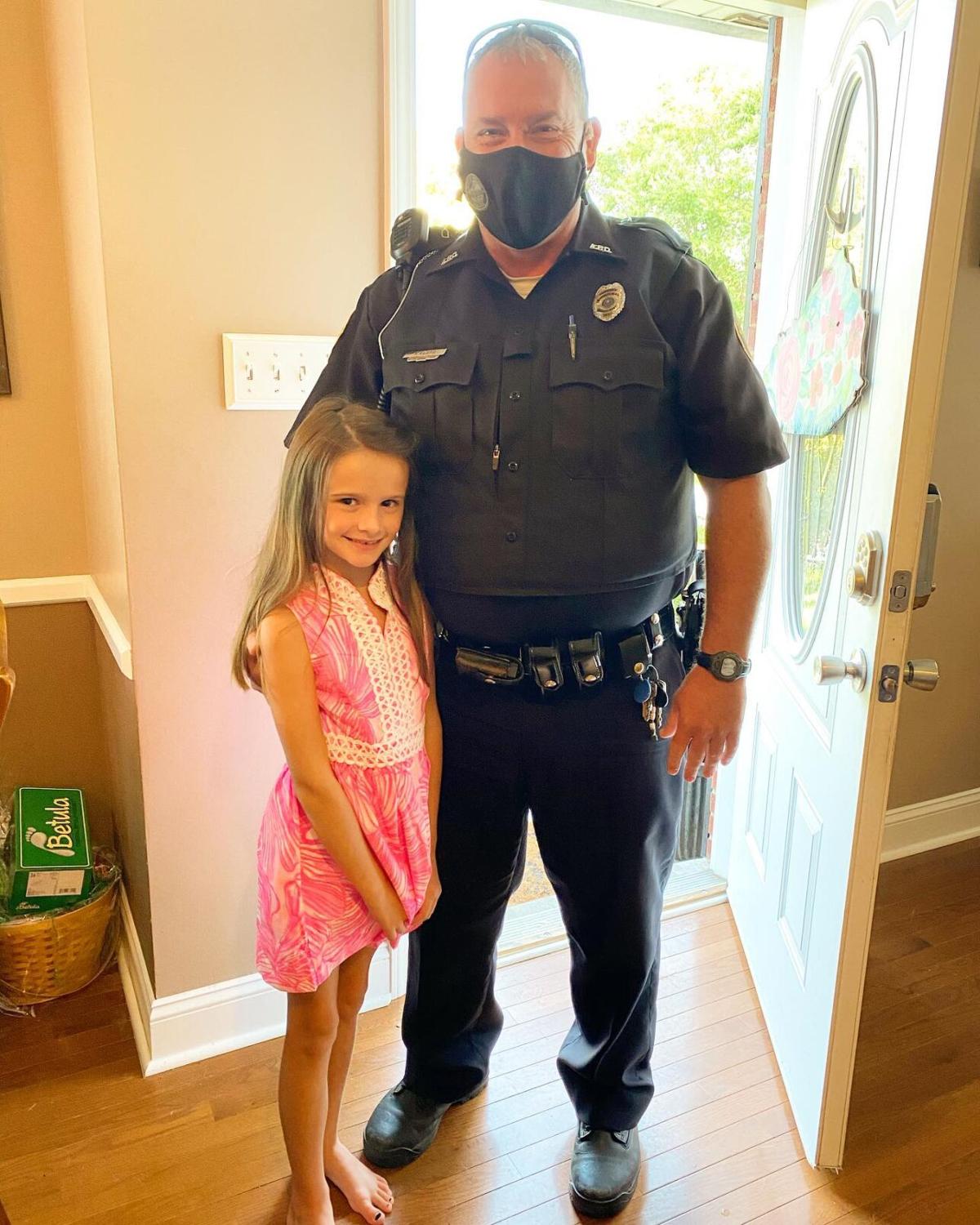 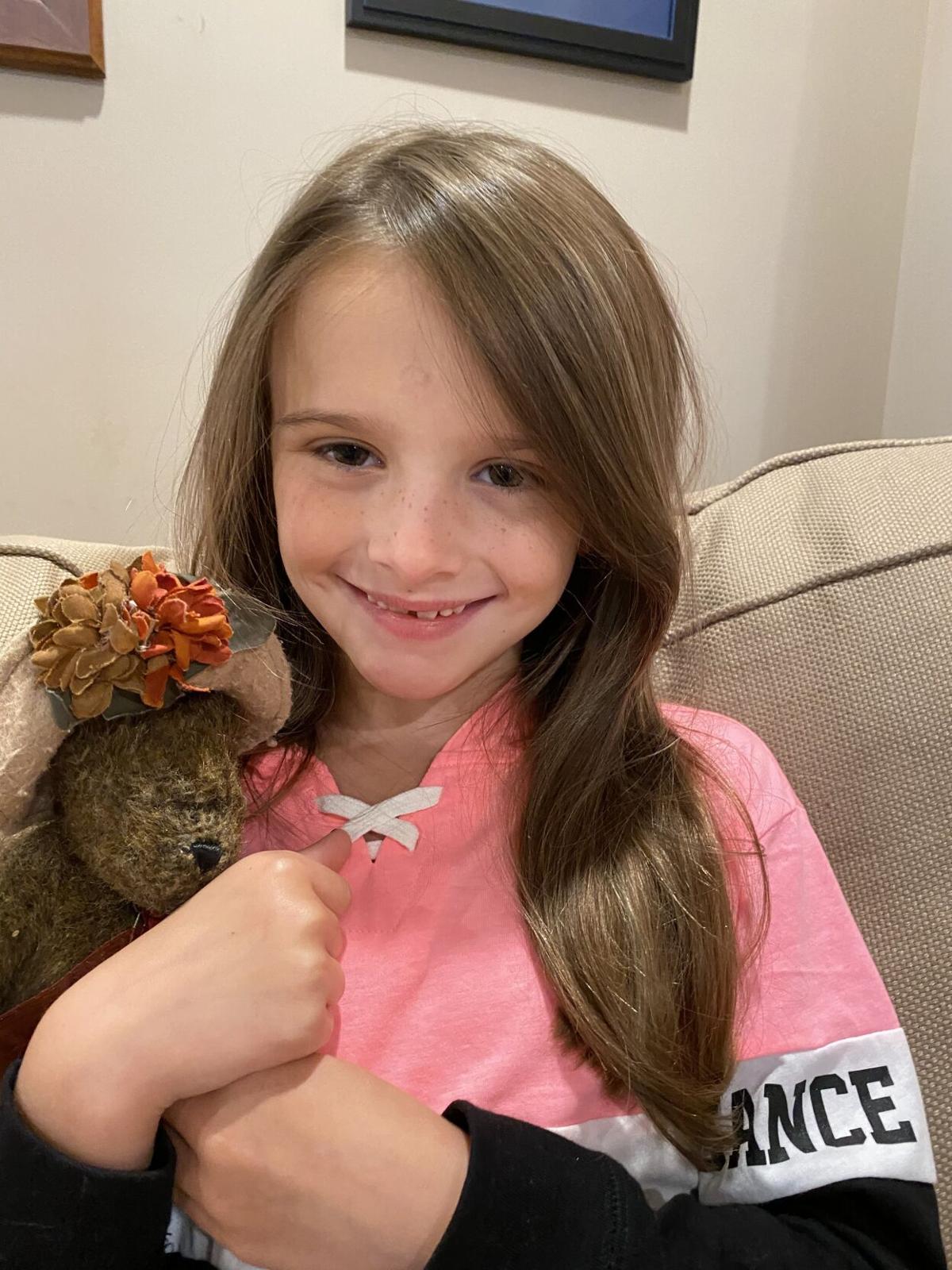 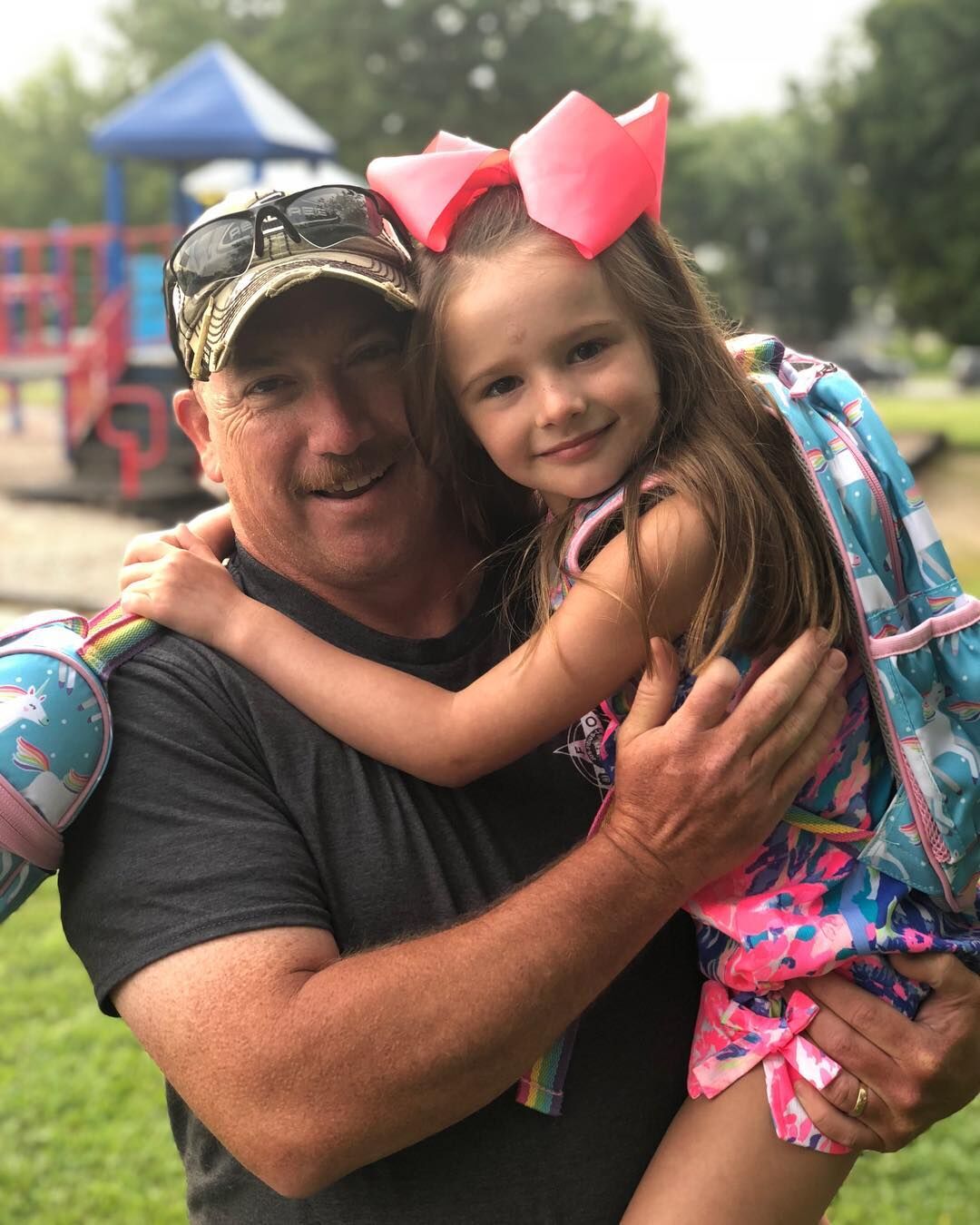 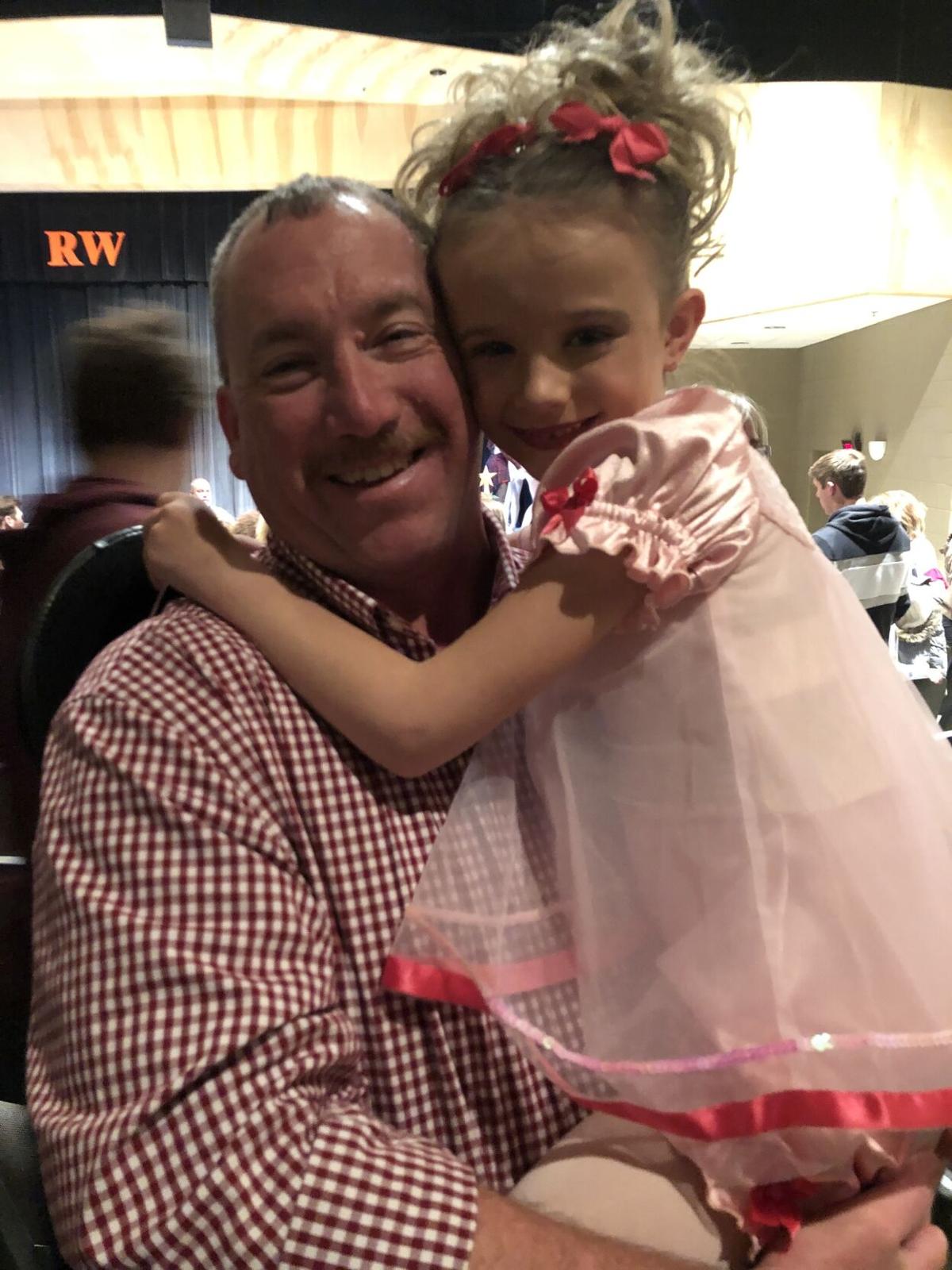 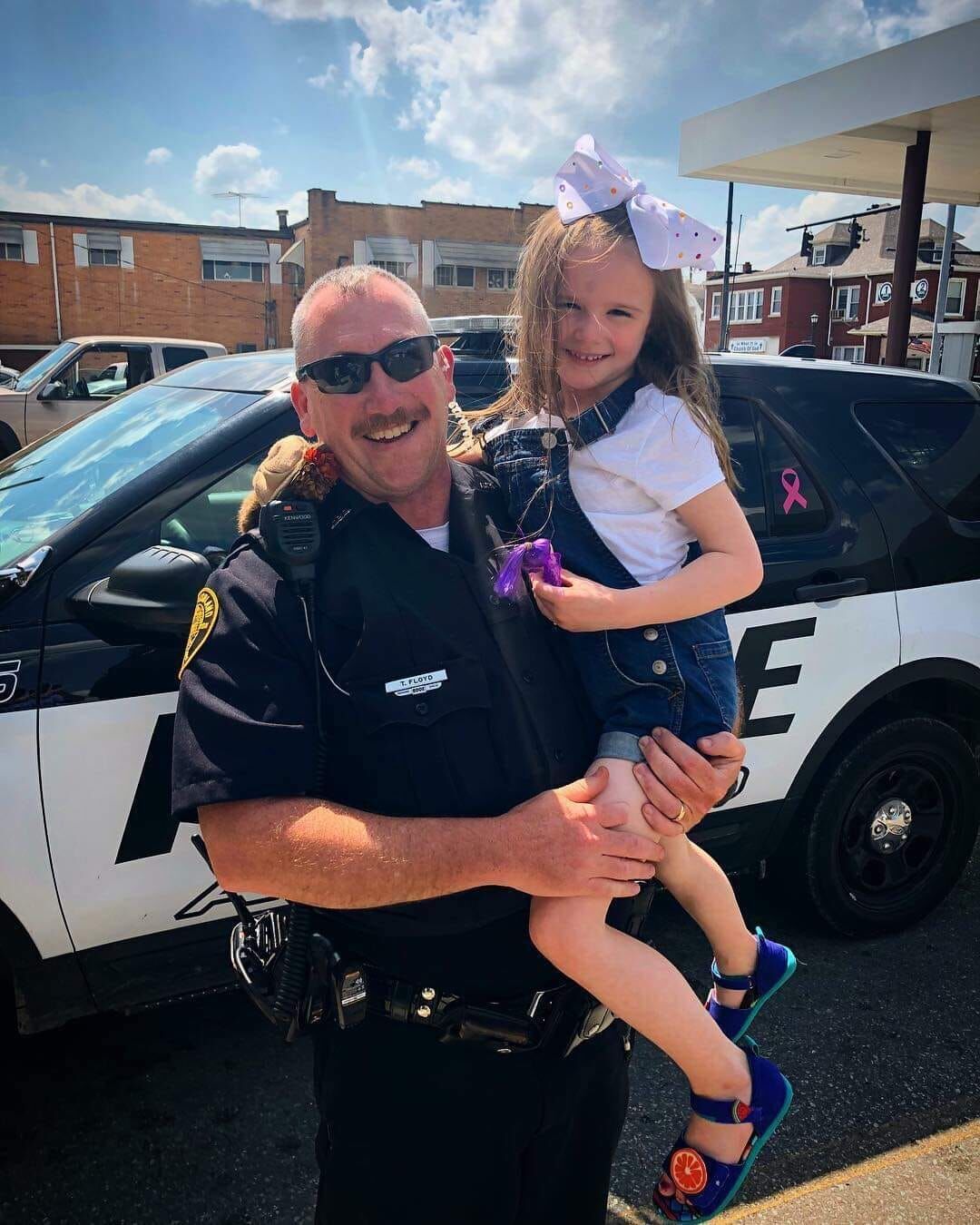 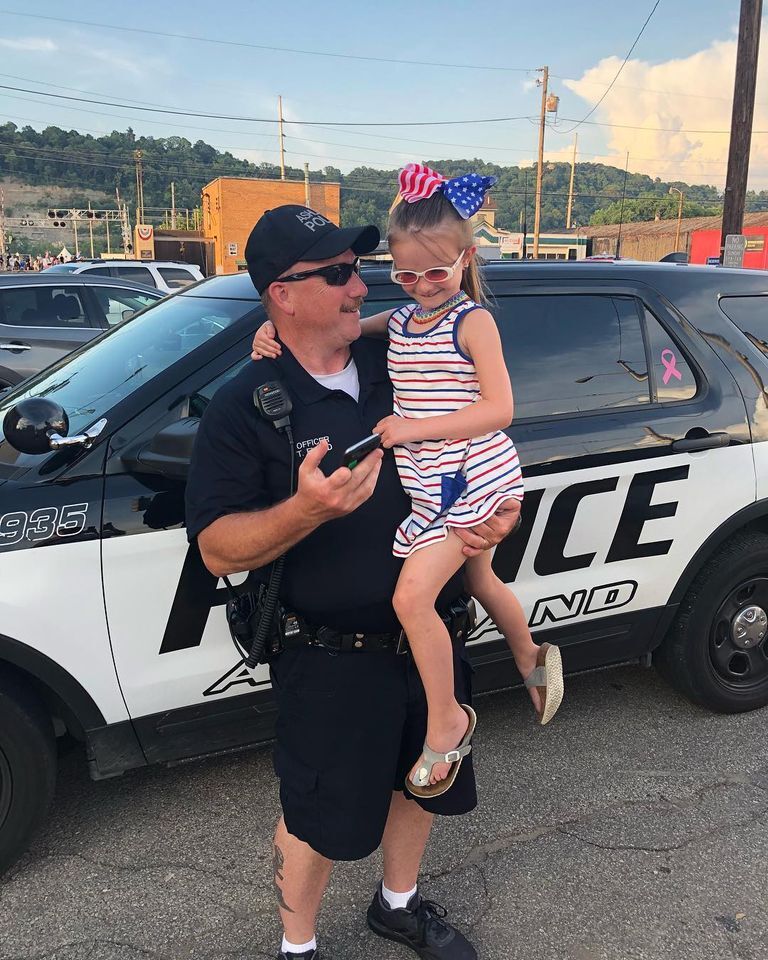 ASHLAND Some might not want to see the police at their front door, but Avery Thompson does, especially when it’s her favorite officer.

Avery, who will be 8 on Sept. 1, made friends with Ashland Police Officer Tony Floyd years ago, when she and her father, Wes Thompson, walked her sister, Madelynn, who is now 11, to school. Floyd was assigned to Hager Elementary School

“Avery would always look and see him, and one day, she asked my wife, Melanie, ‘What’s his name?’ and Melanie said, ‘Why don’t you go over and ask him?’”

When she did, Thompson said, the officer knelt down and introduced himself. “The next day she’d see him and wave and say, ‘Hi, Tony!’” Thompson said. “Next, she started giving him hugs.”

But the following year, Floyd wasn’t assigned to Hager.

“Avery was heartbroken,” Thompson said. “One day, we ran into him at Clark’s Pump-N-Shop and he said he had something for her. It was a little tiny teddy bear about the size of my hand.” Thompson said he got a photo of the two friends, and the Ashland Police Department shared it on social media.

Of course, that bear is now Avery’s treasure.

“She sleeps with it every night. She named it Tony Bear, and if it’s lost, it’s a problem. Nobody sleeps in this house until that bear is found,” Thompson said.

That wasn’t the only serendipitous meeting the officer and girl had.

“We started seeing him, running into him,” Thompson said. “We saw him at Movies 10. We were out to dinner and saw him and his family. Every time she would run into him, she would give him a big hug.”

Floyd and his family attended Tammy Jo’s Studio’s presentation of “The Nutcracker” to see Avery perform.

But Avery and Floyd have a tradition.

When she was ready to start school, she mentioned how she’d like for him to be there, as he was when she and her father walked her sister to school at Hager Elementary.

This year, Thompson said, he thought it would be different, as COVID-19 had the girls staying home for their lessons. Besides, the families had planned to have dinner together and those plans were ruined by the coronavirus.

“My wife and I thought, ‘We need to write Nancy (Floyd’s wife) on Facebook, so I wrote ‘Avery misses Tony,’” Thompson said. “Thirty minutes later, Tony is at our front door, had his mask on, and we got a picture on her first day of school with Tony. This person we’d never met is suddenly an important part of our family.”

Nobody knows why Avery was drawn to the police officer, or him to her.

“He knelt down to her. I was just one of those things, but my wife and I are happy Avery will grow up with a positive image of a police officer. This is what it should look like,” Thompson said, noting he hopes Floyd can be there for every first day of school for Avery. “I can’t imagine as long as we live in Ashland and Tony does, too, I can’t imagine this not carrying on.”