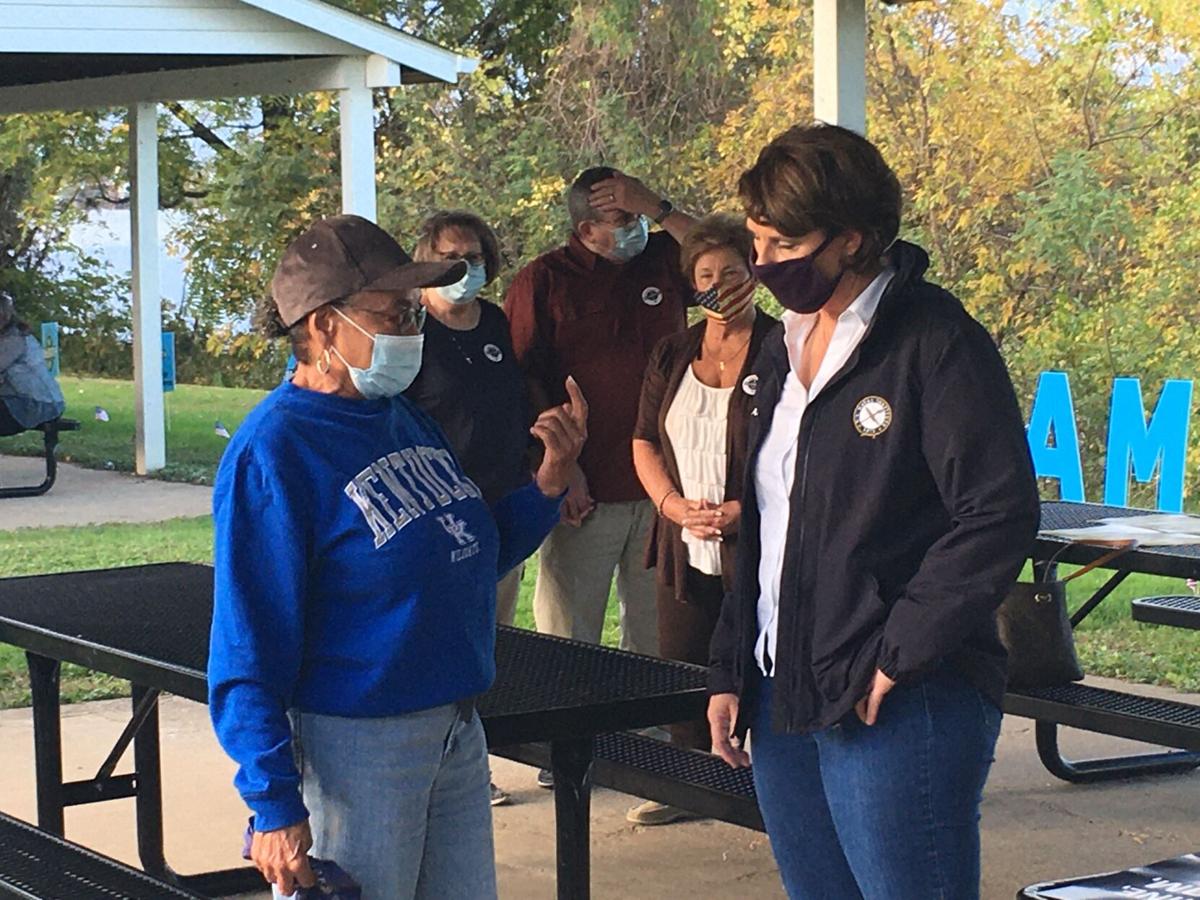 Amy McGrath, who is running for U.S. Senate against Mitch McConnell, visited Greenup and Olive Hill on Friday. 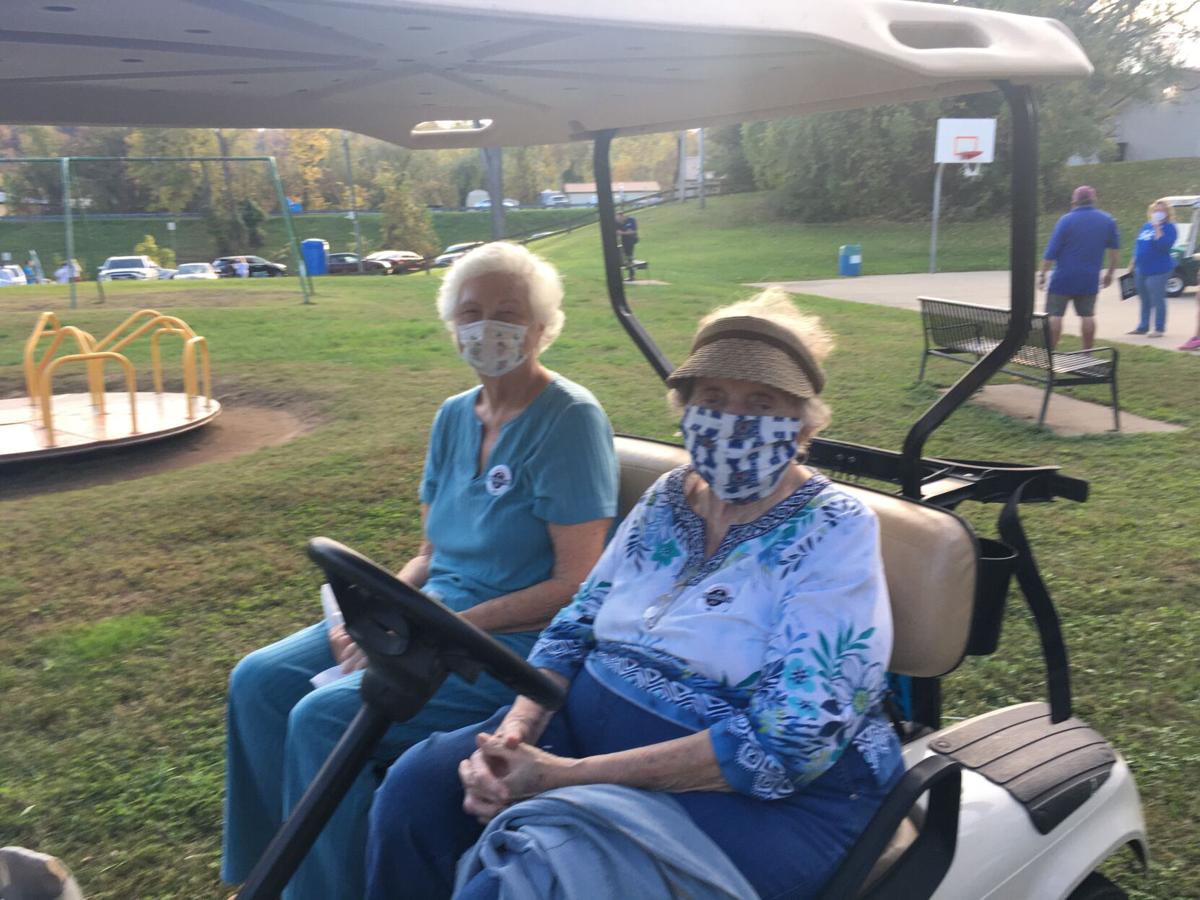 From left to right, Geri McBrayer and Mary Ellen Hieneman show their support for Amy McGrath on Friday.

Amy McGrath, who is running for U.S. Senate against Mitch McConnell, visited Greenup and Olive Hill on Friday.

From left to right, Geri McBrayer and Mary Ellen Hieneman show their support for Amy McGrath on Friday.

The spacious, outdoor venue made social distancing possible, and the crowd observed other COVID measures such as the wearing of masks. Some members of the crowd had taken advantage of mail-in voting, but still showed up to offer support and encouragement to their candidate.

Mary Ellen Hieneman was one of those who had utilized the mail-in voting method. Hieneman said she supported McGrath on all of the general issues. “I think she will do a very good job,” Hieneman said of her candidate. “And one of the biggest things is we need a change. And she has been a good Democrat her entire life.”

Geri McBrayer, Hieneman’s friend, said she had voted for McGrath as well. “I’m for Amy,” she said. “And I am not for Mitch. We need a change.”

McGrath took the time to speak to most of those present and paused to take selfies with individuals in the crowd as well before giving a short speech highlighting her campaign.

“It’s a lovely night,” McGrath began. “But you do know our country is in peril, and that’s one of the reasons I am here. I have been trying to speak with as many Kentuckians as possible, and trying to inspire you to vote,” McGrath continued. “I want to inspire you to help with this campaign, and stress how important this election is.

“2020 is the most important election of our lifetime,” McGrath told the crowd. “And those of us in Kentucky, we can change the trajectory of our country for the better. We can change it if we can get rid of Mitch McConnell. Voters in Idaho and Wisconsin, they can’t do that. Only we can do that. Because he is uniquely our responsibility.” McGrath listed her views on the problems she believes her opponent had caused and outlined her own strategy to fix those problems.

McGrath said it is her goal to be a Senator who puts Kentucky first, and one who does not play party politics. The current climate of the Senate, she said, was polarized, party-centric, and dysfunctional; and this is something she said is a direct result of Senator McConnell’s leadership. Symptoms of the Senate discord, she said, are the decline of Kentucky’s signature businesses and the shipping of jobs overseas.

McGrath’s plan to fix the problems in Kentucky include an investment in repairing infrastructure, combating the opioid crisis, fighting corruption and make sure affordable healthcare is available to everyone who needs it.

The path was clear, she said, but it required commitment and reinvestment in the state to fix everything from the lack of reliable broadband to education. McGrath stressed that what was needed was leadership that believed in Kentucky — something she said it does not now have — to revitalize the state and bring it forward into the future on an even footing with other states.

Estle "Joe" Hutchison Jr., 93, of Greenup, Kentucky, passed away Tuesday, November 24, 2020, at Community Hospice Care Center in Ashland, Kentucky. Mr. Hutchison was born May 10, 1927 in Cabell County, West Virginia, a son of the late Estle Clay and Mable Jenkins Hutchison. He was a United S…

Theresa passed away peacefully after a brief illness at Rockingham County nursing home in Brentwood, N.H., at the age of 93. She was the wife of George Bonnevie, who predeceased her in 2004. She is survived by her children, Arthur and his wife Patricia, Richard and his wife Andrea (predeceas…