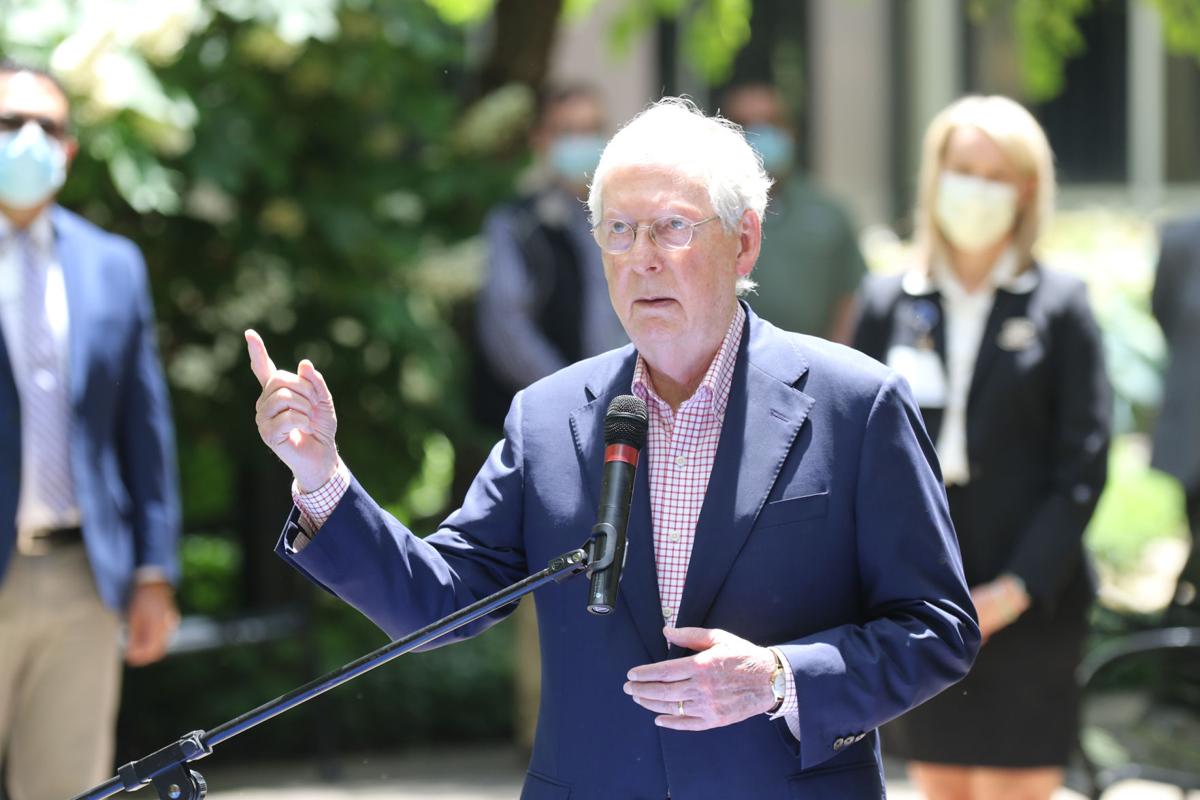 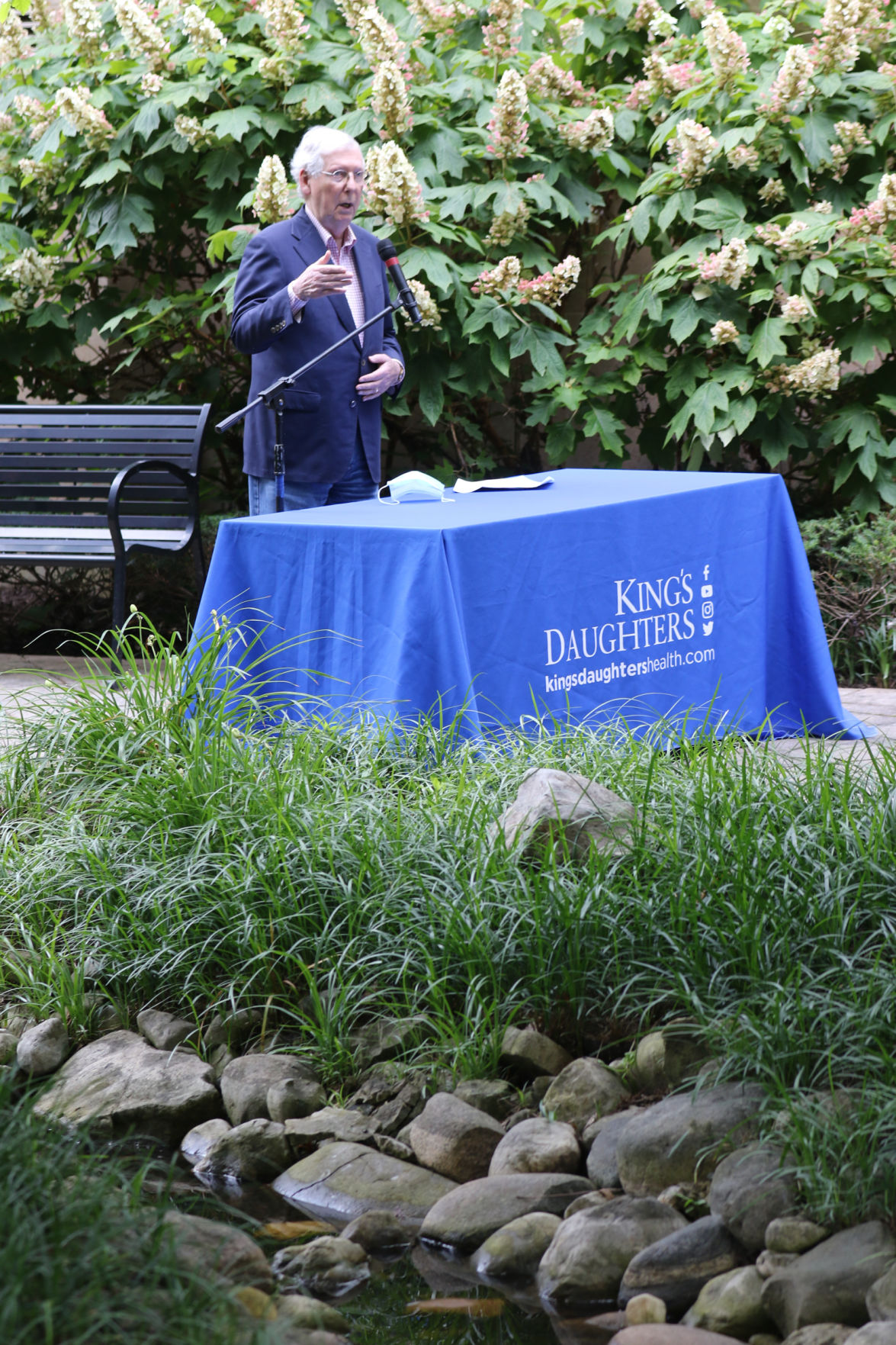 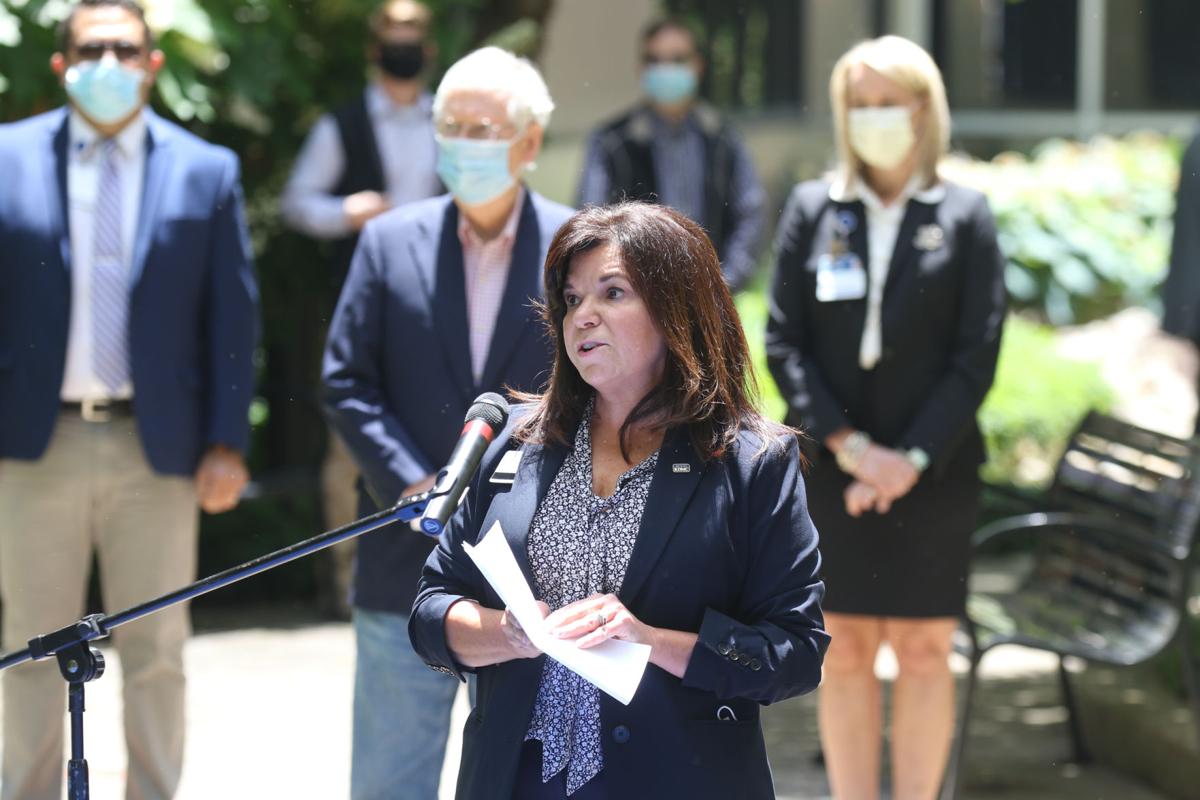 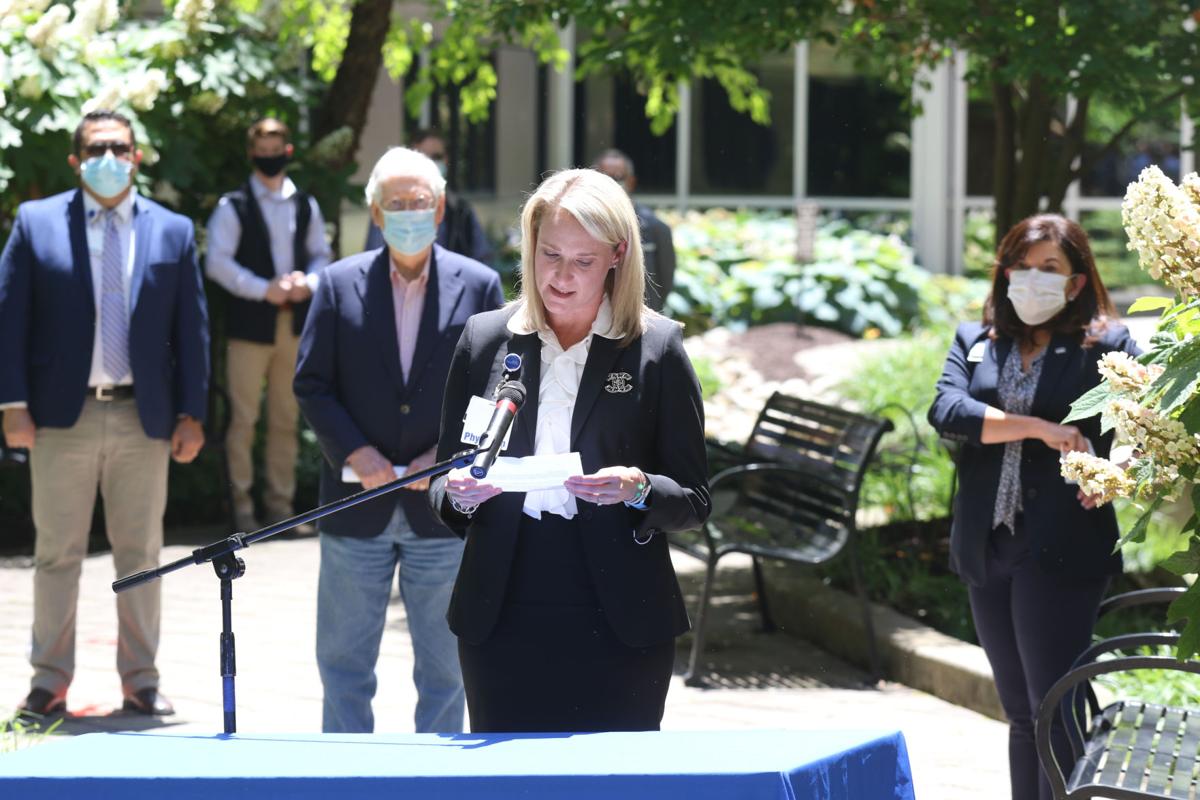 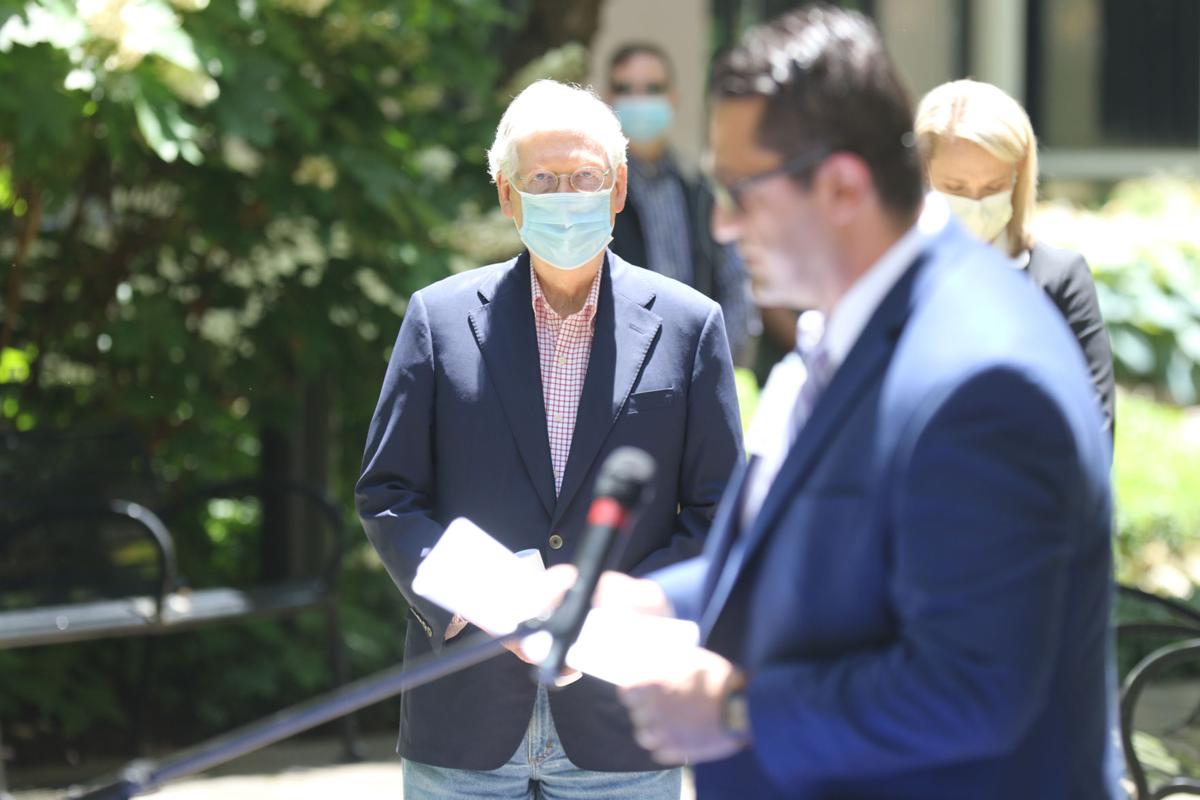 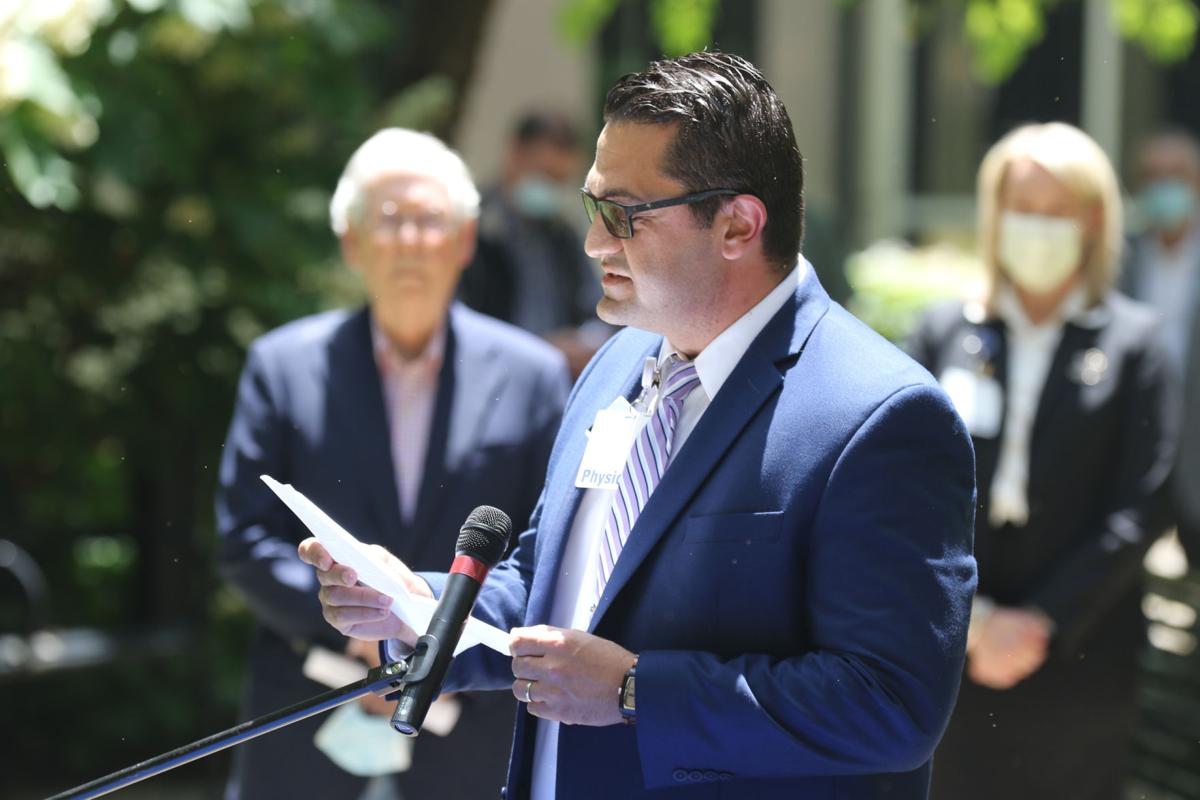 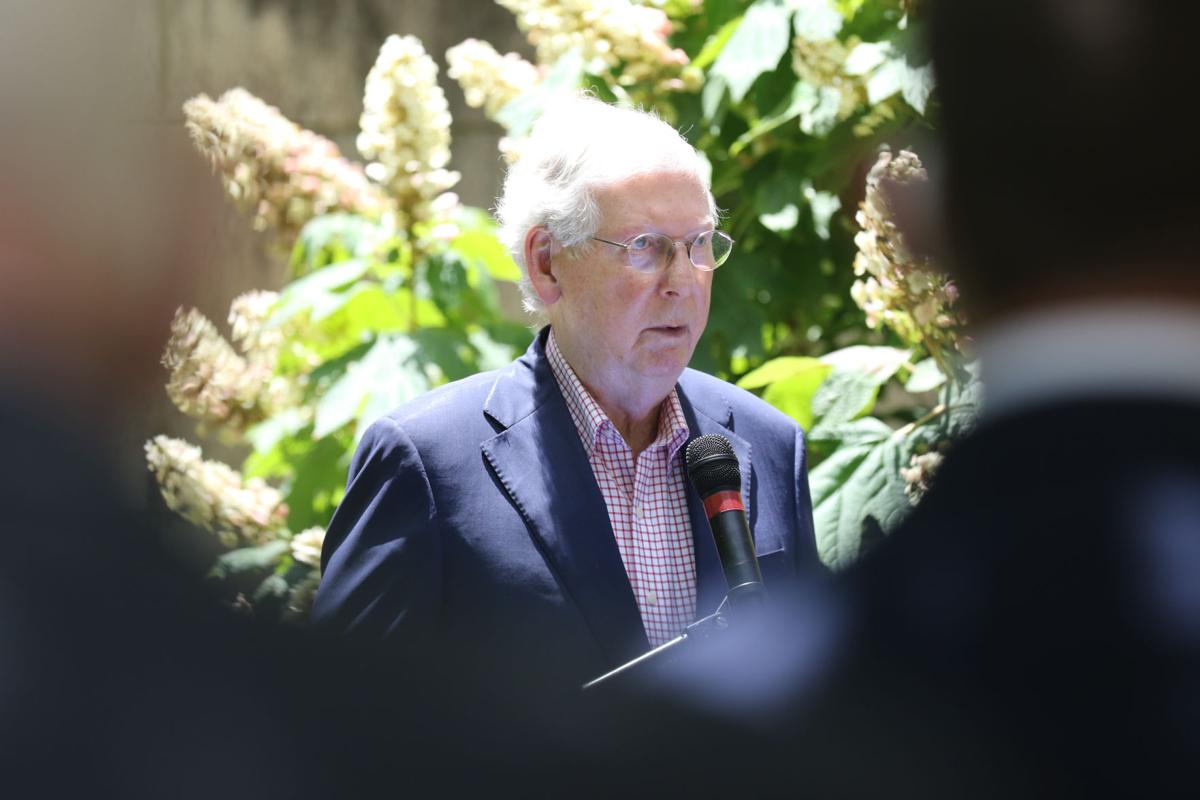 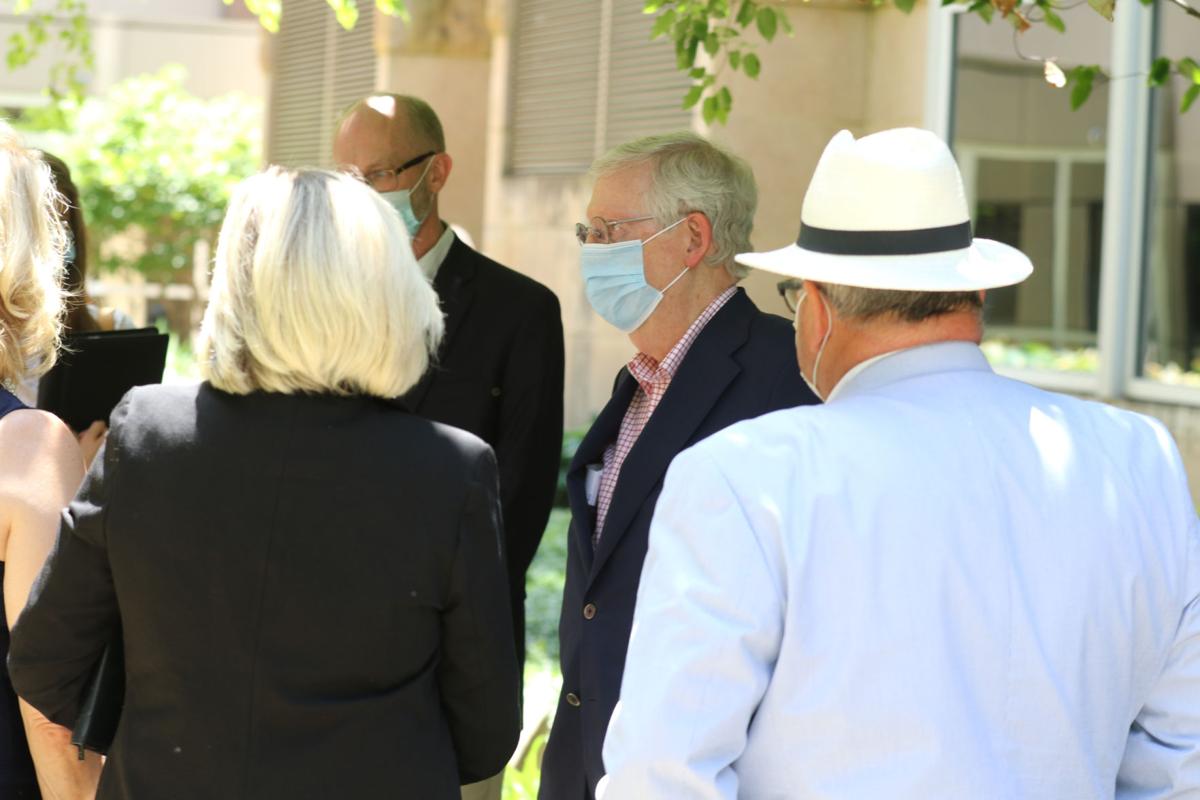 ASHLAND Senate Majority Leader Mitch McConnell visited King’s Daughter’s Medical Center on Friday to discuss the CARES Act, and the impact it has and will have on health care in Kentucky.

Kristie Whitlatch, KDMC’s president and CEO, thanked McConnell for his leadership and for coming to Ashland during a busy time.

As part of that response, Whitlach said KDMC, under the direction of Dr. Charbel Salem, redesigned its outpatient program using telehealth, and increased from virtually zero telehealth patient visits to addressing more than 40,000 patients’ needs through that program.

Whitlatch also recognized and praised local first responders and health care professionals for their service to the community.

“Heroes do work here. They always have,” she said.

Whitlatch credited McConnell for his quick action on the CARES Act, which allowed KDMC to focus fully on how to meet the pandemic challenge and protect area residents, she said.

“Rural health care was at a fragile point before COVID-19, “Whitlatch said. “And without the over $14 million received from the CARES Act as well as other funding, King’s Daughter’s would not be in the position it is today. The assistance was available so quickly that our focus was only on doing what was right for our patients and our community, and not worrying about if doing the right thing today would put tomorrow in jeopardy.”

McConnell first spoke to the gathering about the significance of Friday’s date.

“This is an important day in American history,” McConnell said. “It was on this day in 1865 that Union soldiers showed up in Galveston, Texas, and told the last people still in bondage that they were free,” McConnell said. “That was two years after the Emancipation Proclamation, but it was an important day in American History. And given the demonstrations we have seen in the streets across the country and around our state, I wanted to call attention to that for all of us. As we continue in our country to wrestle with our original sin of slavery, we can continue to try to get better. In recent weeks we have seen our remaining challenges on full display, but one thing I can see in America is always striving in the direction of getting better.

“I am here today to thank the wonderful people here who had a double challenge,” McConnell said. “As you know, with Bellefonte closing, the overload of that closure onto King’s Daughters is pretty obvious to everyone here. And they were concerned also with COVID-19, as we all were. And there were several other things which made the challenges worse.”

The 36-year senator pointed out that hospitals make most of their revenue from elective (almost any procedure deemed not life-saving) procedures, which were eliminated during the mandated lockdown.

“Fortunately, here in Boyd and Greenup County, the overload (of COVID patients) didn’t occur. But the fear of overload shut down those procedures. This of course sent the bottom line straight over into the tank,” McConnell said.

McConnell said the economy went from the best it had been in 50 years to a level near what was seen during the Great Depression. As the country reopens, he stressed the economy should not be compared to what it was pre-pandemic, but rather should be examined based on growth seen from the worst month through the first month of reopening. McConnell said CARES was a much-needed emergency measure. But he suggested subsequent measures should be taken based upon how well America is doing after reopening.

“The question was what we could and should do about it,” McConnell said. “With the economy shutting down and sending everybody home, only the federal government had the capacity to ‘flood the zone,’ if you will, with money.”

McConnell said he was pleased the CARES Act passed without a single dissenting vote when it was presented.

“Overall it dumped out $11 billion in the Commonwealth,” McConnell said. “For hospitals, across the country we allocated $175 billion. Looking at Kentucky specifically, $5 billion of the $11 billion went to health care providers. At King’s Daughter’s, it was $14.2 million right here. … In the community outside the hospitals, $1.9 million went to Ashland Community and Technical College, $487 million for local housing programs, and $30,000 for the Ashland airport.

“The economy is opening up,” he continued, “and these people here will tell you they are glad to have elective surgeries back. Not only because it helps finances, but there are people who have been waiting for months to have their health care needs met.“

McConnell said there are signs that “we will have a pretty significant economic comeback.”