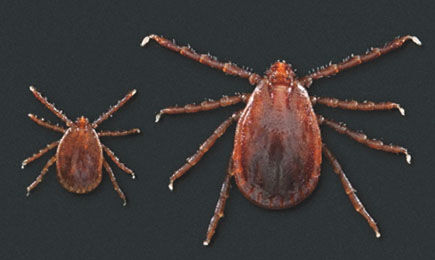 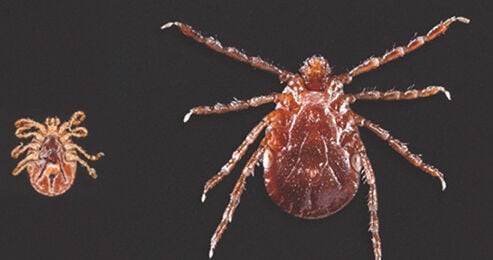 Underside of the Asian long-hrned tick.

Underside of the Asian long-hrned tick.

We have a new exotic tick confirmed to be in three counties in Kentucky. And not only in the state, but two of the confirmed counties are in eastern Kentucky —  Floyd and Martin. The other county is Metcalfe in far western Kentucky.

The culprit is the Asian longhorned tick. They are native to China, Korea and Japan and new to the United States but have already been found in 12 states, all but one (Arkansas) east of the Mississippi River. They have also spread to Australia and New Zealand.

They are known as serious pests on livestock (cattle, sheep, goats, chickens and horses), pets and humans. They also thrive on a variety of wildlife, including deer, raccoon, opossum, coyote, elk, groundhog, black bear, Canada geese, rabbits, skunks and red tailed hawks. Probably many others, too, but they haven’t been found or confirmed on them yet.

The left picture shows the top of the nymph and adult Asian Longhorn ticks; the right shows the underneath of the same ticks.

These ticks are small reddish-brown with no distinguishing markings. Unfed adults are smaller than Lone star and black-legged deer ticks. They are capable of spreading disease, but none they are known to spread in their native areas has been found here.

One reason they can build to large numbers is  females can lay fertile eggs without a male. One female can create a very large population of ticks in a short period of time. Potentially, there could be thousands on an animal.

It is known or suspected as a vector for several viral, bacterial and protozoan agents that can be important in livestock. Ticks that are found in the United States continuously being tested for germs that could be harmful to animals.

When you are out in tick habitat, be sure to protect yourself. EPA approved insect repellent and .05% permethrin treated clothing are effective personal protection measures against these Asian longhorned ticks.

Also wearing light colored clothing makes them easier to spot. Tucking your pants legs into your socks also helps, as does checking yourself.

I am highly sensitive to chiggers. I have not had an issue with them for many years, since I try to avoid likely places  they may be. However, I have been very unsuccessful this year.

For those of you who have never had the unfortunate occasion to experience these little devils, I wish you continued success. For those who have, I sympathize. But what exactly are chiggers?

Chiggers are actually the immature stage of certain mites. They are very, very small, almost impossible to see with the naked eye. If you do see them, they appear as a very small red dot, much smaller that the head of a pin.

They tend to hang out in the wild in overgrown brushy or grassy areas, especially if there is an abundance of small rodents, like mice and rats. They also like to hang out in shady, humid areas, like creek banks, in berry thickets (which is why I rarely pick blackberries) and under shade trees.

When they start to feed on the body, they release and enzyme to liquify skin cells. This enzyme is what causes the rash, irritation and intense itching that starts a few hours after they start to feed. Contrary to popular belief, they do not burrow into the skin, do not feed on blood and, good news, do not carry disease.

Usually where they like to feed is where the skin is thin, tender, in wrinkles or where clothing fits tight, since this causes moisture from sweat, and they like humidity. They can stay attached for three or four days if left undisturbed. (How you could not disturb them with your scratching is beyond me.)

Ways to avoid being chigger food is simply to avoid areas they like to be in. Since this is often not possible, wear long pants and all clothing should be of a very tight weave if possible. Also showering immediately after getting in can help a lot by washing them off your body.

A couple of ways to help alleviate the extreme itching is to apply anti-itch medications such as hydrocortisone, Calamine lotion, etc. If severe, a doctor may recommend something like oral Benadryl or a prescription strength steroid cream.

In late April or May, a single spray of bifenthrin, carbaryl (Sevin), cyhalothrin or various brands of permethrin can be all that’s needed. But with severe infestations, multiple sprays may be needed. And be sure to keep children and pets away from the sprayed area until dry. Also, make note that the sprays listed above are registered for use for this purpose in Kentucky only. If you are not in Kentucky, check with your local Extension Office to see what is allowed in your state.

Around the house, spraying is a short-term solution. Long-term solutions include getting rid of high grass and weeds and control of rodents. These are much more effective.

As always, read and follow the directions on any insecticide you use. After, that label is the law.