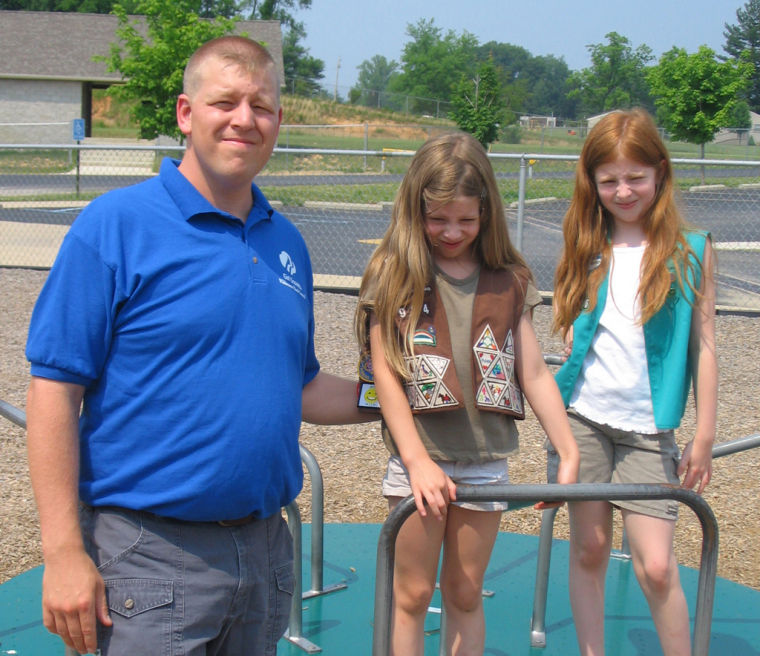 Jay Nance, is the leader of Girl Scout Troop 1036, of which is daughter, Jessica, 9, right, is a member. Daughter Jamie, 7, center, is a brownie in troop 121; mom Ursala Nance is the leader of her troop. 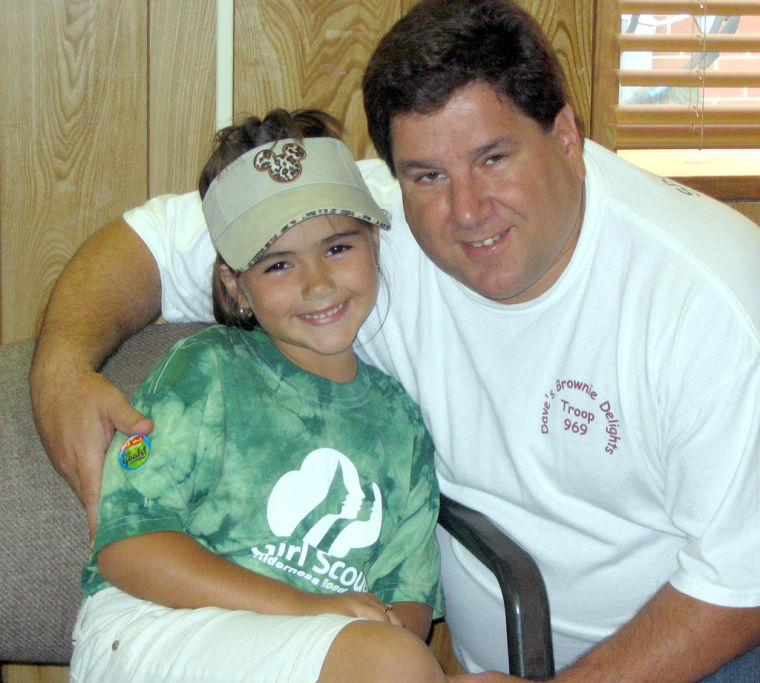 Jay Nance, is the leader of Girl Scout Troop 1036, of which is daughter, Jessica, 9, right, is a member. Daughter Jamie, 7, center, is a brownie in troop 121; mom Ursala Nance is the leader of her troop.

Girl Scouting isn’t just for girls — it’s for dads, too. In Boyd County, at least two fathers of Girl Scouts are involved in their daughters’ troops as leaders — one at Russell Primary School and one at Holy Family School. Jay Nance There was little doubt about the exta-curricular activities of Jessica and Jamie Nance. Girl Scouting was almost a certainty: their mother, Ursala, a veterinarian, was a Girl Guide in her homeland of New Zealand, and their father, Jay, had been involved in Boy Scouts since he was 10 and led troops as an adult. When Jessica, now 9, was old enough to join the Daisies as a kindergartener, Mr. Nance attended meetings with her. The next year, when her Brownie troop needed a leader, he was there. “I was blessed to be a stay-at-home dad and had the time to get involved in the Girl Scout troop,” he said. When school starts, the 9-year-old will enter the Juniors and her father will be troop leader. His daughter, Jamie, 7, is a brownie in a troop led by Ursala Nance. The Nancy girls are still young scouts, so projects they’ve been involved in have been simple. They participated in a food drive in which canned edibles were collected and they helped clean up the Flatwoods City Park. As they get older, Mr. Nance said, the opportunities will become more exciting and adventurous. “I like scouting. I think it’s a lot of fun,” he said. “It’s unique that I get to spend extra time with Jessica.” Although it’s unusual to encounter a father who is a Girl Scout troop leader, Mr. Nance said he has had no problems or complaints from mother or other troop leaders. “They’ve all been really friendly and welcomed me,” he said. “It might be unusual, but once they get to know me we’ve had good relationships.” Mr. Nance continues to be involved in Boy Scouts as the leader of a Venture Crew, a group for 14 to 20 year olds that offers high-adventure programs, and he is co-director of the summer program Camp Oyo near Portsmouth. Being involved in his daughter’s troop has had rewards for him, too, Mr. Nance said. “It’s neat to see the girls grow and gain new skills and progress.” Dave Ward When Dave Ward’s daughter, KayLynn, told him she wanted to join the Girl Scouts, he was all for it. But then they learned there was no troop for her to join. “I said, ‘What do you have to do to have a troop?’ and found out they needed a leader,” Ward, 47, said. “They said, ‘Do you want to be the leader?’ and I said, ‘Sure, I’ll do it.’ “They told me I needed more than five girls to form a troop, and I thought, ‘We can round up more than five no problem.” Ward started the Daisy troop at Holy Family School and earned himself the nickname Daisy Dave. “One woman heard her daughter call me Daisy Dave and she came over to apologize, but then her husband came up and said, ‘Hi, Daisy Dave!’” Now, Ward’s shirt reads “Dave’s Brownie Delight,” as he leads his daughter’s Brownie Troop 969 with 15 members at Holy Family School. Although he wasn’t a Boy Scout, Ward has always been involved in his children’s activities. “I coached Little League, I took my other daughters to gymnastics,” he said. “At my age, I know this is my last one and I want to take the time to appreciate and really get involved.” The troop has been involved in a wide variety of projects, including a coat drive, Thinking Day, Let’s Pretend Day and Girl Scout cookie sales. Ward has brought a new concept to the Girl Scouts: sponsorship. He approached area business to recruit their help with projects and has found much success, enabling the troop to do more service projects, like taking centerpieces and gifts and Christmas to Safe Harbor. He wears a Dave’s Brownie Delight T-shirt bearing the names of the sponsors. As his daughter grows and moves on to other troops, Ward said he plans to stay involved because Girl Scouting is such a worthwhile activity. “It teaches discipline and respect and how to work together,” Ward said. “It helps them gain confidence and learn to speak to people but also to have fun.” There’s also the personal satisfaction a troop leader receives. “It’s wonderful when you have a bunch of little girls who look up to you and make you feel as important as you make them feel,” he said. “I feel like a father each one of them.” His daughter likes having her father involved, too. “It’s nice because I like my daddy around me,” she said.