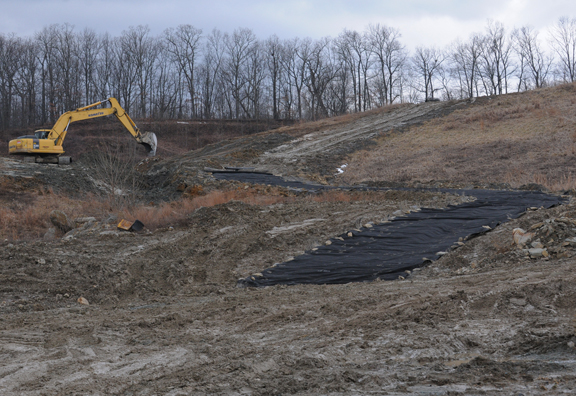 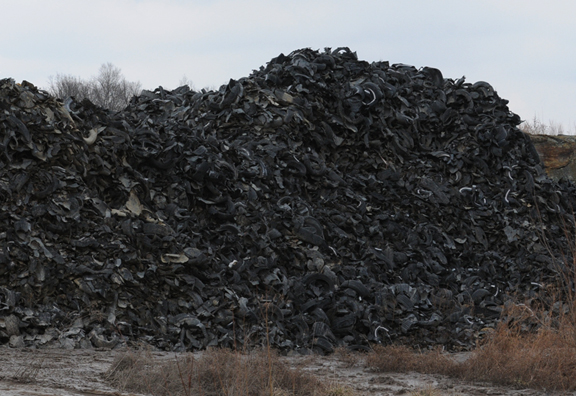 Part of a pile of shredded tires still on the former Cooksey Brothers Landfill that will be buried during a new procedure being started. 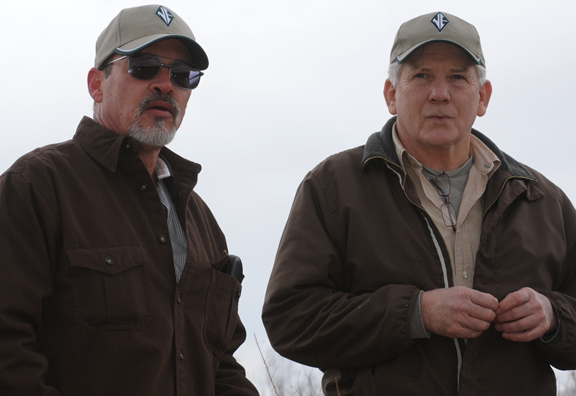 Doug Smith and Dale Webb look over the recovery work in progress at the former Cooksey Brother Landfill.

Part of a pile of shredded tires still on the former Cooksey Brothers Landfill that will be buried during a new procedure being started.

Doug Smith and Dale Webb look over the recovery work in progress at the former Cooksey Brother Landfill.

An agreement four years in the making has led to work at the former Cooksey Brothers Landfill, which regulators say will reduce pollution and end a long-standing fire hazard at the site. The planned improvements are also aimed at cultivating a source of methane production, proceeds of which could be used to further close the site, according to owners. Landfill owner Doug Smith entered into an agreed order in November with the Kentucky Energy and Environment Cabinet’s Division of Waste Management and Indian Harbor Insurance Co. to spend $1.8 million to close the site. The work will be paid for using the remaining funds in the landfill’s insurance policy. A more complete closure plan for the landfill was completed by Nesbitt Engineering Inc. but that plan would cost an estimated $8 million, according to Smith and Anthony Hatton, director of waste management division. There simply wasn’t any money to complete that plan. “What we have decided to do is identify those aspects of the site that are more environmentally pressing issues and address those in that order,” said Hatton. Mitigating the fire hazard of unused tires and treating leachate from the site are the top two priorities, he said. The agreed order is the result of years of failed negotiations and disagreements between the state, Smith and the insurance company following a fire at the site in January 2006. The fire, which burned for several days before teams from the Environmental Protection Agency were able to extinguish it, is believed to have been started by lightning. Mounds of shredded tires, which were used to cover garbage at the landfill because the site lacked adequate dirt, fueled the fire. The tires were approved as an alternate daily cover by the waste management division, in what some former regulators and Smith have called “a bad decision.” After the fire, the landfill was temporarily capped with dirt, but large piles of shredded and whole tires continued to sit unburied at the site, creating a fire hazard. Before the fire, the landfill had been a permitted tire transporter. Following the fire, the EEC revoked the permit and hired Martin Tire Operations LLC of Marion to remove and process the stockpiles of waste tires at the landfill, spending $1.5 million, including a $300,000 surety bond on the project. That contract, let in February 2006, is a sore point for Smith, who points out the state paid the company $1.5 million but it is less than 20 percent of the tires. “We’re having to come in and clean up their stuff,” Smith said. Under the new agreement, Smith has hired a contractor to bury the tires remaining at the landfill and install a liner around the base of the opened cell. A second phase of the project will concentrate on treatment and disbursement of leachate from the landfill. That portion of the project is still in negotiations. Currently, leachate at the site is being stored in tanks but has been seen seeping from the landfill into a stream and a retaining pond. Smith said capturing and applying the leachate is a key component in cultivating usable methane at the site. During a tour of the landfill early this month, workers were battling mud but actively scraping back the face of the landfill. In addition to burying large truck loads of tires, they were installing the liner around the base of the landfill. Smith said the liner is key to containing any methane being produced by the rotting garbage in the landfill. His hope is that the methane at the site can be captured and proceeds partially used to pay for the remaining work to close the landfill. Smith also hopes to turn a profit from the site. He purchased the landfill from its previous owner for $10 with the intent of using the site to produce methane. “If we don’t come up with a way to close this thing properly it is not going to get done. So that is what we’re doing, we’re building the foundation to do this thing properly and Tony Hatton is the one who saw the beauty in doing that and Doug,” said Dale Webb, who has assisted Smith at the site for years and took part in many of the meetings with state and federal regulators. Webb is also the owner of Oakenstone Construction and Demolition, the company hired by Smith to complete the first phase of closure work expected to continue until June. “We’ve been nervous about getting something done and it was getting frustrating the time it was taking to make a logical, common-sense, practical decision that could have been made a long time ago. We’re glad that its finally happening,” Webb said. He said it’s impossible to know how many tons of tires have been buried already and how many remain. The tires are being buried in 10-foot lifts with 3 feet of dirt and mud between each lift, according to Webb.