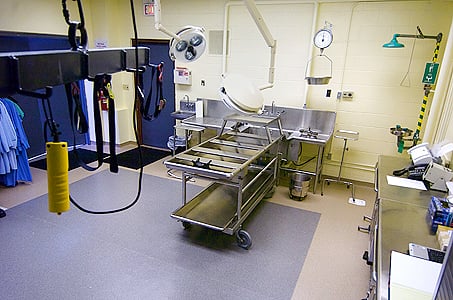 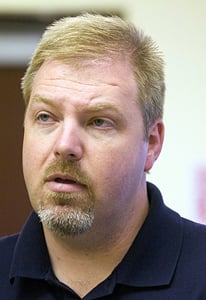 It’s not a place you’ll ever find on any tourist maps of the area, for obvious reasons. Still, it’s one that officials say was much needed and will serve an important purpose. The new Boyd County Morgue began operations last week, making Boyd one of only a handful of counties in Kentucky with such a facility. The morgue is in the basement of the former Ashland-Boyd County Health Department building at 1401 Blackburn Ave. One of the downstairs rooms in the building, which also houses the Ashland Boyd County Catlettsburg Office of Emergency Management, was extensively renovated to accommodate it. According to Boyd County Coroner Chris Stewart, the facility will save the county money on transportation and storage, as well as allowing more privacy for the family members of deceased. Previously, bodies were stored in the morgue at King’s Daughters Medical Center, but the hospital has limited space. That meant bodies frequently had to be moved for storage or for post-mortem examinations, Stewart said. Also, in the past, if a body could not be readily identified, it had to be sent to the state Medical Examiner’s Office in Frankfort for storage, which cost the county about $600. The new morgue can hold up to 15 bodies. In addition to a cold-storage facility, it has an autopsy table and sink and an electric lift. As a lay coroner, Stewart does not actually perform autopsies, although he and his deputies do conduct post-mortem inspections and perform tasks such as drawing body fluid samples for toxicological testing. However, Stewart said the morgue could be used as a location for an autopsy should the need ever arise. He said he had hopes the morgue could one day serve as the basis for a regional state medical examiner’s office. Kentucky has four of those, but none are east of Frankfort, he said. Work on the morgue began last year. The total cost of performing the renovations and equipping the facility was amazingly low — about $12,000. That was because most of the items were donated and the work was done by county employees Stewart said. “The only thing we had to contract out was the plumbing,” he said. A donor who asked to remain anonymous provided funding for the autopsy equipment and cold-storage unit, he said. Physical changes to the building included installing a set of double doors and building a concrete vehicle ramp so vehicles can be backed up to the morgue for loading and unloading. Seamless, nonporous flooring, the same type as found in hospitals, also was installed, Stewart said. One function the new morgue will allow to be performed locally, rather than in Frankfort, is identification of bodies through dental records. One of his deputies, Dr. Ralph Beadle, is a certified forensic odontologist, he said. KENNETH HART can be reached at khart@dailyindependent.com or (606) 326-2654.