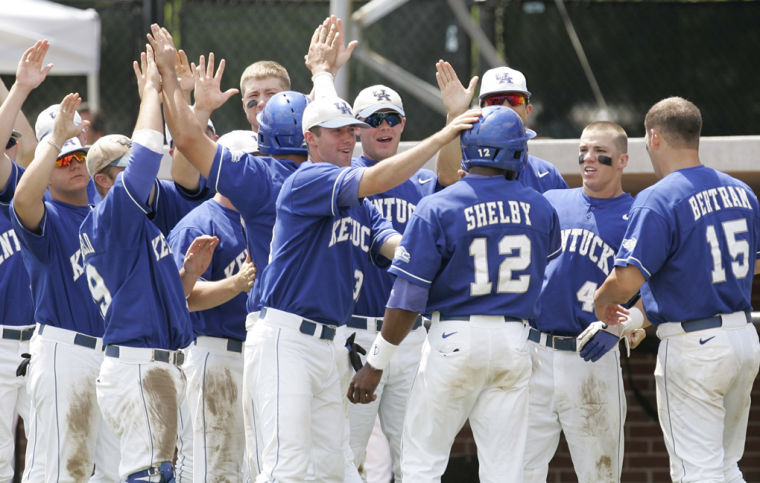 Kentucky's John Shelby (12) is greeted by teammates after scoring in the fourth inning against Notre Dame at an NCAA regional baseball tournament Saturday. 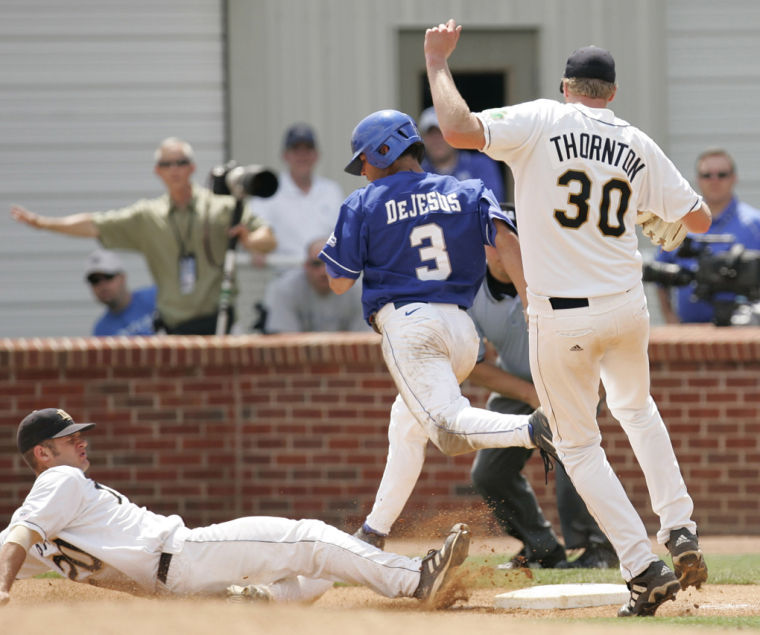 Kentucky's Antone DeJesus (3) is safe at first as Notre Dame's Jeremy Barnes, left, and Tom Thornton (30) mishandle the ball in the fourth inning of an NCAA regional tournament baseball game in Lexington on Saturday.

Kentucky's John Shelby (12) is greeted by teammates after scoring in the fourth inning against Notre Dame at an NCAA regional baseball tournament Saturday.

Kentucky's Antone DeJesus (3) is safe at first as Notre Dame's Jeremy Barnes, left, and Tom Thornton (30) mishandle the ball in the fourth inning of an NCAA regional tournament baseball game in Lexington on Saturday.

Kentucky didn't need Shaun Lehmann's two-run homer to beat Notre Dame Saturday, but after its potent offense went 19 innings without one, it sure didn't hurt. "We know that any moment in time we can come through and score a bunch of runs," said Kentucky third baseman Michael Bertram. "We were just looking for one spark, and Shaun Lehmann gave us that spark today. Our whole morale changed after that." The Wildcat hitters returned to form and Greg Dombrowski pitched a complete game as the Lexington regional hosts eliminated Notre Dame from the NCAA baseball tournament with a 10-4 victory. It was the first tournament win in 18 years for Kentucky (43-16), the regional's top seed. The Wildcats still must string together wins Sunday against Ball State and College of Charleston to advance to a title game Monday. Big East champion Notre Dame (45-17-1), seeded third, lost to Charleston in 16 innings Friday to end up in the elimination game. "It's a weird feeling for us," said Fighting Irish manager Paul Mainieri, who has taken his team to nine NCAA tournaments _ until now, none of them two-and-out. Although the middle of Kentucky's lineup struggled at the plate as it did in a Friday night loss to Ball State, the bottom of the order picked up the slack. Notre Dame starter Tom Thornton (7-3), who had only walked five all year, gave up back-to-back walks to lead off the fourth inning. A sacrifice bunt by Bertram moved them up, and they scored on Billy Grace's sharp single to center. "I just got caught nibbling," Thornton said. "I kind of let my guard down for a second. It cost us in a big way." With two outs, Lehmann's homer to right-center _ the Wildcats' first of the tournament _ drove in two more. Lehmann acknowledged it was a "momentum changer." Kentucky manager John Cohen said he was pleased with the home run but more pleased by the placement. The wall in that area is a shallow 350 feet, and when Kentucky's hitters are on, several balls tend to sail over it. "It's not the fact he hit it a long way, because he didn't," Cohen said. "It's the fact he used the ballpark." Kentucky broke it open with three unearned runs in the sixth against Jeff Manship, Notre Dame's ace starter, who appeared out of the bullpen. With two outs and two runners on, first baseman Craig Cooper's wild throw allowed Bertram to score from second. Antone DeJesus followed with a two-run single. Bertram also had a two-run single in the eighth to give Kentucky its ninth and 10th runs _ six of which were the result of Notre Dame walks. It was the second straight game that Manship had surrendered three runs in an inning. He also gave up three in the Big East semifinal May 25 against St. Johns. Kentucky starter Greg Dombrowski (10-2) allowed only one unearned run through the first six innings before running into trouble in the seventh. Pinch-hitter Matt Bransfield doubled in two but Dombrowski got out of the jam. He gave up nine hits, walked two and struck out four. "I was trying to throw as many low strikes today as possible _ let the other team just pound the balls into the ground," Dombrowski said. Notre Dame's only lead came in the first, courtesy of an error by Bertram, who dazzled defensively the night before. After Craig Cooper led off with a single, Brett Lilley bunted him over to second but was safe on Bertram's throw in the dirt. That allowed Cooper to score later on Steve Andres' groundout. Kentucky had a season-high five stolen bases.

Bruce Adam Edwards 64, of Ashland passed away January 13,2020, at his residence. Bruce was born June 20,1955 Memorial services will be conducted at later date. Services have been entrusted to Caniff Funeral Home in Westwood.

Wayne Broughton 71, died January 16, at Chillicothe,Va. Medical Center. Graveside services will be 2p.m. Sunday, January 19, at Dixon Cemetery in Westwood. Caniff Funeral Home is in charge of arrangements. Condolences may be left at canifffuneralhome.com

Funeral services will be 1 p.m., Jan 20, 2020, at the Advanced Memorial United Methodist Church. Visitation will be after 11 a.m., Monday at the Church.