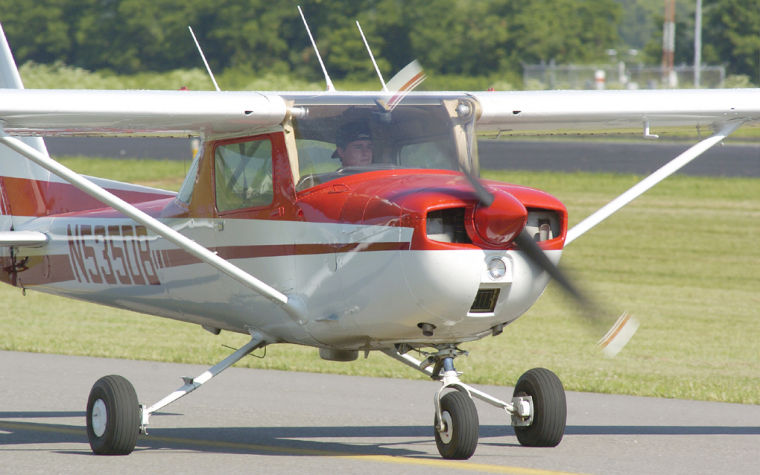 Tyler Jones, 16, of Russell, taxis back to the end of the runway for another takeoff during his solo flight testing at the airport on Tuesday. 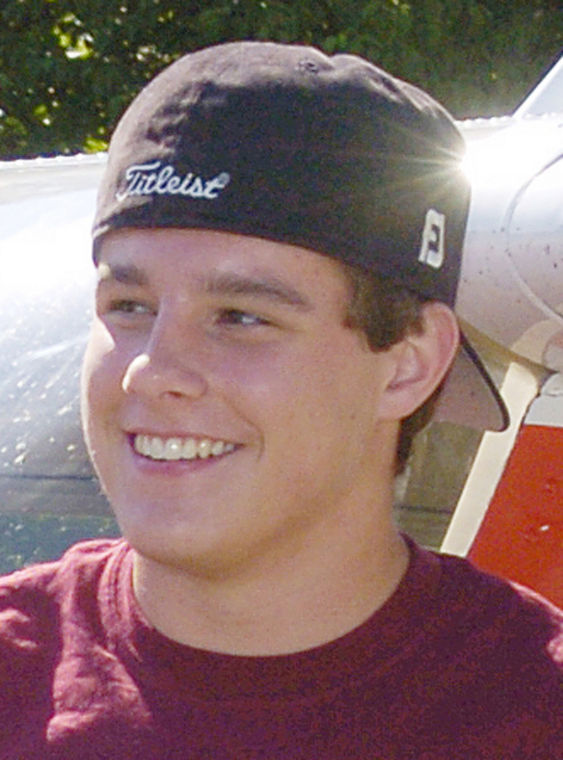 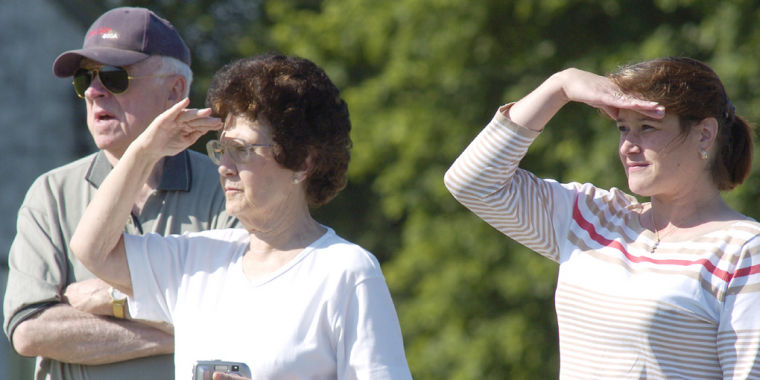 Tyler Jones’ flight instructor C.R. “Dick” Brannock, his grandmother, Cleo Claxon, and his mother, Barbie Duren, watch one of his landings during his solo flight at the Ashland Regional Airport in Worthington on Tuesday.

Tyler Jones, 16, of Russell, taxis back to the end of the runway for another takeoff during his solo flight testing at the airport on Tuesday.

Tyler Jones’ flight instructor C.R. “Dick” Brannock, his grandmother, Cleo Claxon, and his mother, Barbie Duren, watch one of his landings during his solo flight at the Ashland Regional Airport in Worthington on Tuesday.

For the second time in six months, C.R. “Dick” Brannock sent a teenager off into the wild blue yonder Tuesday. Brannock, a retired Ashland Inc. pilot and certified flight instructor, watched from the ground as his young pupil, Tyler Jones, made his first solo flight at the Ashland Regional Airport. Also in the audience were Jones’ mother, Barbie Duren; his grandparents, Norman and Cleo Claxon of Ashland and John and Harriet Jones, whom Tyler moved in with after his mother and stepfather moved to Lexington a year ago because of a job transfer. Tyler wanted to be able to finish school at Russell High, where he plays quarterback and defensive end for the school’s state Class AA champion football team, his mother said. Tyler Jones isn’t related by blood to John and Harriet Jones, but Harriet Jones said she and her husband still think of him as a son. Tyler Jones circled the airport several times in one of Brannock’s planes, a Cessna 150, and executed what appeared to be three textbook takeoffs and landings. But Jones, whose 16th birthday was Tuesday, was critical of himself after completing his solo flight. “I was upset with the landings,” he said. “I bounced ‘em a little bit.” Brannock accompanied Jones on his first trip around the airport, but then got out of the plane. Jones said the small craft “climbed a lot faster” than he was used to with only one person aboard. He also said the bright sun made it “scorching” in the cockpit of the plane. All in all, though, Brannock said his protégé had done just fine. He said there was no way he would have allowed him to solo if he didn’t think he was ready to do so. Jones’ solo flight came after about a dozen hours of flight training, with Brannock in the passenger’s seat. By flying solo, Jones earned the pilot’s equivalent of a learner’s permit. He can now legally fly by himself, but cannot carry passengers. He can test for his pilot’s license after he turns 17 and after he has accumulated 40 hours of flight time. Jones said he fully intended to try for his private pilot’s license in a year. “I’m going to go on with it,” he said. In December, Brannock — who flies a Beechjet out of Tri-State Airport for a bank group headed by Huntington businessman Marshall Reynolds — oversaw the first solo flight of his 16-year-old grandson, Mickey Brown. Brown and Jones are longtime friends and football teammates and attended NASA Space Camp in Huntsville, Ala., together when both were 13. Brown — who’s laid up with a broken leg he suffered in a recent dirt bike accident — kept in touch with his friend via two-way radio during his solo flight. Duren said her son and Brown hung around the airport together a lot when they were younger and that Brannock would often take the two up together in one of his planes. Jones said he became seriously interested in wanting to fly about three months ago and asked Brannock to instruct him. Duren said she was nervous watching her son fly solo. But, she said she had confidence in his abilities and faith in his teacher. After the flying was finished Tuesday, Jones’ family threw a birthday party for him in Brannock’s hangar. His mother baked him a cake shaped like — what else? — an airplane, with “Turbo Tyler” written on it. Brannock presented his student with a framed copy of his pilot’s certificate. Jones’ solo flight was only the beginning of a busy birthday for him. He said he planned to take the test for his driver’s permit later in the day, and he was scheduled to take part in a passing league football game that evening. KENNETH HART can be reached at khart@dailyindependent.com or (606) 326-2654.

Rose Ann (Emnett) Bufe, 87, of Beavercreek, Ohio, formerly of Cleveland, passed away January 2. She was born May 11,1932, in Ashland,Ky., the daughter of the late William and Mayme (Powell) Emnett. In addition to her parents she was preceded in death by her husband of 52 years, Otto, in 2010…