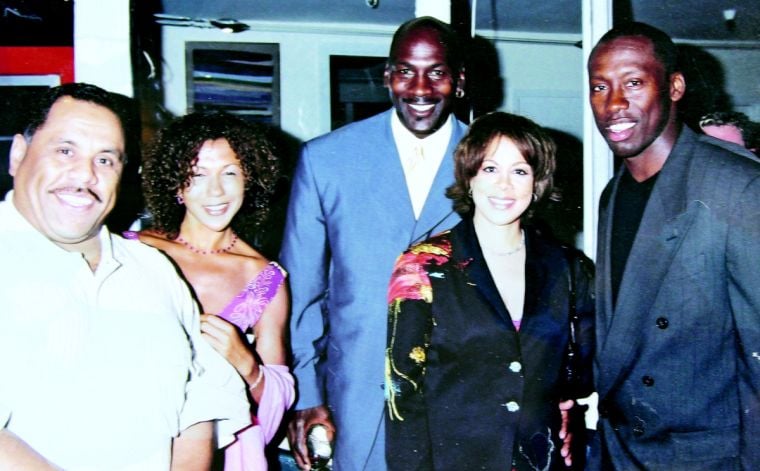 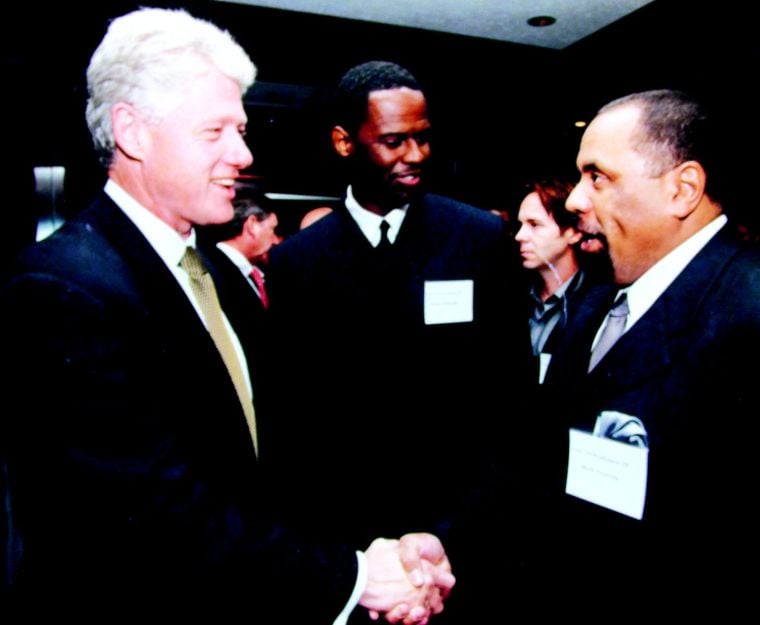 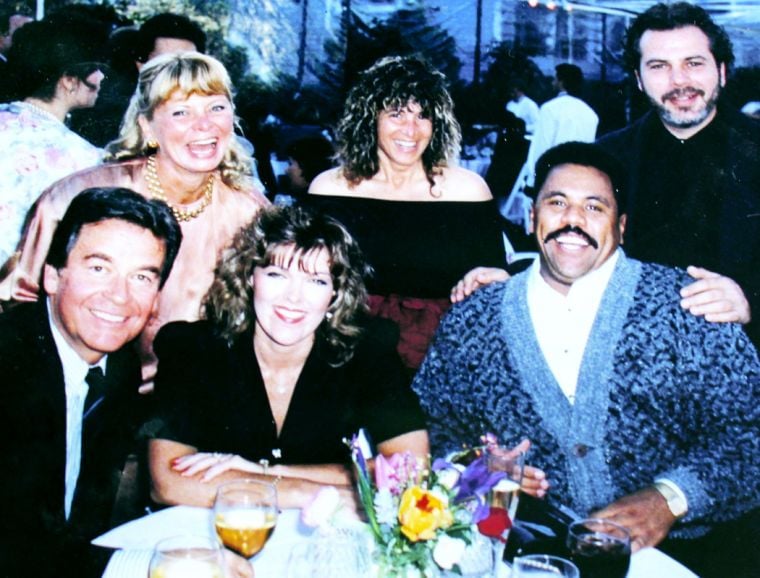 Herb Trawick credits growing up in Ashland, and especially the influence of Tomcat coach Steve Gilmore, with providing him the foundation he needed to build a successful career in the music and entertainment industry.

Trawick, 57, graduated from Paul G. Blazer High School in 1973 and went on to enjoy a career that continues to put him side by side with some of the most influential and recognizable names in entertainment. Born in Canada as the son of a professional football player whose name he still carries, Trawick said his father was recruited by the Montreal Alouttes (or Larks) just before the Cleveland Browns sent him a telegram asking him to be part of the American team.

“They hid the telegram from him,” he said with a chuckle, explaining the Browns’ telegram was only presented to his father upon retirement. Herb Trawick Sr., however, will be remembered as the man who broke the color barrier for Canadian football, as well as providing his son with examples that continue to serve him well. According to Wikipedia, “Much loved by his fans, Trawick's jersey No. 56 is one of seven retired by the Alouettes. Trawick was elected to the Canadian Football Hall of Fame and the Kentucky State University Athletics Hall of Fame in 1975.”

“I was the ‘junior’ of a popular athlete. He had retired by the time I was born, so I never got to see him play ... but the press was there when I was born. No wonder I am in show business,” Trawick said, citing his father’s business savvy and his overall approach to life as an example of a “can-do” spirit.

When his parents split, Trawick moved to Ashland with his mother. It was after he landed in Kentucky that he first had any consideration of racism, Trawick said, explaining, “It’s not that Kentucky was racist. It was the ’60s, so race was on the news.” Even as a young black man in a predominantly white town, Trawick said Ashland’s people embraced him.

His father had strongly advised him against being a football player, suggesting he instead explore his options, which he did after a brief foray onto the football field during junior high school. In ninth grade, Trawick said, the Tomcats’ star player Jerry Whitlow made an unusual suggestion and pointed him toward the young coach Steve Gilmore in hopes of landing the team manager’s position for the coming basketball season.

“You have to understand Coach Gilmore was the kind of guy who wanted people to be the best. With that job, he kind of said, ‘Take it and run.’ Actually he didn’t say it ... he kind of said it but he really implied it and lived it himself,” Trawick said. “By the time I was a senior, I had a staff and we had our own travel equipment and luggage and sports jackets and the managers ran warm-ups with the team. I got six scholarship offers as a manager to go to college — full scholarships. And, that’s how I went to college.”

Before his modifications, Trawick said Tomcat team managers wore “church shoes with a jacket and a tie,” but Gilmore allowed him to have maroon and white “jumpsuits” made just for the managers, and gave the associates more duties which had traditionally been a coach’s tasks.

“Plus, coach was the Pat Riley of Ashland before there was Pat Riley. Smart, balanced with everybody, good looking, smooth, gorgeous and very cool wife, a winner in every fiber of his being, respected, tough but fair, high expectations, high demand, ladies dug him, guys wanted to be him, easy laugh, even liked music. So to be his right-hand dude as a high schooler for three years was special rare air to me. It was about being tough, smart and classy, whether winning or losing.  Putting it all on the line, team and unwavering, unflinching loyalty. My man,” he said.

“Coach Gilmore saw what he perceived as talent and encouraged it. We were very close. He gave me a lot of responsibility,” Trawick said, later noting they seemed to part company after the awards banquet during his senior year, when Gilmore presented him with an award he created just for the star team manager. “We hugged and kissed and all that ... and then he sent me on my way!”

Trawick continued to work as a team manager at Eastern Kentucky University, where he got into broadcasting, and he ultimately faced a decision about which way to turn for his career.

“I had to decide between doing news in Lexington or moving to my sister’s in L.A. I decided to hang a bunch of tobacco and save my money and I headed west. I think I still have some of that tobacco money,” he said, before explaining his late sister, Toni, also motivated him to do well in life.

“She was my Ghandi,” he said. “When someone makes you believe you are Superman, you try to fly for them."

A musician himself, Trawick said most of his career in entertainment could be classified with the jobs executive producer or talent manager. He explains those titles require a person who can be relied upon to produce results across every aspect of the project, from creative concerns to legal negotiations and settling talent disputes, “to arguing with stylists about clothing.” When he looks back on some of the people he has been fortunate enough to work with, Trawick said there is no doubt he has been fortunate.

“God, I’ve been so lucky. Let me see — Stevie Wonder, Justin Timberlake, Brian McKnight was my biggest client for a long time, Beyonce with Destiny’s Child used to be our opening act. Kobe Bryant rapped with us early in his career — he was a terrible rapper. Whitney Houston, Quincy Jones, Dr. Dre, Robin Thicke, Jill Scott ... Brian (McKnight) produced the Backstreet Boys,” he said, later adding “longtime friend Randy Jackson. We worked with Mariah Carey,  was influenced and spent time with Dick Clark, spent three incredible years with Mick Fleetwood, during the Broadway run, spent time with Mikhail Baryshnikov, spent time with Quincy Jones, Earth, Wind and Fire.  A host of famous producers and executives like Clive Davis, Berry Gordy, LA. Reid and I started at the same company at the same time and still talk every time we see each other. He was the drummer out of a band in Cincinnati, but always clearly on his way to greatness. My first label deal where we signed Robin Thicke was with Jimmy Lovine. Formidable guys all, and all a pleasure for me to do business with, to respect and be respected by. The Hollywood business men by far were the showbiz figures that I admired and impacted me. David Geffen’s way had major impact.

”In my current Internet show gig, I get to work near today’s talent.  So we have engineers who worked on Gotye and Tiesto and Prince and Rihanna and Adele and Coldplay and Taylor Swift and Rascal Flatts and Kendrick Lamar and Usher and you name it. Every week. It’s pretty cool,” he said before stopping and joking that about himself, saying “It looks like I am just plucking every name out of the air. I think it just means I am getting old and have been extraordinarily blessed.”

Trawick also worked with the band Earth, Wind and Fire to produce a Broadway show “Hot Seat,” which did not succeed, although he did form a partnership with Maurice White, often credited as the band’s musical inspiration and leader.

“He invited me up to his house and as many times as I’ve done this and as many people as I’ve met, I was completely nervous,” he said, explaining “my impulse was to run out and call everybody I went to high school with in Ashland and in college at Richmond. I had to sit in my car after and just pull it together,” he said, explaining White played his kalimba for him during that initial meeting, “and it was like watching Mozart play.”

Thinking back upon his career, Trawick credited local experiences for much of his success.

“When I think about music and its effect on me, its roots all were based in Ashland,” he said. “I listened to all kinds of different music because I lived in Kentucky, I played many a piano recital in the gas company’s auditorium as a chubby little black dude with all these freshly scrubbed little girls. I sang at New Hope Baptist forever and was an all-state singer with the Blazer choir. It even went as far as I used to make my boys rehearse choreography so we could kick off parties we threw with routines like we were artists.”

Trawick said he last visited Ashland for his mother’s funeral, although he has stayed in touch with a half-dozen “Blazer people” and plans to attend his class reunion in October. “It’s just been too long,” he said.

Stephen Wymer, 51, husband of Jill Burcham-Wymer, passed away March 31,2020, at home. He was born in Ironton, Ohio on December 29, 1968, to parents Ronald and Sherry May Wymer. Stephen was a 1987 graduate of Raceland High School and a 1993 graduate of Morehead State University, where he atta…