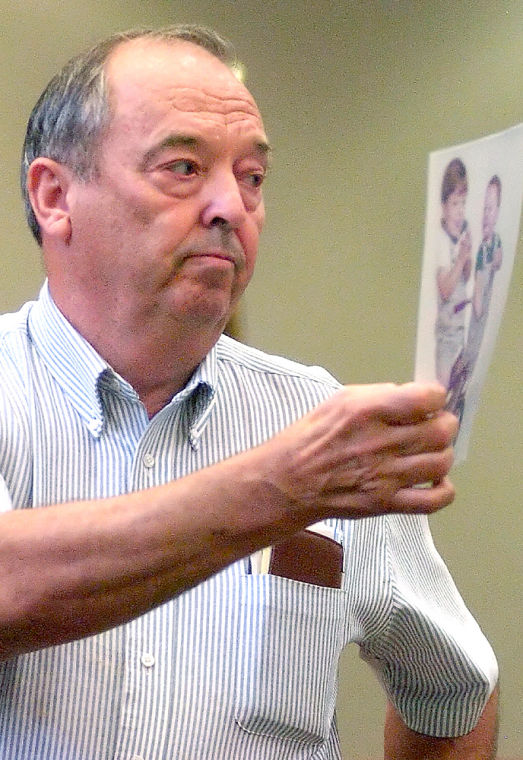 James Flaugher shows a picture of his great-grandchildren to Cathy and Clyde Reddick Thursday during their sentencing in Carter Circuit Court. The Reddicks were sentenced in the July 2004 killing of Jeff Flaugher, James Flaugher's grandson, and Teresa Leadingham. 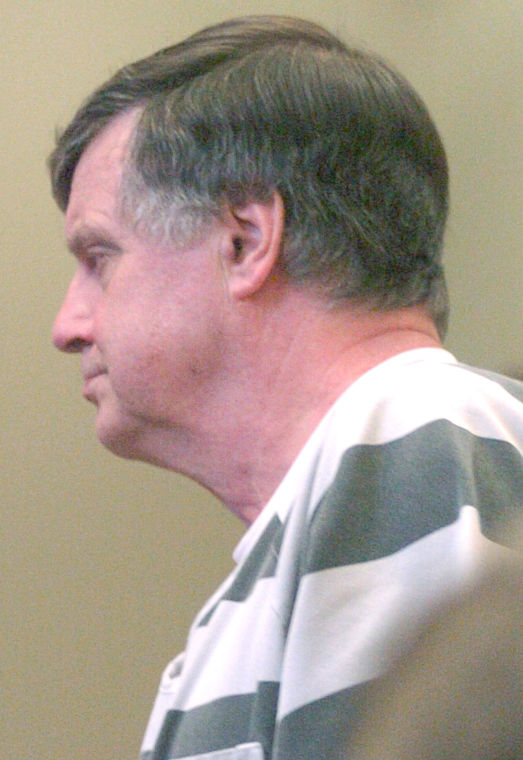 Clyde Reddick during her sentencing Thursday in Carter Circuit Court for her part in the killing of Jeff Flaugher and Teresa Leadingham. 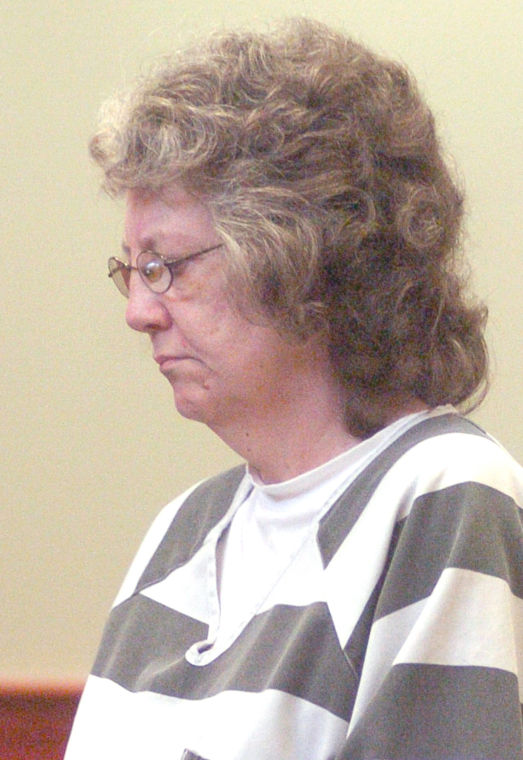 Cathy Reddick during her sentencing Thursday in Carter Circuit Court for her part in the killing of Jeff Flaugher and Teresa Leadingham.

James Flaugher shows a picture of his great-grandchildren to Cathy and Clyde Reddick Thursday during their sentencing in Carter Circuit Court. The Reddicks were sentenced in the July 2004 killing of Jeff Flaugher, James Flaugher's grandson, and Teresa Leadingham.

Clyde Reddick during her sentencing Thursday in Carter Circuit Court for her part in the killing of Jeff Flaugher and Teresa Leadingham.

Cathy Reddick during her sentencing Thursday in Carter Circuit Court for her part in the killing of Jeff Flaugher and Teresa Leadingham.

A Carter County man was sentenced to 35 years in prison Thursday for killing his neighbors with a 20-gauge shotgun. His wife was sentenced to a year of home confinement for her role in the July 16, 2004 slayings. The sentences handed down to Clyde and Cathy Reddicks were in accordance with plea agreements reached last month between attorneys for the commonwealth and for the Reddickses. Neither of the Reddickses spoke at Thursday’s hearing or showed any emotion when their sentences were pronounced by Special Judge Stephen P. Ryan. Clyde Reddicks, 62, pleaded guilty, but mentally ill, to two counts of first-degree manslaughter in the death of Jeffrey “Bub” Flaugher, 26, and his girlfriend, Teresa Leadingham, 29. In so doing, he admitted he killed the coupe, but maintained that he did so while under extreme disturbance. Clyde Reddicks had been charged with two capital murder, for which he could have gotten the death penalty. Clyde Reddicks also pleaded guilty, but mentally ill, to two counts of first-degree wanton endangerment, one count of second-degree burglary and three counts of first-degree wanton endangerment. Under the terms of the plea bargain, Ryan sentenced Clyde Reddicks to 18 years for each of the manslaughter counts, with the terms to run concurrently; 10 years for the burglary charge and seven years for the wanton endangerment counts. The burglary and wanton endangerment sentences will run consecutively with the manslaughter term, for a total of 35 years. Ryan rejected Clyde Reddicks’ bid for probation, saying it would depreciate the seriousness of his crimes. “You took the lives of two people,” the judge told Clyde Reddicks. “In your mind, maybe it was justified. But it’s not in mine.” Clyde Reddicks’ guilty plea last month came on the fourth day of his trial, which was moved from Carter County to Winchester due to pre-trial publicity. During the trial, Clyde Reddicks’ attorney, Bill Johnson of Frankfort, claimed his client shot Flaugher and Leadingham after he and his wife were subjected to a constant barrage of crude sexual remarks, threats and other forms of harassment by the victims. The Reddickses and Flaugher and Leadingham lived about 100 feet apart from one another on Satellite Road, off U.S. 60 west of Grayson. Johnson also maintained that Clyde Reddicks, a decorated Vietnam veteran, suffered from post-traumatic stress disorder as a result of his combat experiences and that the victims’ actions — which included shooting off fireworks at all hours of the night and aiming them so that the spent casings would land on the Reddickses’ property — aggravated his already fragile mental condition and triggered flashbacks of the war. At Thursday’s sentencing hearing, Johnson said the main reason he filed a motion for probation for Clyde Reddicks was so that a doctor’s report stating that Reddicks suffers from post-traumatic stress disorder could be incorporated into the case record. “It occurs to me that a person who volunteers for military service, who lays his life on the line, almost always ought to be looked upon with respect, even when he does something tragic as a result of that service,” he said. In response, Commonwealth’s Attorney David Flatt said he found it “almost insulting” that Clyde Reddicks would attempt to use his military experiences as a defense for his actions. Jim Flaugher, the grandfather of one of the victims, echoed that sentiment when he addressed the court Thursday on behalf of his family. “To me, he (Clyde Reddicks) brings shame on the military,” he said. Jim Flaugher, a former Carter County Board of Education member, held a up a series of photographs of his grandson, his girlfriend and their children. As a result of Clyde Reddicks’ actions, the children “don’t have a mother and they don’t have a daddy,” he said. Jeffrey Flaugher and Leadingham had eight children between them, two together. Jeffrey Flaugher was holding his youngest son in his arms moments before Clyde Reddicks shot him through a bedroom door with a 20-gauge shotgun. Clyde Reddicks then made his way into the living room of the couple’s trailer and gunned down Leadingham. Both victims reportedly pleaded for their lives before being shot. There is some question about when Clyde Reddicks will be eligible for parole. His attorneys have maintained that will be eligible for a parole hearing after he has served 85 percent of his manslaughter sentences, meaning he could possibly get out of prison when he is 75. Cathy Reddicks, 53, was to have stood trial with her husband on charges of complicity to capital murder and first-degree burglary and criminal mischief. However, she agreed to plead guilty to a reduced charge of hindering apprehension or prosecution in exchange for a five-year sentence. As part of the deal, Flatt agreed to not oppose an alternative sentencing arrangement — such as home confinement — for Cathy Reddicks. Cathy Reddicks agreed to accept the year of home incarceration even after Ryan told her she might be better off taking the five years. The latter sentenced, the judge told Cathy Reddicks, would make her immediately eligible for a parole hearing because of the more than two years she has already spent in custody. “Are you sure this is what you want to do?” Ryan asked. “Yes it is, your honor,” replied Cathy Reddicks’ attorney, Robert Miller of Grayson. Miller said after court that he couldn’t say why his client had opted for the term of home confinement “without divulging personal information.” After her year of home incarceration is up, Cathy Reddicks will be on probation for two years, Ryan said.