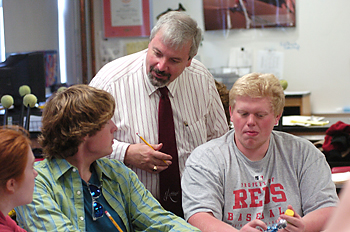 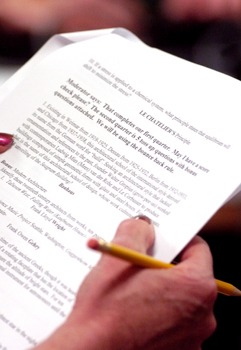 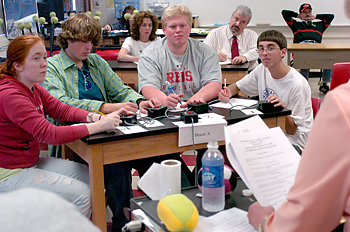 Matt Knupp walks to the center of a crowded room, holding official-looking sheets of paper. “If you’re a coach, I have a bracket,” he says, as all start shuffling forward. “Playoffs start at 1:15.” You’d think this was behind the scenes at Rupp Arena — staff and referees asking where they need to be, teammates smoothing down their shirts, huddles for impromptu strategy sessions. Instead, it’s a good ol’ “quiz bowl,” or more accurately, the Russell Academic Tournament. “Kentucky calls it quick recall; everybody on Earth calls it quiz bowl,” said Knupp, academic team coach at Russell High School, and tourney organizer. Russell used to have a regular independent academic tournament, inviting in teams from all over, so Saturday’s matchups marked a revival, he said. “This is like regular season play,” Knupp said. With an academic “league,” teams play one on one, but when they started into the district, regional and state “Governor’s Cup” tournaments it’s many versus many during a one-day meet. “The students love it,” Knupp said. “And the parents and community have been very supportive.” Nearly a dozen sponsors helped put on the event, conducted all day at Russell High, for which Knupp expressed much appreciation. “After all, this is a fund-raiser (for Russell’s team) as well as helping teams gain experience,” he said. As hosts, Russell’s team did not play, but helped run the quiz bowl matches — 14 as afternoon play resumed. Overall, 30 academic teams came representing some 18 schools from Pikeville, Paintsville, Ripley, Fleming County and even farther away. Independent tournaments aren’t uncommon. In fact, Russell traveled to Tennessee for one last weekend. Paul G. Blazer High School in Ashland travels to “a couple or three a year,” said academic coach Dan Boyer, just before the school’s A team played Spring Valley. “They’re not close,” he said, so having one just next door again is exciting. “We get to see some good competition, and hopefully come out on top.” Blazer’s team started off well, in fact, scoring the first 50 points of its first playoff game. To earn them, teammates beat the other team to the buzzer and matched a 19th century literary movement with the term “transcendentalism,” derived determinants from sets of mathematical matrices, named artists and points of psychology. Even music made a showing, as Kevin England quickly answered the moderator’s quizzical start, “What composer named the ‘march king’ ...” That’s Sousa. John Philip Sousa, to be exact. ALLEN BLAIR can be reached at ablair@dailyindependent.com or (606) 326-2657.