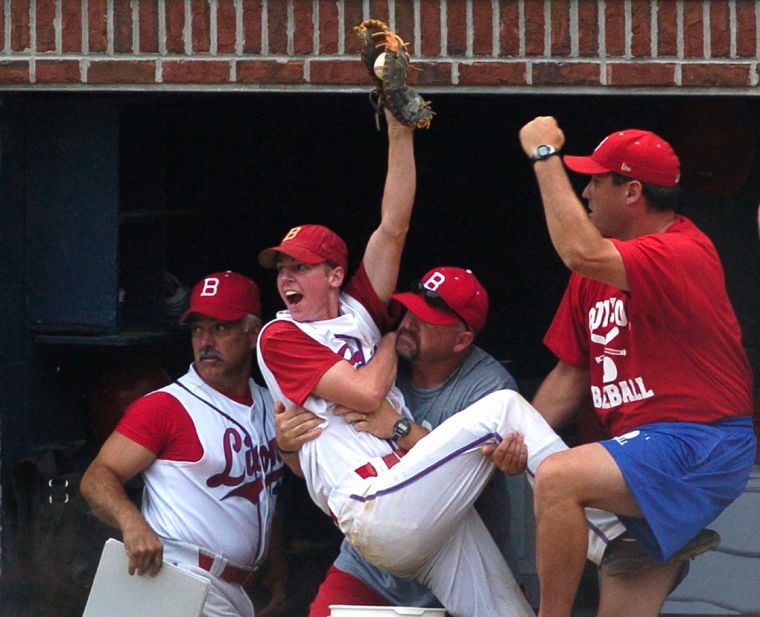 Boyd County first baseman Jon Rakes looks to umpire Tim Sammons for the call Wednesday night after sliding into the dugout to make a catch on a pop fly. The Lions defeated Raceland 6-5 in eight innings in the 16th Region championship game in Morehead. 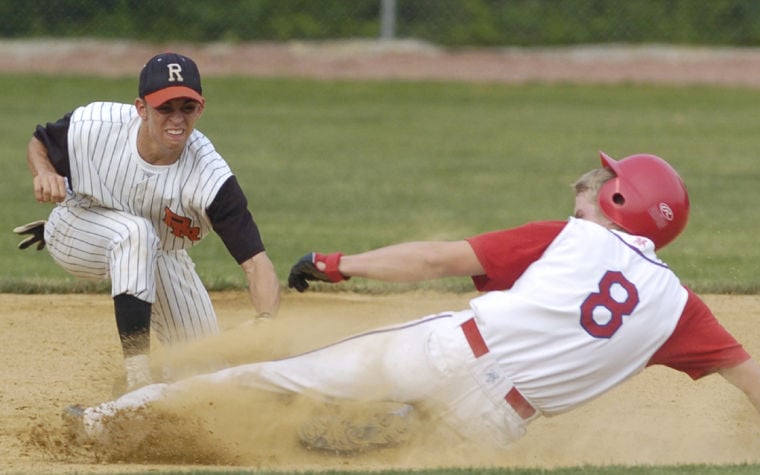 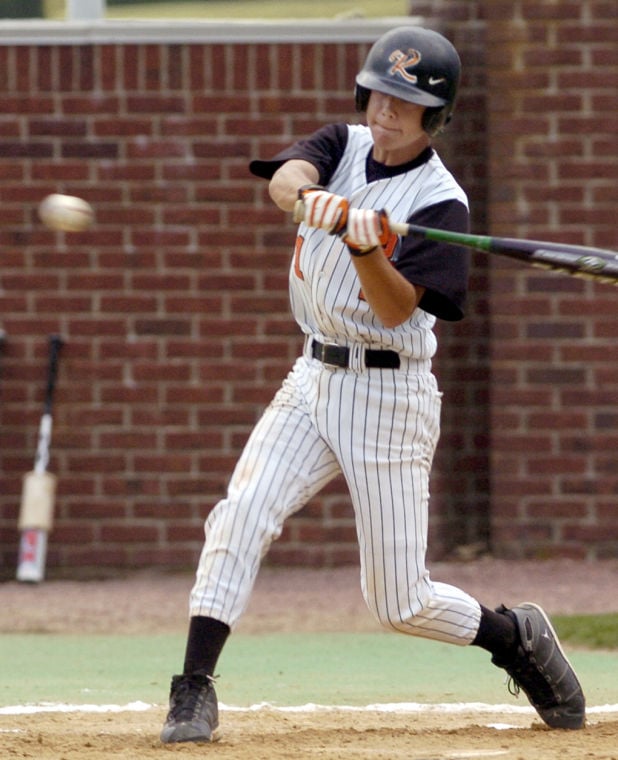 Raceland's Peyton Martin connects on a double that scored Blake Morris from second base in the second inning Wednesday.

Boyd County first baseman Jon Rakes looks to umpire Tim Sammons for the call Wednesday night after sliding into the dugout to make a catch on a pop fly. The Lions defeated Raceland 6-5 in eight innings in the 16th Region championship game in Morehead.

Raceland's Peyton Martin connects on a double that scored Blake Morris from second base in the second inning Wednesday.

One baseball fan filing out of Morehead State’s Allen Field could be plainly overheard: “They will be talking about this game for 20 years.’’ Indeed. Boyd County kept stealing pages out of Raceland’s comeback book in a spine-tingling and rain-interrupted marathon Wednesday night. Held scoreless through four innings while having four runners cut down on the bases, the 13th-ranked Lions rallied from two- and one-run deficits in regulation play. Finally, Brad Blanton singled through a drawn-in infield with the bases loaded and no outs in the eighth inning to give Boyd County a 6-5 victory. “This was about as exciting a game as I’ve ever seen,’’ said Lions coach Ben Maynard. “Both teams made great plays, had big hits and deserved to win. We just happened to get one more hit when we needed it.’’ Tournament MVP Kyle Potter collected four hits and scored the winning run after escaping to third base on a rundown play. “I remember going into third base and seeing the ball on the ground,’’ Potter said. “It’s the first time I slid head first in over a year after separating my shoulder doing that last spring.’’ Boyd County (25-9) scored four times with two outs in the fifth inning to snatch a 4-2 lead. The Lions’ first three runs came before heavy showers fell and forced a delay of 1 hour, 20 minutes. When play resumed, Matt Phillips took over on the mound for Raceland. Boyd County’s Tyler Gatrell scored on a wild pitch to make it 4-2. Raceland bounced back with three runs in the sixth, however, aided by Kory Darby’s double and singles from Phillips and John Scott Carver. Blake Morris scored on Carver’s infield hit to put the Rams up 5-4. Boyd County tied it in the sixth as Gatrell walked with the bases loaded. Gatrell also picked up the victory in relief of starter Greg Bowling. Boyd County will host the 15th Region winner next week in sectional play. Raceland (25-10) picked up a run in the second inning as Peyton Martin doubled home Morris, who reached on a fielder’s choice and stole second. In an oddity, the Rams collected five consecutive hits to lead off the fifth inning but came away with only one run. Martin singled and was hit by Shawn Deskins’ grounder for the first out. After Carver singled, Scott Grizzle doubled home Deskins while Carver was thrown out also trying to score on the play. Thomas Tolliver singled to put runners on the corners before Bowling escaped further trouble with a fly out. “We felt like we were in control when it was 2-0, then some things happened,’’ said Raceland coach Randy Vanderhoof. “Boyd County took the lead, then we battled back. Congratulations to coach Maynard and his guys. They are going to represent us well.’’ RACELAND 010 013 00 — 5 11 3 BOYD CO. 000 041 01 — 6 13 1 Reynolds, Phillips (5), Morgan (7) and Darby; Bowling, Gatrell (6) and Blanton. W_Gatrell. L_Morgan. 2B_Martin 2 (Race.), Grizzle (Race.), Darby (Race.). ALL-TOURNAMENT TEAM MVP-Kyle Potter (BC), Brad Blanton (BC), Greg Bowling (BC), Casey Branham (BC), Brennan Sargent (BC), Scott Grizzle (Raceland), Blake Morris (Raceland), Thomas Tolliver (Raceland), Brandon Williams (Ashland), Marcus Frazier (Russell), Justin Potter (Russell), Chase Price (Rowan Co.).

Bruce Adam Edwards 64, of Ashland passed away January 13,2020, at his residence. Bruce was born June 20,1955 Memorial services will be conducted at later date. Services have been entrusted to Caniff Funeral Home in Westwood.

Wayne Broughton 71, died January 16, at Chillicothe,Va. Medical Center. Graveside services will be 2p.m. Sunday, January 19, at Dixon Cemetery in Westwood. Caniff Funeral Home is in charge of arrangements. Condolences may be left at canifffuneralhome.com

Funeral services will be 1 p.m., Jan 20, 2020, at the Advanced Memorial United Methodist Church. Visitation will be after 11 a.m., Monday at the Church.