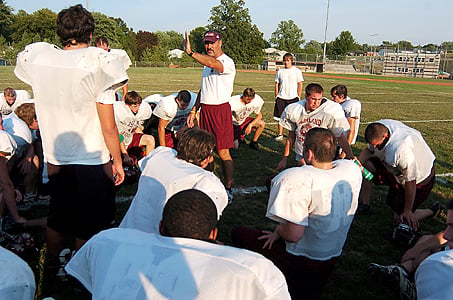 Ashland football coach Leon Hart talks to his team Monday afternoon during a break in thier first practice of the year. 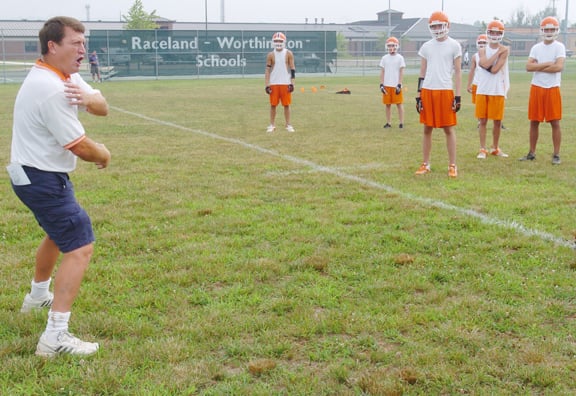 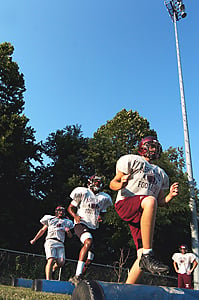 The Ashland Tomcats started their first day of practice with agility drills at the practice field. 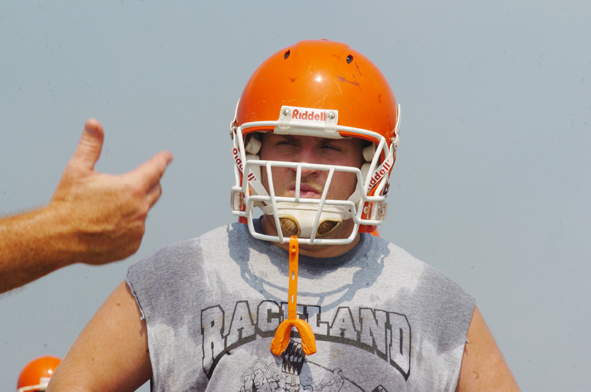 Ashland football coach Leon Hart talks to his team Monday afternoon during a break in thier first practice of the year.

The Ashland Tomcats started their first day of practice with agility drills at the practice field.

High school football practice is officially under way in Kentucky. Across the area, players worked out in shorts, T-shirts, helmets and other gear Monday as preparation began in earnest for the Aug. 24 start to a new season. At Raceland, assistant coach Mark Lewis welcomed his first full preseason camp with the Rams. Lewis, a 33-year assistant across the river at powerhouse Ironton, came to Raceland just prior to the 2006 season and helped the team to a school record-tying 11 wins. Raceland won two playoff games to reach the Class A quarterfinals. Raceland head coach Randy Vanderhoof said Lewis has quickly become a valuable member of the coaching staff. “It’s phenomenal the way Mark ran the scout team last year,’’ Vanderhoof said. “He fit right in with the other coaches from day one. The rest of our guys have so much respect for him.’’ A longtime fixture on Ironton’s sideline, Lewis left when head coach Bob Lutz stepped down after the ‘05 season. Lutz is back to guide one of Ohio’s winningest programs and has reassembled most of his old staff, but Lewis opted to remain at Raceland. “I’m glad he stayed,’’ Vanderhoof said. “Mark could have been back there working this season.’’ Admittedly, Lewis has become attached to Raceland. “I like it here,’’ he said. “It’s a smaller version of Ironton. The fans get into football and want to win, and they have tradition. They haven’t won as many, but it’s there.’’ Raceland is coming off its 16th district championship since 1975. This season, Lewis will coach Raceland’s linebackers and help out with the offensive line as well as working with the scout team defense. Vanderhoof said Lewis brought several highly desirable qualities from his long stint at Ironton. “A lot of coaches have experience, but not many have winning experience like Mark does,’’ Vanderhoof said. “He has the highest character level and brings another kind of toughness, not only to our staff but to our kids. With Ironton, a lot of times they are just tougher than their opponents.’’ When Lewis made the move, he was impressed with the caliber of player at Raceland. “I didn’t know what to expect,’’ Lewis said. “There’s always been that mystique about Ironton, but I found some some kids here that could play over there.’’ The fact that the schools share the same colors — orange and black — made his transition all the easier. “Mark took some of his Ironton stuff and put Raceland logos over the top of it,’’ Vanderhoof said. “Hopefully, the winning thing they do will go right over the top, too.’’ Vanderhoof and the Rams would settle for plenty of seasons like last year. Raceland graduated several top players but hopes are high for another winning season. “I guess you could say there are expectations to live up to,’’ said senior Stephen Piercy. “People expect us to come out and show pride in the school and football program. We have a lot of tradition.’’ Piercy, a fourth-year player, is a candidate for playing time at running back and linebacker. “There will be a lot of competition in camp the next couple of weeks,’’ he said. “The weather worked out good for us today. There’s some stuff we needed to work on and we had a chance to do it.’’ ROCKY STANLEY can be reached at rstanley@dailyindependent.com or (606) 326-2671.

Rosalie M. Johnson, 78, of Ashland, died Sunday, October 24, 2021 at the Community Hospice Care Center. She was born December 17, 1942 in Tomahawk, KY the daughter of the late Earl and Helen Smith Mills. She was retired from Sears Department Store in 2003. She was a lifetime member of the Or…