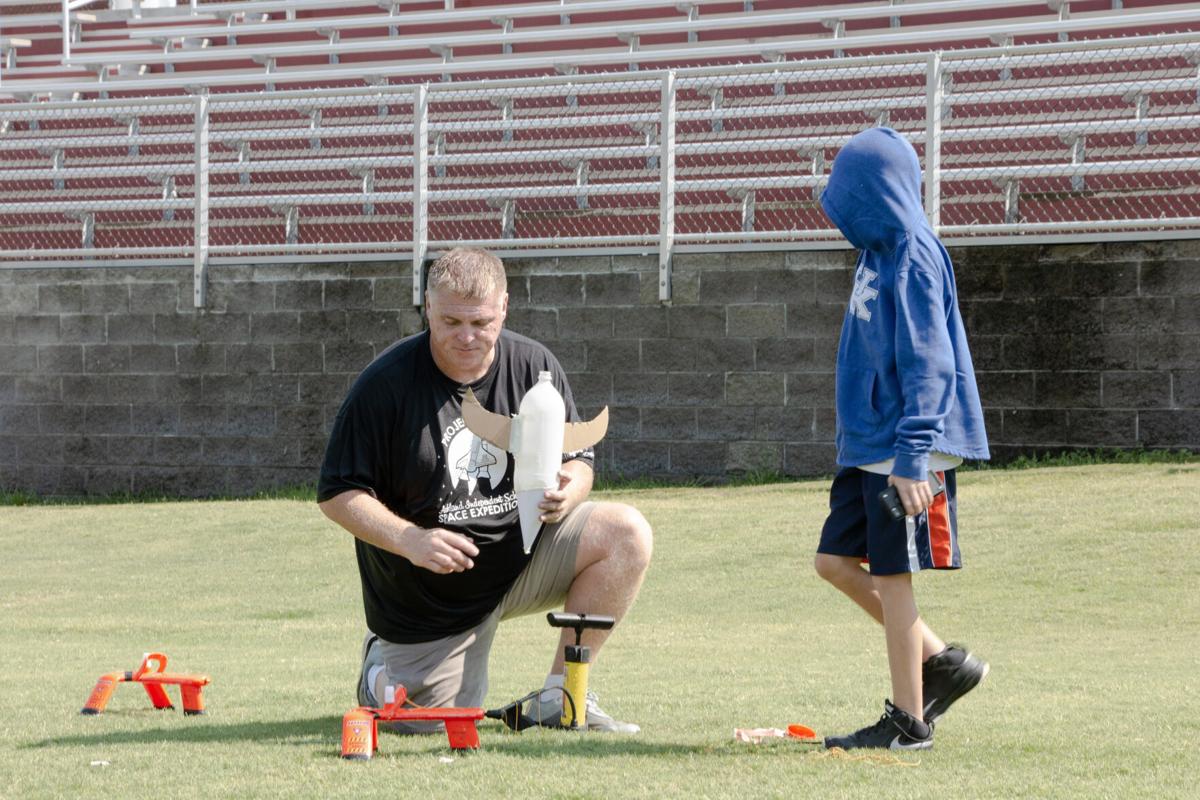 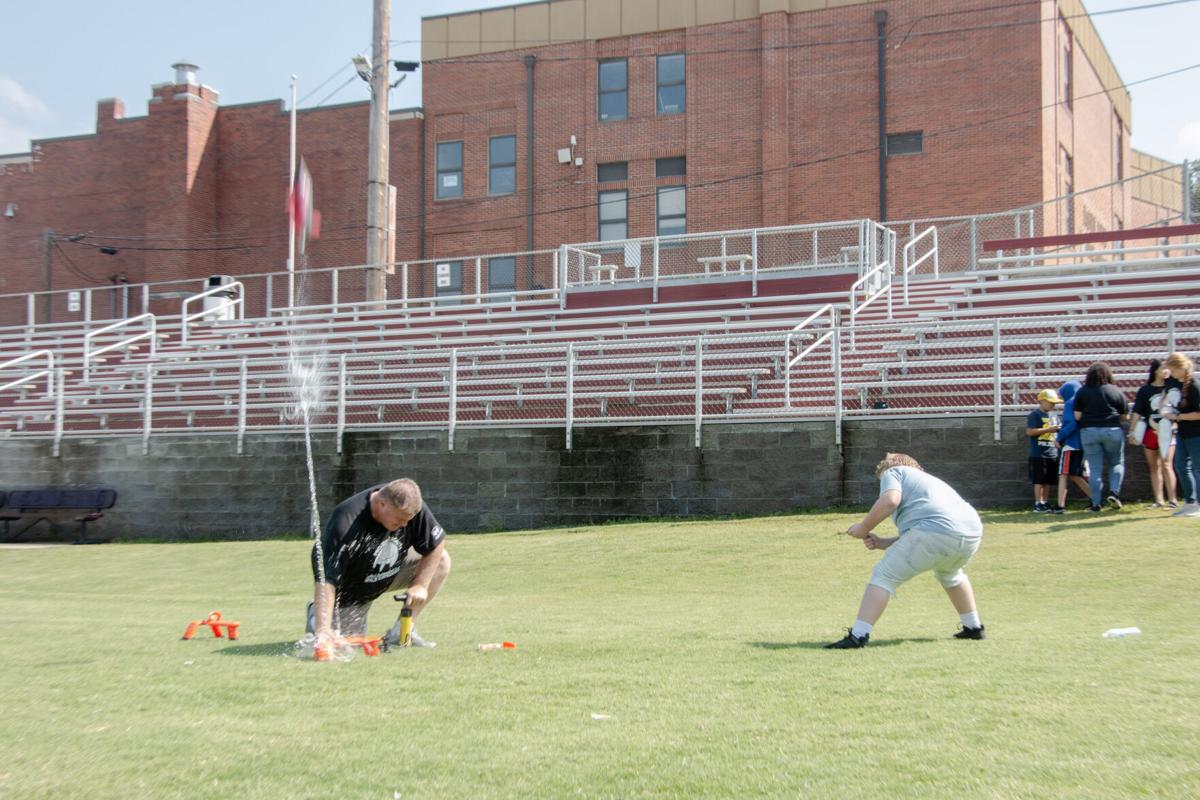 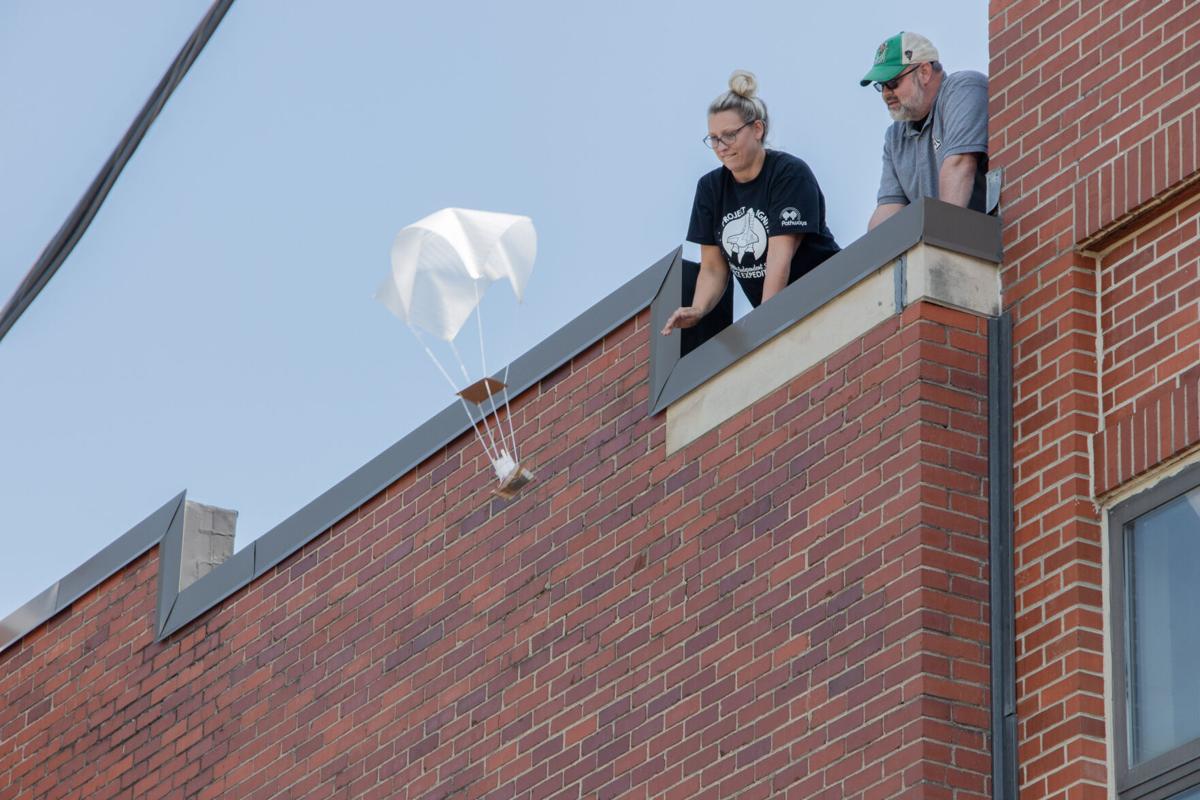 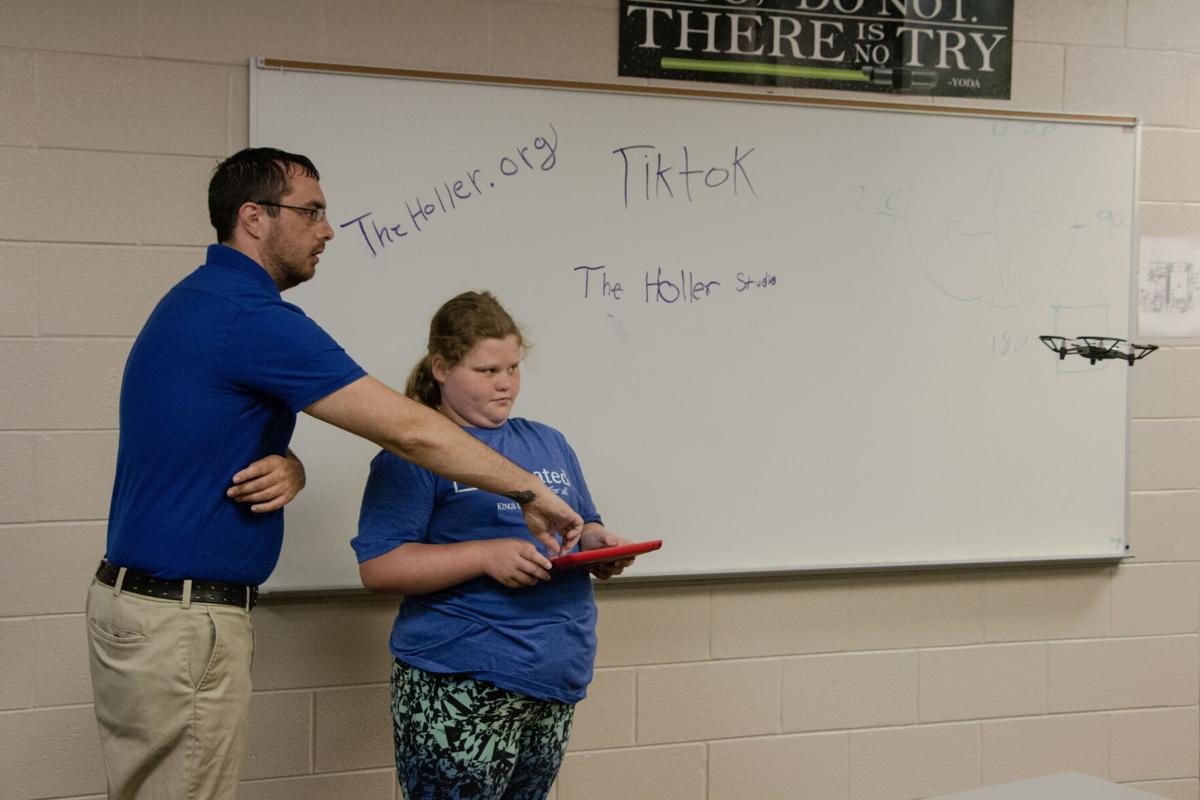 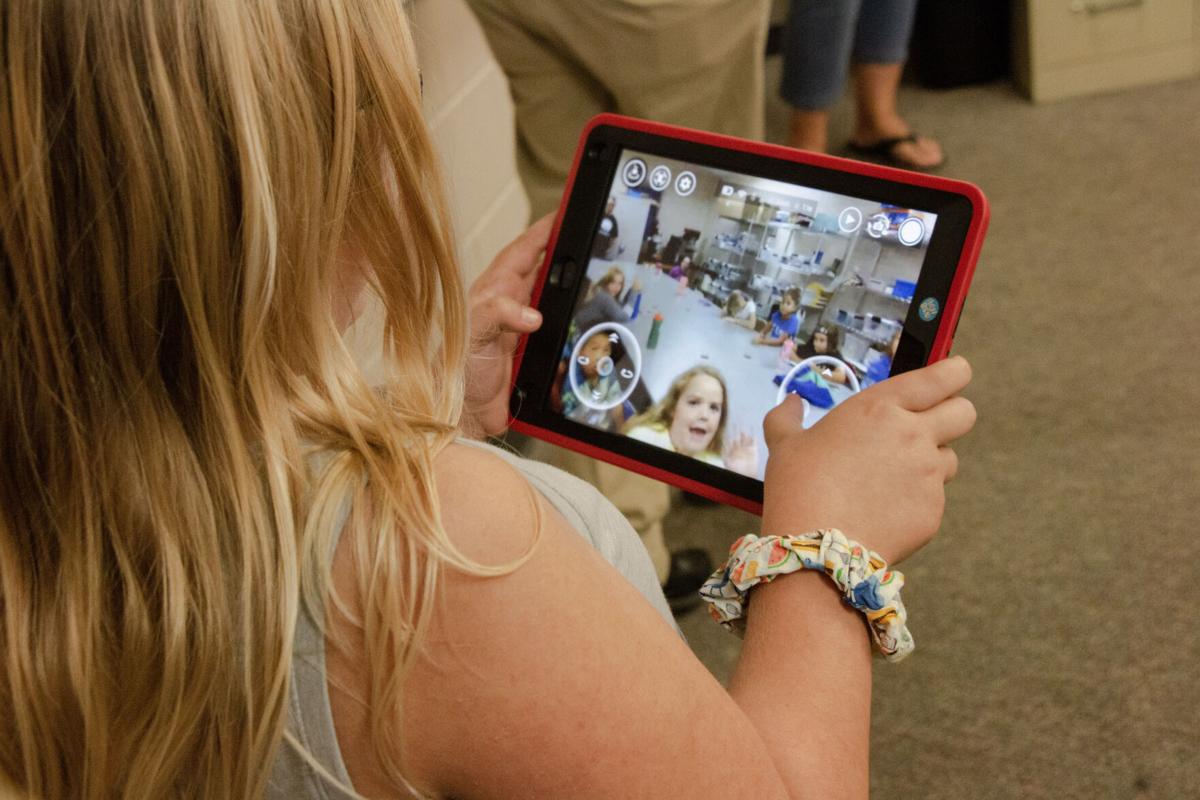 A drone flies over a class at Ashland Middle School Project IGNITE and takes photos of the students. Emily Porter | The Daily Independent 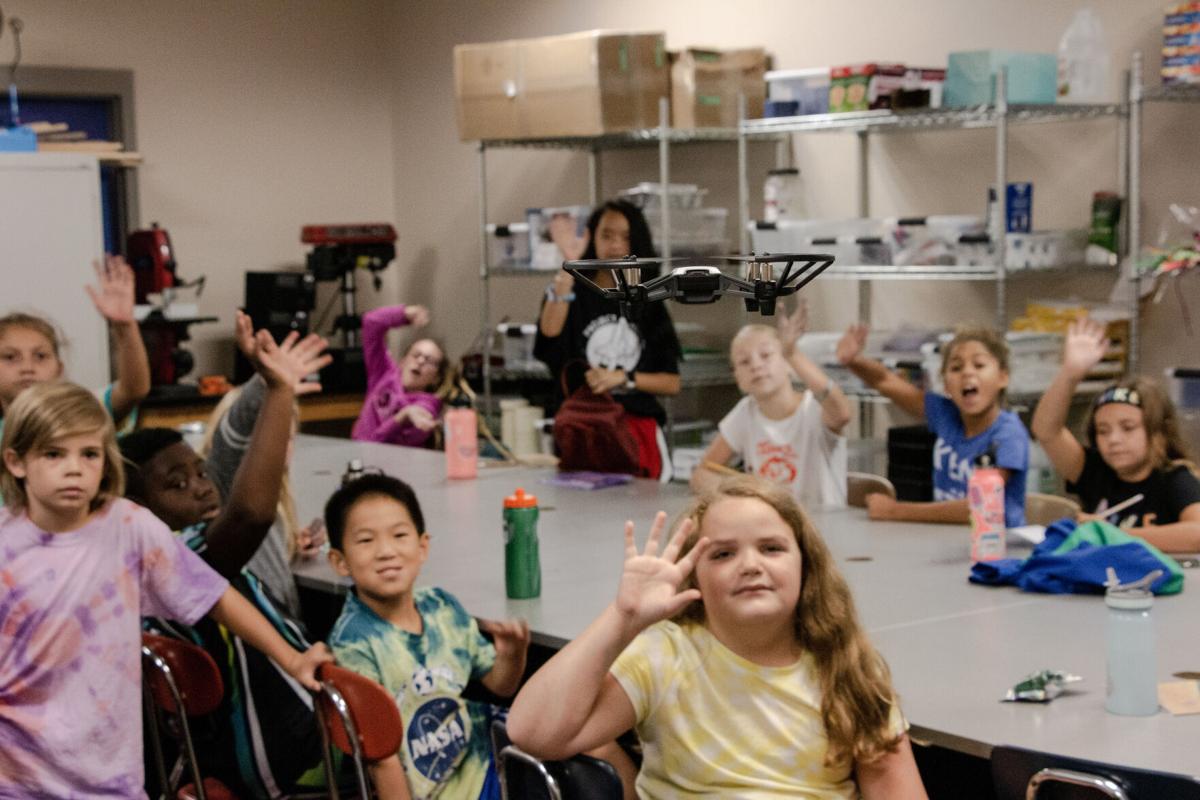 Students wave as a drone flies over head and takes a photo. Emily Porter | The Daily Independent 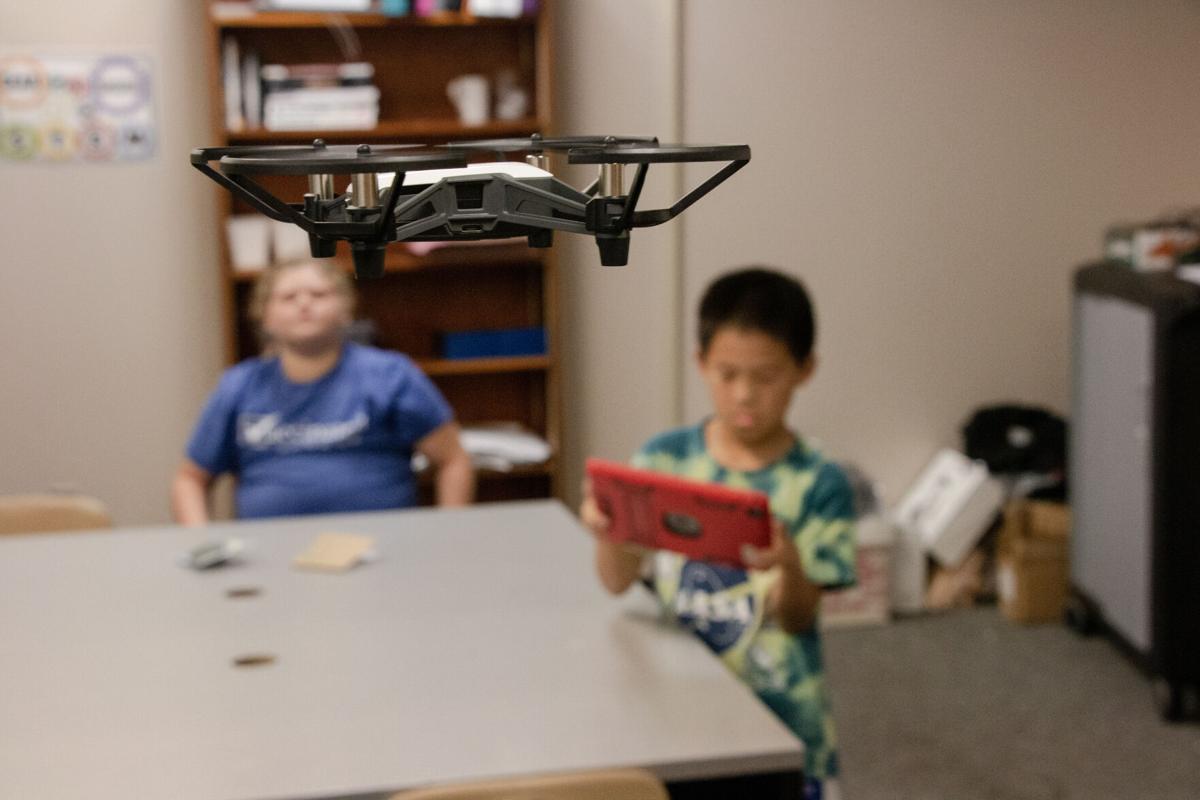 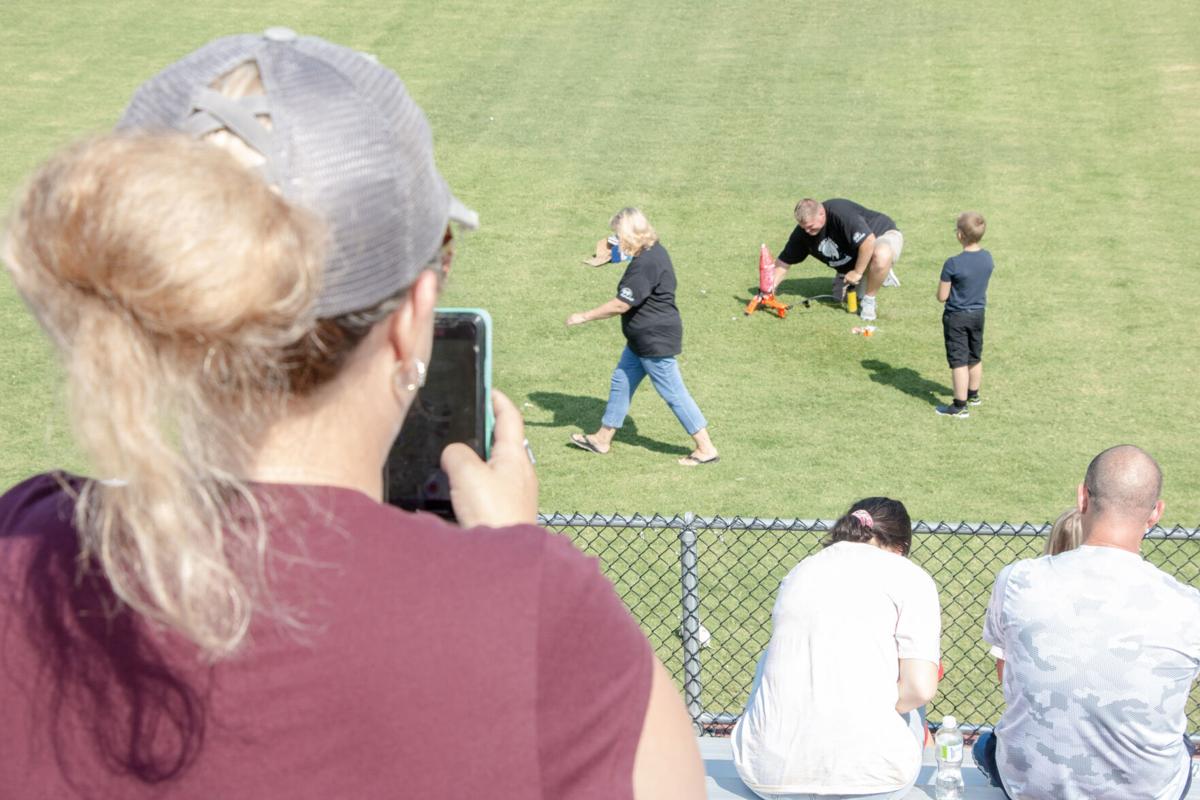 A drone flies over a class at Ashland Middle School Project IGNITE and takes photos of the students. Emily Porter | The Daily Independent

Students wave as a drone flies over head and takes a photo. Emily Porter | The Daily Independent

Over the last week, students have built bottle rockets, solved problems with 3D printing and learned about the life of an astronaut.

The space-themed camp concludes today with a trip to COSI.

The field trip is “a celebration of all their hard work as well as an extended learning activity beyond the classroom,” said Cary Williams, camp coordinator. “They can see how it all fits together in real life.”

The students will get to see a large-scale version of what they’ve been creating and learning about all week. They will get a glimpse into possible career options they may be interested in for their future.

“I think that’s exciting just to see how this applies to future careers and opportunities that are available to our students,” Williams said.

Some families take summer trips on their own to Columbus, some students aren’t able and won’t have that opportunity personally. This camp provides that for all students no matter their background or home situation.

“To get to go to Columbus, it’s a great opportunity for them to expand their horizons as well,” said Williams. “It gives kids a more even playing field when they return to school.”

Six teams of students, each named after one of the Mars rovers, made their way through stations that explored what is beyond planet earth.

Students worked to build their own space themed video games. Brittany Hess, a sixth-grade science teacher, said the students designed their characters, how they would move across the screen, the missiles they would use and how many lives they could have.

The coding skills can lead them to high-paying careers that are in need, Hess said.

High school students served as volunteers, and helped make 3D-printed joysticks for the students to use with their custom video games.

Junior Charlize Hill said she took the opportunity to help out because she wants to work with children in pediatrics. Her favorite part of growing up was having someone to look up to. She decided to be that person for the younger students at the camp.

Her hope is to help guide the students as much as possible, and said she is excited to watch them grow up through high school.

“They are sweet kids,” Hill said, adding that she would come back to visit them at the middle school.

Each student built a bottle rocket that they were able to launch Thursday in Putnam Stadium.

Wyatt Haney said he had to think on his feet when the larger wings he put on weren’t in the right spot. He had to add smaller wings to help power the rocket.

Haney’s parents, John and Kristen, said Wyatt had come home every day excited to share what he had learned during camp and was excited to return each day.

Parents were able to join in Putnam Stadium for the rocket launches.

Jessica Leighty said her son Taylor was having a blast. He asked for everything NASA for Christmas, so when her brother-in-law mentioned the camp, it was perfect.

Leighty said it is a great opportunity for her fifth-grader to get a taste of the middle school and it’s always fun when students get to step foot onto the football field.

Isaiah Cochren took inspiration from a shark when building his bottle rocket, but once it launched, he said the fins were much more like an eagle’s wing flying through the sky.

Bottle rockets weren’t the only things soaring through the sky Thursday. Students were paired up for egg drops.

Students were given fictitious money to purchase supplies from the teacher. The limitation pushed their imagination.

“They had to be strategic,” said Williams. “They couldn’t just wrap it in foam.”

Each egg was named after a teacher or administrator at the camp. One group of students had the egg named after Principal William Ferguson. The egg didn’t make it to the ground, but got stuck midflight when the parachute got stuck on the side of the building.

While building the egg drops, the students learned about how astronauts have to re-enter the earth’s atmosphere.

The students made astronaut ice cream, practices astronaut yoga and learned about what life is like on the International Space Station.

The camp was for fourth- through eighth-graders and gave the students a chance to get back with their friends and in a school environment.

For the students heading into middle school this year, Ferguson said it’s a great chance to get them oriented to the building and some of the teachers.

Williams said students are able to meet new friends before the first day of school next month.

Natalie Hayes said her first time flying a drone was a little hard, but it was fun and she’d definitely do it again. For Hayes, the artistic side of building the bottle rockets was the best part of camp. She loves to paint and she was able to make a masterpiece of her rocket.

Williams said three sponsors made the camp possible in addition to the teachers and administrators. Pathways purchased shirts for everyone, the middle school family resource center bought the supplies they needed and Al Barker of ACTC made sure any kid who couldn’t pay the registration fee was covered.

The camp cost $50, but Barker sponsored anyone who couldn’t swing it, so no kid was left out, Williams said.

“We don’t turn anyone down,” she said. “We are greatly appreciative of their support.”