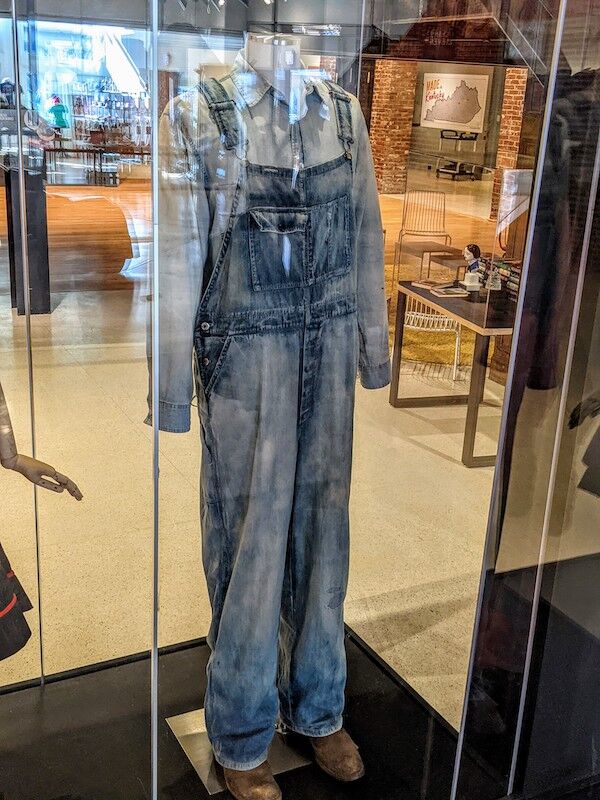 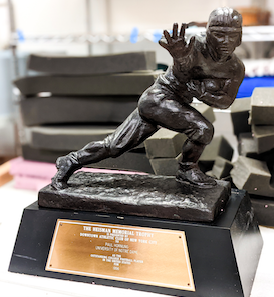 LOUISVILLE A show at Frazier History Museum is full of evidence that Kentucky is cool.

“From Mammoth Cave to Muhammad Ali, Kentucky is home to some of the coolest people, places, and things on earth,” Frazier Museum President and CEO Andy Treinen said. “In this exhibit, (titled "Cool Kentucky"), we’re putting a spotlight on both the hidden histories and famous figures of the Commonwealth: folks like Willa Brown Chappell, the first African-American woman to obtain a pilot’s license in the U.S.; and the Hill sisters, who wrote and composed 'Happy Birthday to You.'”

One notable object in "Cool Kentucky" is a re-issue of the 1956 Heisman Trophy awarded to Notre Dame quarterback Paul Hornung, a Louisville native and Flaget High School alum who died Nov. 13. Museum visitors are invited to strike the world-famous “Heisman pose” beside the trophy and post a photo to social media with the hashtag #HeismanAtFrazier. The trophy is on loan to the Frazier from the Green Bay Packers, the team that selected Hornung first in the 1957 NFL Draft. During Hornung’s nine seasons with the Packers, the team would win four NFL championships, including Super Bowl I.

"Cool Kentucky" is designed to bring the state to life in all of its many facets. It inspires thought, provides insight, and brings understanding about who we are, how we came to be, and where we can go. Those who experience it will be motivated to see Kentucky for themselves — taking in the state’s many attractions, sights, sounds, and tastes, from north to south and east to west.

The centerpiece of the exhibit is KentuckyShow!, a high-definition multimedia experience narrated by Kentucky’s own Ashley Judd.

Visitors will encounter a range of artifacts representative of Kentucky.

On display is American Pearl, the motor-less and sail-less boat with which Louisville’s Tori Murden McClure became the first woman and first American to row solo across the Atlantic Ocean in 1999, as well as skis and apparel from her 1989 trek to the geographic South Pole; a four-poster Boyd Bedstead designed by Henry Boyd, an African American woodworker who was born into slavery on a plantation in Kentucky in 1802 and later obtained his freedom; a 2015 Chevrolet Corvette Z06 on loan from the National Corvette Museum in Bowling Green; Kentucky Colonels uniforms and shoes Dan Issel, Artis Gilmore, and Louie Dampier wore; and a tree stump in which pioneer Daniel Boone carved his name.

Each section of the exhibit is organized around a particular theme. Some of the notable objects visitors will be able to find in specific sections include:

• A U of L football practice jersey worn by quarterback Lamar Jackson, an oar used by Paralympic rower Oksana Masters, and a horseshoe worn by Secretariat (“Competitive Kentucky”)

• A section of the Belle of Louisville’s paddlewheel, a dress Madame Glover designed, and a Givenchy gown 1933’s “Best-Dressed Woman in the World” Mona Bismarck wore (“Historic Kentucky”)

• Fishing reels, Doll Baby dolls, and reproductions of patents issued to Abraham Lincoln for a method of buoying vessels (1849), John Thompson for the Tommy Gun (1922), and Garrett Morgan for the smoke hood (1914) and the three-position traffic signal (1923) (“Inventive Kentucky”)

• An ad for Glier’s Goetta, a matchbook from Kaelin’s Restaurant, “Birthplace of the Cheeseburger;” and a case with Ale-8, Big Red, Derby pie, Modjeskas, and Moonlite burgoo (“Tasty Kentucky”)

The Frazier Museum, at 829 W. Main St. in Louisville, is open from 10 a.m. to 5 p.m. Thursdays through Saturdays and noon to 5 p.m. Sunday. For more information, visit fraziermuseum.org.

Comilas Franklin Melvin of Raceland passed away February 22, 2021. Funeral services will be at 12 p.m., Saturday, at Carman Funeral Home. Visitation will be from 5 to 7 p.m., Friday, at the funeral home.