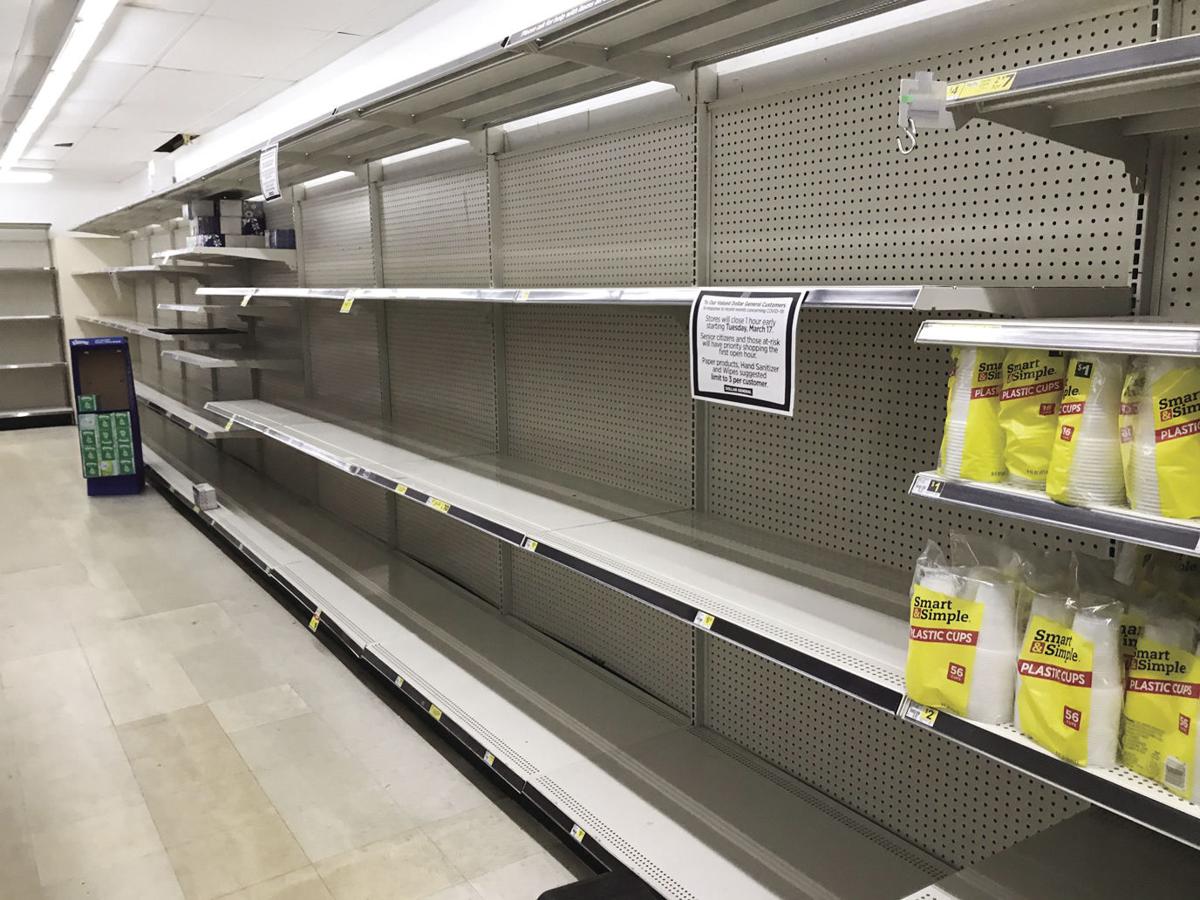 Empty paper products shelves at a local Dollar General store on Wednesday. The stores are closing one hour early before the next day of business and senior citizens and those at-risk will have priority shoppin the first open hour. Paper products, hand sanitizer and wipes suggested limit is 3 per customer. KEVIN GOLDY | THE DAILY INDEPENDENT 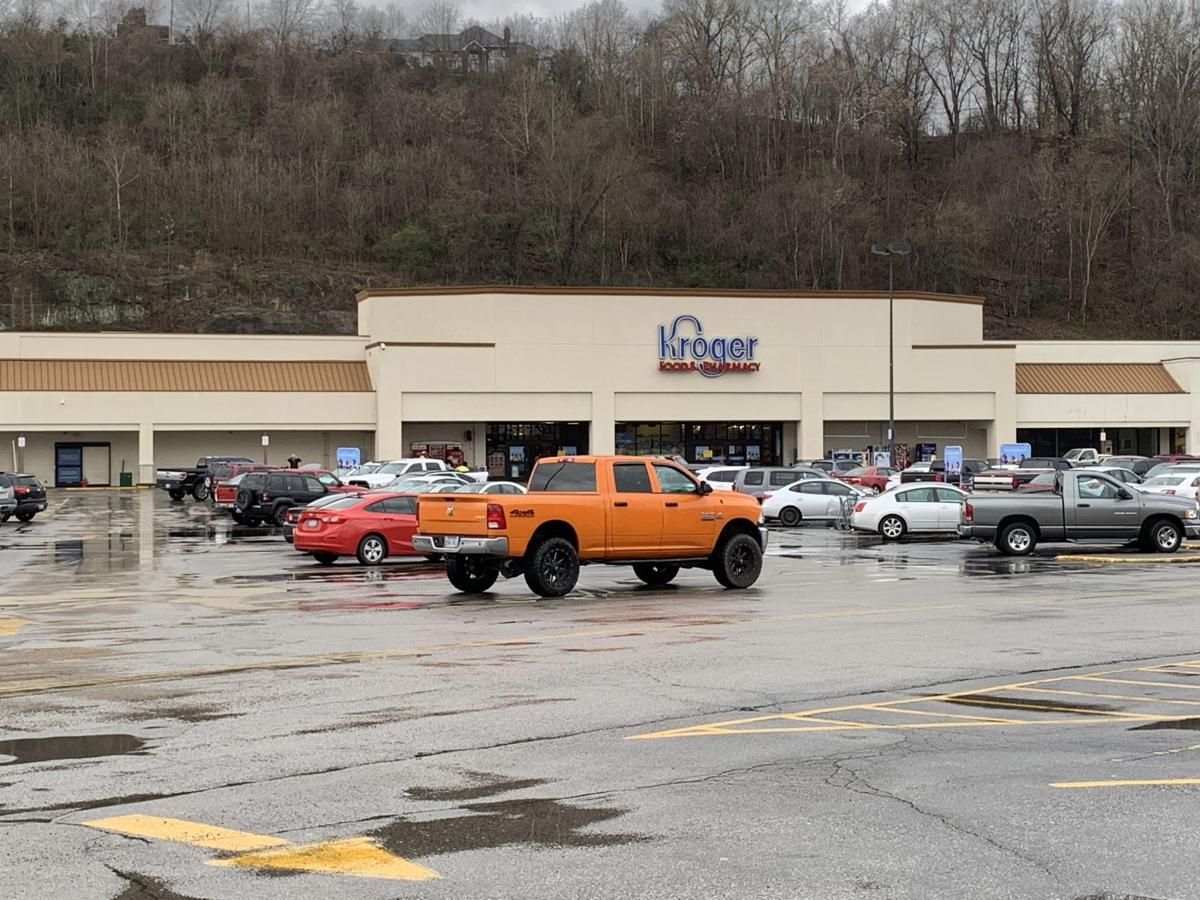 Pictured is the Mid-Town Kroger parking lot on Thursday afternoon.

Empty paper products shelves at a local Dollar General store on Wednesday. The stores are closing one hour early before the next day of business and senior citizens and those at-risk will have priority shoppin the first open hour. Paper products, hand sanitizer and wipes suggested limit is 3 per customer. KEVIN GOLDY | THE DAILY INDEPENDENT

Pictured is the Mid-Town Kroger parking lot on Thursday afternoon.

ASHLAND Less than a week after President Donald Trump declared a national emergency for the coronavirus outbreak, supermarkets and grocery stores are rejiggering their services to meet consumer demands.

Kroger, FoodFair, Walmart and Dollar General have all announced measures to keep products on the shelves, as well as increased sanitary conditions. Allison McGee, a Kroger spokesperson, said “high moving items” such as hand sanitizer, toilet paper and meat will have limits of three items per customer. She said the supply chain is still strong for food, but is asking customers to “buy what you need.”

“There’s still plenty of food and there’s no worry about running out,” McGee said. “We’re doing our best to keep the stores stocked and open.”

In order to keep down risk of catching COVID-19 inside Kroger stores, McGee said employees are doing around-the-clock cleaning. She said all stores in the Mid-Atlantic Division, which Kroger in the Fivco area fall under, will have hours between 7 a.m. and 10 p.m. to give employees additional time to stock shelves. Fuel centers will be open at 6 a.m.

Kroger stores in the area are hiring to keep up with the demand, with hundreds of open positions throughout the division. She said while child care issues have hampered some employees, it hasn’t ground check lanes to a halt.

Jonathan Williams, spokesperson for United Food and Commercial Workers Local 400, which represents the area’s Kroger workers, said workers are “obviously concerned about risk of being infected” and are demanding sick pay and child care arrangements in the wake of the crisis. He said a temporary designation of employees as first-responders — a move recently taken by Vermont and Minnesota — would result in free child care for employees working overtime in the wake of the crisis.

While the overtime is great for the paycheck, employees are already feeling the physical and mental toll, according to Williams.

“They’re putting their lives on the line working in this crisis, so we’re very concerned about their health and safety,” Williams said. “The big elephant in the room here is chronic under-staffing of grocery stores. They’ve been expecting a few employees to do more work over the years, and now they’re feeling it. Even if one employee calls out sick, it becomes an issue.”

Tom Forth, president of FoodFair, said the local chain is trying to “stay as normal as possible” in light of the crisis. Because it is a local chain with its distribution center based in Huntington, Forth said he had a good-sized stock of inventory ready to go quickly onto store shelves, instead of traveling hundreds of miles like in the case of Walmart and Kroger.

“It’s like going on a big trip; we happen to have a bigger gas tank,” Forth said. “Right now, we’re filled up pretty good, but at some point we are going to have to refill our gas tank.”

The trouble comes in trying to get supplies from food manufacturers, Forth said.

“We need to keep the goods coming in, but because we’re a small guy compared to Walmart and Kroger, it’s easier to get knocked off the end of the table,” Forth said. “So we’re working to elbow our way back in and get our orders in, because by design we can react faster to keep shelves full.”

As of Thursday, Forth said FoodFair had no ground beef in its warehouse. However, a shipment should come in Friday to distribute amongst the chain’s 19 stores in West Virginia, Ohio and Kentucky. Forth said so far, his stores have not experienced a labor shortage due to child care issues.

“My team has been resilient in the face of this,” Forth said. “On Sunday, we had a dozen employees — office folks, warehouse workers and store managers — in our distribution center getting product out the door to restock shelves. They’re taking the bull by the horns and stepping up in the face of this. We ask that you pray for our staffs to stay healthy so we can continue serving our communities.”

Walmart stores nationally have adjusted to hours of 7 a.m. to 8:30 p.m. in order to restock shelves and sanitize stores, according to a news release. Item limitations will include paper products, milk, eggs, cleaning supplies, hand sanitizer, water, diapers, wipes, formula and baby food. Vision centers will be open, while the automotive garages will be closed, per the release.

Dollar General is also instituting three-item limits on paper products, hand sanitizers and wipes per customer. Dollar Generals will also be closing an hour earlier to give employees time to clean the store and restock shelves.

Due to the vulnerability of the elderly to the coronavirus, both Dollar General and Walmart have announced senior citizen shopping hours. On Tuesday, Dollar General set aside the first hour of stores for senior citizens to avoid large crowds. Walmart announced Wednesday that from March 24 until April 28, a senior citizen hour will begin at 6 a.m. every Tuesday. The pharmacy and the eye care center will be open at this time.

Kroger is currently testing senior citizen shopping hours at locations out west, according to McGee. If those work well for the store, McGee said Kroger will roll it out nationwide.

On Thursday, the grocery store announced they will be accepting volunteers to do shopping for senior citizens. An individual volunteer or a group may call Food Fair at (304) 525-3293 and dial 0 in order to learn how to become a certified shopper. So far, the program will be going on Friday and Saturday at the Barboursville, West Virginia, location but Forth said it can be expanded if volunteers show interest at other locations.

“Right now, the Pea Ridge Baptist Church has volunteers for those two days, but beyond that we don’t know,” he said. “We’d like to expand that.”