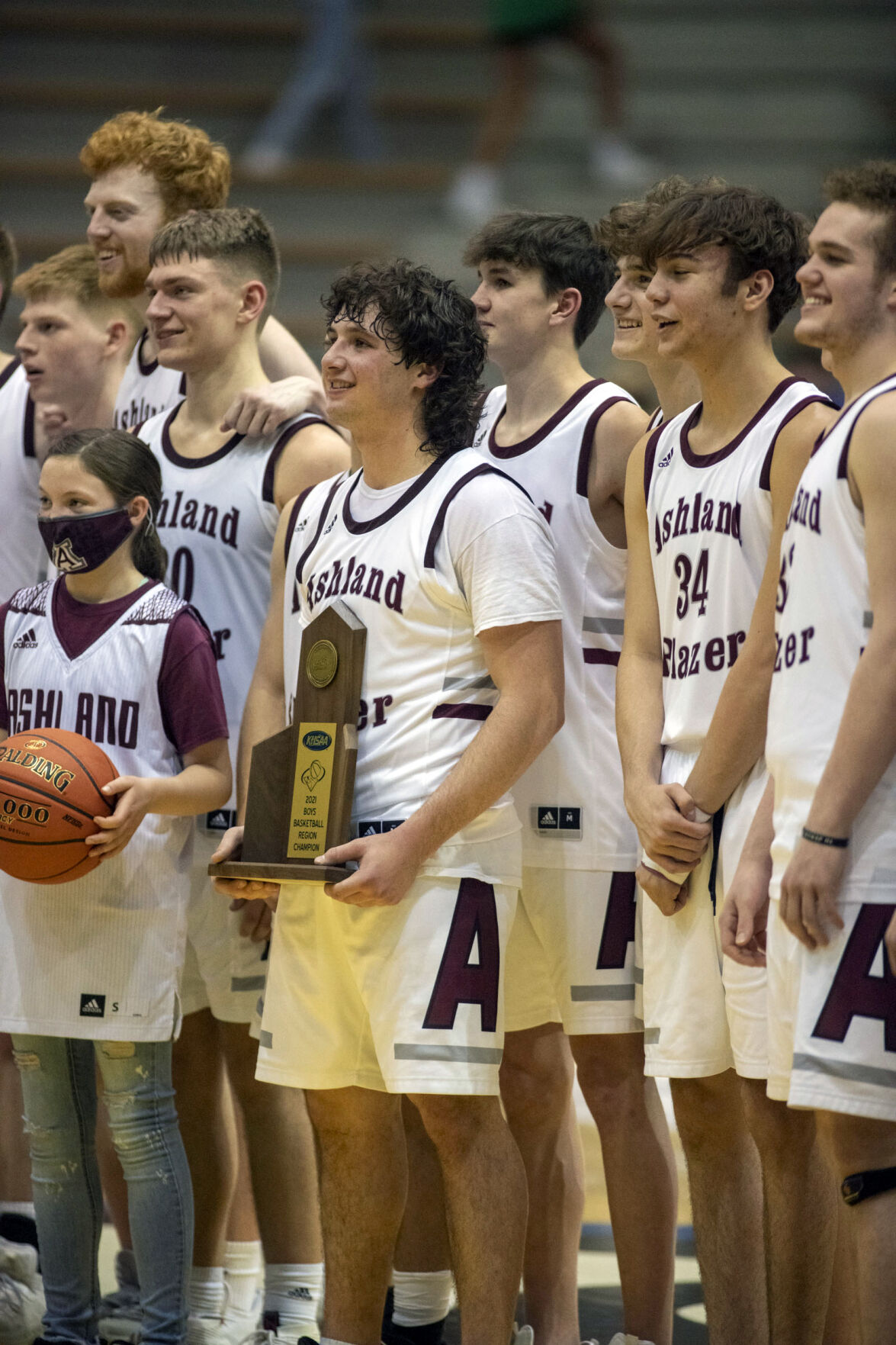 Hunter Gillum holds the 16th Region trophy as the Tomcats pose for pictures following their 62-58 win over Rowan County Saturday, March 27, 2021, during a semifinal game in the 16th Region Boys Basketball Tournament in Morehead, Ky. Photo by John Flavell / For The Daily Independent 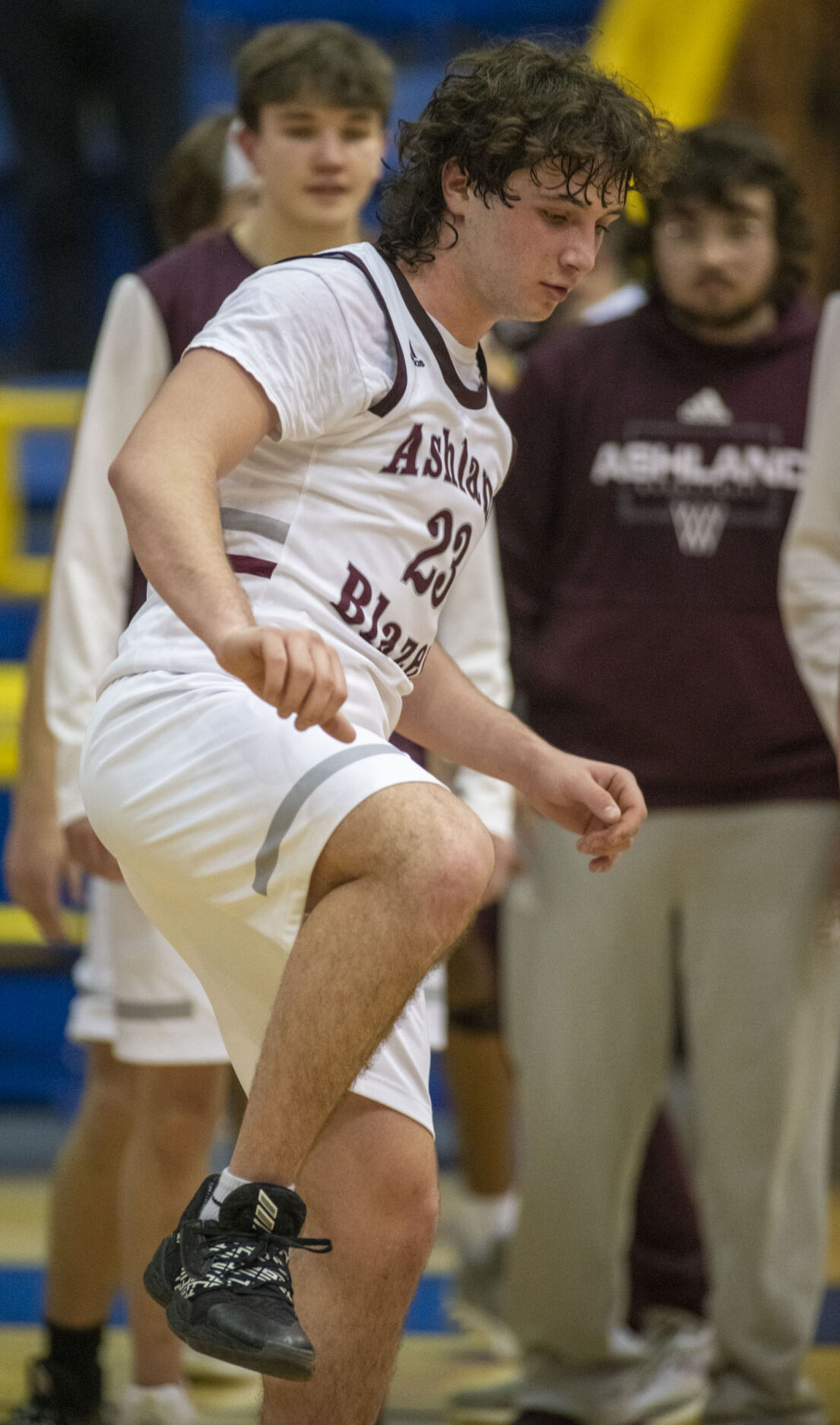 Ashland’s unter Gillum does a vitory dance after the Tomcats beaat Rowan County 62-58 for the 16th Regio championship Saturday, March 27, 2021, during a semifinal game in the 16th Region Boys Basketball Tournament in Morehead, Ky. Photo by John Flavell / For The Daily Independent 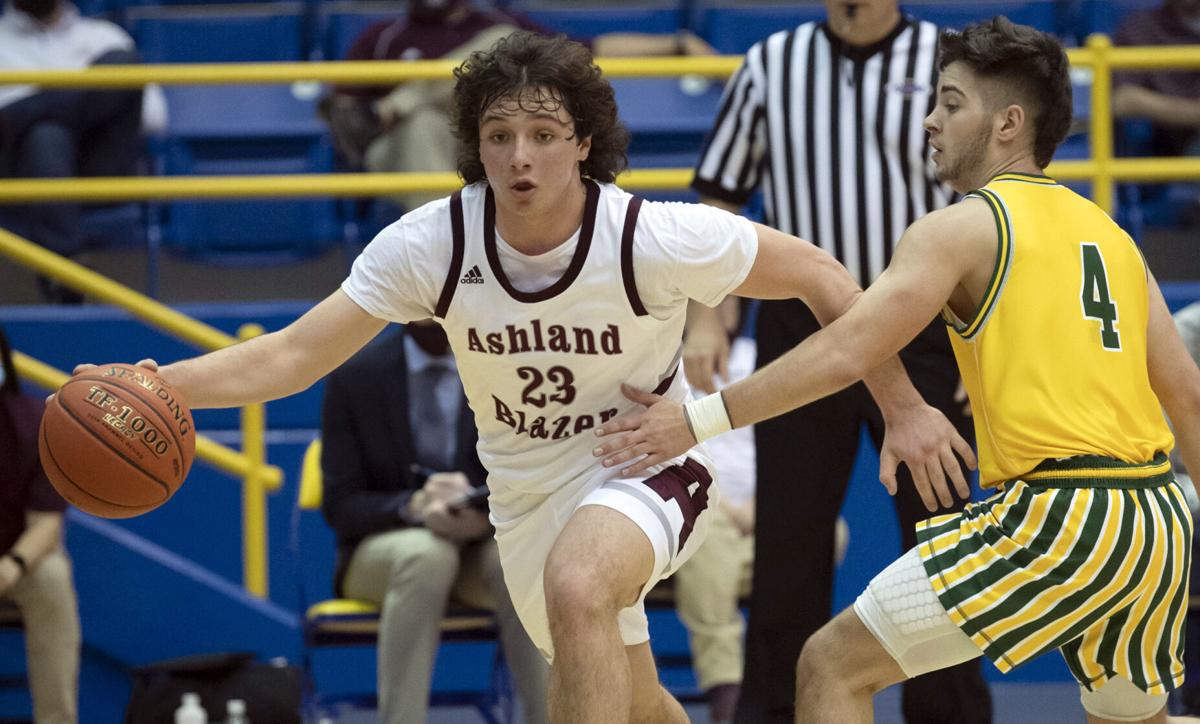 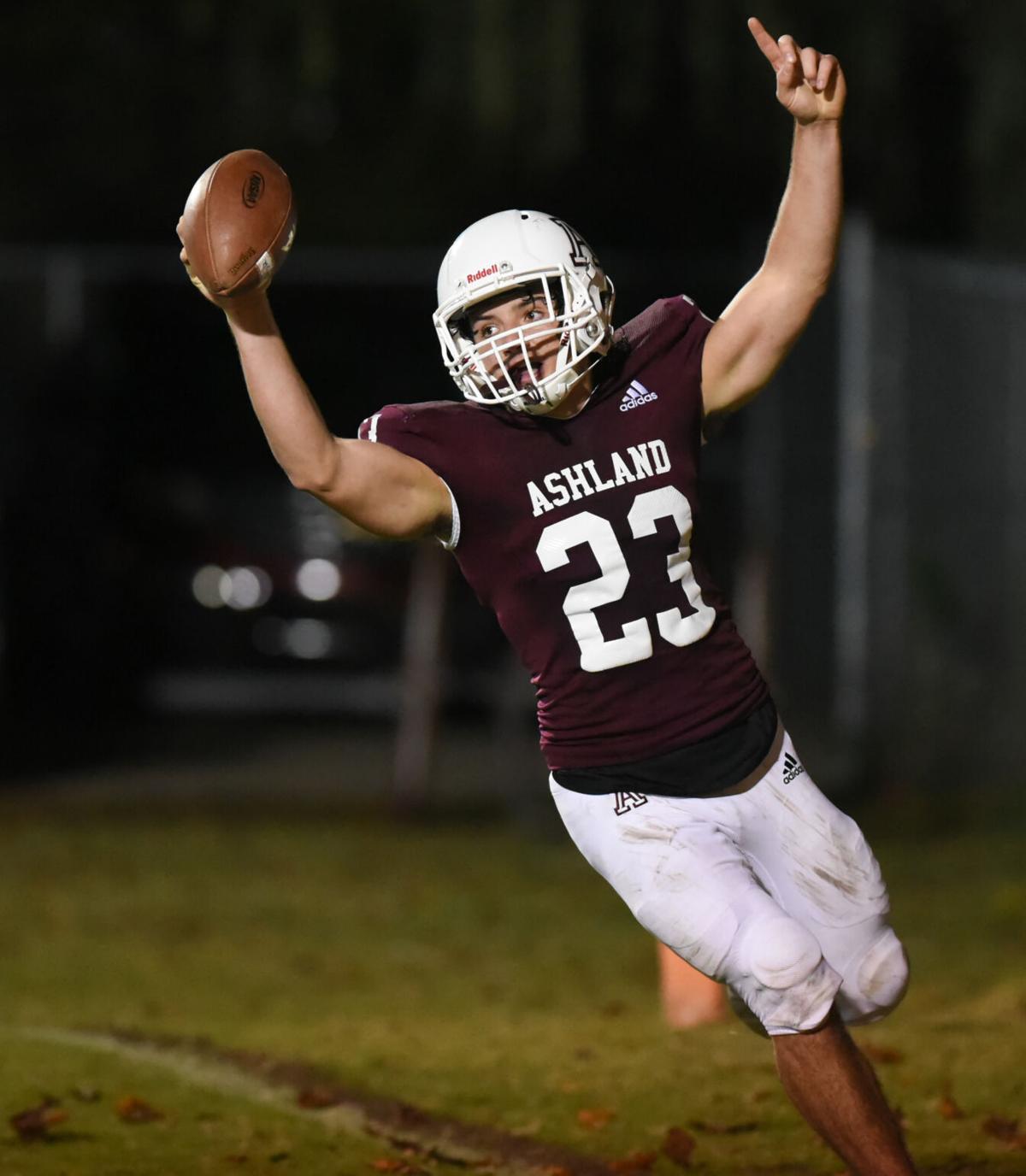 Hunter Gillum of Ashland celebrates after a touchdown against Russell on Friday evening at Ashland. MARTY CONLEY/ FOR THE DAILY INDEPENDENT

Hunter Gillum holds the 16th Region trophy as the Tomcats pose for pictures following their 62-58 win over Rowan County Saturday, March 27, 2021, during a semifinal game in the 16th Region Boys Basketball Tournament in Morehead, Ky. Photo by John Flavell / For The Daily Independent

Ashland’s unter Gillum does a vitory dance after the Tomcats beaat Rowan County 62-58 for the 16th Regio championship Saturday, March 27, 2021, during a semifinal game in the 16th Region Boys Basketball Tournament in Morehead, Ky. Photo by John Flavell / For The Daily Independent

Hunter Gillum of Ashland celebrates after a touchdown against Russell on Friday evening at Ashland. MARTY CONLEY/ FOR THE DAILY INDEPENDENT

Hunter Gillum wanted to wait for the right moment.

The maroon-drenched crowd inside Ellis T. Johnson Arena loudly voiced its desire to see the senior take the wide-open 3-point shot in a tie game with two minutes remaining in regulation.

Ashland, vying for a third straight 16th Region title that would send it back to the Sweet Sixteen after an undefeated Tomcats team was denied its chance last March, had fought its way back from double-digit deficit in the second half.

Gillum will never back away from the big moment. He runs at it full speed.

“I know I’m not the best of shooters,” Gillum said. “I do practice my shot and I will hit a shot here or there. I just know we have better weapons on this team. I’m more of a facilitator. I know what my role is on the team. It’s something that coach (Jason) Mays stresses.”

“I’m not going to try to be something that I’m not,” he continued. “I know we had Cole (Villers) and we had Ethan (Sellars). Colin was out of the game at that time. We always have shooters where they need to be for me. To shoot that shot, I felt it smarter for Cole to take that shot or Selly or Zander (Carter). Guys like that.”

His teammates know that Gillum, a senior, has good instincts on the court. Mays still wanted to make sure the guard was aware of the situation.

“I was also 5 feet behind him saying don’t you dare,” Mays said. “Hunter fully understands the moment.”

“He knows his limits, which is good,” Villers added. “Maybe if that was the first quarter, he would shoot it. He knows he’s not a great shooter, but he’s going to do whatever he can to help us win.”

Gillum doesn’t have to score to make an impact. After the choice was made not to launch from downtown, he found an opening 20 seconds later to record the Tomcats’ biggest bucket of the contest at that point.

He took the handoff from Sean Marcum, drove it hard into the paint, spun off his defender and laid it in for Ashland’s first lead since the opening quarter.

“I feel like I’m confident,” Gillum said. “I know when I have it and I know when I don’t. With the 3-point shot, I was not going to risk it. It was a close game. I’m not very effective from there, but I can drive and I never go against myself when I’m driving. I’m going to take that. I found an open lane and I went ahead and took that shot.”

Whether it’s patrolling the grass at Putnam Stadium or defending one of the opponent’s best players on the hardwood, two things at Ashland are synonymous: Hunter Gillum and winning.

The multi-sport athlete has been a major contributor in 64 wins in the since the beginning of 2019-20 basketball season, including 44 consecutive victories that culminated with a football state championship at Kroger Field in December.

“Hunter will go down as one of the biggest winners in Tomcat athletics,” Mays said. “Period. End of discussion. We know he’s physically tough. We know he’s mentally tough but he’s also probably the most compassionate person in our locker room. ... His character is second to none.

“Hunter knows his role,” he added. “He’s not going to score a bunch of buckets. He wants to play hard. He wants to guard you. He’s active at getting rebounds and makes sure the ball goes where it should go. ... If you could lay metrics on toughness, he would be off the charts.”

When Ashland needs an energy boost or change the complexity of a game, Mays turns to the spark plug that can ignite the Tomcats’ engine.

Villers said Gillum’s teammates aren’t the only ones that feels the environment change when he checks into the game.

“I think the other team feels the energy when he gets on the court, too,” Villers said. “Our fans feel it. He brings an attitude and demeanor that no one else on the team has. He is so confident. He’s never focused, which is a good thing for him. He’s told me a million times that whenever he’s not focused, he plays better. I just let him do what he does. Everyone takes notice when he’s in the game and it makes a big impact.”

Gillum can also lighten the mood in the locker room and during practices. He shows the charisma of a leader who will also lead by example with his work ethic.

“You got let the moxie of a kid like that come through,” Mays said. “You can’t suppress it. He is very active on social media. He knows all the rules. He knows what the lines are and want to cross and what not to cross. We trust him. You got to let a guy be a guy and that’s definitely true with Hunter.”

Gillum brings a winning mentality from the football field where he shined a running and defensive back. He believes that mindset is engrained in every soul that dons an Ashland jersey.

“The Tomcats always stress a will to win,” Gillum said. “Everybody over there on the football team is a winner. I just bring that over here. Everybody here is a winner, too. It’s just the Tomcat tradition. It’s going to stay with us through our lifetime. I brought that mentality over here and just add it to the team.

“It’s the same, just different-sized balls,” he continued. “Everything else is kind of the same thing.”

Mays calls Gillum a valuable part of his program. He extended that value in the region championship when Porter left the game after picking up his fifth foul with five minutes left in the fourth quarter and perhaps taking Ashland’s region hopes with him.

Mays wasted no time calling Gillum’s number. He took over the ball-handling duties and the Tomcats eliminated a nine-point Vikings lead two minutes later. Gillum hit Villers at the top of the key and the junior calmly splashed a go-ahead 3-ball in the final seconds of regulation.

“I don’t like being on the ball,” Villers said. “I’d rather be off the ball so I can score more. Whenever Colin went out, I was like man, I might have to play point guard.  Hunter came in and was bringing the ball down the court and found open shooters. Colin is a pure basketball player but Hunter came in and it could not have been better for us in that situation.

“Hunter is just a winner,” he added. “He won 44 straight games as a Tomcat. You can’t do that unless you’re a winner. He’s won a state title. They played great in the football state championship and he’s played great the entire postseason for us.”