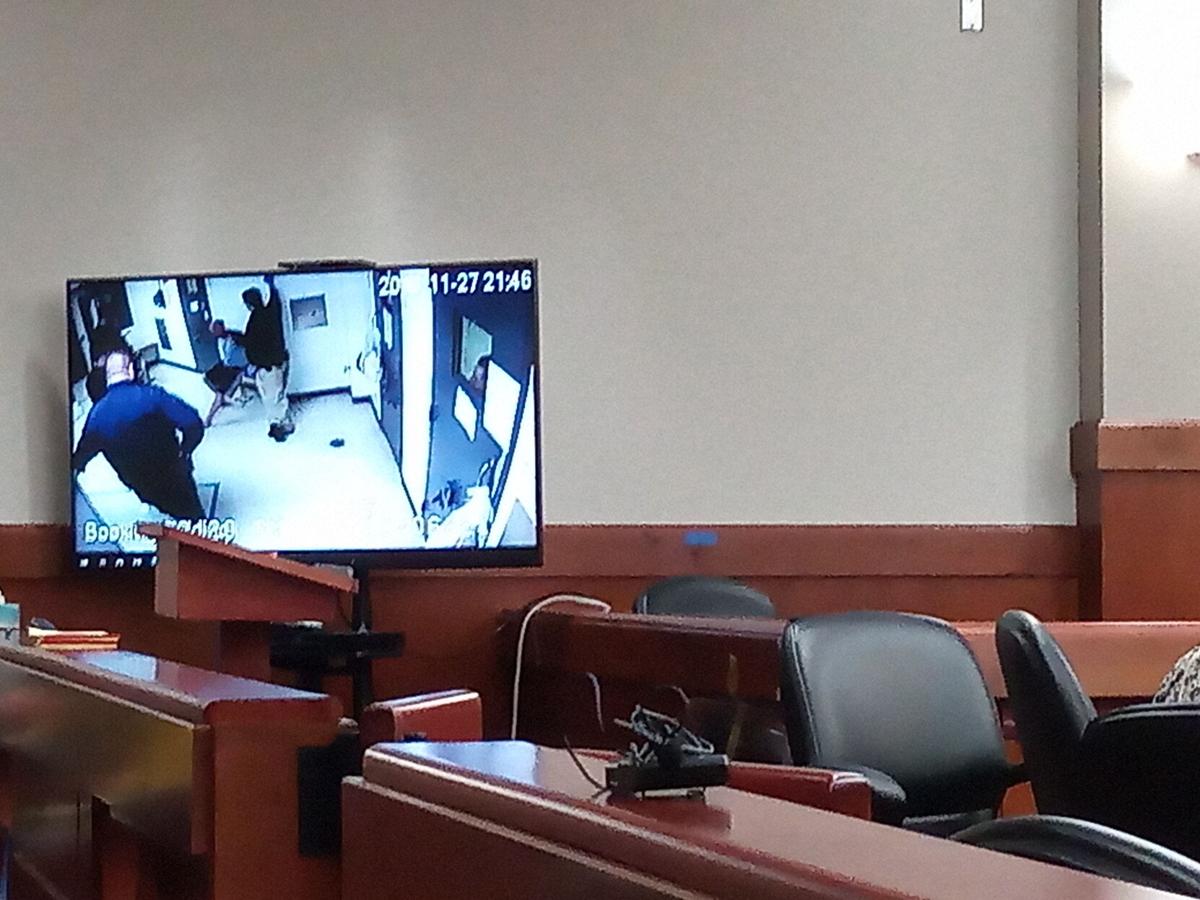 A stillshot of one of the 28 videos of evidence is shown on Wednesday. 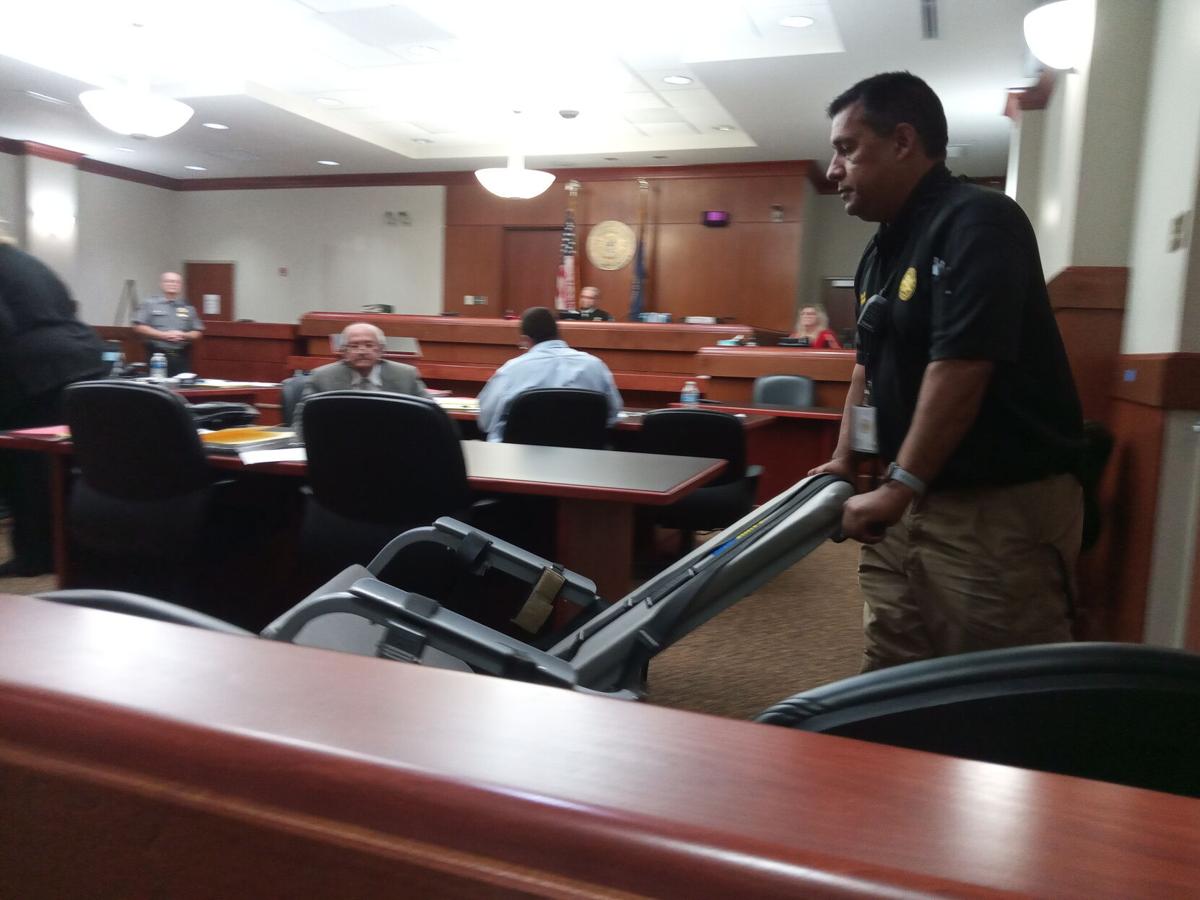 Major Gus Guzman rolls a restraint chair for the jury to see. 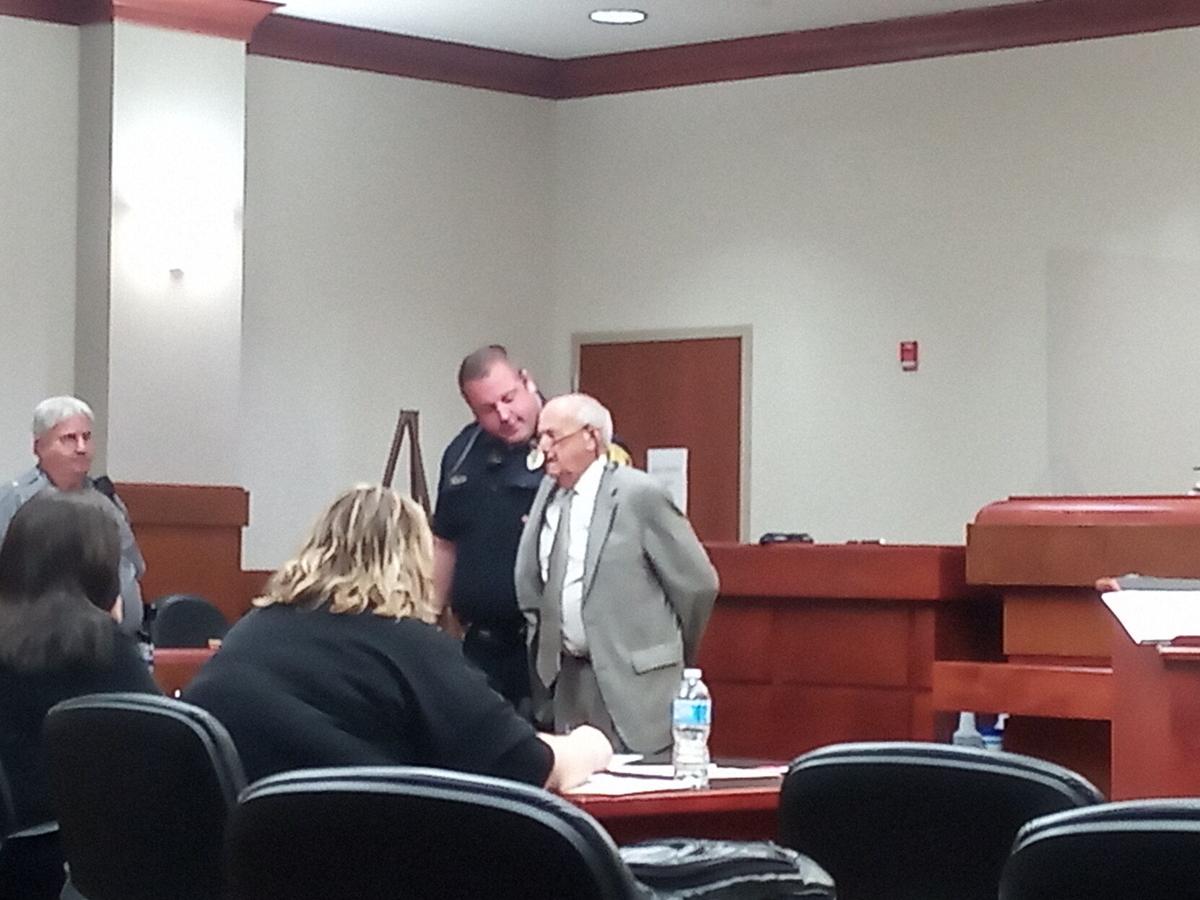 A stillshot of one of the 28 videos of evidence is shown on Wednesday.

Major Gus Guzman rolls a restraint chair for the jury to see.

CATLETTSBURG The jury saw snippets of the last 36 hours of 40-year-old Michael Lee Moore's life Wednesday, witnessing him being thrown into a chair, bodyslammed on the floor and falling from the top bunk of his bed.

The footage — 28 videos total, four of which show the arrest of Moore by Ashland Police — marked the first day of actual testimony in the trial of Brad Roberts, a former sergeant at the jail. Roberts is the first of four jailers deputies to be tried on one count of first-degree manslaughter and 16 counts of first-degree criminal abuse in the November 2018 death of Moore.

Despite numerous technological delays, Commonwealth's Attorney Rhonda Copley managed to show the jury the footage during the direct examination of Major Gus Guzman of the Boyd County Detention Center.

The footage shows Moore being brought into the BCDC at 8:49 p.m. on Nov. 27, 2018. Moore, according to testimony from his sister-in-law, was high on baclofen and acting erratic when he was arrested for public intoxication.

Baclofen is a muscle relaxer — typically, those act more as a downer and are often used to enhance the effect of other depressants such as painkillers and alcohol. Erratic, quick movements are typically common as a result of stimulant abuse, like in the case of methamphetamine or cocaine.

Most of the abuse the commonwealth alleges in the case occurred in the booking area of the jail — of which, five deputies were working on the night of the 27th. Roberts, according to Guzman, was in charge.

In the footage — which had no audio — Moore is led into the booking area and placed in a corner, before being handcuffed to a bench. He is then led to the restroom to change into an orange jumpsuit. Upon coming out, deputy jailer Zachary Messer places him in the corner — Moore's head is slammed into the wall, then he sits down.

During a scuffle, he is bodyslammed into the floor before being strapped into a restraint chair.

Moore remains in booking for the rest of the evening into the morning, per the footage. At one point — around 1:20 a.m. on Nov. 28, 2018 — footage shows Roberts with a TASER in his hand, but it is unclear when the TASER was used on Moore as the Commonwealth alleges.

About 10 minutes later, they flip Moore over, with his back on the floor while strapped in the chair, per the footage.

Throughout much of the footage, Moore is seen wriggling and struggling in the restraints. At 1:34 a.m., they flip him back up and Roberts appears to flick Moore in the ear. At this point, a trustee delivers an orange jumpsuit to booking for another inmate being lodged at the jail.

An hour later, Roberts is chatting with co-workers, leaning against Moore like one does on the bed of a pickup truck. They then release him from the chair for a bathroom break — Moore appears to make his way to the control room, at which point Messer grabs him and flings him into the restraint chair.

Later on in day shift, which begins at 6 a.m., Moore is still in the restraint chair between 8:47 a.m. and 3:44 p.m. The day shift deputy jailers appear to be gentler with Moore — instead of stepping on his feet to strap him in, they grab his ankles and hold his legs still. Unlike the night shift, the day shift is not shown on camera entering the rest room with Moore, but leading him to the door and awaiting outside.

During that time, they also have a nurse check on Moore.

Guzman said the procedure and protocol for using the restraint is when there is concern someone is either at risk for self-harm or harm of others. Reading off a poster that was displayed in the booking area, Guzman said a person can only be held in the chair for two hours at a time, and could not be held longer than 10 hours without medical supervision.

Guzman also said at the time of the incident, no one was actually trained in how to use the chair, nor did supervisors receive any training besides what they learned on the job.

At 4:52 a.m. on Nov. 29, 2018, Moore is shown on the video attempting to climb a bunk in cell C. Before making the climb, he goes to the floor and lays still. An inmate is seen running off camera — deputy jailers arrive between 4:53 and 4:57 a.m. and talk with Moore, who is by then sitting up. They then leave.

Footage shows, at 5:49 a.m., Moore is laying on the top bunk when he sits up on the edge of the bed. He then falls off and a bunkee runs for help. Moore is laying still on the floor for about eight minutes before deputy jailers pull him up and walk him outside the cell.

Hallway footage shows Moore walking out, before crumpling like a sack of potatoes. A clip from the stairwell shows the deputy jailers, with trustees behind them, sliding Moore down the stairs on a green sleeping mat.

Guzman testified during direct examination that Moore was inaccurately logged in the jail system and did not have a mug shot taken on the night of his arrest.

At 5 p.m., Judge George Davis called it a day and asked for the jury to be back at 8:45 a.m. Thursday for Day 2 of testimony. The trial began Monday, with jury selection stretching until about 3:30 p.m. on Tuesday, followed by opening statements from Copley and defense attorney Michael Curtis.

The case will resume with the cross-examination of Guzman by Curtis.

Here's some other testimony from Wednesday:

• Moore's sister-in-law testified to him showing up at her house in the afternoon of Nov. 27, 2018, after leaving drug rehab he'd been staying at for 63 days. At first Moore appeared to be all right, but then he began acting strange — repeatedly saying the F-word and pacing the house, she testified. At 7:30 p.m. on Nov. 27, 2018, the sister-in-law testified that Moore was outside the home trying to pick a fight with a neighbor. It's at that point she called 911 — the neighbor did, too, per 911 calls heard in court. Moore was not injured at the time of the incident, she testified.

• Officer John McCormick (APD) testified he arrested Moore on a charge of public intoxication. He said Moore did not have any injuries, except he may have cut his foot in the cruiser. He testified Moore was shoeless and wearing only a shirt and a shorts at the time of his arrest. The temperature was only 20 degrees outside. During cross-examination, Curtis hammered McCormick on why he didn't take Moore to the hospital for acute intoxication on a drug unknown to the officer. McCormick said he believed Moore was intoxicated, but not to a degree that required medical attention.

• Officer Demarius Gulley (APD) testified he served as backup on the call. He too said Moore did not appear injured.