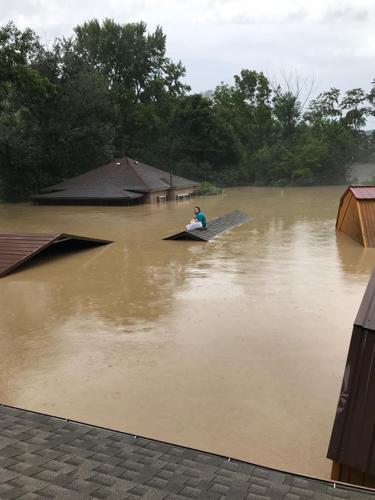 Chloe Adams is seen holding her dog, Sandy, sitting on a nearby storage building’s roof. 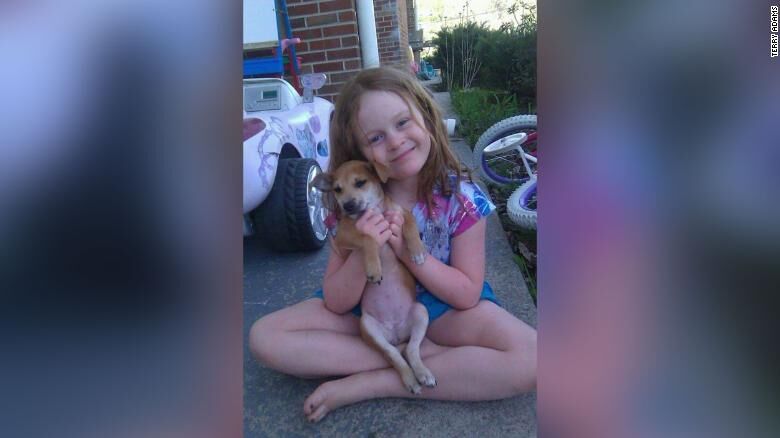 A younger Chloe Adams and Sandy.

Chloe Adams is seen holding her dog, Sandy, sitting on a nearby storage building’s roof.

A younger Chloe Adams and Sandy.

A Whitesburg girl has drawn media attention for rescuing her dog, and herself, from eastern Kentucky flood waters.

Chloe Adams, a 17-year-old senior at Letcher County Central High School, was home alone with her dog, Sandy, Thursday when water began coming through the drains. With poor cell service and a 911 center which was likely overwhelmed, Adams, who was in a panic, did what she believed she needed to do to survive: she swam.

“I put Sandy in the water momentarily to see if she could swim. But she couldn’t, so I scooped her up and went back inside, wading through the waist-deep water to try to locate something that she could float to put her on,” she told CNN.

She found a plastic drawer in her closet to keep Sandy dry, put it atop a sofa cushion and pushed the cushion as she swam to the roof of a nearby storage building, which was at least 30 feet away.

“Swimming through the flood waters was terrifying,” she told The Daily Independent via text message. She said she is not speaking on camera or phone with the media because of the anxiety she’s experiencing.

“I felt that I had no option, sink or swim. It was extremely cold and the current was strong. I knew taking that chance could cause mine and my dog’s death but also potentially save us,” she texted.

Adams and her dog were on the roof for about five hours before her cousin, Larry Neal Adams of Whitesburg, used a kayak to rescue them. During the ordeal, her family was sheltering on the second floor of a nearby home and were able to keep an eye on her.

Adams said her dog was uninjured, but she has “a huge knot on my right leg next to my knee, a bad sunburn and a few cuts on my legs.”

Adams’s father, Terry Adams, who lives in Lexington, said he was proud of her. In a social media post he said: “My daughter is safe and whole tonight. She saved her dog by putting her in a container that would float and then swam with her to a neighboring rooftop. She waited hours until she could be rescued. She is a hero. I love you Chloe. You are simply amazing.”

He also appreciated the cousin who rescued her: “Thank you Larry; words are not enough. We lost everything today ... everything except what matters most.”

When the teen returned to her grandmother’s home, she broke down, “from the relief of knowing Sandy and I survived the flood,” she said. “My heart goes out to all the other people who lost and suffered so much more than I did in this horrific devastation.”