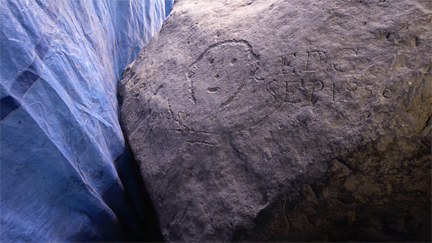 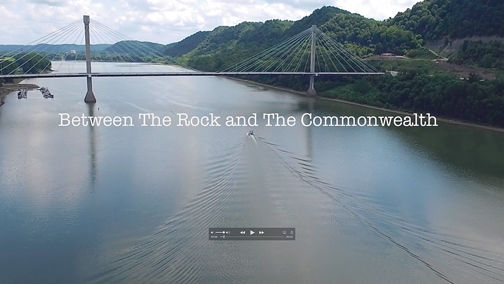 Title screen for the new documentary on the Indian Head Rock.

Title screen for the new documentary on the Indian Head Rock.

MOREHEAD — For a boulder that has tried its best to mind its own business, the Indian Head Rock can’t seem to keep out of the limelight.

A decade ago, it was the subject of a much-ballyhooed tug of war between Kentucky and Ohio after it was removed from the Ohio River by a local historian.

And now it is the star of a documentary by a Morehead State University instructor and filmmaker who set out to chronicle the rock’s history and the forces that thrust it from watery obscurity to temporary national prominence.

“I wanted to tell the rock’s history and why, for  a short time, it was in the national media and now it is in a garage covered by a tarp,” said Steven Middleton, whose film will be screened at 6:30 p.m. Wednesday at Coffee Tree Books in Morehead.

“The documentary tells the story about the rock, and through the rock the ebb and flow of history in the region,” he said.

Middleton had never heard of the Indian Head Rock when David Bocook, a Greenup County sheriff’s department detective who also is a filmmaker, called him suggesting it as a documentary subject.

Middleton also spoke to Greenup County outdoor writer Tom Clay, who had written about the rock for Kentucky Explorer.

Middleton, who had completed films on offbeat Kentuckiana called “Commonwealth Curiosities,” read what he could find online and thought a feature on the rock would fit in.

The story, in brief, goes like this: the Indian Head Rock was a well-known, although not always visible, landmark in the Ohio River between South Shore and Portsmouth and, during the 19th century, boaters and swimmers would approach it when the water was low and it poked above the surface.

The rock was inscribed with crude carvings, of Native American origin, some believed. Visitors in those less archeologically sensitive days sometimes left their own carven mementos.

When locks and dams were built in the 20th century and water levels rose permanently, the rock disappeared, also permanently — or so it seemed.

In 2007, an Ohio historian named Steve Shaffer recruited a small band of like-minded history enthusiasts and scuba divers, found the eight-ton boulder and lifted it out of the river. They took it to Portsmouth, where they thought the city would display it as a historical monument.

However, Shaffer had run afoul of antiquities laws and Kentucky’s state sovereignty — the Kentucky state line encompasses the width of the river to the low water line on the Ohio side.

The archeological community and Kentucky officials swiftly objected and the rock’s fate — and Shaffer’s too, because he was slapped with criminal charges — ended up in court.

Eventually, the rock was returned to Kentucky, and charges against Shaffer dropped, but not before national media churned out stories that snickered over the interstate rivalry.

And since then, the rock has bided its time in a bay of the Greenup County highway garage.

Middleton assembled his own team of filmmakers and collaborators, including co-director John Tanner Blevins, students in MSU’s convergent media program under the direction of faculty member (and former Daily Independent lead photographer) John Flavell, and father and son musicians Scott and Elijah Miller of the Kentucky Center for Traditional Music.

He interviewed major players in the 2007 from both sides of the river. “I wanted to be completely neutral and let the audience decide,” he said.

Middleton remembers making the call to Conway’s office and Conway returning the call laughing at the memory.

Time apparently has soothed tempers — and rhetoric — that ran hot during the tug of war, and Middleton says now the common thread among those he interviewed is a desire to see the rock displayed appropriately.

He is hoping his cinematic study may inspire some would-be archeologist.

Public television station WOSU will air the documentary in June and KET will show it in July.