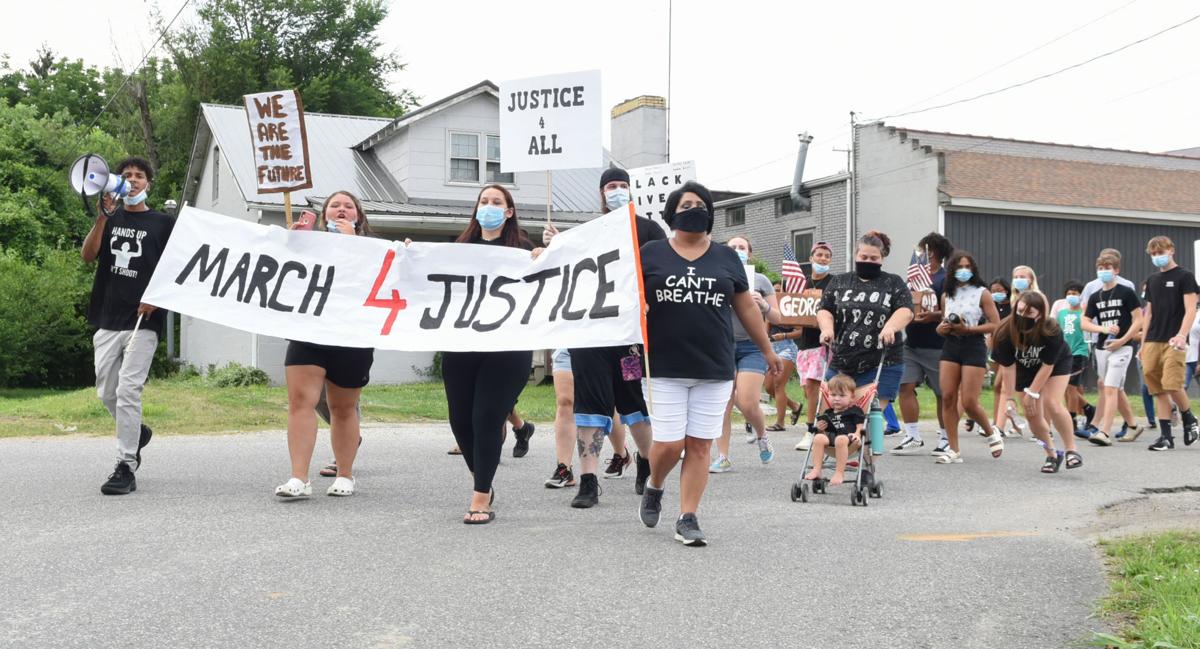 A crowd marches on Friday evening during a March for Social Justice event in South Point, Ohio. 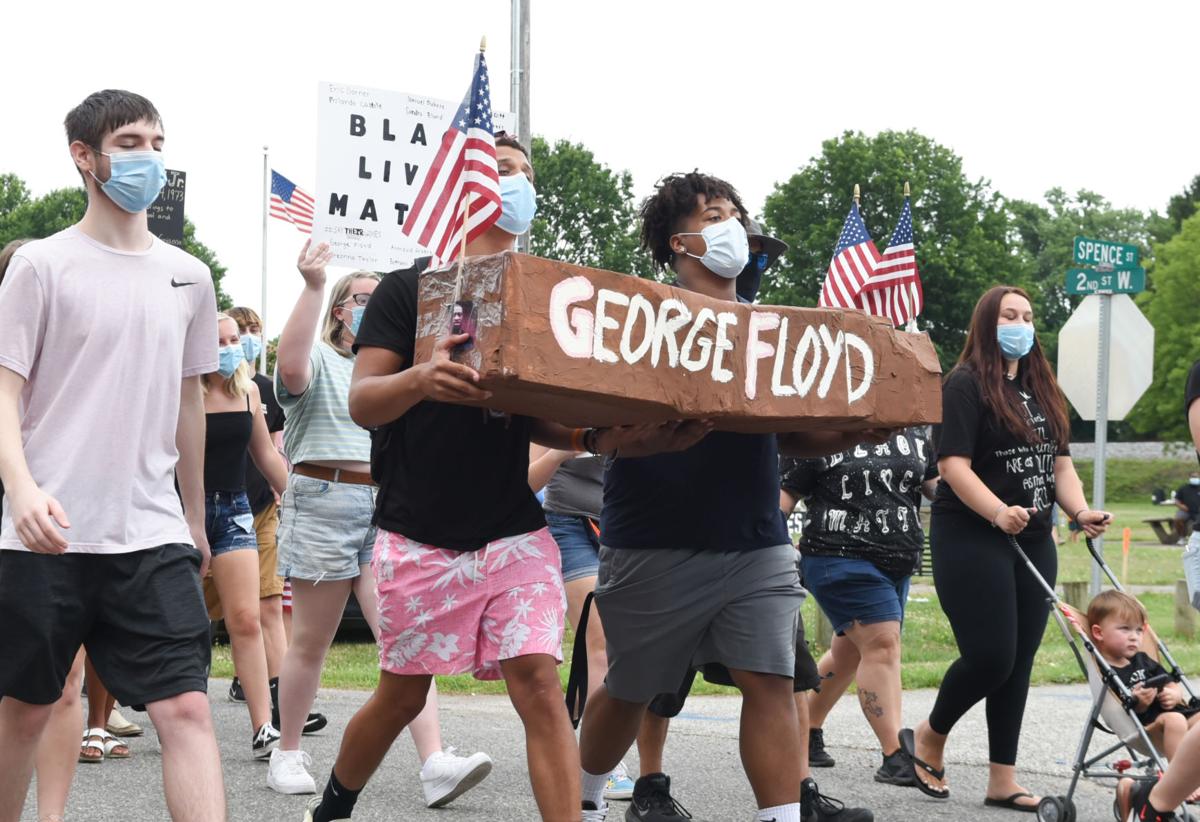 A crowd marches on Friday evening during a March for Social Justice event in South Point, Ohio. Marchers are carrying a paper mache coffin to symbolize George Floyd. 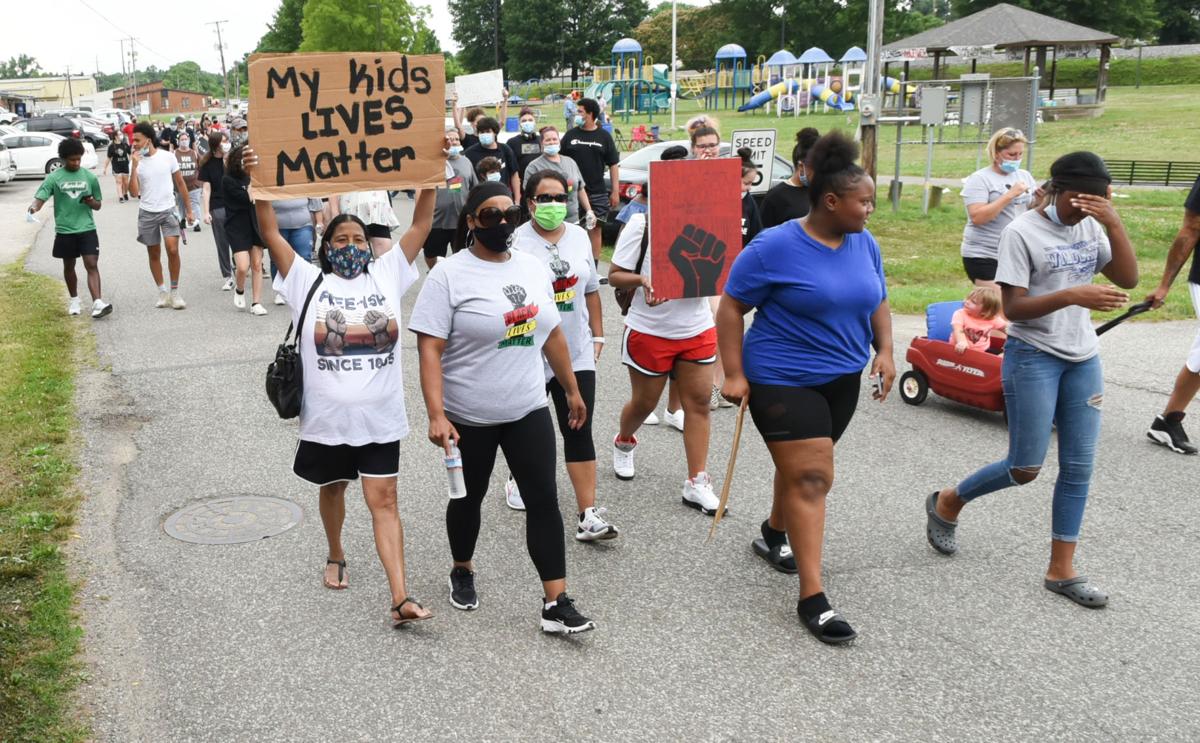 People carry signs during the March for Social Justice in South Point on Friday.

A crowd marches on Friday evening during a March for Social Justice event in South Point, Ohio.

A crowd marches on Friday evening during a March for Social Justice event in South Point, Ohio. Marchers are carrying a paper mache coffin to symbolize George Floyd.

People carry signs during the March for Social Justice in South Point on Friday.

SOUTH POINT The crowd of roughly 150 people was beginning to thin out Friday evening when Ironton football coach Daniel Murphy assumed the band stand at the South Point city park.

And so was the crowd.

Not just from marching from the park, across town to Hooper Street, where the barges sit docked on the banks of the Ohio. Not from the humid heat causing the sweat to pour off the demonstrators’ brows, driving folks to swarm the coolers of the ladies camped out in the Church of Christ parking lot handing out waters.

Young men at the head of the procession shouldered a paper mache coffin symbolizing George Floyd — the Black man whose brutal killing by Minneapolis Police last month has sparked a wave of protests that have renewed calls for police and criminal justice reform from New York City to Pikeville.

While some locals expressed concern about possible violence from the march at Ohio’s southern tip, the only time someone balled a fist was to throw it up in the air.

Prior to the march setting off, a trio of pickup trucks circled the gathering crowd, revving engines and waving American flags.

“You saw them trying to intimidate us,” lead organizer Austin Johnson told the crowd.

“If they try to mess with you, don’t do anything,” Johnson said. “We’re the peaceful ones.”

The trucks made no cameos during the march — a video shown by one activist to The Daily Independent appeared to show the driver of one of the trucks undergoing a field sobriety test by South Point Police.

There were plenty of speeches before the “march that broke the ceiling,” as Johnson called it.

Local Black pastor James Reed gave an invocation, praying for unity and an opportunity for “people to say their piece.” Johnson rattled off his stump speech, recalling the “disgust and lost feeling” he had viewing that 8 minutes and 46 seconds that turned George Floyd into a martyr for a movement. Johnson called on people to vote, educate and pressure politicians to make the changes to end structural racism.

City Councilman Brad Adkins, a self-described “red tie wearing conservative,” recalled the small town’s history as a beacon of liberty for fugitive slaves escaping antebellum Virginia and Kentucky prior to the Civil War. Adkins, a pastor as well, called not on “washed up politicians in Washington D.C. and Columbus to solve our problems” but Jesus Christ and grass roots activism.

“I’ve received some backlash for coming out here and speaking with you, but as a conservative, how can I be pro-life when Black men and women are being killed?” Adkins told the crowd. “You can’t say all lives matter when our Black friends are under attack.”

Murphy wasn’t tired from the marching and the orations.

Murphy continued, “But yet, even though I am tired, I will not quit. For I will look to hills from which cometh my strength. I will pray to the heavens that I will not cease. I will be committed as the Moses of old and as Malcolm and Mart did in their day. But I will not be them, I will not part the seas of justice, but I will get my feet in the water like Joshua did.”

Though the crowd was tired, sitting in the grass and eating popsicles — the customary snack during these hot area demonstrations — they clapped with fervor.

Murphy told The Daily Independent he could no longer be silent about race.

“It’s too often we idly stand by when things like this happen, and they’re always saying it doesn’t happen around here,” Murphy said. “I could share stories upon stories upon stories. I share my stories with people about the racism I’ve felt and people say, ‘Daniel, we’d go hunt those people down for you. We’d go fight for you.’ Yet, they go on Facebook and make a mockery of the change we’d like to accomplish,” Murphy said. “I’m just tired.”

Murphy said his mother raised 19 children, a mixture of adopted and her own. A white child was once placed in her home by the foster care system — the girl got on the phone, called home and called the family a racial slur. When the case worker showed up to pull the girl out of the house, Murphy said his mom told them to leave her here.

“She told the case worker, ‘the people that taught her that was her family. If I want to change her family, I need to change her heart.’ I swear to God, before that young lady left my mom’s house, she called her mom,” Murphy recalled.  “She changed her heart. Sometimes that means getting uncomfortable.”