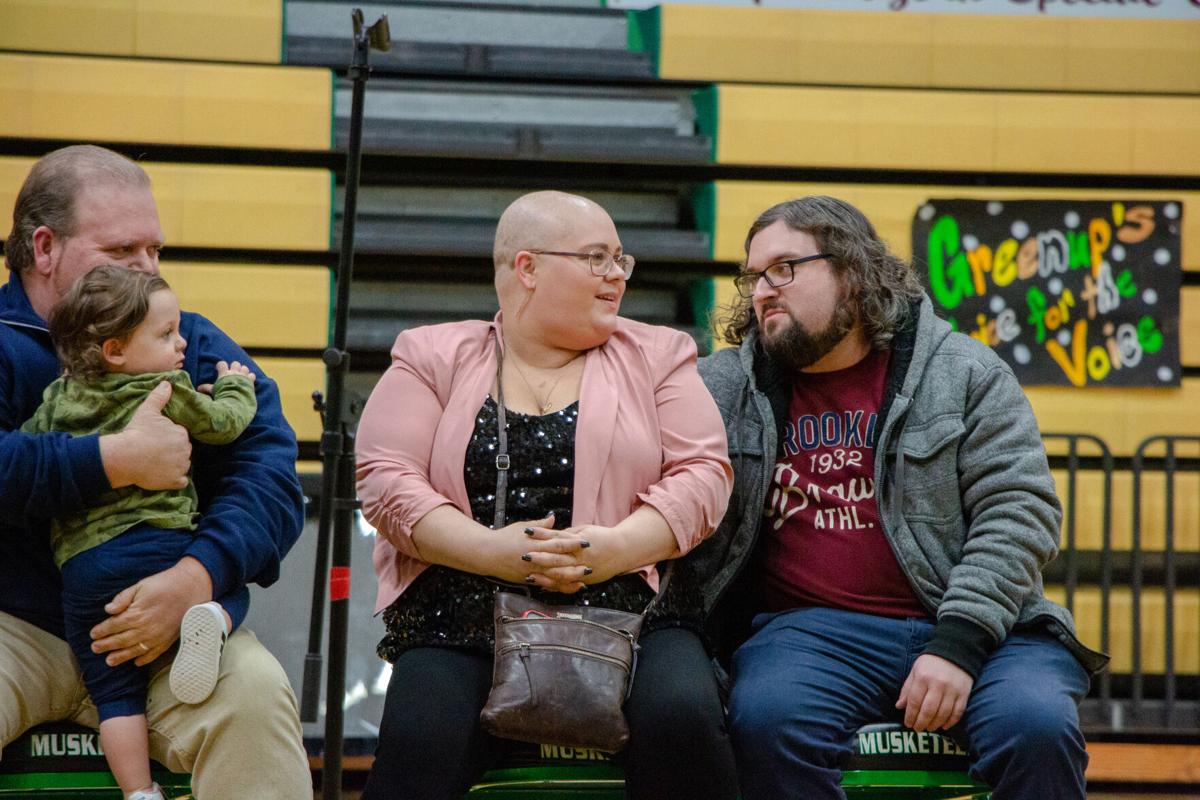 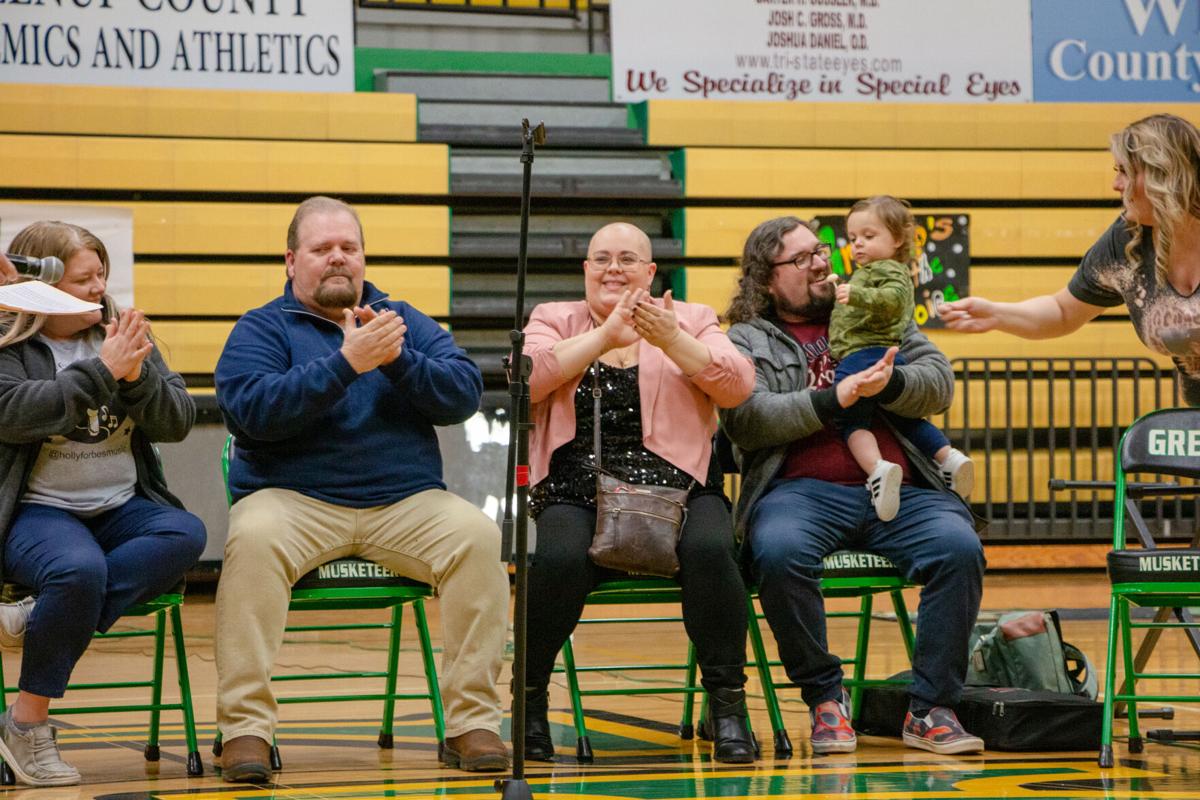 Holly Forbes sits with her family and recieves a proclamation to make Dec. 6 Holly Forbes Day in Argillite. Emily Porter | The Daily Independent 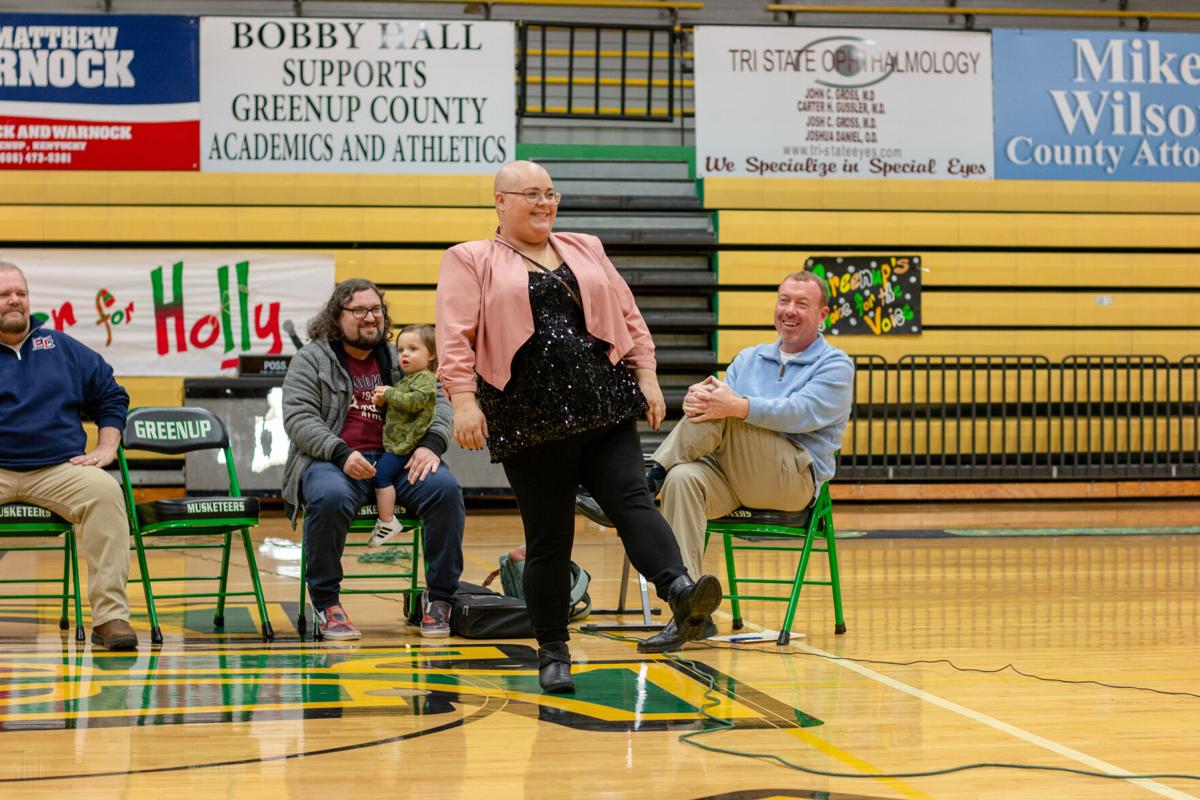 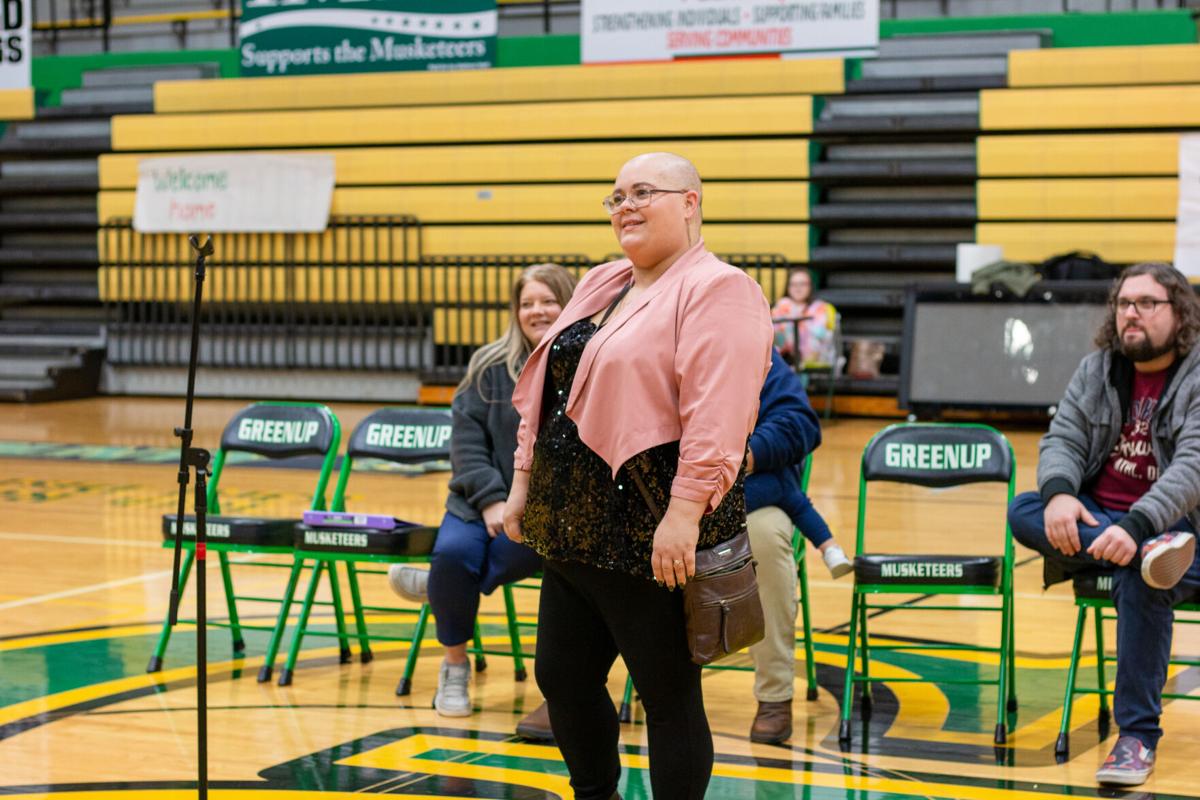 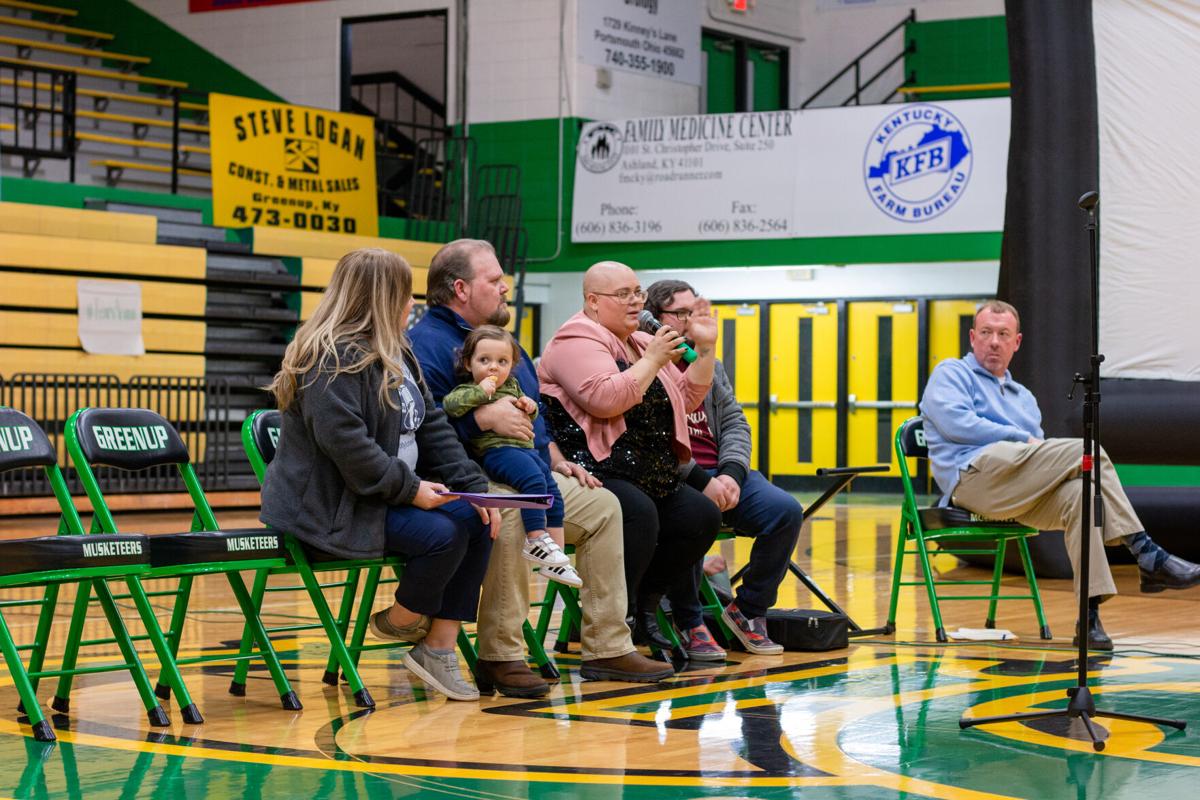 Holly forbes sits with her family and talks to the crowd at a homecoming celebration in Greenup. Emily Porter | The Daily Independent 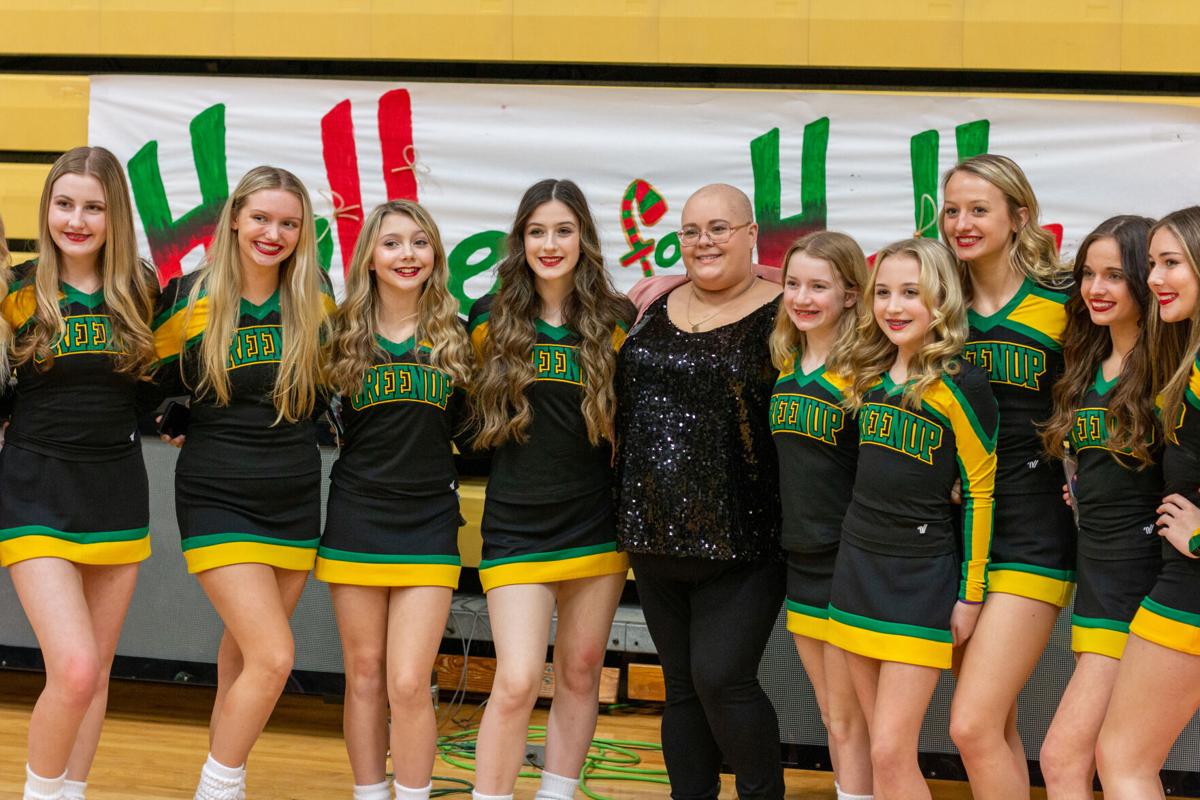 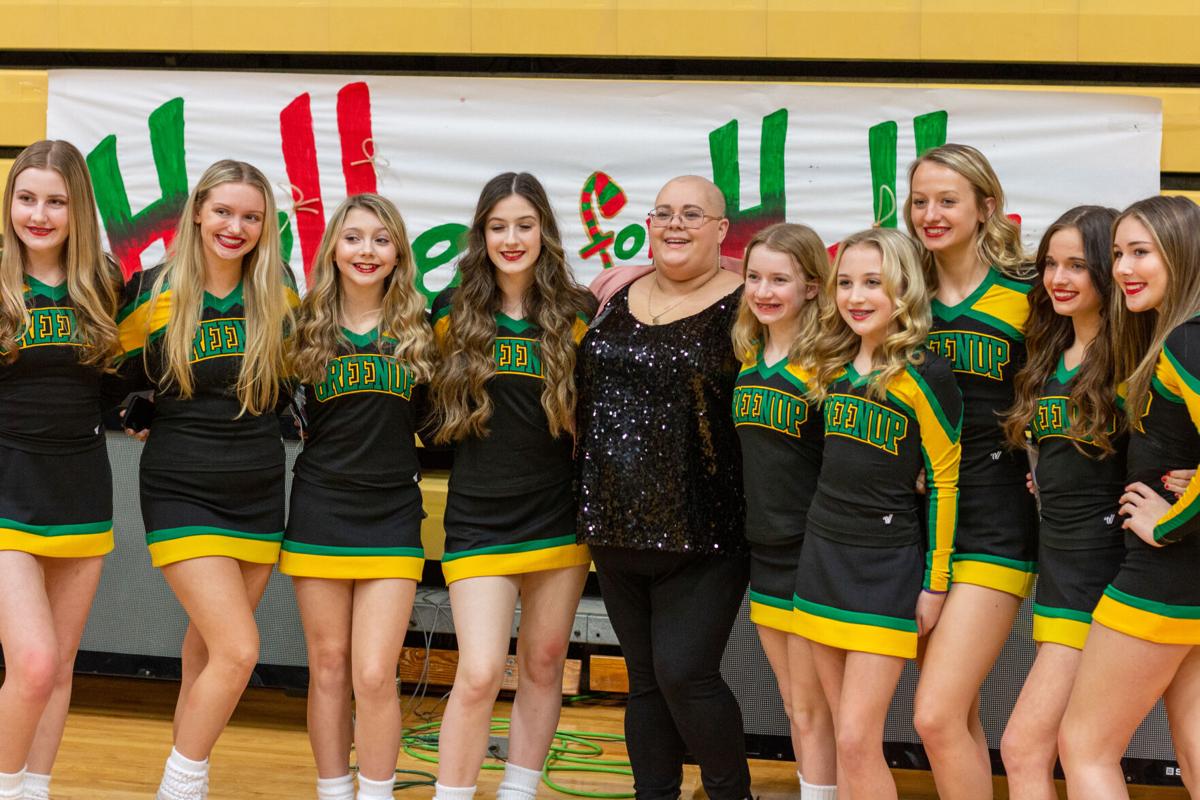 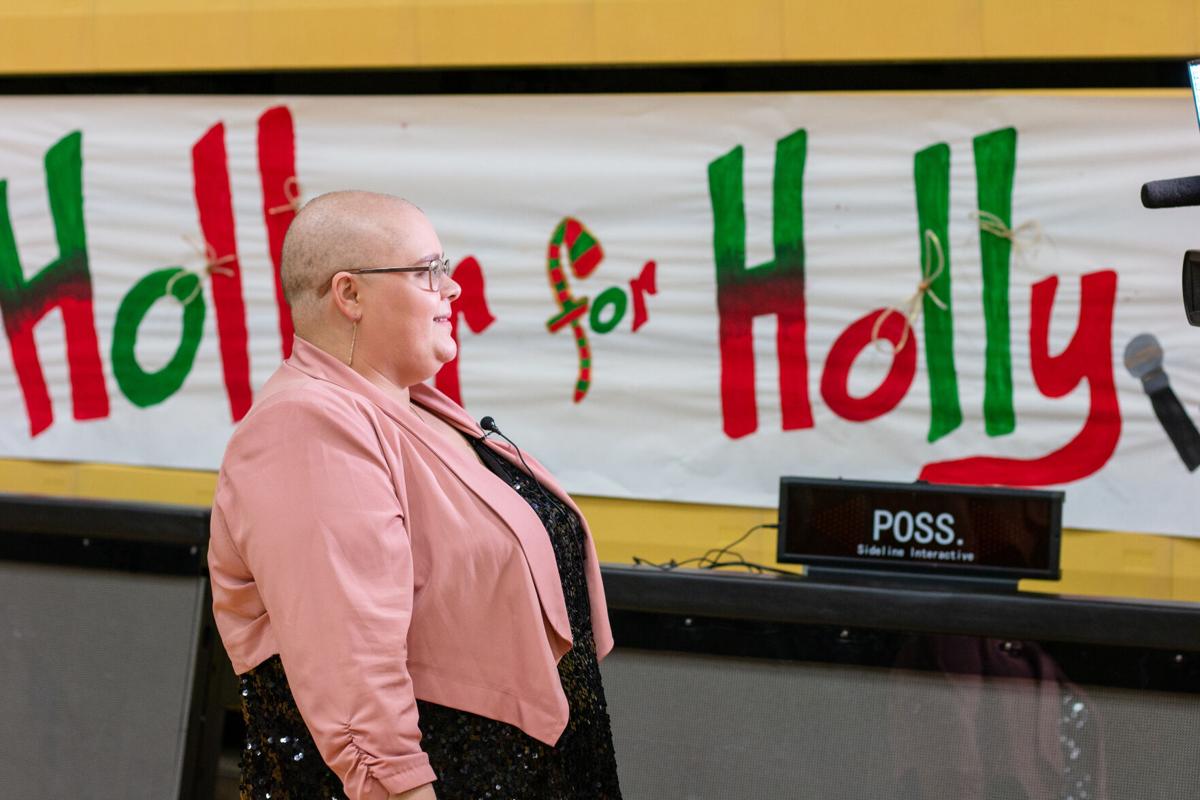 Holly Forbes returns to Greenup County after success on The Voice. Emily Porter | The Daily Independent 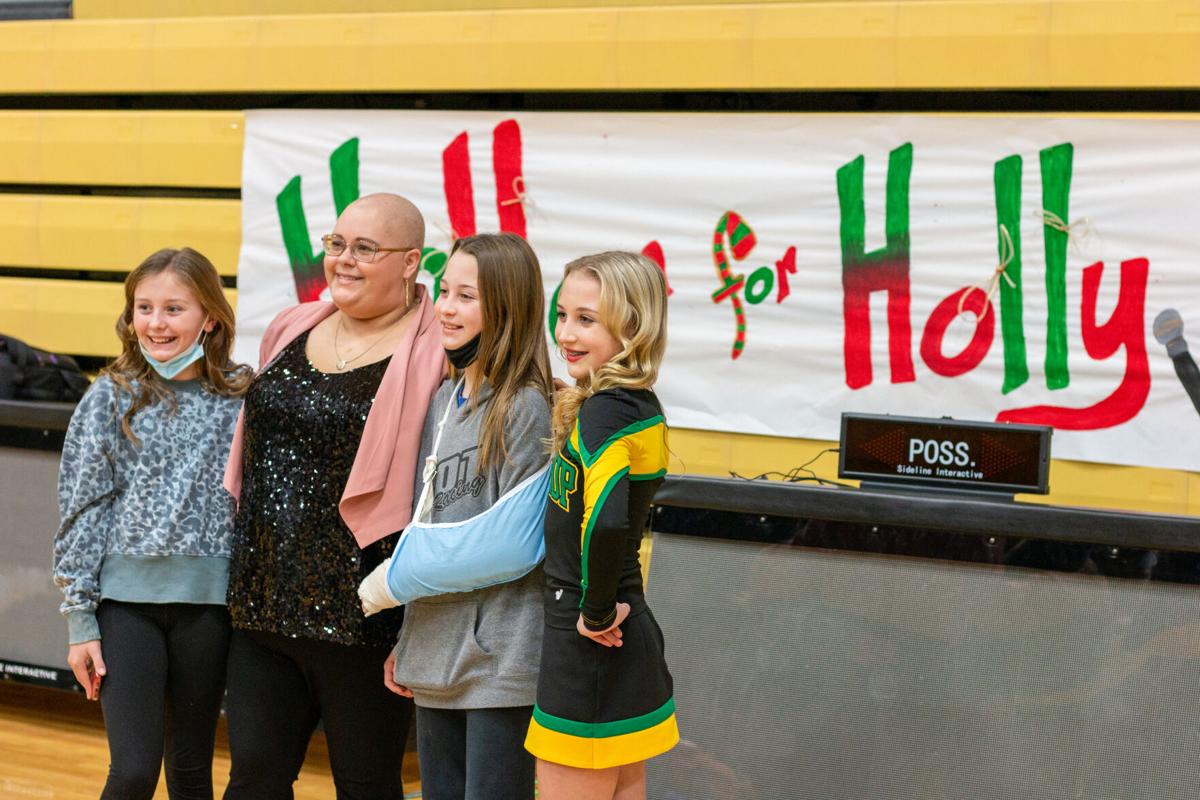 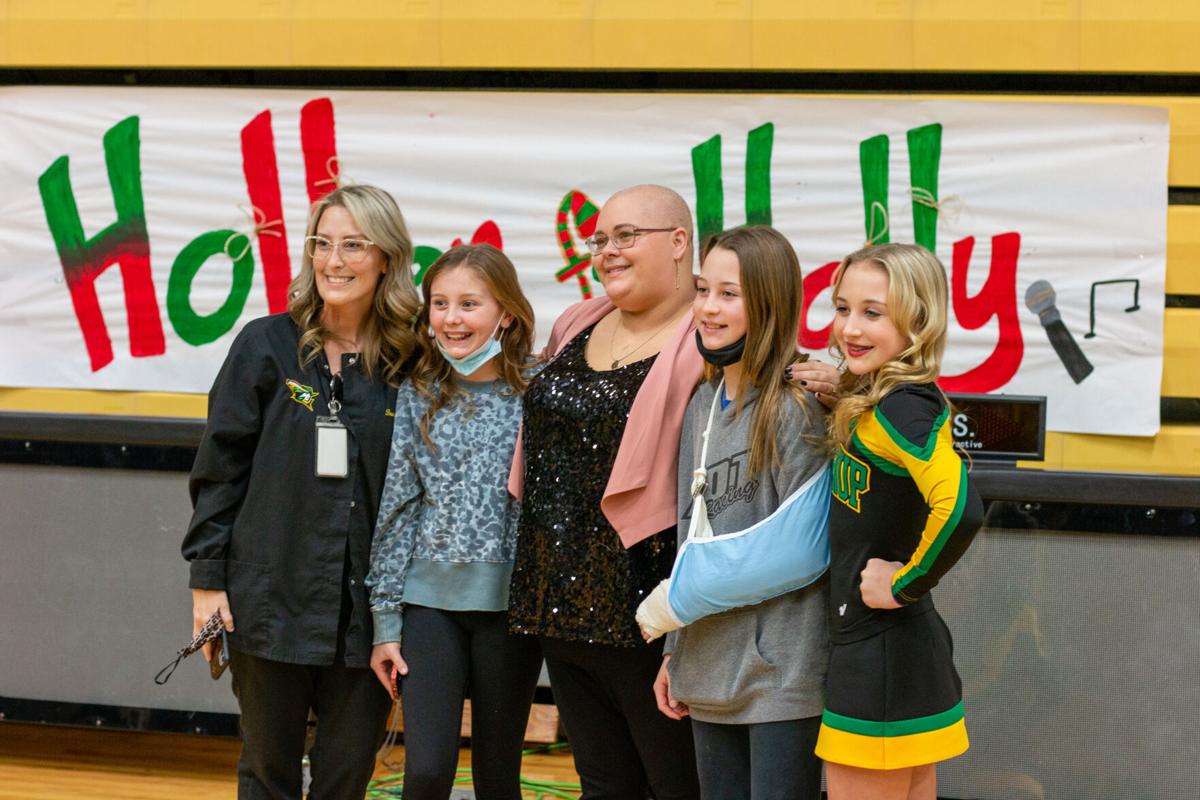 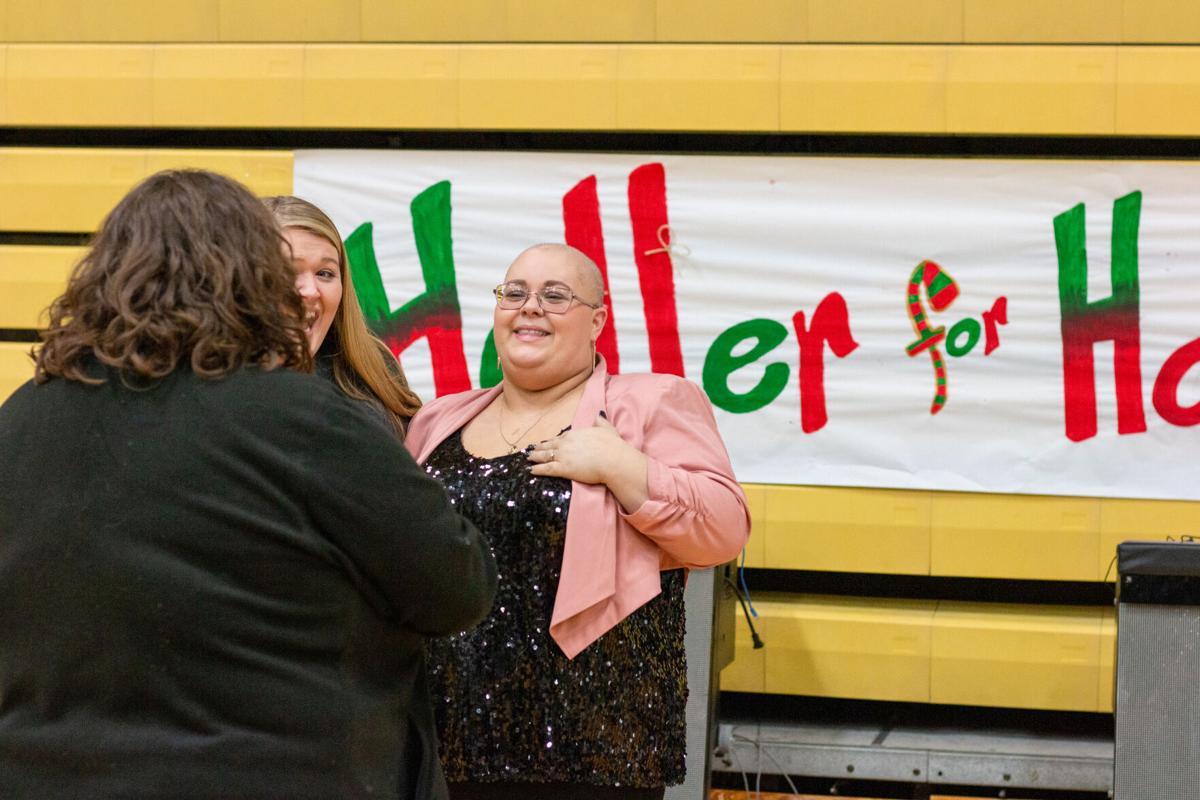 Holly Forbes greets and chats with everyone who came to her homecoming celebration in Greenup County. Emily Porter | The Daily Independent 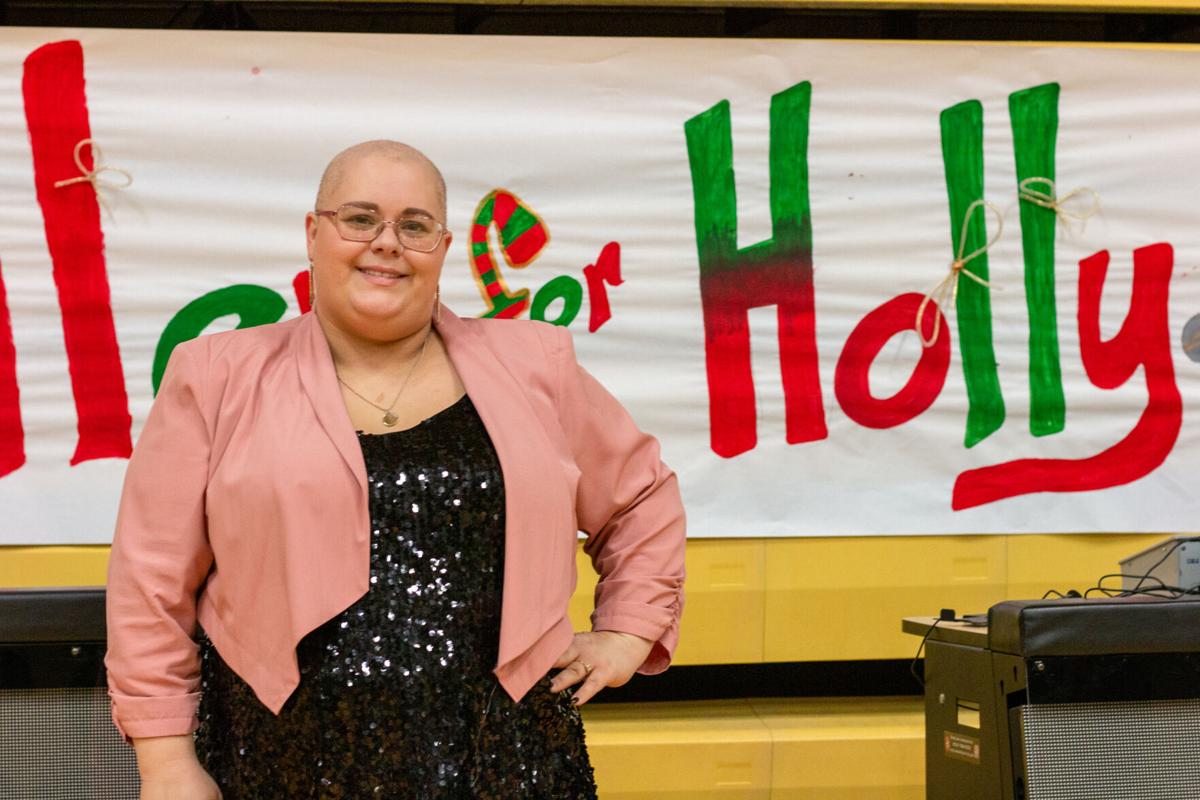 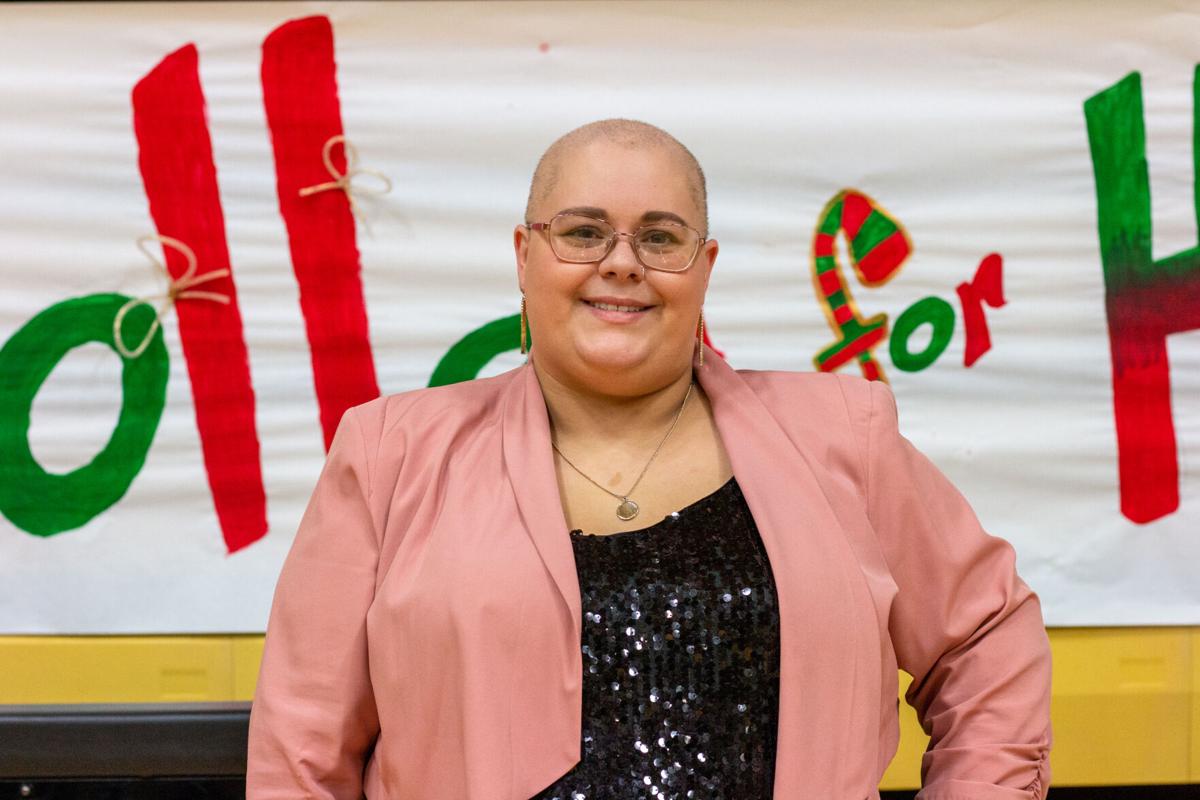 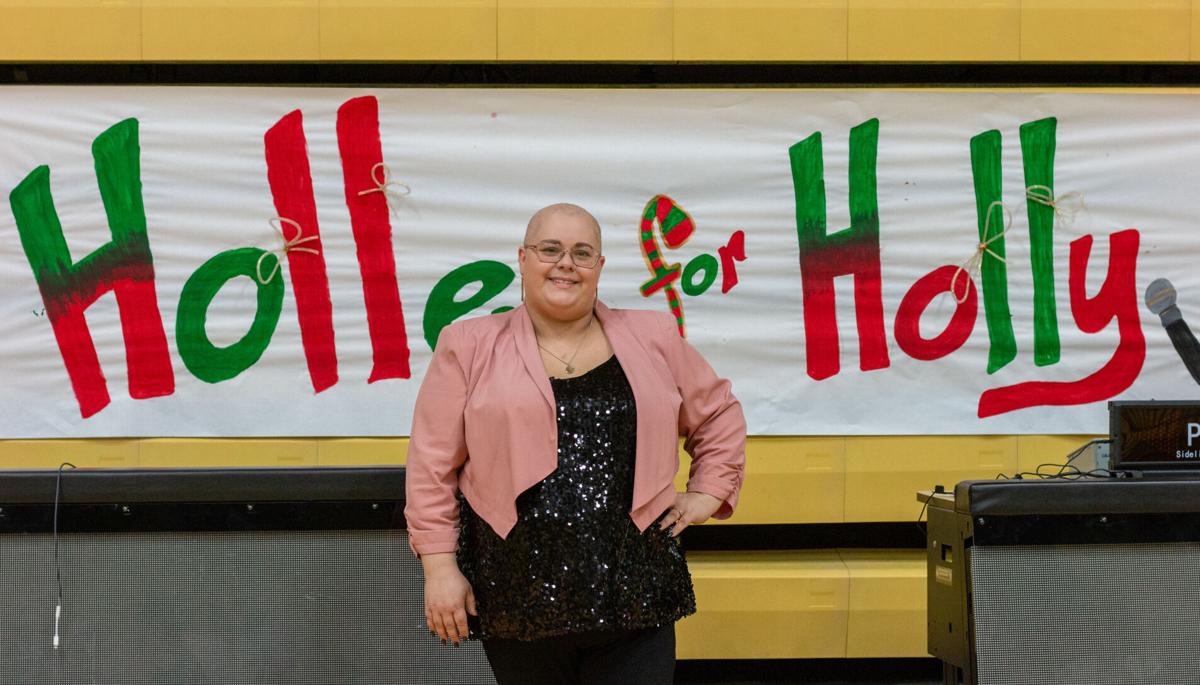 Holly Forbes sits with her family and recieves a proclamation to make Dec. 6 Holly Forbes Day in Argillite. Emily Porter | The Daily Independent

Holly forbes sits with her family and talks to the crowd at a homecoming celebration in Greenup. Emily Porter | The Daily Independent

Holly Forbes returns to Greenup County after success on The Voice. Emily Porter | The Daily Independent

Holly Forbes greets and chats with everyone who came to her homecoming celebration in Greenup County. Emily Porter | The Daily Independent

LLOYD Holly Forbes is back from The Voice.

A plethora of lights and sirens pierced through the quiet early evening Monday. A host of first response vehicles surrounded the limousine that carried Holly Forbes and her family to Greenup County High School.

As Forbes stepped into the gymnasium, as “Rocket Man” played out over the speakers. Forbes was greeted with cheers and headed through a tunnel created by the Greenup County High School cheerleaders.

As an Argillite native, now residing in Catlettsburg, Forbes was honored by Mayor Lundie Meadows who named Dec. 6 in her honor.

Videos of former teachers played, as one recalled the time Forbes came to school dressed as Elton John and gave a presentation on John. She sang one of his songs then as well.

Forbes brought a rendition of “Rocket Man” to the blind auditions that resulted in a four chair turn from the coaches on The Voice. Kelly Clarkson, John Legend and Ariana Grande all simultaneously turned and Blake Shelton turned one more line into the song.

The video of the audition now has more than 2.2 million views on YouTube.

Forbes chose Team Kelly and worked with Clarkson through the battle rounds. In the Knockout round, Clarkson made a tough decision to choose A Girl Named Tom over Forbes. While she didn’t win the round, Forbes wasn’t stressed.

“Pretty much as soon as we walked on stage, John was like, ‘I’m stealing one of you guys,’” Forbes recalled. “In that moment, I didn’t really feel like some of the fear that other people had, because I just kind of like knew that it was probably coming, because what he said, but yeah, it was crazy and just made me very happy that they both wanted to continue with me.”

Both Legend and Grande attempted to steal Forbes, but Forbes went with Grande. Forbes mentioned her daughter Violet’s love for the artist during her blind audition, then seeing Grande around the show, Forbes was intrigued to work with her.

“The more I went through the show, I learned and got to know her,” said Forbes. “I just knew that she was a great person and wanted to work with her because she was very genuine.”

Forbes is staying true to Team Ariana, cheering for Jim and Sasha as the final episodes wrap up in the next two weeks, but she said she’s really rooting for everyone.

“They are all so talented and I wish them the best,” said Forbes.

Forbes shared that the contestants were all in a hotel in Los Angeles for months and they became as close as family. She was especially close to Katie Rae, Shadale and Jeremy Rosado. Forbes and Rosado were both eliminated the same night.

“We’re all planning to make music together,” said Forbes. The contestants hope to perform shows and record together in the future.

The quick friends made by Forbes is no shocker to her dad, Barry Forbes.

“The good thing about Holly is she’s a social butterfly,” said Barry Forbes. “So she made close friends almost immediately when she was out there and that really helped her, you know, being away from home.”

Barry shared that her friends and family rallied behind her fiancé, Seth Carey, and their children, Violet and Oliver. Barry said it’s the thing they could do from Kentucky to help give her the peace that everything was more than taken care of back home.

Holly’s ability to make friends is something Barry admires in his daughter.

“When she makes friends, she makes incredible friends, friends will drop anything,” Barry Forbes said. “And be there for your friends because that’s what she is.”

Forbes is back home and gearing up for what comes next. She will head out on tour with Landau Eugene Murphy Jr., a past winner of America’s Got Talent. The Home for the Holidays Tour will stop in venues across West Virginia. Information and tickets can be found at landaumurphyjr.com.

Following the tour, Forbes will present a New Year’s Eve show at the Paramount Arts Center. Carey will join her on stage in the band.

“That’s always been a dream of hers and ours to be able to play the Paramount,” said Carey.

“It’s gonna be so great to be able to play with him at the Paramount and, you know, ring in the new year together with our new dreams that we’ve accomplished and looking forward to the future,” said Forbes.

Also in the future for the couple is recording original music, and getting married.

Forbes pointed to her fiancé Monday night as a great writer when asked by the crowd about an album. Carey said the two have had original music for some time, but haven’t had the opportunity to make it happen just yet. The two are working to help Forbes capitalize on her success as soon as possible.

Carey said they hope to create music that has an impact, as the two have used music to get through the difficulties they have faced in life.

“I’m just excited for the future,” said Carey. “I’m hoping we can just make the most beautiful music we can make and people will enjoy it. Because music for me and Holly, it’s helped us go through some really tough times. And I think it’s like that for a lot of people. So if we can make one person’s day better, like one person feel better, then mission accomplished.”

Forbes has been working for many years at her craft. Her family and friends always saw that special spark that resulted in the four chair turn and the judges’ jaws dropping. Now others are witnessing that greatness.

“I’ve known since the first time I every heard her sing that she had this in her and I’m just happy everybody else is giving her the recognition I’ve always felt like she deserved,” said Carey. “I will say when she got pregnant with Oliver last year and the lockdown happened, she was in there every day practicing her craft, honing it. She definitely leveled up last year.”

The extra year of practices aided Holly.  Barry Forbes said he believes it was meant to happen after she had Oliver.

“I’ve known from ever since she was about 9 years old that she was different as far as singing ability,” said Barry. “She has grown as an artist, you know, she’s tried to get on different shows.”

Barry Forbes recalled the first audition for America’s Got Talent and the lessons learned about the process on the trip.

Forbes tried out for The Voice several times before making it, but never gave up.

“She never got disheartened, she was never disappointed,” said Barry. “I think that’s a big part of who she is.”

Her dad explained that the “no” wasn’t absolute, just a “not now.”

“Then Oliver came along and I think things had to fall in line, you know, Oliver had to come … when the time came, it came bigger than she thought it ever would you know? So it was worth the wait. The four chair turn was unbelievable,” he said.

For Forbes, her biggest lesson on the show musically was making connections with other musicians and people. Personally, she learned so much about herself.

“Just learning who I was as an artist and to stand up for myself and who I wanted to be as an artist,” said Forbes.

Carey said Grande has had an influence on how Forbes performs and her ability to emote.

Grande called her “brilliant” while Blake Shelton declared she should have been in the top five — he thought so all along. The coaches all consistently complimented Forbes, her voice, her talent and personality.

Grande said Forbes has an “infectious energy.” The first-season coach was tearful as Holly stood on stage in her final episode in the competition.

Forbes shared that energy with the crowd Monday night bringing some of her best performances from The Voice to Greenup County. She then spent an hour-plus meeting and talking with every person who came, taking photos and answering questions.

Forbes was asked about the work day, what Grande smelled like and about how she missed her kids.

This is Holly Forbes’ message to her family, friends and fans:

“Thank you guys for everything I couldn’t have done it without you know voting supporting me I’m just forever thankful I love everyone thank you so much.”