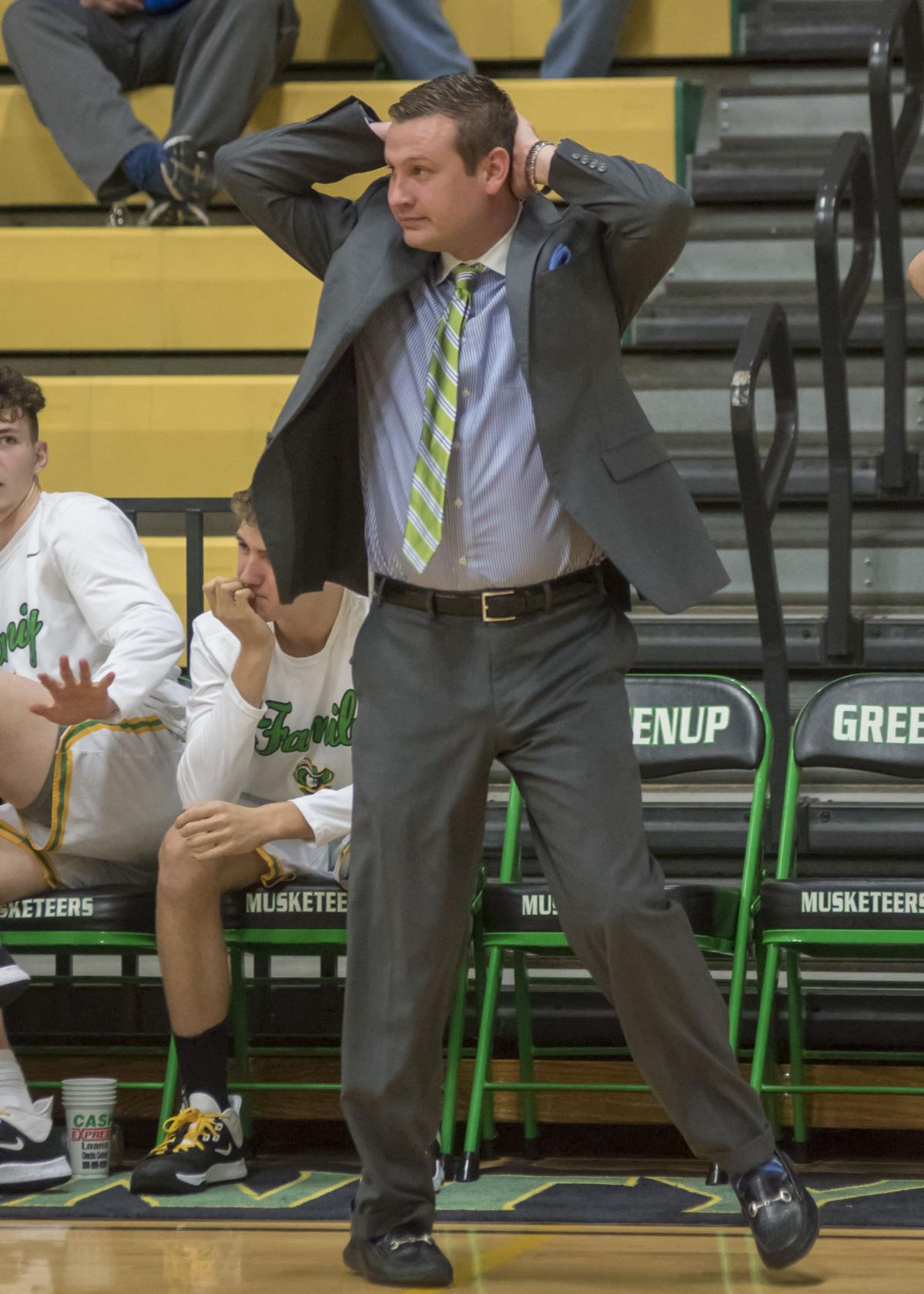 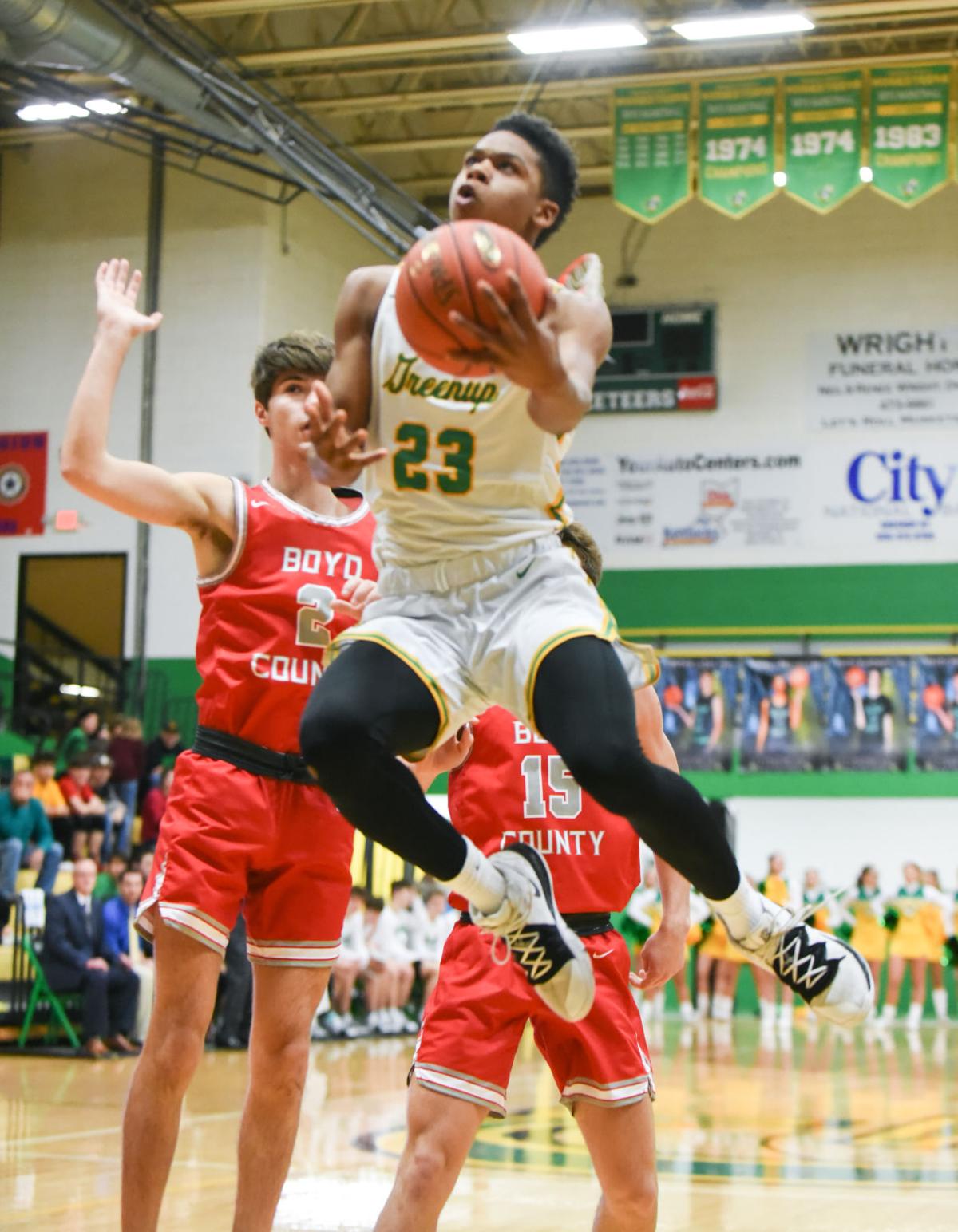 Greenup County's Rodrell Dryden jumps in the paint for a shot against Boyd County on Tuesday evening. MARTY CONLEY/ FOR THE DAILY INDEPENDENT

Greenup County's Rodrell Dryden jumps in the paint for a shot against Boyd County on Tuesday evening. MARTY CONLEY/ FOR THE DAILY INDEPENDENT

Greenup County boys basketball coach Robert Amis responded to allegations on Saturday that resulted in the suspensions of him and assistant coach Jeff Large for the remainder of the season — and a Musketeer player was ruled ineligible.

Greenup County Schools Superintendent Traysea Moresea announced the self-imposed actions in a press release on Friday as a result of a KHSAA draft report that the school received on Feb. 20.

Amis said he was given a separate letter by Moresea as he walked off the floor after Friday’s night game with Fleming County.

“I was stopped by the school superintendent and she said, ‘I need to talk to you, and I need to talk to coach Large.’ She pulled us in a side room, handed us these letters and said, you’re done, technically.”

The letter, supplied to The Daily Independent by Amis, informed the coach of his suspension.

“The report shows that that you allowed a student-athlete to compete in violation of Bylaw 6 Section 3d),” Moresea said in the letter. “(3) and (4) states that if a student participates in a non-school (AAU) team that is affiliated with or coached by a coach associated with that same sport and then that student transfers to the same team as that coach, they are not eligible.

“There is also overwhelming evidence to support that the student-athlete never had a bona fide change in residence,” she added, “with his entire family relocating with him.”

Amis disputes those claims. He confirms that senior Rod Dryden, a transfer from Woodford County, is the student-athlete who has been deemed ineligible. He further stated that Dryden was ruled eligible before the start of basketball practice and his address was confirmed by the necessary department at the high school after he moved to the area with his mother.

“To the best of my knowledge, he was ruled eligible around middle of October,” Amis said. “My assistant coach wasn’t hired until two weeks after that. I had one assistant leave the program to coach the sixth-grade team at McKell Middle School to coach his son. Honesty, I have no idea where the kid lives. I know it was in Ashland because I saw the paperwork. He was ruled eligible by KHSAA. His address was confirmed not once, but twice by the Greenup County Director of Pupil Personnel.”

“He’s played all year,” he added, “and it shocks me that on the last Friday of the regular season he gets deemed ineligible by the superintendent and myself and assistant coach Large are ruled ineligible and not allowed to coach in the postseason.”

Amis said he wasn’t given the opportunity to view the draft report from the KHSAA that was referenced in Moresea’s press release and in the separate letter he received from her.

“No, I have not but through representatives of the KHSAA, they did not rule him ineligible,” Amis said. “It was completely a decision by the school district.”

“For everyone asking about what happened, I couldn’t tell you,” Dryden tweeted. “I do not know why I’ve been deemed ineligible, but I want to thank coach Amis for being the best basketball coach I’ve had. And I would love to say thank you to the Greenup families that was there for me. No. 23 out.”

“He’s handled like a complete gentleman,” Amis said of Dryden. “He was devastated. We are going to get to the bottom of this. He wants justice for himself. He and his mother have cooperated in every capacity with the KHSAA.

“My kids are completely floored right now. They feel unappreciated.”

Amis said he is still unsure of his status as Greenup County boys basketball coach. The letter he received from Moresea informed him of his suspension but concluded with her stating, “We hope that you can learn from this incident and wish you the best in your future endeavors.”

“I want to be there,” Amis said, “but I’m interpreting that as I am not going to be back.”