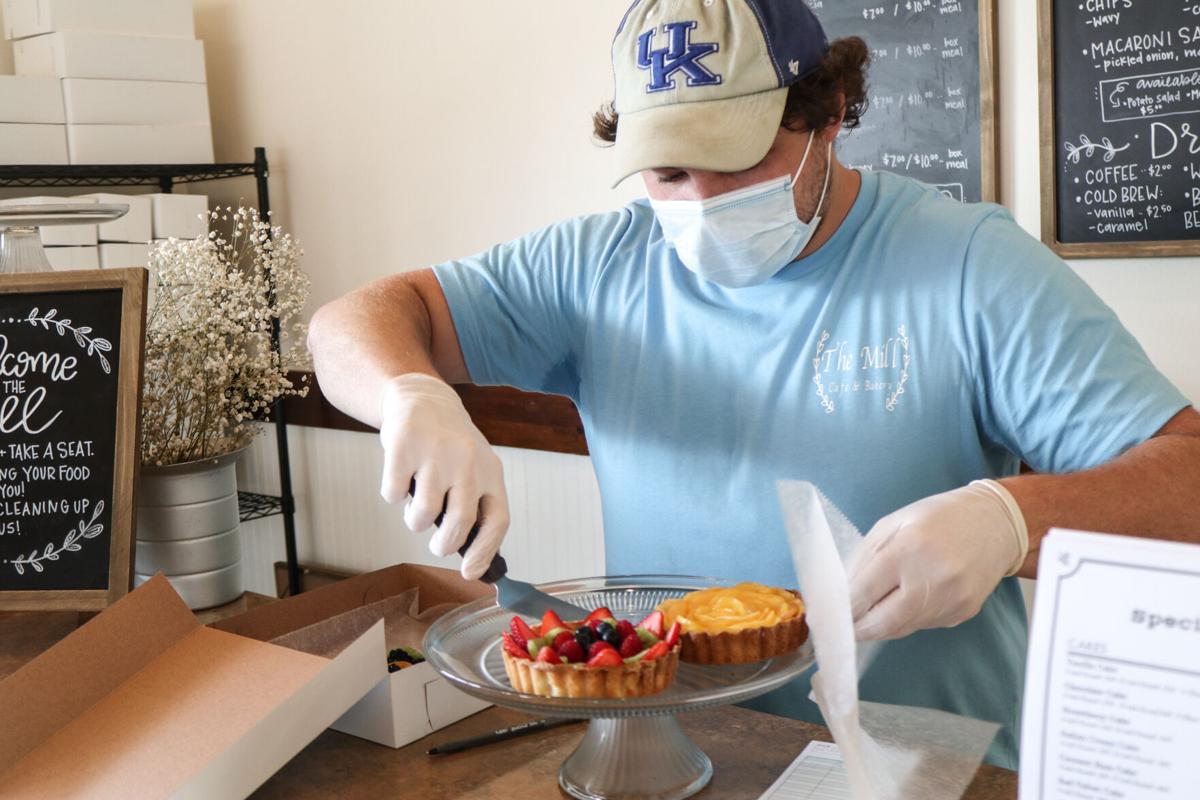 Matt Jones | The Daily Independent Nick Miller loads fruit tarts into a box for a customer during The Mill Cafe & Bakery’s ribbon cutting ceremony on Wednesday. 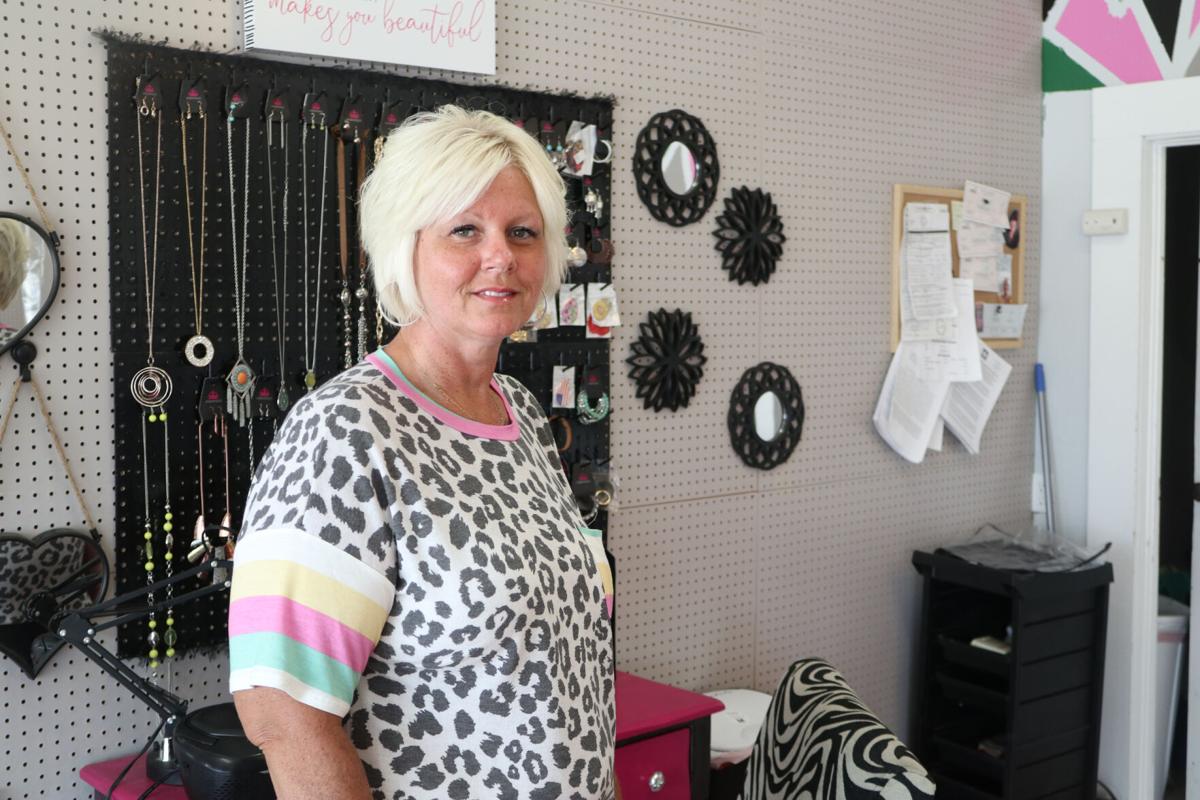 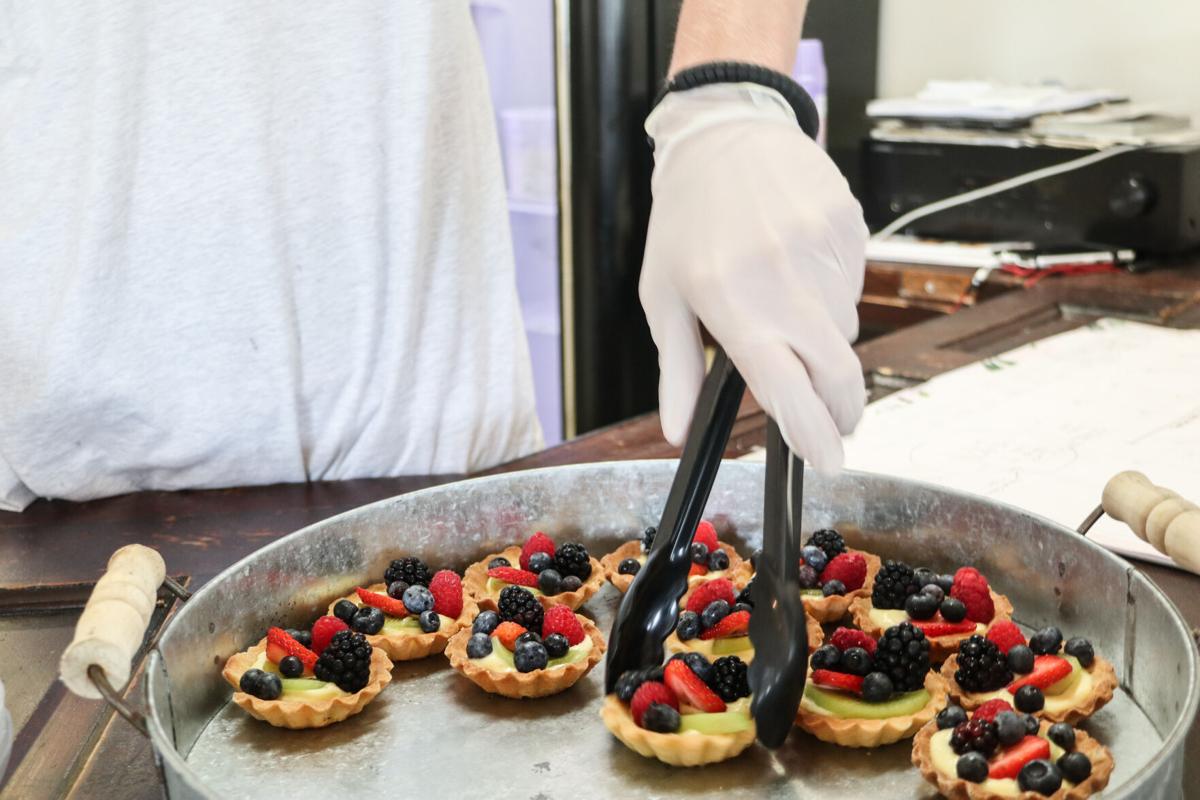 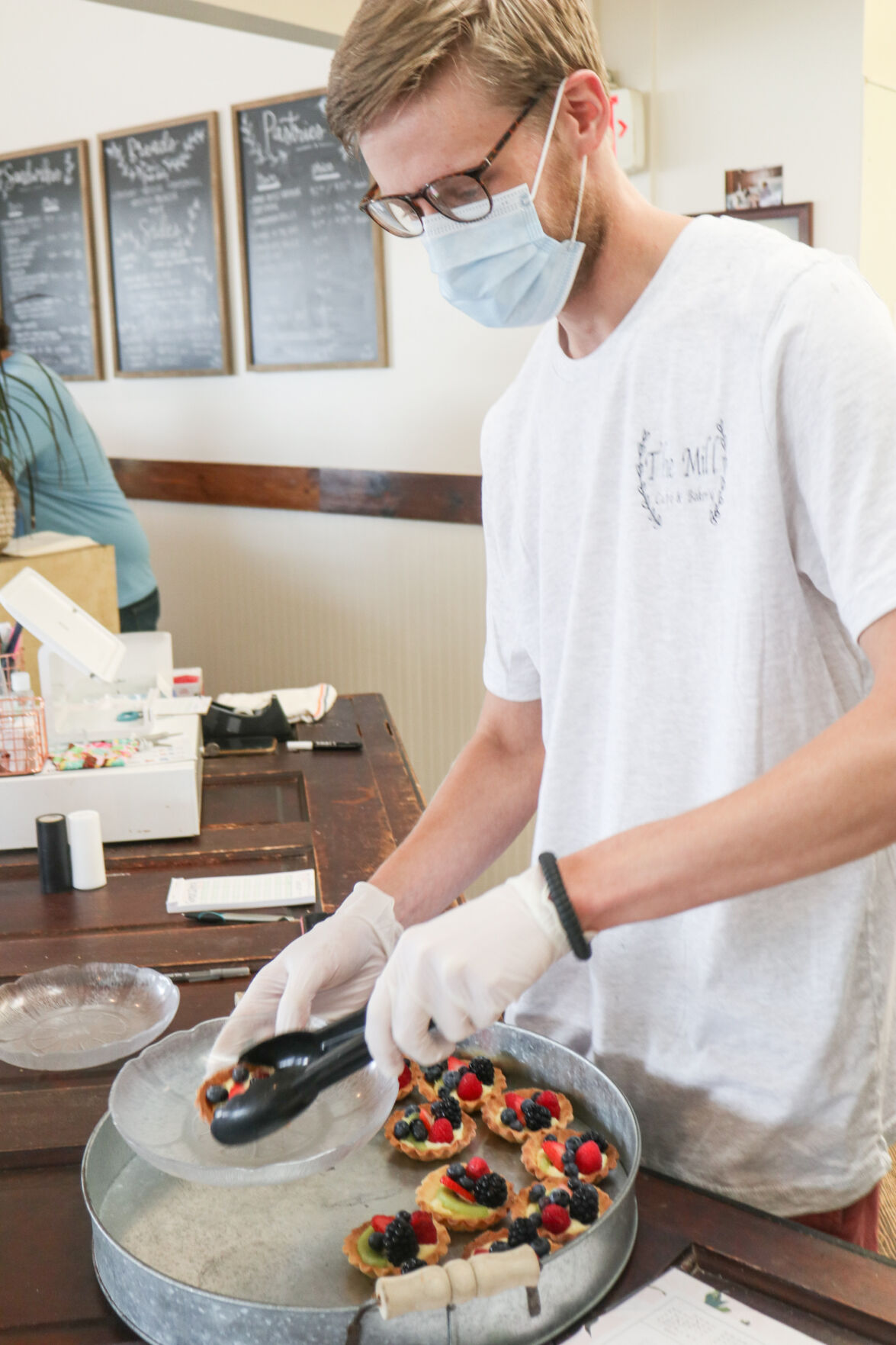 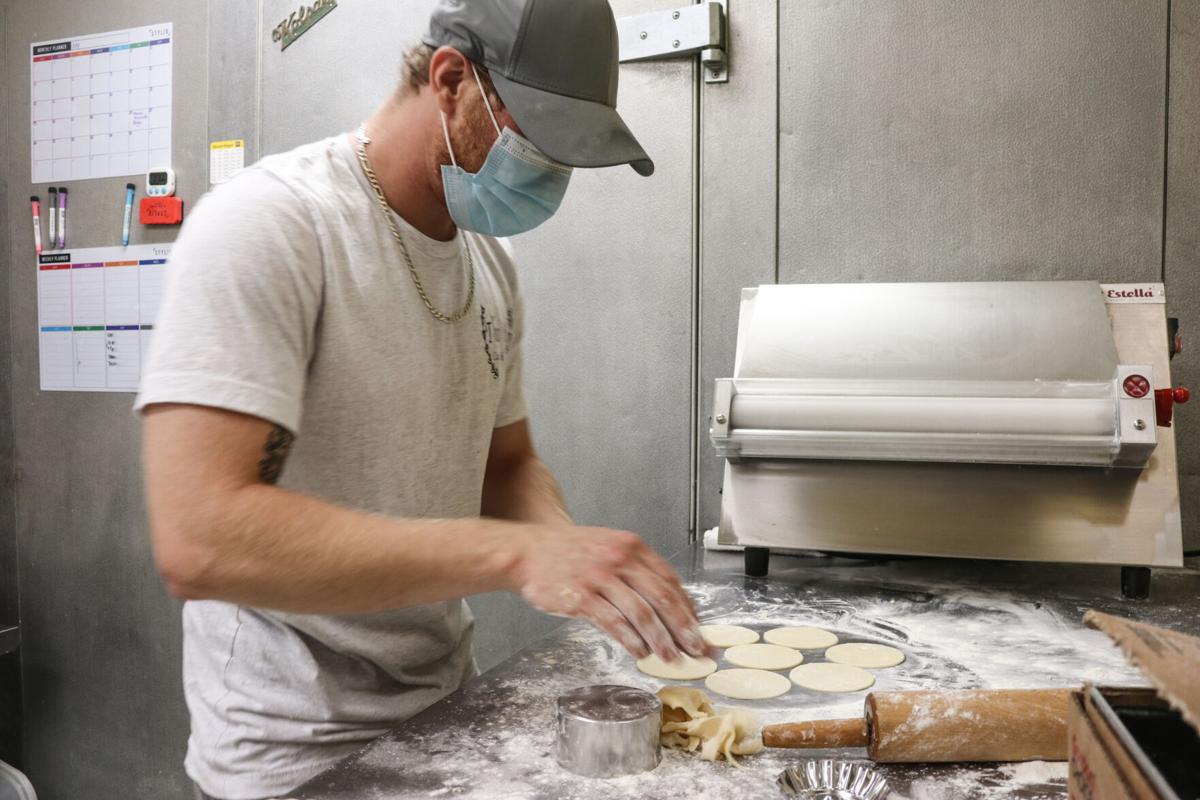 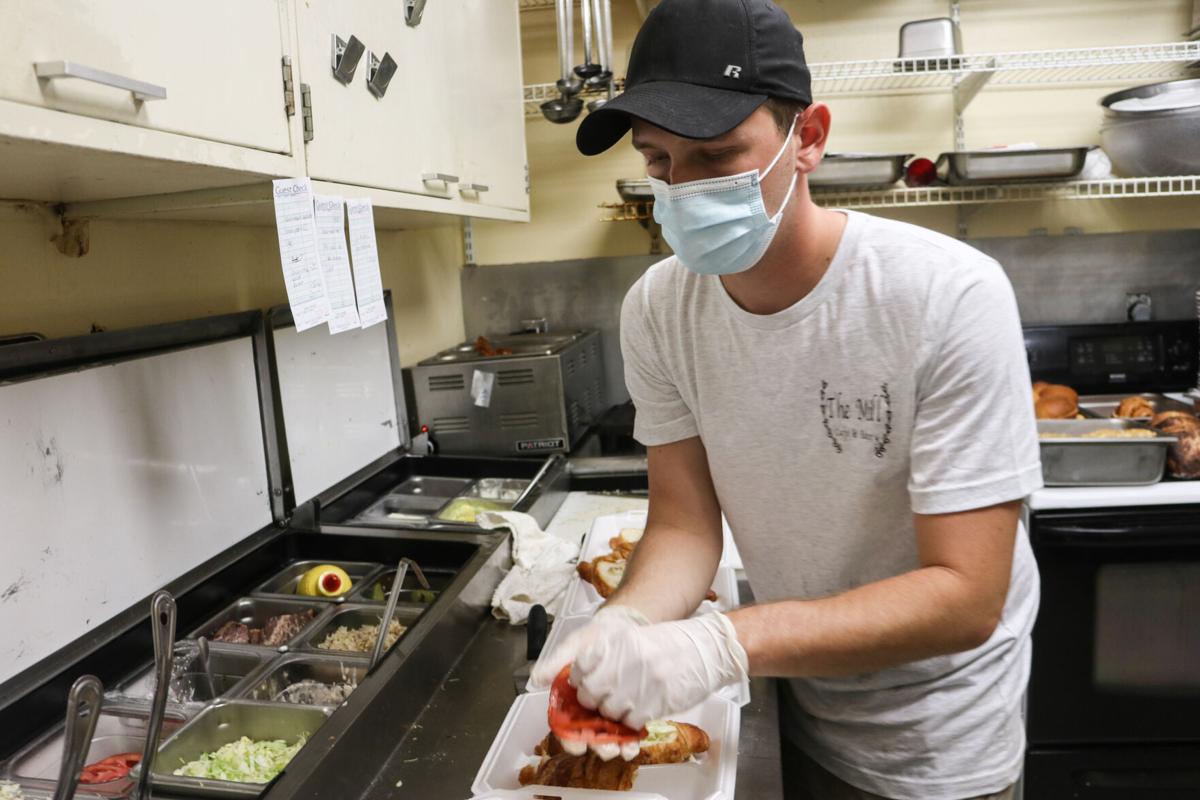 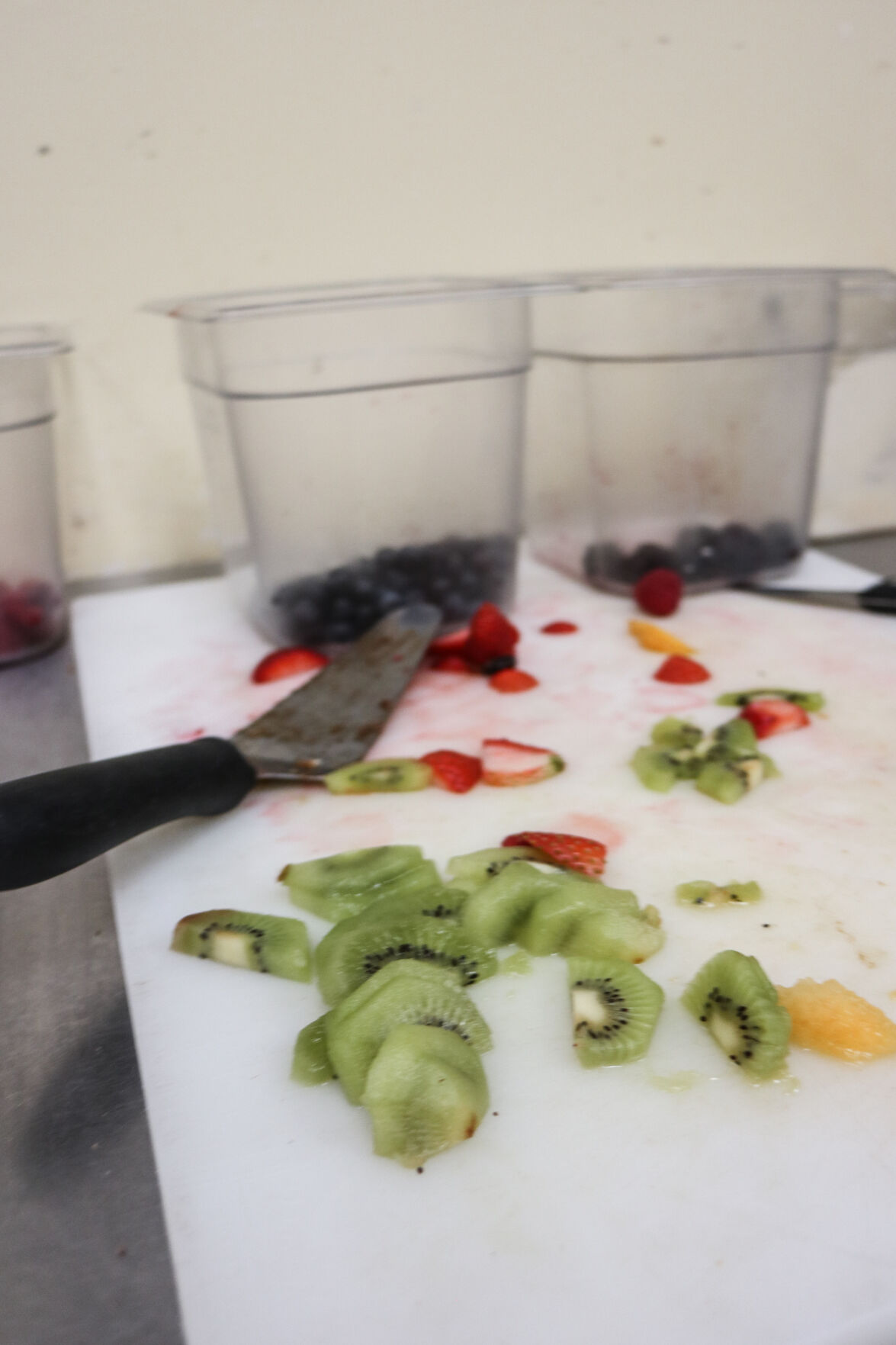 Matt Jones | The Daily Independent Fruit sits on a cutting board during the ribbon cutting at The Mill Cafe & Bakery in Ashland on Wednesday. 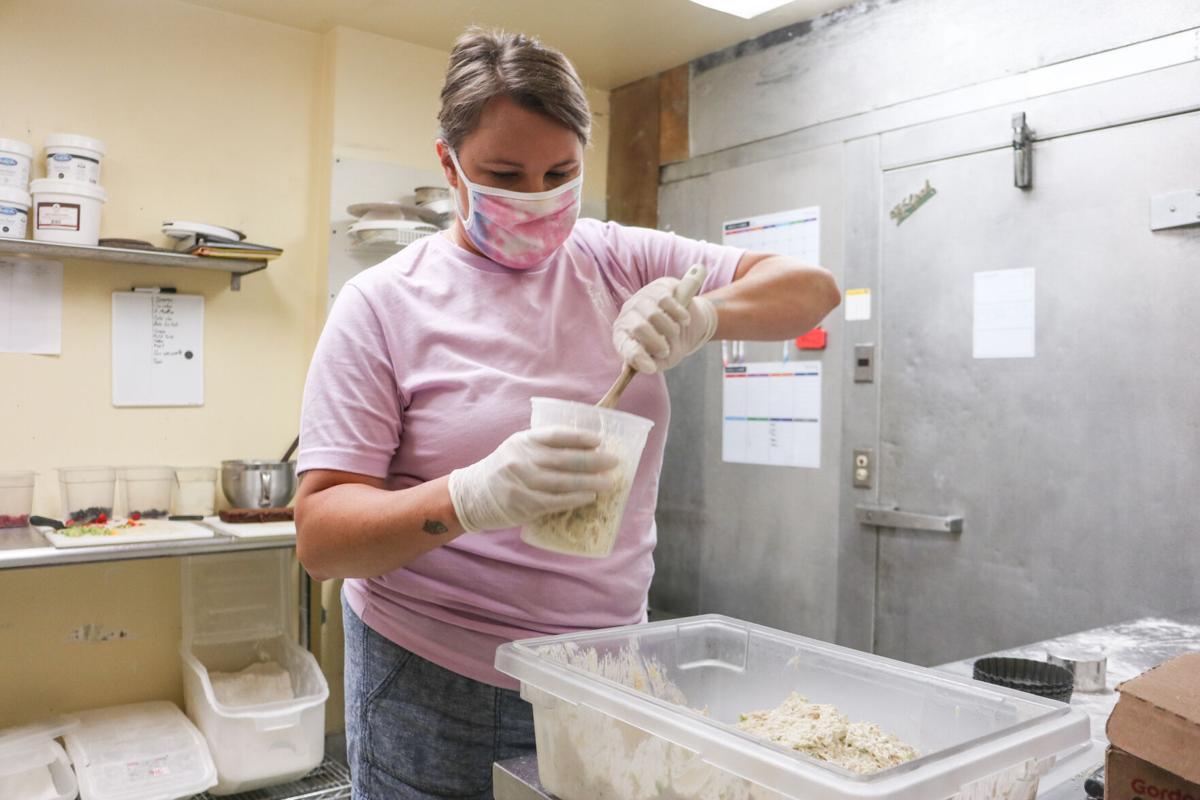 Matt Jones | The Daily Independent Owner Mikal Miller loads chicken salad into a to go container in the back of the house on Wednesday at The Mill Cafe & Bakery in Ashland. 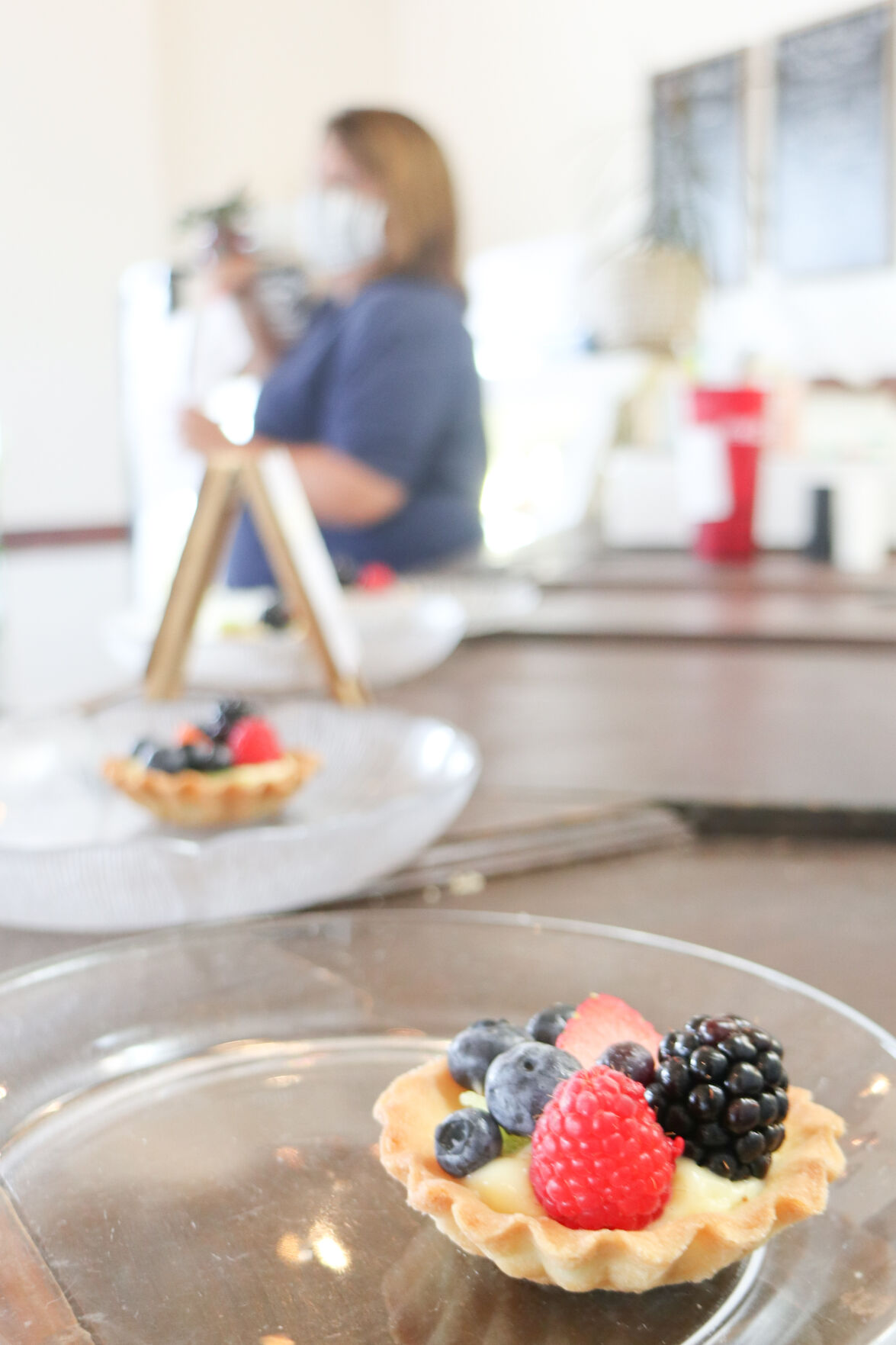 Matt Jones | The Daily Independent Mini fruit tarts sit on plates at the ribbon cutting at The MIll Cafe & Bakery on Wednesday.

Matt Jones | The Daily Independent Nick Miller loads fruit tarts into a box for a customer during The Mill Cafe & Bakery’s ribbon cutting ceremony on Wednesday.

Matt Jones | The Daily Independent Fruit sits on a cutting board during the ribbon cutting at The Mill Cafe & Bakery in Ashland on Wednesday.

Matt Jones | The Daily Independent Owner Mikal Miller loads chicken salad into a to go container in the back of the house on Wednesday at The Mill Cafe & Bakery in Ashland.

Matt Jones | The Daily Independent Mini fruit tarts sit on plates at the ribbon cutting at The MIll Cafe & Bakery on Wednesday.

ASHLAND It’s about half an hour before noon and two parties of diners are sitting at tables in The Mill Cafe & Bakery.

One is a family with a couple of young children. Across the room, two downtown workers chat over sandwiches on their lunch hour.

About 8 feet away from the family table there is a counter made from repurposed vintage doors. Joe Clark, the attendant behind the counter, is wearing a mask; he takes an order and puts a selection of tarts and brownies in a take-out box.

Another customer waits her turn 6 feet away, hoping the bakery display case won’t be depleted before she steps up to order.

By noon, the half-dozen tables spaced around the dining room all will be occupied and will stay that way for an hour or so, at least if it’s a typical day, according to Clark.

It’s an encouraging sight for owner Mikal Miller, who opened the cafe in April as the first wave of the COVID-19 pandemic was inching its way toward the Tri-State. From worrying about losing her life savings, which she had pumped into the new business, she has developed a degree of confidence that the cafe has staying power. “I don’t think there ever will be a time when I’ll ever stop worrying, but I definitely do think we’re going to make it,” she said.

About a block away from the cafe on the corner of Greenup Avenue and 15th Street, another new business is flexing its muscles and testing the appetite for premium frozen treats during a pandemic.

Richard Ritchie, the owner of Whit’s Frozen Custard in the 1500 block of Winchester Avenue, has staked a considerable investment on the collective sweet tooth of Ashlanders, and the expectation that a pandemic won’t stop them from indulging. Like Miller, he knew what he was getting into, because plans for the store were already in progress before the virus hit American shores.

Ritchie knew the odds, but couldn’t see backing out. “Once you make up your mind, you’ve got to follow through,” he said.

He opened July 20 after remodeling the first floor of the building once occupied by Nobil Shoes. In fact, when he remodeled, he designed the laminate flooring to leave uncovered the central part of the terrazo floor with the Nobil emblem. He also stripped away drywall to leave exposed brick walls.

Opening in the midst of a pandemic was more difficult because of health and safety issues, he said. He had hoped to open in early May, but the state shutdown put a crimp in that plan.

He also had hoped to capitalize on the summer festival season, but this year there were no Summer Motion crowds, will be no Poage Landing Days festivities and no First Friday to keep people downtown.

He is banking on the atmosphere to bring people into the shop and on the product — frozen custard is similar to ice cream and soft-serve desserts but denser and creamier. Franchises in other cities have a strong following.

“It’s a long-term investment. Downtown needs more businesses and Whit’s is a good start for that,” he said.

The virus-caused business slowdown may help him in a way, because Whit’s offers a leisure-time activity. “People have more time to do things like this and people are looking for things to look forward to. When things are bad, how can custard be bad?” he said.

The challenge for Miller was just to get her business off the ground, but she didn’t think she had any other options. It was open or run out of money and fold.

She started with carryout and curbside service only. Her employees met customers and took orders outside when the store was locked up during the shutdown.

She also launched a Facebook page months before opening and populated it with photos of tarts, cookies, bread and other delicacies. “People eat with their eyes. People couldn’t come in and see so that was important,” she said.

She also started with two key premises — that a small sale was better than no sale and that a happy customer would be a repeat customer. “We told anyone, if you want a cupcake, we’ll deliver it to you,” she said.

By the time she opened her doors to dining-room business, people were eager to come inside, both to see the changes in décor and to buy the pastries they had been seeing online.

Out on 29th Street, Shelly Adkins has opened a hair salon, another risky proposition during a pandemic. Adkins is an experienced business owner; she had owned and operated a salon for 25 years before health issues forced her to close. Following her recovery she had planned the new salon in the 2000 block of 29th Street, which she calls Just a Lil Tease, for some time, and when the pandemic led to salon shutdowns, she didn’t want to turn back. “I just decided to go ahead and take a run at it. It’s a chance you have to take,” she said. She opened June 1.

To make it work, she and her two stylists have to be extra accommodating to their clients, and that includes making sure the shop is safe. That means sanitizing everything they touch and wearing masks.

Adkins caught a break when a nearby shop went out of business and that drove clients her way. She is taking new clients daily.

She worries about another shutdown but not too much. She will handle it if it happens. “We’ll think of something,” she said.