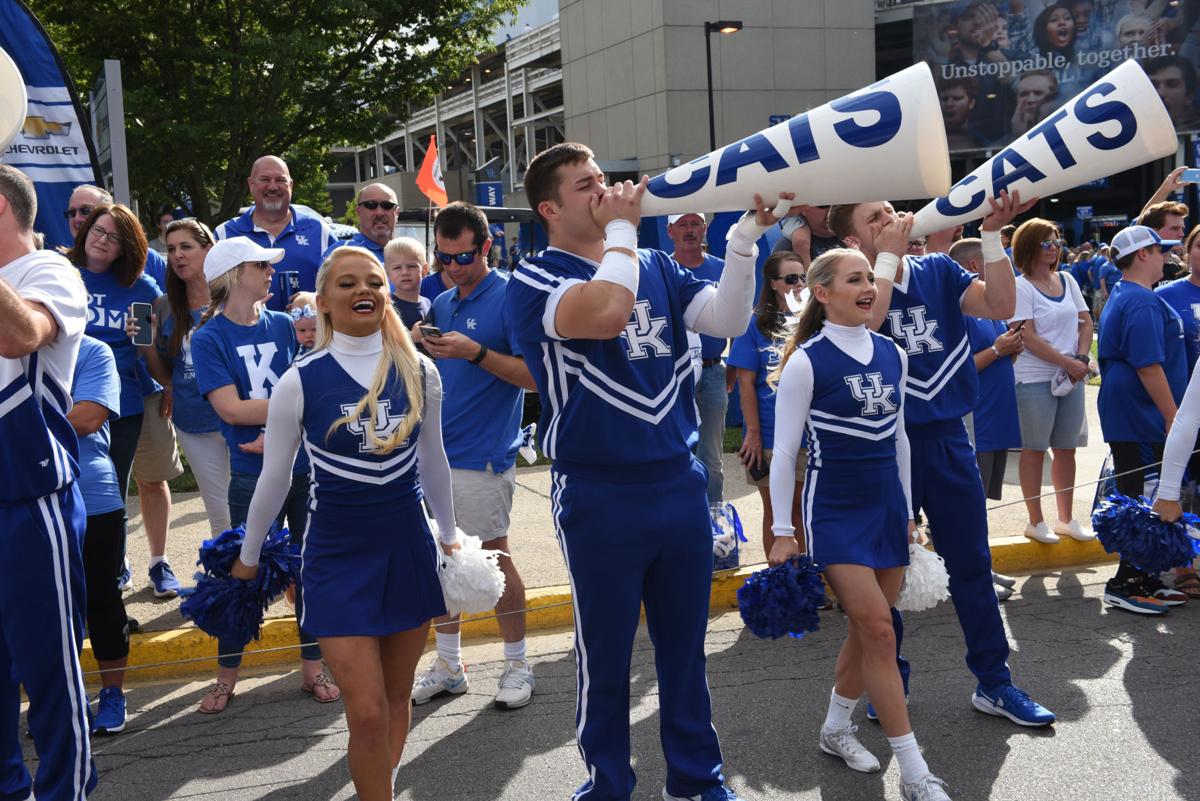 Kentucky cheerleaders get the crowd excited before a football game last season. DON MCREYNOLDS | FOR THE DAILY INDEPENDENT 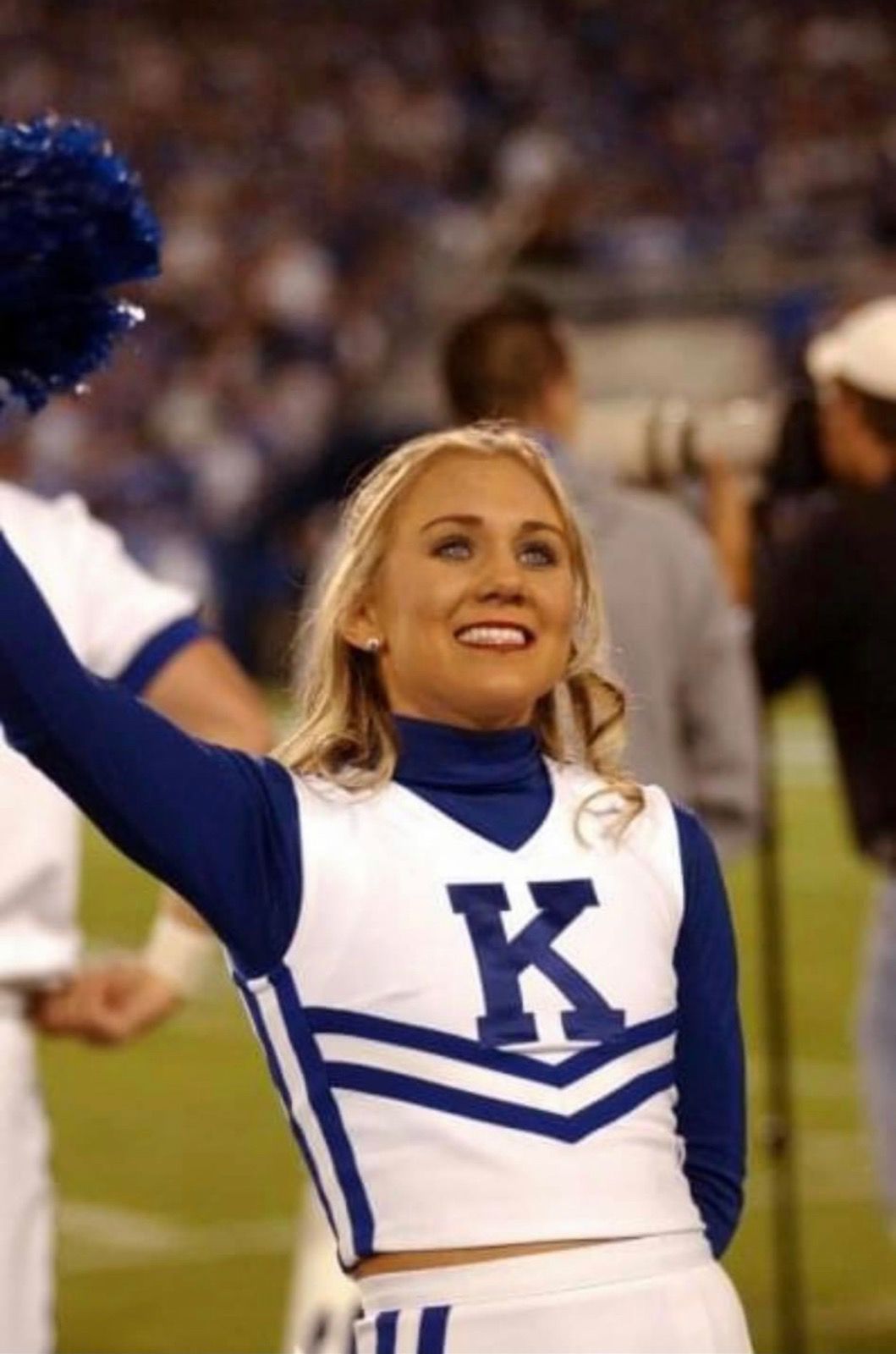 Emily (Sergent) Borders cheers on the Wildcats in 2007. 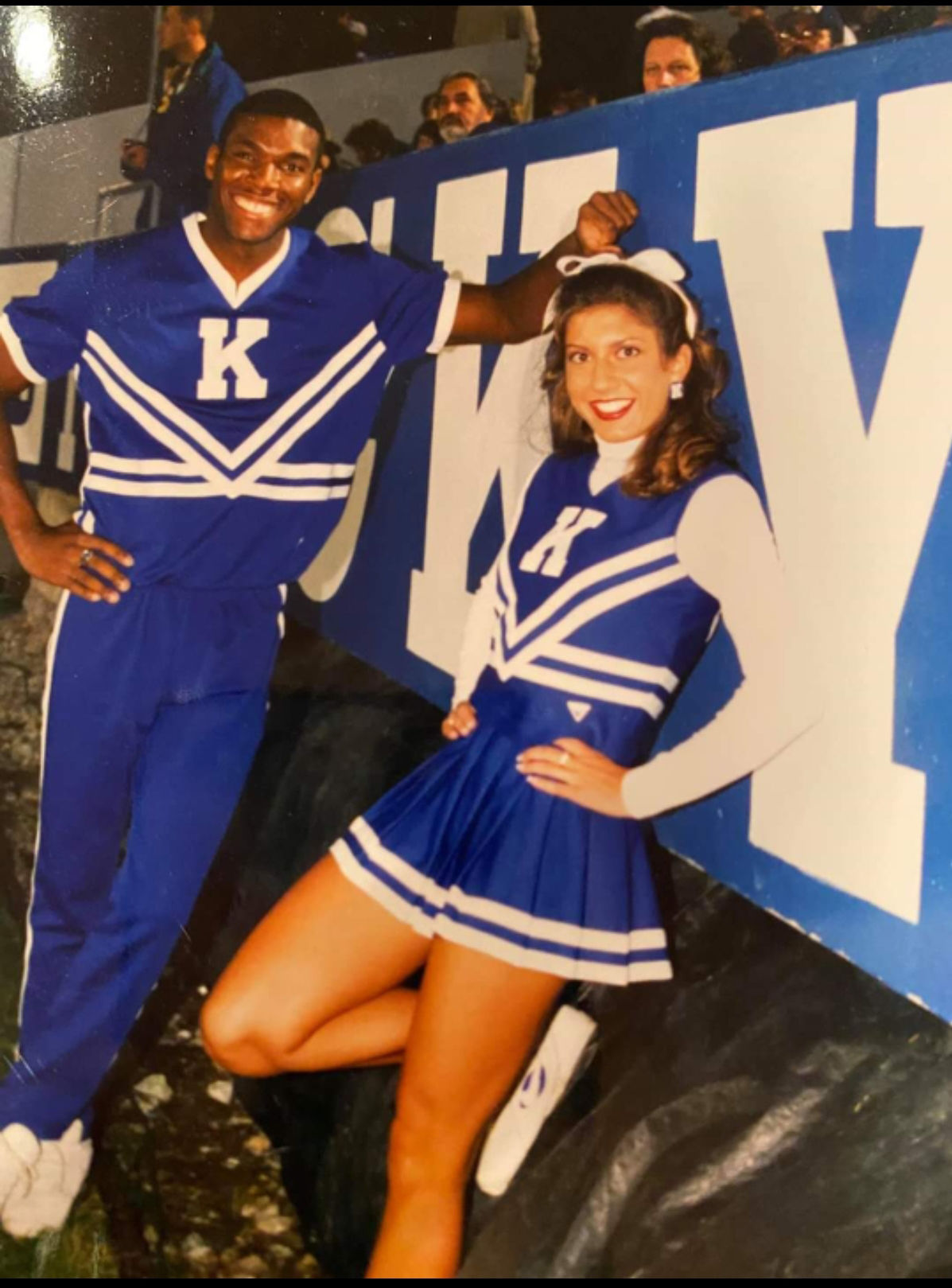 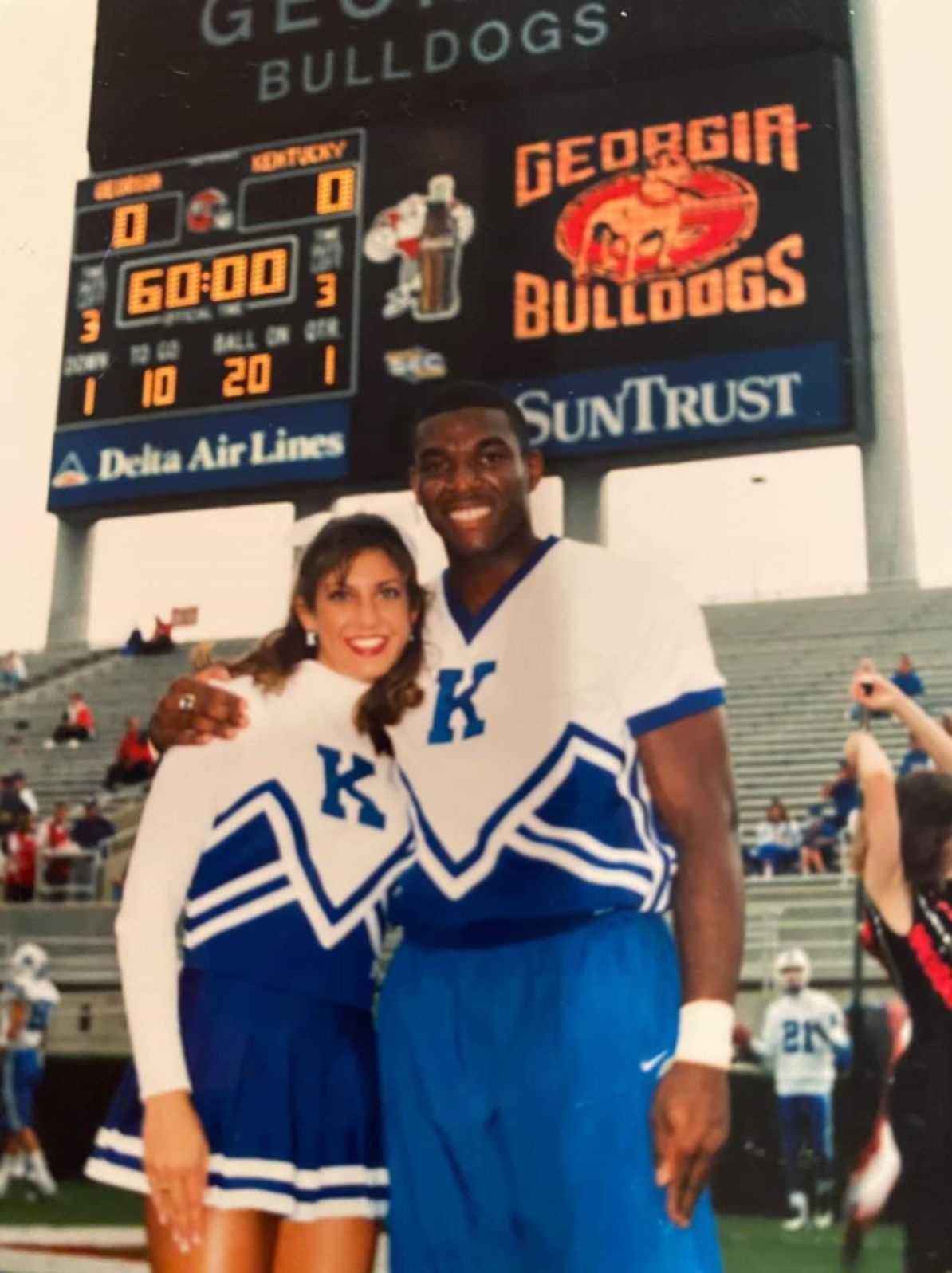 Kelli Long Elkins and Jomo Thompson smile for a photo prior to a Kentucky football game against Georgia. 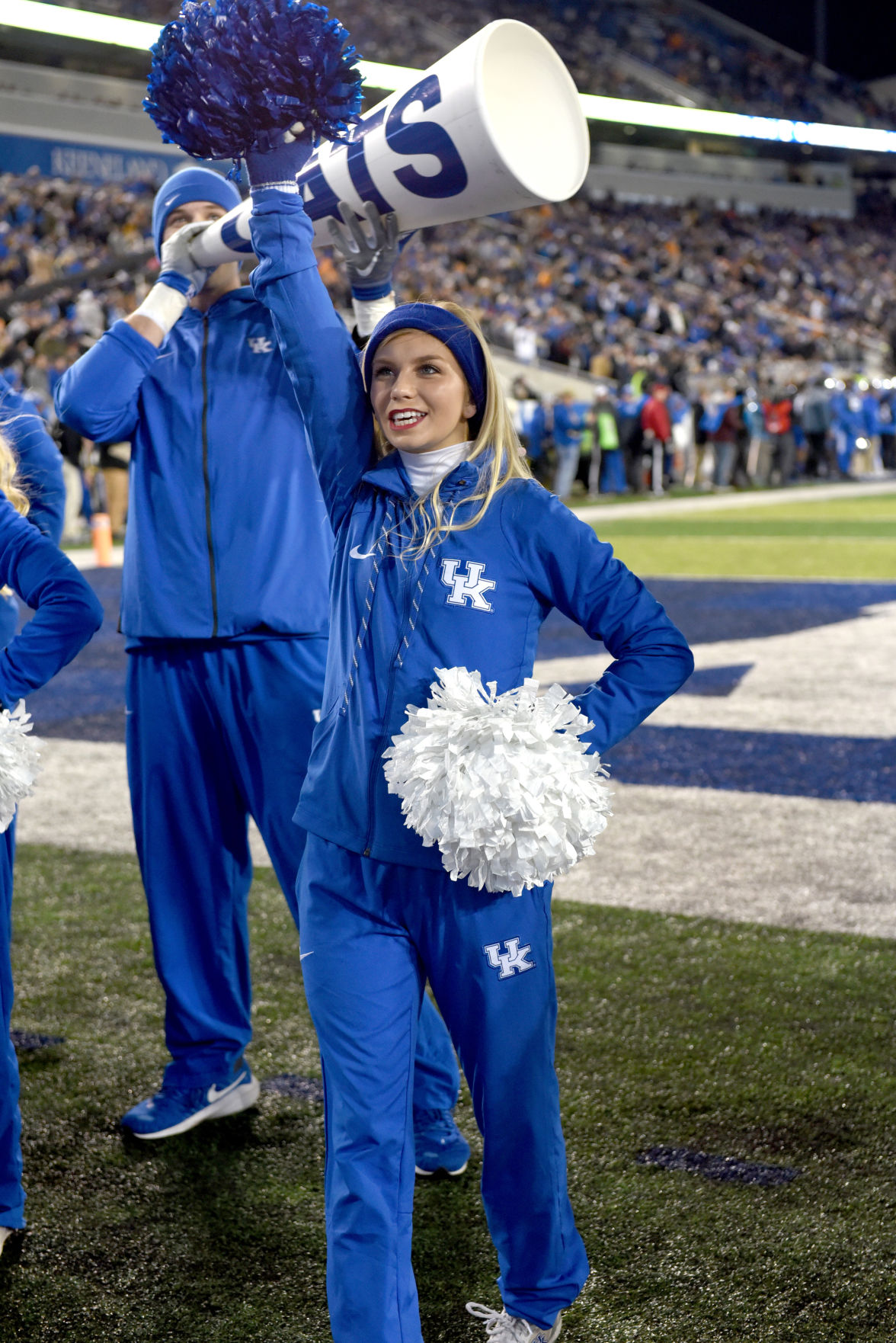 University of Kentucky cheerleaders fire up the crowd during the Wildcats' game against Tennessee last fall. DON MCREYNOLDS | FOR THE DAILY INDEPENDENT 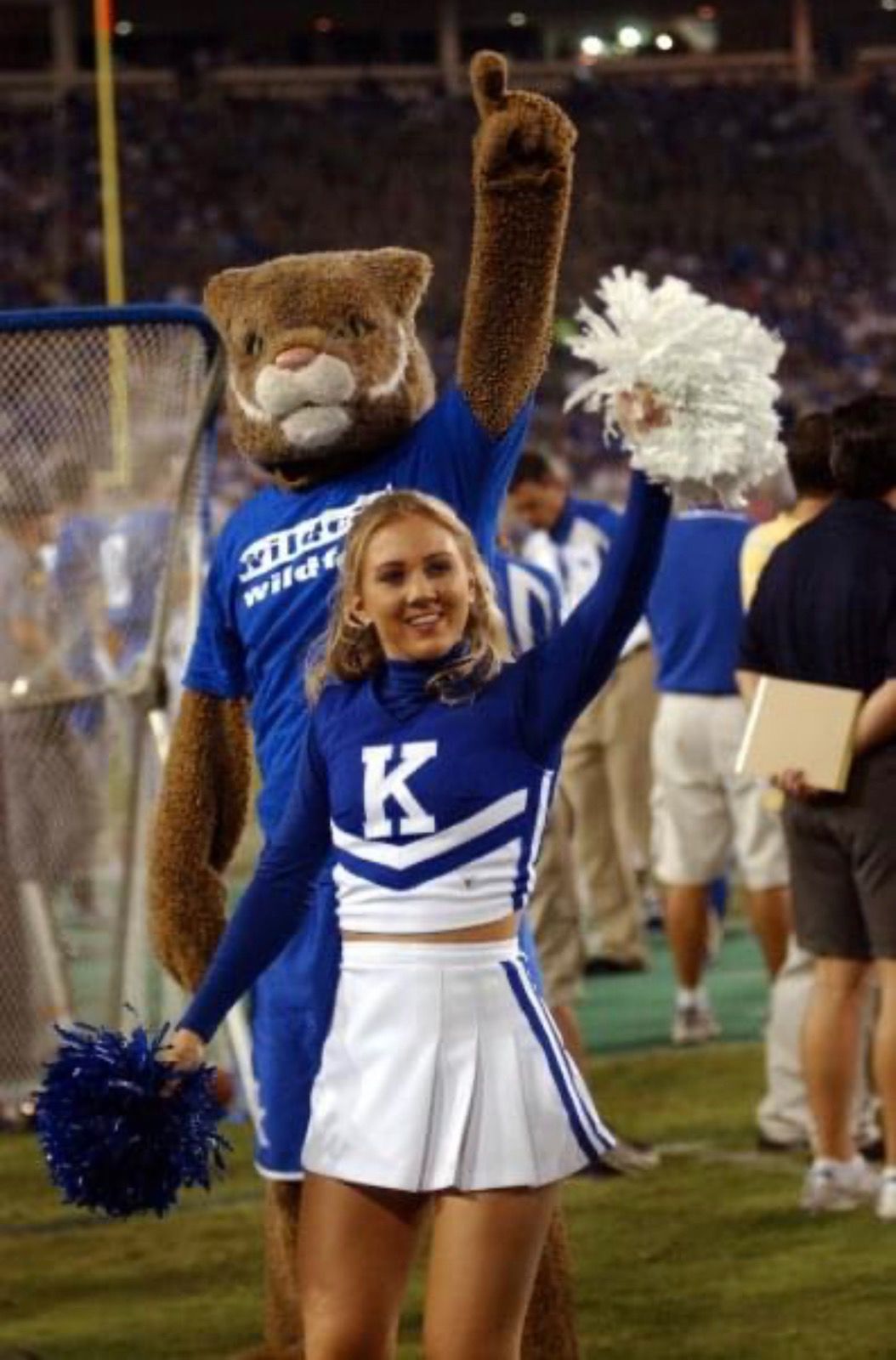 Emily (Sergent) Borders and Wildcat (Ross Turner of Russell) pump up the crowd.

Kentucky cheerleaders get the crowd excited before a football game last season. DON MCREYNOLDS | FOR THE DAILY INDEPENDENT

Emily (Sergent) Borders cheers on the Wildcats in 2007.

Kelli Long Elkins and Jomo Thompson smile for a photo prior to a Kentucky football game against Georgia.

University of Kentucky cheerleaders fire up the crowd during the Wildcats' game against Tennessee last fall. DON MCREYNOLDS | FOR THE DAILY INDEPENDENT

Emily (Sergent) Borders and Wildcat (Ross Turner of Russell) pump up the crowd.

“It takes talent to win. It takes character to repeat.”

Those words ring true now just as they did 13 years ago for Emily Borders. She said she often reflects on the statement as a source of inspiration. It was from her beloved coach Jomo Thompson when she cheered at Kentucky during the 2007-08 school season.

The university released a report this week detailing a three-month investigation into the program. It stated that some cheerleaders had engaged in hazing activities, public nudity and alcohol use at a Universal Cheerleading Association camp and at their annual retreat. The university fired four coaches as a result. The team advisor retired days after learning of the investigation.

Borders said these alleged incidents in no way resembled the culture and environment under Thompson’s leadership during the time she was there.

“Nobody had better character or work ethic than Jomo,” Borders said. “He was always like, you don’t have want, work harder. You have absolute responsibility and you are responsible for who you are and who you become. I have all the respect in the world for Jomo and it’s heartbreaking to hear this stuff. I love UK and I bleed blue. I don’t agree with the decision at all. I fear it will be detrimental to the program.”

The Boyd County teacher, known as Emily Sergent at the time, said Thompson and Thomas Williamson (T-Lynn), who was a team advisor for more than four decades, were the epitome of class and professionalism.

“My true-blue heart was broken to see headlines and read articles of the most amazing coaches’ names being dragged through the mud,” Borders said. “It is absolutely heart-wrenching to people that have been through the program and know the coaches and have experienced their leadership. If you’ve been through it, you know the true character and integrity of Jomo and T-Lynn. I think I can speak on behalf of all the cheer alumni; it makes you sick and angry.”

Before Thompson was coach and led the program to 12 of its 24 national championships during his tenure, he was a member of the team and the cheerleading partner of Kelli Long Elkins. The Boyd County alum and owner of Zella Rose Boutique said in an email statement that she and Thompson became great friends and speak often. She quickly came to his defense in a recent Facebook post.

“I know the program has been under fantastic leadership,” Elkins said. “A true legend in the cheerleading world. (Jomo) held my life in his hands, literally. … He has worked so hard to become an unbelievable coach and an even better human being and friend. I’ve always got your back Jomo because you always had mine.”

From the moment you were selected to the squad, each member was told about the team’s philosophy on absolute responsibility and what was expected of them wearing the UK uniform, according to Borders.

“There were rules and they were enforced,” Borders said. “The second I made the team after the first tryout, we went up to the bleachers and we were, of course, congratulated and welcomed into this gold-standard program and we were immediately told the expectations. We were a presentation of our school and our community and represent it with nothing less than absolute excellence on or off the mat. Whether we were in front of thousands of people in our uniform or out in daily life.”

The report found that the coaches did not “actively encourage the team to engage in harassing behavior.” The investigation by the Office of Institutional Equity and Equal Opportunity did state that “they knew or reasonably knew about the incidents of inappropriate conduct by cheerleaders and failed to take significant steps to address the conduct.”

It alleges cheerleaders performed partially nude “basket tosses.” Younger team members had to perform lewd chants, a tradition that dates back to the 1970s, according to the investigative report. It also states several engaged in alcohol use during team camp at East Tennessee State and their retreat at Lake Cumberland.

"The advisor and the coaches failed to stop a culture of hazing, alcohol use and public nudity at off-campus activities where they were present," said Eric N. Monday, UK's executive vice president for finance and administration. "Our students deserve more responsible leadership and the University of Kentucky demands it."

Borders said she did not attend these retreats, but during her time, the team was repeatedly made aware of the rules and alcohol was never permitted. If the rules were broken, the entire team would experience the ramifications.

“The one allegation doing the basket tosses without clothes on, that is just so absurd to me,” Borders said. “I wasn’t there, but if that were in the eyes of Jomo or the other coaches, they would have been horrified. They would have been reprimanded right there. No way that they knew about that.

“They were always present,” she added. “We would travel a lot and alcohol was the biggest no-no ever. Even if one single person broke the rules, the entire team was punished.”

Elkins has attended these camps and retreats. She said “there was no hazing or pressure to do anything you didn’t want to do.”

“The cheer program at Kentucky is as professional as it gets,” Elkins commented on Facebook. “The integrity has been unfairly compromised. It has had such a positive effect of my life along with so many others. … I wouldn’t be where I am today without KY cheer.”

Borders said she will forever support and defend the character of Thompson. She is proud to have been under his leadership. She recalls a fun and engaging atmosphere during her one season on the team.

“When I was there, it was such a positive environment always,” Borders said. “There are going to be traditions and my initiation was learning the UK fight song and ‘My Old Kentucky Home.’ The freshmen would learn it and you would sing it in front of everybody else. It was just so positive and one of the most fun experiences of my year there. It was encouraging and all team-building. It was never a hazing environment, not like the one the media is making it seem like. I never experienced anything like that.”

Current and former cheerleaders are sharing that same sentiment. Many have taken to social media to declare their love and support for the coaches.

The Lexington Herald-Leader reported that the investigations included interviews with 60 students, coaches and administrators. There were 54 cheerleaders on the team, and investigators interviewed every one of them.

“They weren’t really questions; they were insinuations,” Graham added.

Jaxson Noel, a former UK cheerleader who left the team after the 2019 fall semester, said anything that occurred had nothing to do with the coaches. “The coaches never did anything but try to help us grow, make us better people and prepare us for the real world,” he said.

“It was only for fun to bring us together,” he told the Herald-Leader on Monday. “The coaches aren’t dumb and know we are going to party, but they always told us that if we needed them, we could count on them. They are honestly the best leaders and coaches I’ve ever had across every sport I’ve ever played.”

The Cheerleading Alumni of the University of Kentucky released a statement on Thursday affirming its unwavering devotion to the coaches and their character.

“Our group is unanimous in its support of T. Lynn, head coach Jomo Thompson, and assistant coaches Ben Head, Spencer Clan and Kelsey LaCroix,” the statement said. “And though what is alleged to have happened with the current squads is regrettable, we support them too, because we believe no person should be defined by their mistakes.

“To say the UK cheerleading advisor and coaches lack integrity is insulting,” the statement continued. “To suggest that the advisor and coaches didn’t provide proper oversight is absurd. To so harshly penalize a program — especially one that has led such an exemplary existence for four-plus decades — is unfair!”

Borders and Elkins weren’t surprised by response from former cheerleaders.

“I think that speaks volumes about Jomo and the program,” Borders said. “You see people from around the world speak to his character and his integrity. I think people need to start listening to the athletes and people who have experienced Jomo’s leadership.”

“The support shown from current and former cheerleaders is exactly what I thought it would be,” Elkins added. “I love seeing so many speak out on the positives and professionalism of the program. It’s truly a top-notch, premier program.”

An online petition at change.org has started calling for the exoneration and rehiring of the UK coaching staff. Nearly 14,000 people had signed as of Friday afternoon.