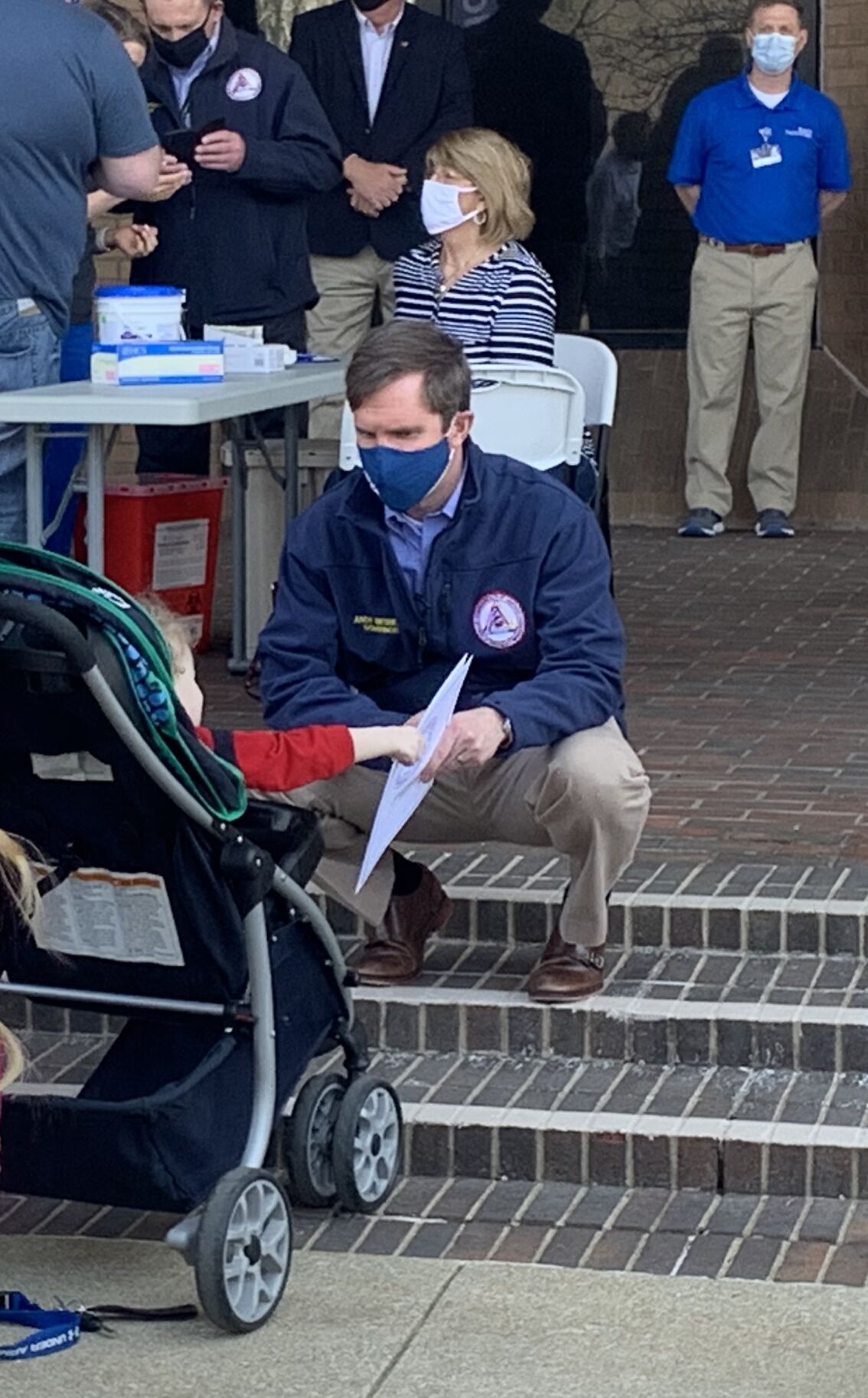 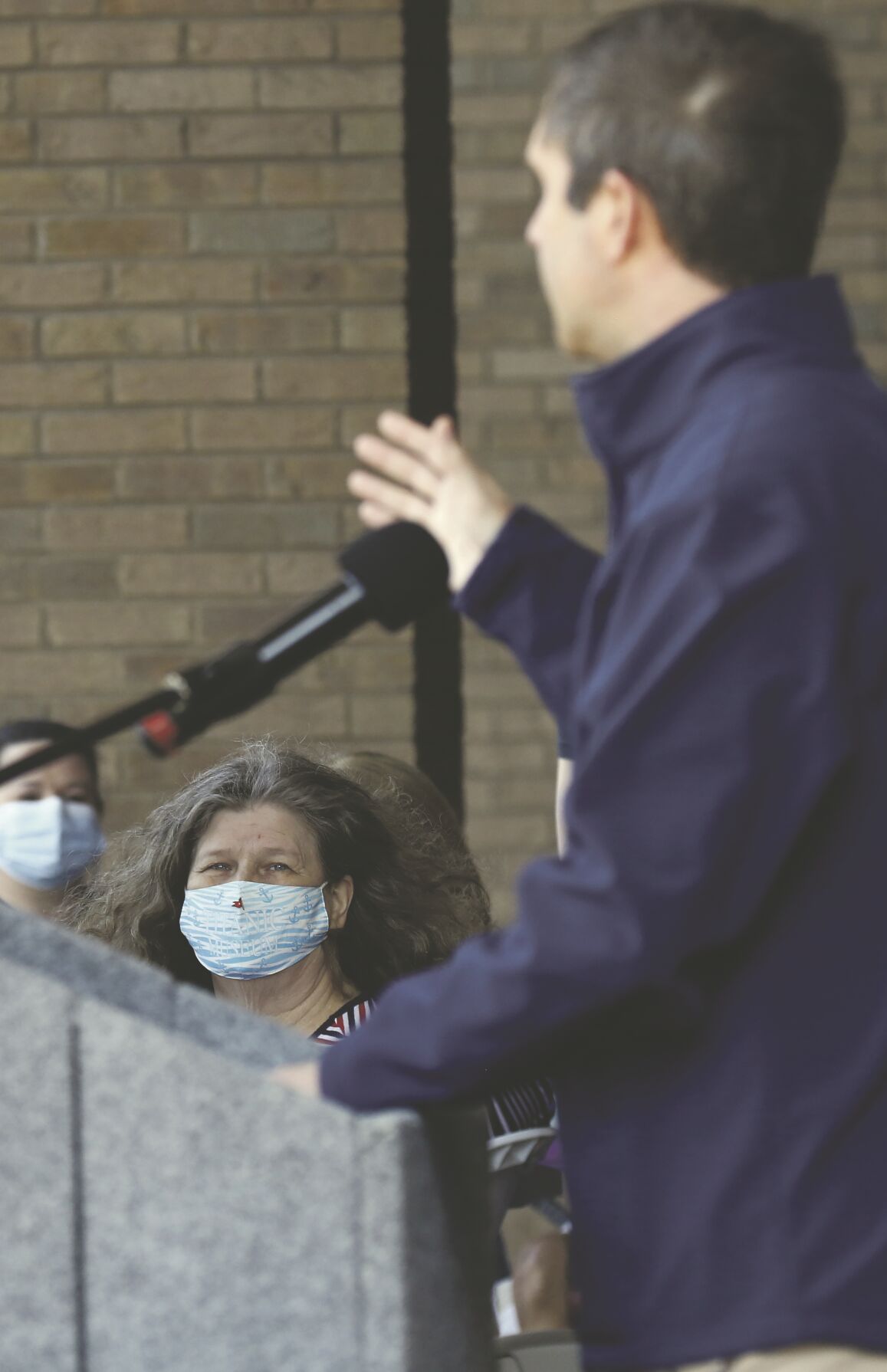 Matt Jones | The Daily Independent Elizabeth Fisher listens as Gov. Andy Beasher talks about the state’s response to the COVID-19 pandemic at King’s Daughters Medical Center’s Pavillion on Wednesday. Fisher said Beshear convinced her to take the COVID-19 vaccine during the event. 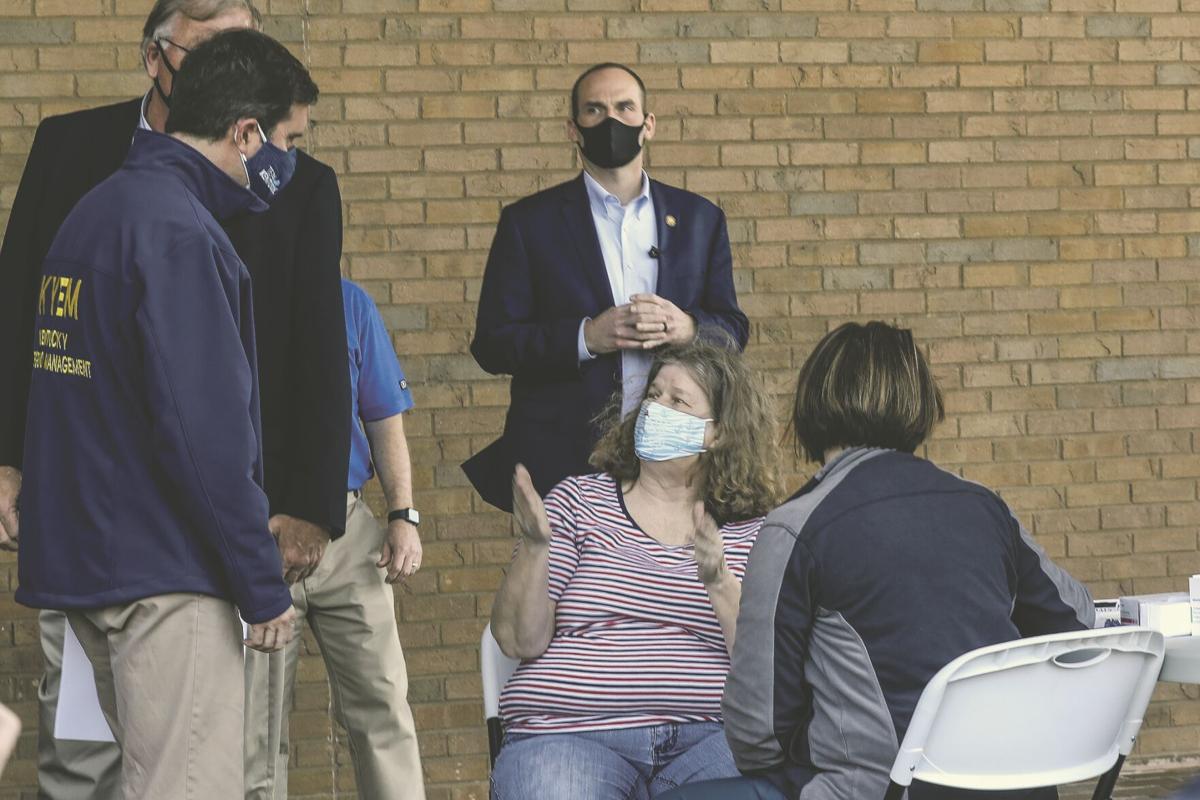 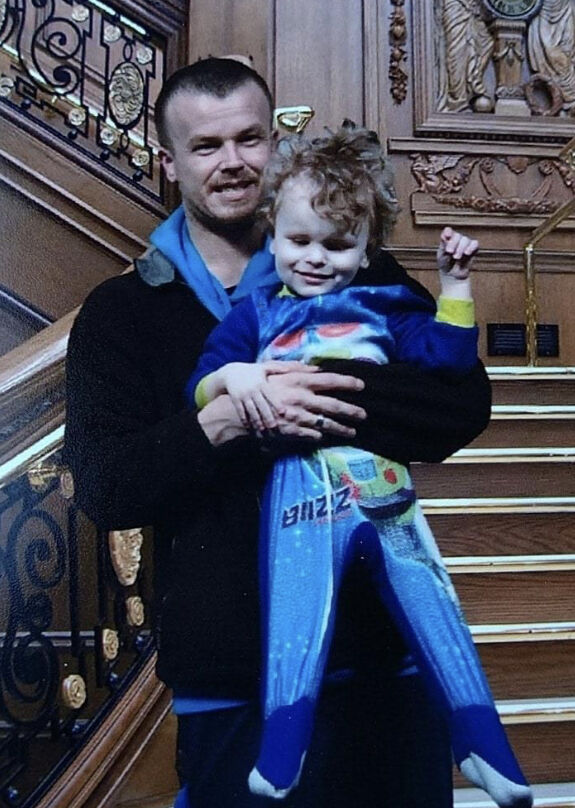 Matt Jones | The Daily Independent Elizabeth Fisher listens as Gov. Andy Beasher talks about the state’s response to the COVID-19 pandemic at King’s Daughters Medical Center’s Pavillion on Wednesday. Fisher said Beshear convinced her to take the COVID-19 vaccine during the event.

RUSSELL Kentucky’s governor squatted in front of a 2-year-old Flatwoods boy, and handed him a souvenir on Wednesday afternoon.

Jacob Fisher received an official Commonwealth of Kentucky folder, which had contained Gov. Andy Beshear’s speech he was set to deliver at the KDMC Pavilion. He prepared words of praise for King’s Daughters Medical Center and provided an update on the vaccination situation in Kentucky.

As memorable as Jacob’s first encounter with the governor was, Jacob’s grandmother, Elizabeth Fisher, received more than she expected, too.

Fisher’s other grandson, Noah, once referred to Beshear as her “boyfriend,” and she couldn’t wait to tell the governor himself. When she saw on a local news station that Beshear was making an appearance on Wednesday, she decided she, her son Greg, and Jacob would check it out.

Fisher managed to speak with Beshear after making a deal with a member of his staff on scene.

Although eligible to get a vaccination because she’s 59, did not have an inoculation appointment scheduled. However, a man on Beshear’s team attempted to talk her into accepting the dose.

“I was scared to death of it, and I didn’t want to do it, but he said I could meet the governor if I got my shot,” Fisher said. “I went back to the car and told Greg and I messaged my daughter. She said, ‘If you’re guaranteed to meet the governor, get your shot.’ So I did.”

As of Thursday morning, Fisher said she had not experienced any side effects. In addition to meeting Beshear, she also got the vaccine for her grandsons. If they contracted COVID-19, it’d be rough on them, she said, because Noah has asthma and Jacob has health issues, too.

Fisher relished the chance of talking to Beshear. She shared a comical story.

“I watched him faithfully on TV (at the onset of the COVID-19 pandemic), and then I didn’t watch as much, and Noah says, ‘Why aren’t you watching your boyfriend no more?’” Fisher said. “So I told (Beshear) that story, and he and his security team let out the biggest chuckle.”

Her favorite moment, though, was Beshear spending a few minutes with Jacob.

“His attention was on the baby,” she said. “It shows what a kind man he is. He had a press conference and was going to talk about this pandemic, but he took the time to talk to Jacob.”

Jacob, according to Greg, will turn 3 on April 4. When he was born, he weighed just 4 pounds, 11 ounces, and had contracted CMV (cytomegalovirus). He is deaf in both ears, and deals with development delay in his motor skills. He doesn’t know how to walk yet. Jacob has cochlear implants and works with a speech therapist at KDMC.

Greg and the Fisher family are trying to learn sign language, too.

Elizabeth Fisher said Jacob is “one of the lucky ones.”

“The outcome of the child with CMV could be really bad, even death,” she said.

According to Mayo Clinic, CMV is a common virus. Once a person is infected with it, the body retains the virus for life. It rarely causes problems in healthy people, but women who develop an active CMV infection during pregnancy can pass the virus to their babies, according to Mayo Clinic. Because babies have weakened immune systems, it can cause serious issues.

Elizabeth Fisher said Beshear informed her Bella’s Bill is on his desk right now. It is designed to require the Department of Public Health in the Cabinet for Health and Family Services to provide educational resources related to CMV to pregnant women and to add CMV to newborn screenings, according to The Adair Progress (Columbia, Kentucky).

Jacob’s grandmother said “it’s amazing what he can do.”

The family has adopted “Fight Song” by Rachel Platten as Jacob’s song.

“He’s showing everybody he can do this,” Elizabeth Fisher said.