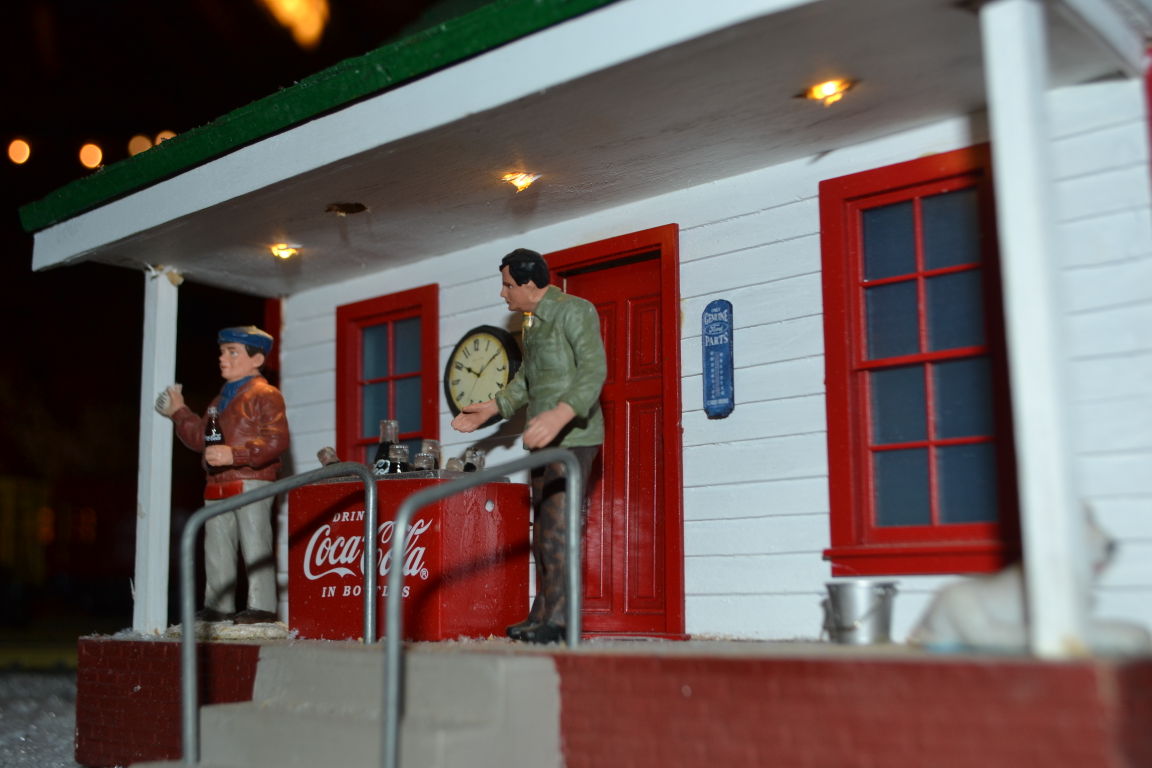 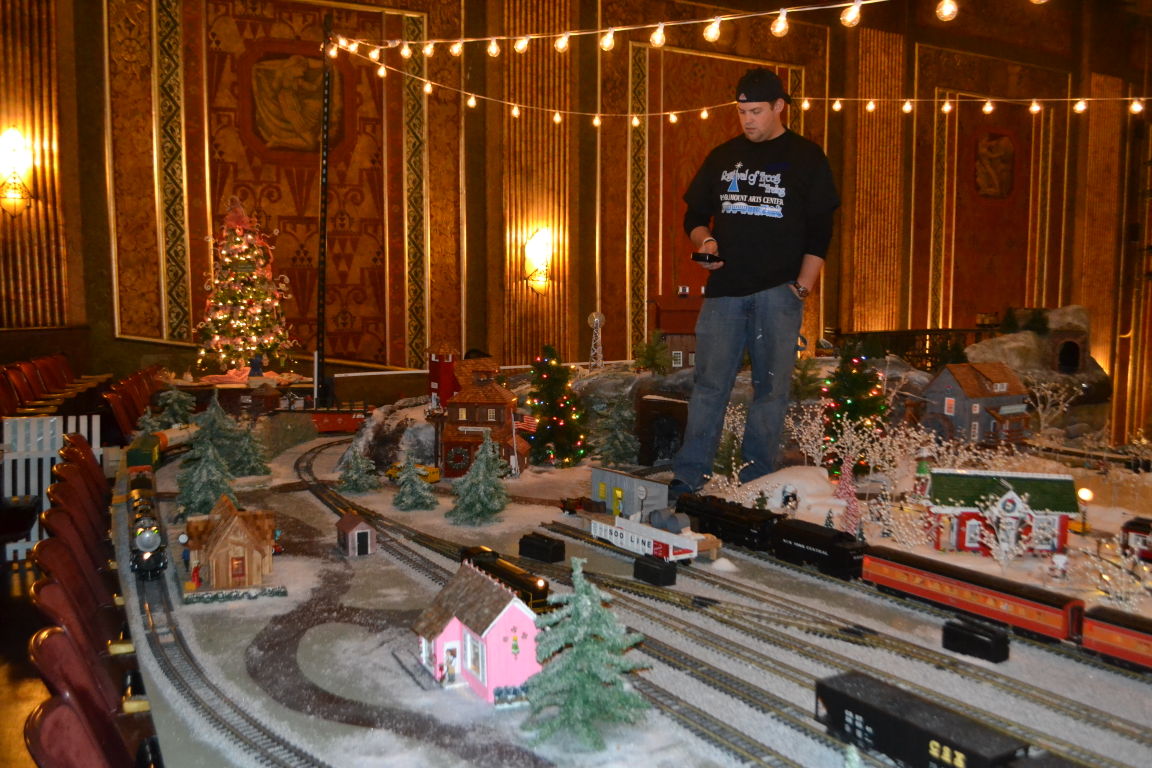 ASHLAND Half the charm in a model train layout lies in the details — the terrier lounging by the steps  at the gas station, the tiny airplane in the window of the toy shop, the well-dressed ladies with their suitcases on the depot platform.

Those are what people come to see as much as the miniature steam locomotives chugging by, and the layout designers at the Paramount Festival of Trees and Trains took steps this year to bring more of the enchanting model minutiae close enough to see clearly.

Among changes made to the immense layout in the theater balcony this year were re-routing closer to viewers the main line where the big Challenger articulated steam locomotive pulls a string of coal cars, and positioning three buildings to within a couple of feet of the platform edge.

So placed, they are in prime spots for spectators to drink in the details: the Coke machine at the gas station with pop bottles swimming in the ice, the clock and thermometer showing 10 minutes after 10 p.m. and below freezing on a cold winter night, the apron-clad shopkeeper sweeping the steps outside the toyshop, the cars and trucks parked at the depot.

The toyshop and gas station have been on the layout before and the depot is a new addition. Among the charms of the layout is that nothing is ever finished. There will be more toys in the shop next year, more passengers and baggage at the depot, more auto parts at the gas station.

The structures and the realistic scenes are magnets for kids as well as adults.”I like the ice skaters and the bridges. I like the town. It looks like a real town,” said 7-year-old Karlee Fliehman, who after visiting the festival for the second year already considers it a Fliehman family tradition.

Chances are there will be more structures too, and perhaps more track, according to Chris Lockwood, one of the layout’s devoted crew of volunteer workers and operators. “You’ll see everything a little bit better next year. We’ll add a little bit more,” he said.

Lockwood is one of a new generation of model rail enthusiasts. At 26, he has been working on the Paramount layout since its inception 10 years ago, and his day job is a dream gig for train freaks: Lockwood is general manager and trip manager for the Collis P. Huntington Railroad Historical Society.

Train modeling traditionally has been a preoccupation of older men, but that is changing, Lockwood said. “It’s always been an older folks’ hobby because they have the time and the skill, but younger people now like it because technolgy is catching up,” he said.

To illustrate he displays his remote control unit, almost indistinguishable from the gizmo that turns TVs on and off. Lockwood’s unit controls train speed and direction, the volume of smoke steam locos emit, and a plethora of sound effects: whistles, bells, shouted crew instructions and more. “Most younger kids are into computers and technology, and that’s what this is,” he said.

The ever-growing, ever-changing layout is a marvel of complexity and ingenuity. At about 2,000 square feet, it has four levels and 1,400 feet of wiring behind the scenes to provide power to the locomotives and the LED lights that illuminate the structures. Volunteer Joe Rosenthal is the premier electrician for the wiring, Lockwood said.

Engineered for yearly assembly and disassembly, the layout goes up in a week before the festival and afterward is broken down into components for storage.

The train layout is “a masterpiece” that perfectly complements the temporary forest of Christmas trees for which the festival was originally planned, said co-chair Christy Reaves.

“Adding trains changed everything. There are people who say they come just to see the trains,” she said. “Ten years ago, we wondered if the festival would last as a fund-raiser. Within two years, we realized it would change the face of the festival as a fundraiser.”

A decade later, the festival takes in twice as much in gate receipts to fund Paramount education outreach programs. Just as important, Reaves said, it has transformed the festival into a true family event, one at which moms, dads and kids of all ages can enjoy the attractions and the musical entertainment on stage.

“By now the trains are part of the history of the Paramount,” Reaves said. “In 50 years, they’ll say, ‘Do you remember the big trains in the balcony?’”

The festival is open from 10 a.m. to 9 p.m. today and Sunday. Musical acts are scheduled each day, and Santa Claus will make an appearance on stage from 11 a.m. to 2 p.m. today.