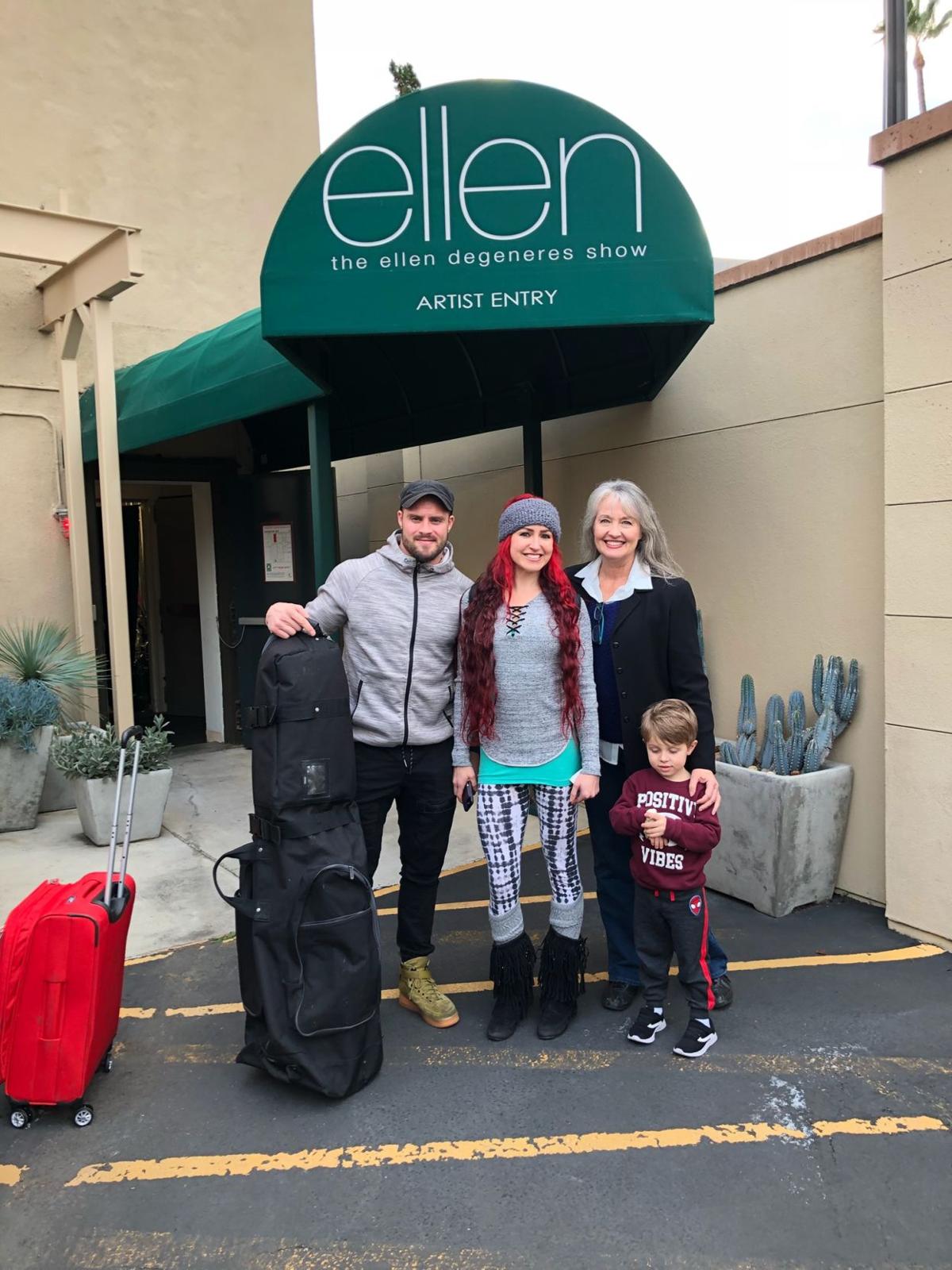 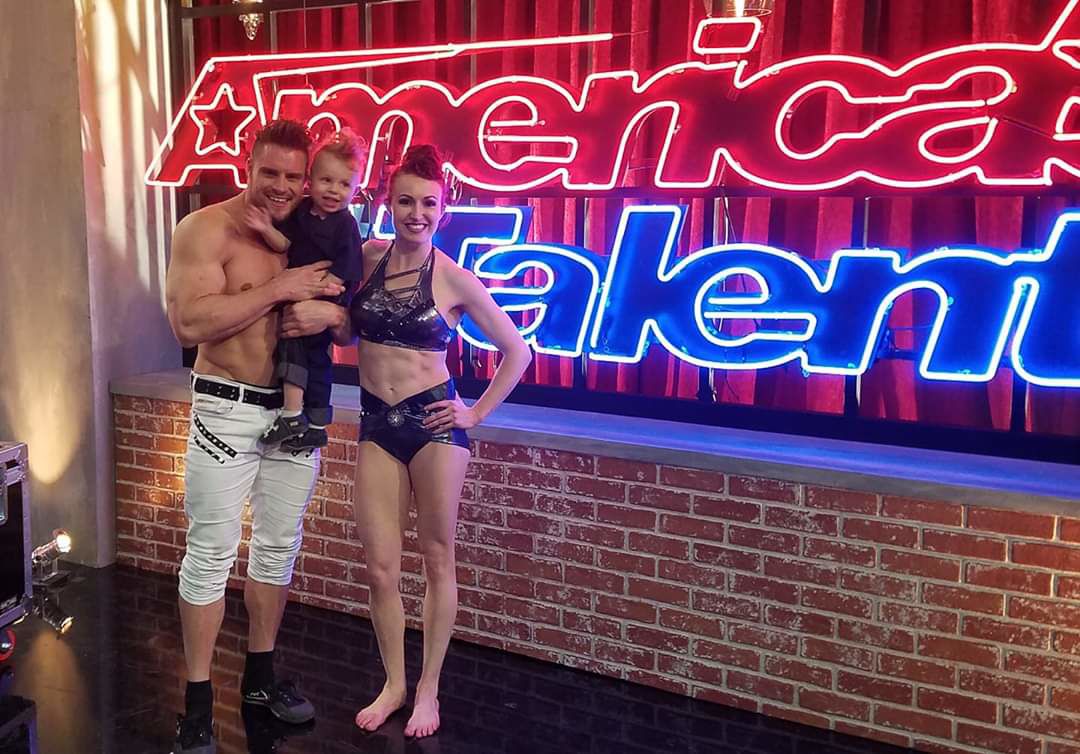 HUNTINGTON In 2018, Huntington native Mary Ellen Wolfe-Nielsen and her husband Tyce Nielsen were flying high, not just metaphorically, but near the ceiling above the stage of the Dolby Theatre on  “America's Got Talent.”  The aerialists, known as Duo Transcend, that also incorporate other talent into their performance were just two of thousands of people from around the globe to audition for the world's premiere talent show.

Duo Transcend made the cut and soon were on a roll advancing week after week to the next round, until they had a setback that looked very grim. A stunned silence came over the crowd, including a close-up camera shot of Mary Ellen's mother-in-law Shelley Nielsen, 2-year-old son Jaxx Nielsen and mother Deborah Wolfe, when Mary Ellen slipped through the grasp of her husband and landed on a safety mat. They rebounded from that mishap and made it all the way into the top 10 on “AGT” in 2018.  On Feb. 17, they crushed that accomplishment by becoming runner-up in “America's Got Talent: The Champions,” a competition that featured former champions and other acts that did very well on “AGT” and its sister talent shows from many countries.

Doing well in competitions is common in the Wolfe family. Mary Ellen's father, Kim Wolfe, served two terms as sheriff of Cabell County before being elected mayor of Huntington. Mary Ellen's mother is a former Miss West Virginia that became a top 10 finalist in the Miss America Pageant in 1980. She followed that up by becoming Mrs. America 1984.  “We were married and we had three children,” Wolfe explained. Her husband was a Huntington policeman and she said she hoped to win money to help support the family. Their son Sgt. Paul Wolfe is an officer with the Kenova Police Department.

In those days Wolfe stayed busy taking care of the family, which grew to include eight children, several, including Mary Ellen, whom she home-schooled. That number increased to 10 after she and her husband adopted two children. As a teen, Mary Ellen kept busy with school, and had various jobs including lifeguard/swim instructor at Huntington YMCA. While home-schooled she began taking classes at Marshall University and became a full-time college student after finishing high school two years early.

Hanging upside down on a trapeze, or spinning at a high rate of speed, as Mary Ellen's head comes just a razor-thin margin from the rollerskating table, as her husband whirls her around in one of their acts, is something that would have seemed unimaginable just a few years ago.

“Mary, she didn't do any gymnastics, she never had acrobatics, she wasn't a cheerleader, any of that stuff. She was in college in Utah on a ballet scholarship. She was a little ballerina and had an accident about nine years ago and they were going to amputate her right foot, and they said that she would never walk again,” Wolfe said.

The accident happened while Mary Ellen was performing in a diving show in Branson, Missouri. Deborah Wolfe brought Mary Ellen back to Huntington for another opinion.  he credits Dr. Brian S. Boxer Wachler at Marshall University's School of Medicine for saving Mary Ellen's foot.

When Mary Ellen was recuperating in a hospital her mother couldn't understand why she wanted her to bring her a laptop computer and dumbbells.

“I have to learn to dance in the air,” Mary Ellen told her mother. Because of having to have her foot rebuilt, Mary Ellen wanted to do something that wouldn't require her to be on her feet.

“She started pumping dumbbells and four months later she started trying to walk again,” Wolfe said.  Mary Ellen built up her upper body strength to be able to do the tough circus skills she performs. Tyce Nielsen had just returned from a two-year Mormon mission trip and his brother that was dating her, asked if he could get Tyce a job as a lifeguard. Tyce had done a lot of strength training so he told Mary Ellen he would train her.

Mary Ellen was previously a diver in a show in Salt Lake City while she was attending the University of Utah. Mrs. Wolfe jokes that her only experience diving previously was diving off of cliffs at Grayson Lake.

Lately Duo Transcend have been performing their rollerskating act as a halftime show for NBA games. They do that act instead of their aerial act because it is easier to set up that equipment in a limited amount of time.

After becoming one of the 12 finalists this year, Mary Ellen and Tyce stayed loose while awaiting the finale. They were guests on “Ellen” and performed their aerial act blindfolded. They also got to spend some time off camera with the popular TV star. Ellen DeGeneres even played with Jaxx, now 4.

It wasn't the first time a Wolfe had been on a popular TV show. Wolfe was a guest on “Today” (show) after winning the Mrs. America pageant. It just so happened that President Ronald Reagan was watching and was so impressed with Wolfe talking about family values that he invited her and her husband to the White House.

As Cabell County Sheriff Kim Wolfe had another brush with fame when “We Are Marshall” was being filmed in Huntington. He accepted a challenge from Matthew McConaughey to have a push-up contest. Kim Wolfe said they both did about 40 before McConaughey stopped the contest.

In Hollywood, “America's Got Talent: The Champions” on Presidents’ Day started with a bang when Kiss performed its classic “Rock and Roll All Nite.” Other great performances and surprises followed that until it was time for the contestants to learn their fate. Duo Transcend stayed safe as one act after another was let go. The acts were thinned down to three, and then two. Then shortly before 10 p.m. EST with only Duo Transcend and V. Unbeatable left standing, the tension grew as host Terry Crews took a dramatic pause before announcing V. Unbeatable, an acrobatic dance group from Mumbai, India, as the winning act.