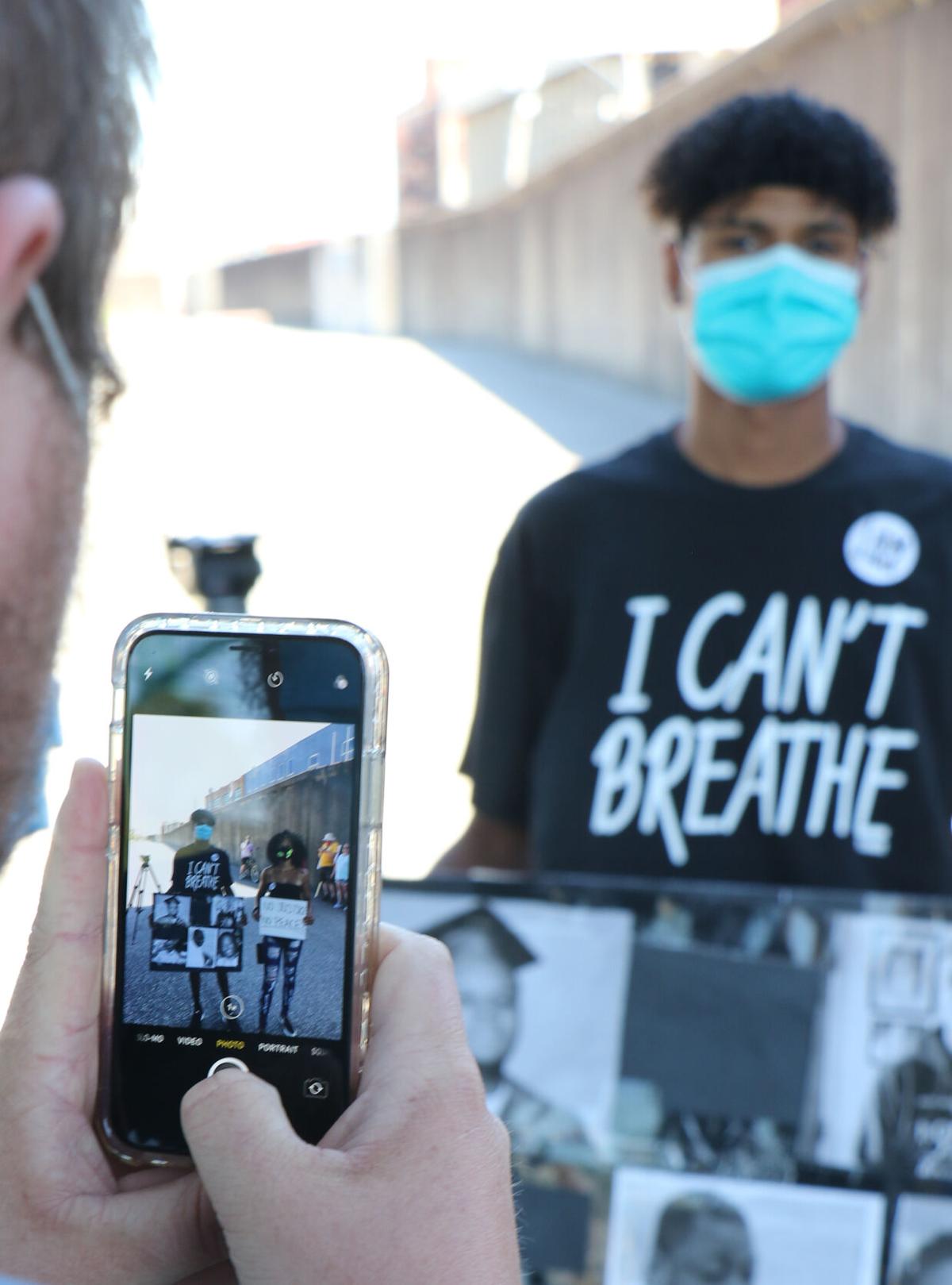 Matt Jones | The Daily Independent Protesters Austin Johnson and Alexia Sharp are photographed by Sean Jaycox before the start of Sunday's March for Justice in Ashland. 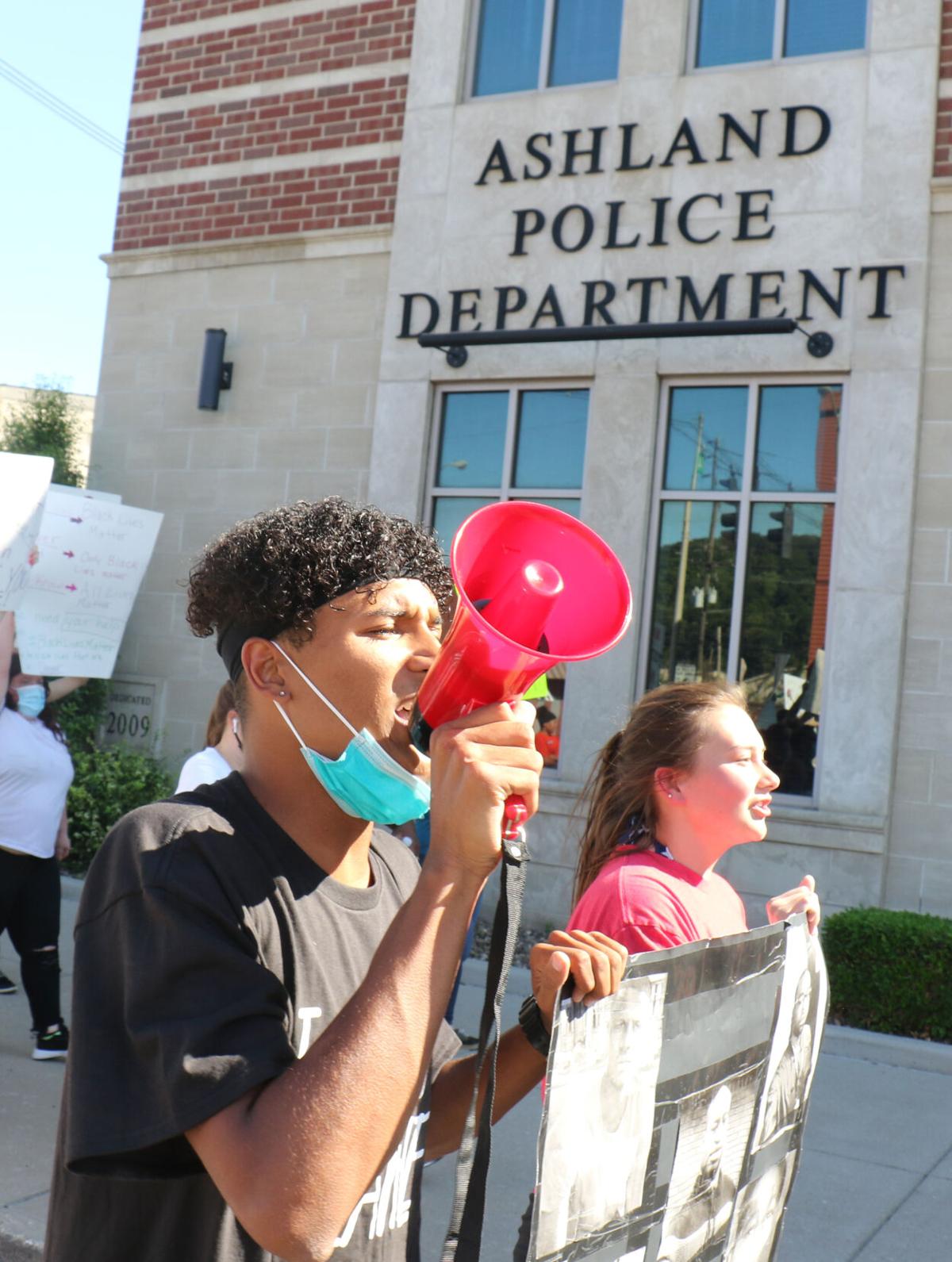 Matt Jones | The Daily Independent Protesters Austin Johnson and Alexia Sharp are photographed by Sean Jaycox before the start of Sunday's March for Justice in Ashland.

SOUTH POINT When Austin Johnson was in kindergarten, he came home crying one day because he didn’t want to be Black.

In his early years attending school in South Point, Johnson said he wasn’t proud of being Black, of being different. He remembered slavery and segregation — two sins of American history — being taught in school and having the entire class turn to look at him.

“When I’d say something about it, they’d knock it down and say I shouldn’t feel like,” he said. “It shapes who you are.”

So Johnson adapted, “playing the white man’s part” as he likes to say. Johnson said by assuming the characteristics of his white peers, he felt like he could be heard, he could get things done. However, that came with its own set of problems — Johnson said he’s had black people tell him “he’s the whitest black guy they know.”

“What does that even mean? What they’re talking about is the stereotype of a Black person,” he said. “I’ll ask them, what should I do? Sell drugs? Own illegal guns? Is that what a black man does?”

While he tried to assimilate when he was younger, Johnson would be reminded he was black. Like when girls wouldn’t date him because their daddies “didn’t approve of race mixing,” Johnson said. His hair — he always wanted dreadlocks, but he was concerned about the connotations that came with it. He kept it short, until recently.

Sitting at a table under the pavilion at South Point City Park, Johnson views the site where he hopes hundreds of people will congregate Friday at 5 p.m. for the “March for Social Justice.”

“In all my 19 years, I’ve never seen anything like this,” he said. “I don’t think I’ve heard of something like this happening in South Point.”

Like many areas across the country — from Louisville to Ashland, and from Huntington to Chicago — Johnson said he wants to “say their names.”

Johnson said he is tired of seeing unarmed Black people killed by police, the outcry that follows and no tangible change instituted.

“It’s a vicious cycle,” Johnson said. “Nothing happens out of it. We need to keep this discourse going because change comes out of it and that’s what (today) is going to serve.”

Since Johnson was 16, he has always been interested in social justice. Remember the walkout over South Point in response to the 2018 Parkland, Florida, school shooting? Johnson said he had his fingerprints on that — in fact, about 60 students rallied at the same park.

To Johnson, the issues of racism in America, especially as it pertains to the police, isn’t going to have a one-size-fits-all solution. He said breaking up the grip police unions have on hiring and firing rules, providing more funding to mental health care workers to respond to crises and doing away with qualified immunity — the body of case law that protects some police actions — is a good start.

“It’s a lot to ask for once you first look into it, but it’s not a lot once you get the ball rolling and get people going,” Johnson said. “Policing needs to be about serving and protecting, not divide, destroy and kill.”

The march isn’t going to bring about that change, but it will help get the discourse going about those issues, according to Johnson. He wants everyone to come out, regardless of where they fall on the police reform issue.

“This rally has a purpose; it is a way for people to come out and speak what they’re feeling,” he said. “Even if you don’t agree, come out and say everything to everybody. It’s about learning perspectives, not changing opinions, because your opinion is usually set in stone. It’s about coming here to add perspective to people who haven’t been through something.”

Johnson said he won’t allow friends to wear hats or bandanas in his car while they’re driving at night. He checks his blinkers and headlights every time he leaves the house. Even when Ohio discontinued the front license plate, he kept his just in case a police officer would use it as a reason to stop him.

“I’ve seen too many videos where a traffic stop turns into somebody dying,” he said. “As a person of color, I have to think about these types of things.”

The march is a part of showing white folks what that is like, Johnson said.

With concern about violence swirling about, Johnson stressed the demonstration is going to be peaceful.

“The mayor told me they had people calling in asking what they should do with their families or their property,” he said. “It’s not going to be violent at all. We’re going to be chanting and singing and worshipping.”

The March of Social Justice will begin at 5 p.m. at the South Point Park across from the city’s police station.