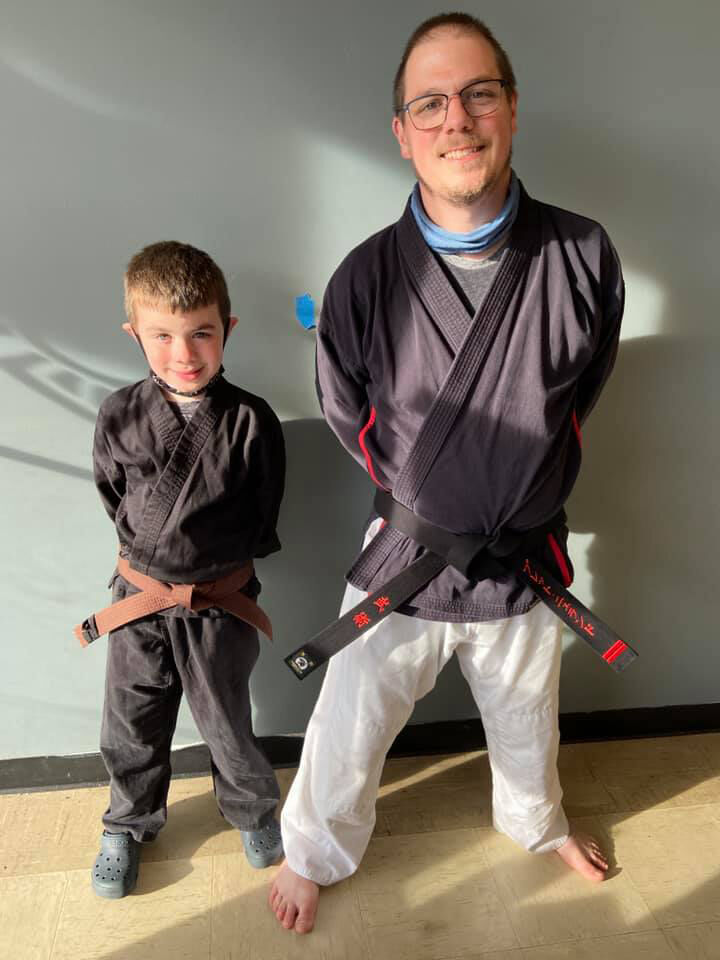 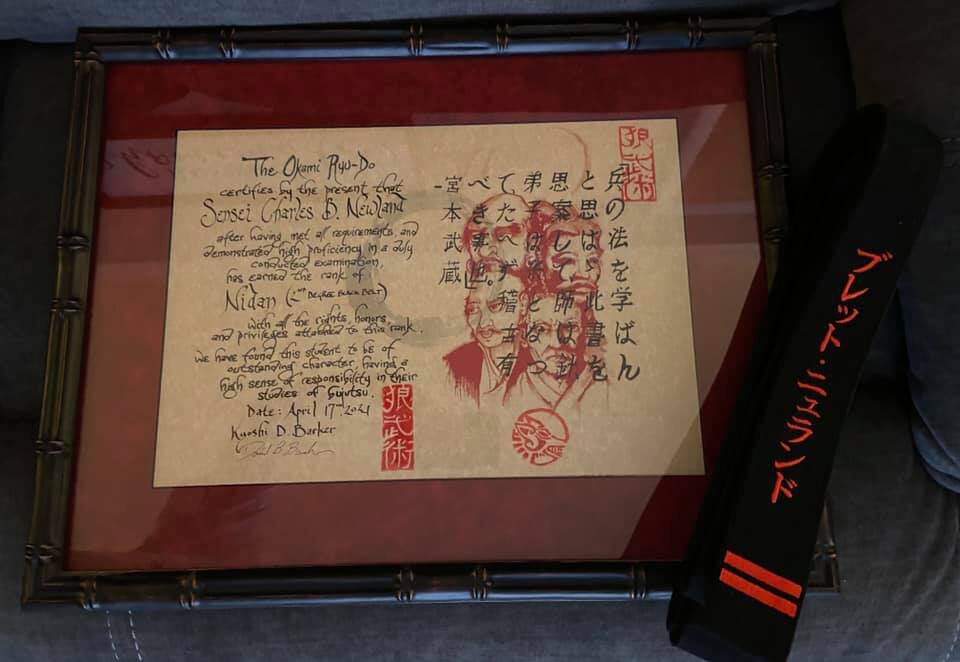 Brett Newland, of Greenup, has studied the martial arts discipline of Bujutsu for quite some time, he said.

Newland earned his first-degree black belt about two years ago, he said, and at that point he began helping teach classes at his dojo.

The dojo follows the discipline of Okami Ryu Do Bujutsu. Newland explained his form of Bujutsu is what is known as a warrior art. The translation of the style name is “the way of the wolf and the dragon.” Newland (and his son Braxton’s) instructor in the art is Sensei David Barker, and his official title is Kyoshi, denoting his status as “professor” or “master” of the art. Barker, Newland said, is a seventh-degree black belt in the system.

“It’s a common saying among black belts that everything before black belt is a tutorial,” Newland said. “Once you reach black belt, then the higher learning begins.”

Newland said once a student reaches black belt, they are able to reflect upon what they have learned and then with future learning slowly incorporate everything into an individual “style” of martial arts.

Martial arts, he said, has many different methods of both defense and offense, but each person needs to individualize them to maximize their strengths as well as improve upon and hopefully eliminate their individual weaknesses.

“I always tell my students that their martial arts are like their thumbprint,” Newland said. “There will be things that might work better for me than they would for someone else, and vice versa. It doesn’t mean that every student doesn’t do the same move; it just means that there will always be subtle differences. My style of martial arts leans more toward what we call hard style, for instance, as opposed to the soft style.”

The difference, Newland explained, is hard style has more direct and precise movements, whereas soft style is the more flowing and less rigid martial arts moves.

Newland said movies have raised awareness of the martial arts, but overall, it has given people somewhat of a one-sided view of the sport.

“A lot of people come into the dojo and the first thing they say is that they want to learn how to fight,” he said with a smile. “And when they do, my answer is that I am going to teach them how to defend themselves, and as a result they will learn how to fight.” The difference might seem subtle to most people, but it is really a hallmark of what martial arts is about, Newland said. It goes beyond simply practicing moves and become a lifestyle of growth. This is the reason martial arts are referred to as disciplines, Newland said.

“We really don’t condone the mentality of fighting for fighting’s sake,” he said. “When you come here you are learning the art of how to defend yourself. Bujutsu is a warrior art, the translation is the art or science of war, and as a result there are components of other martial arts within Bujutsu. But learning Bujutsu is not about simply learning to fight; there is much more to it than that.”

The “real world” benefits of learning martial arts go beyond the walls of the dojo, Newland said.

“My instructor always tries to impress this upon his students using a quote from Miyamoto Musashi, who wrote the book ‘The Book of Five Rings.’ Musashi was a samurai and said, ‘The true way of martial arts is to train so that these skills are useful at any time. And to teach these skills so that they are useful in all things.’ And that is what you seek to do in martial arts,” Newland said. “Because you don’t expect to be blocking and punching in normal life. But the goal is to make sure that your skills are ready at any time.”

Those skills have many more uses than in a scenario requiring combat.

“I try to teach my students how to employ the core benefits of what they are learning,” he said. “There are degrees of balance, structure and even posture. And training gives you a degree of autonomy; the goal of drilling things is so that at some point you no longer have to drill those lessons. They become second nature, a part of who you are, and you can employ them without think to protect yourself in so many ways. And one of the most common benefits is we teach an art called Ukemi, which translates to the art of falling.

“People think that it’s funny,” he continued, “that there is a martial art for falling, but it is more useful than most people think. We teach our students how to do rolls and proper falls, and these Ukemi techniques are things that, once they become ingrained, you know how to fall where the weight comes down on different parts of your body that aren’t as likely to get hurt. You will probably still be bruised, but you’re less likely to break a wrist or an ankle.

“It is all about using what you learn and your body’s ability to memorize those things to attain a better level of physical fitness and of self,” he added. “Then you can go out and do life better.”

Newland recently earned his second-degree black belt in Okami Ryu Do Bujutsu, officially earning the title of Sensei, and is still hard at work perfecting his martial arts; the teacher, he said, must first and always be a student because there is always more to learn.

Newland isn’t the only member of his family earning belts. His son, Braxton Newland, recently earned his second-degree brown belt at age 7.

“I like doing all the forms,” Braxton said. “My favorite is Taikyoku Shodan (basic form three).”

However, with all of the things he does enjoy, push-ups are not one of them, he said. Still, he does plan to continue training for a long time, he said.

The Okami Ryu Do Bujutsu school is located in the Applegate Shopping Center in Greenupm and Newland said they are currently accepting students. The doors typically open at 5:30 p.m. for classes, and they can be contacted through their Facebook page of by telephone at (606) 694-5497. Classes are open for all ages from children to adults.