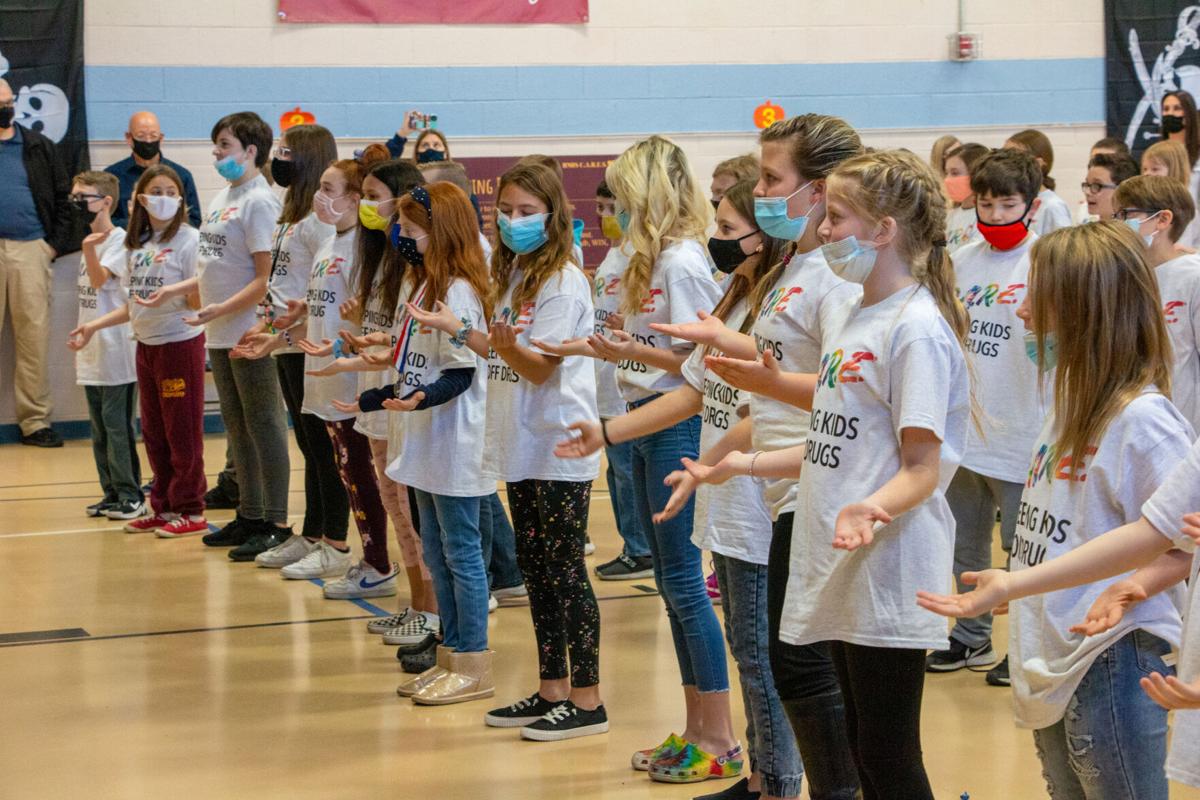 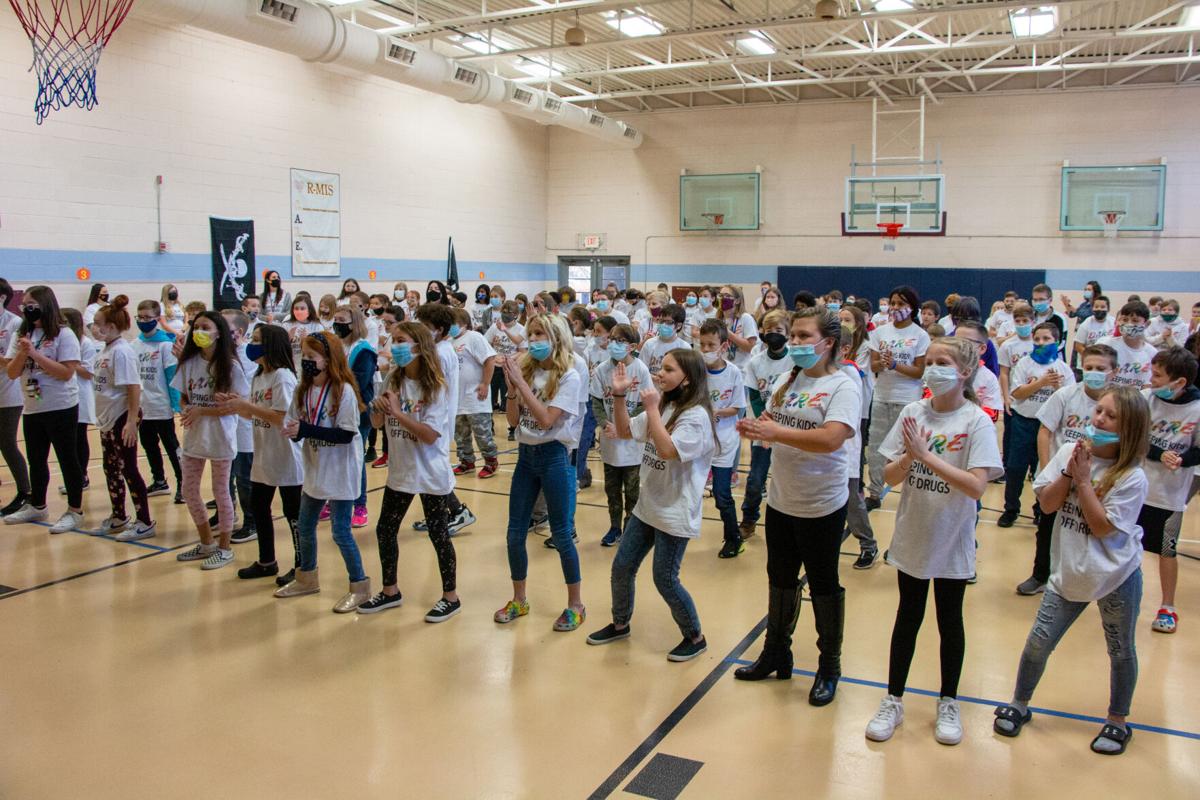 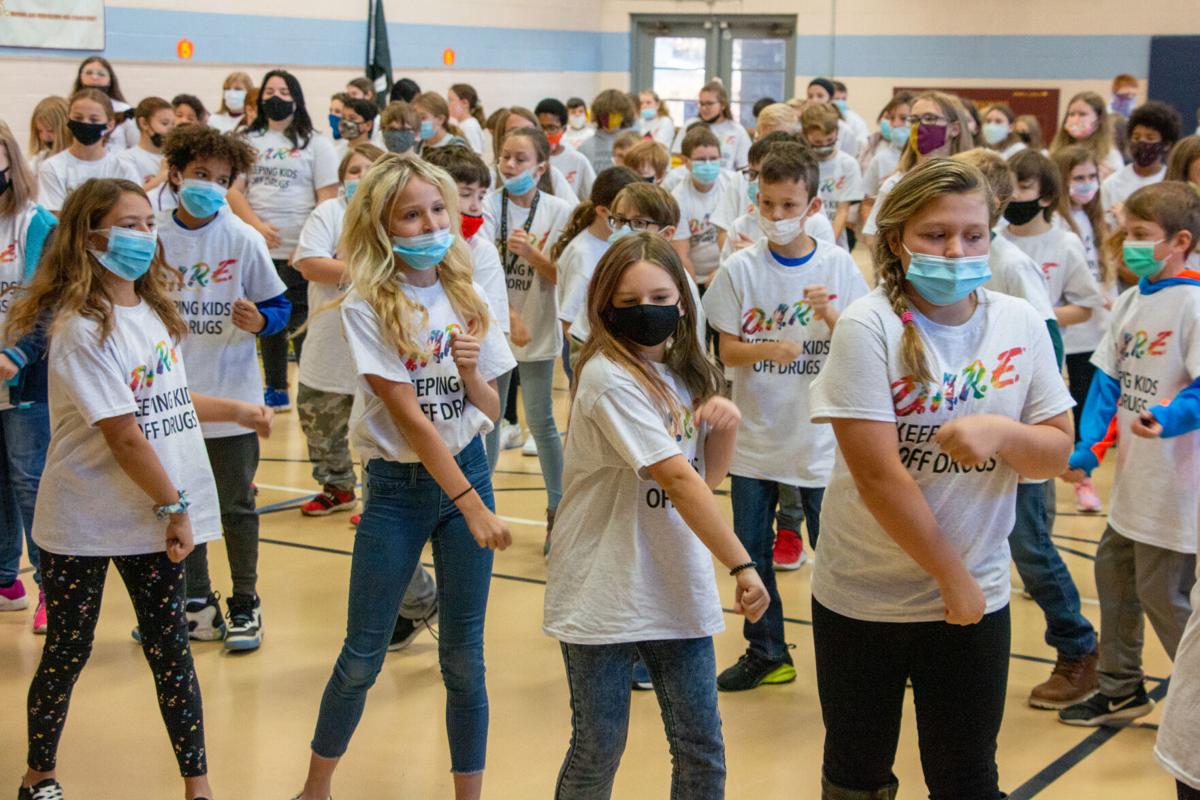 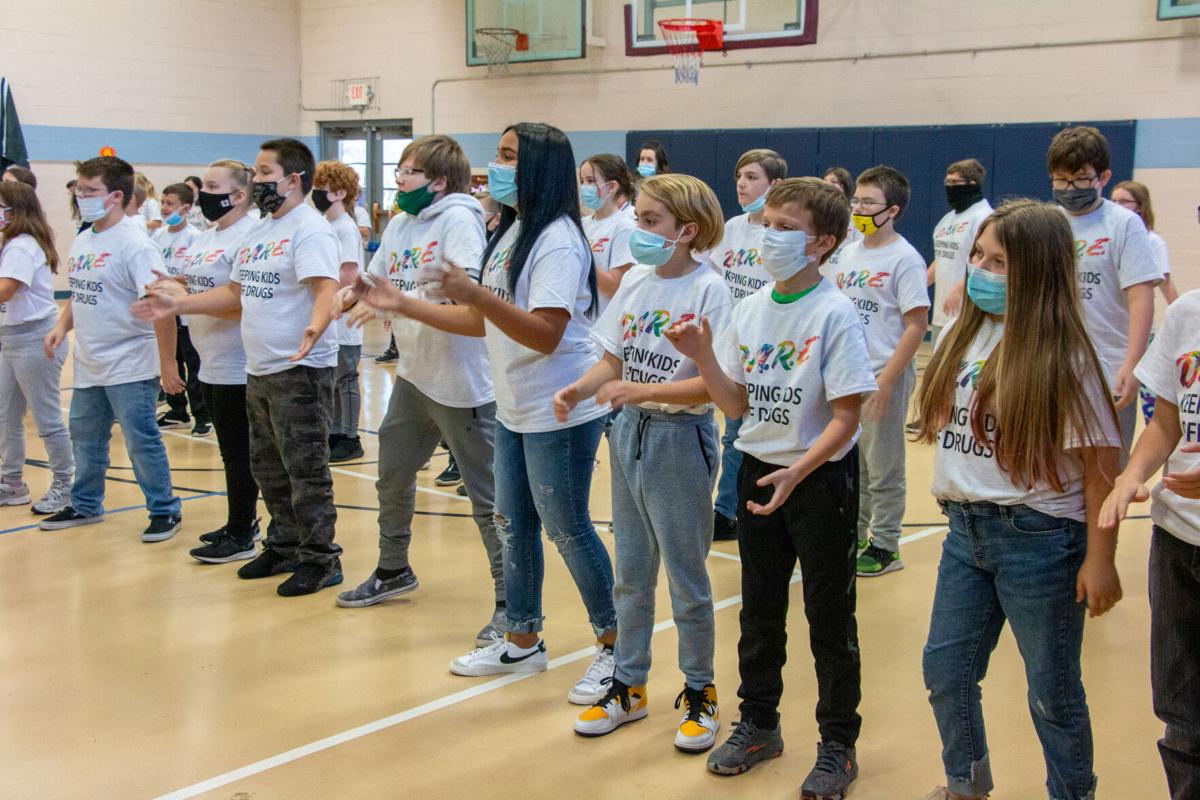 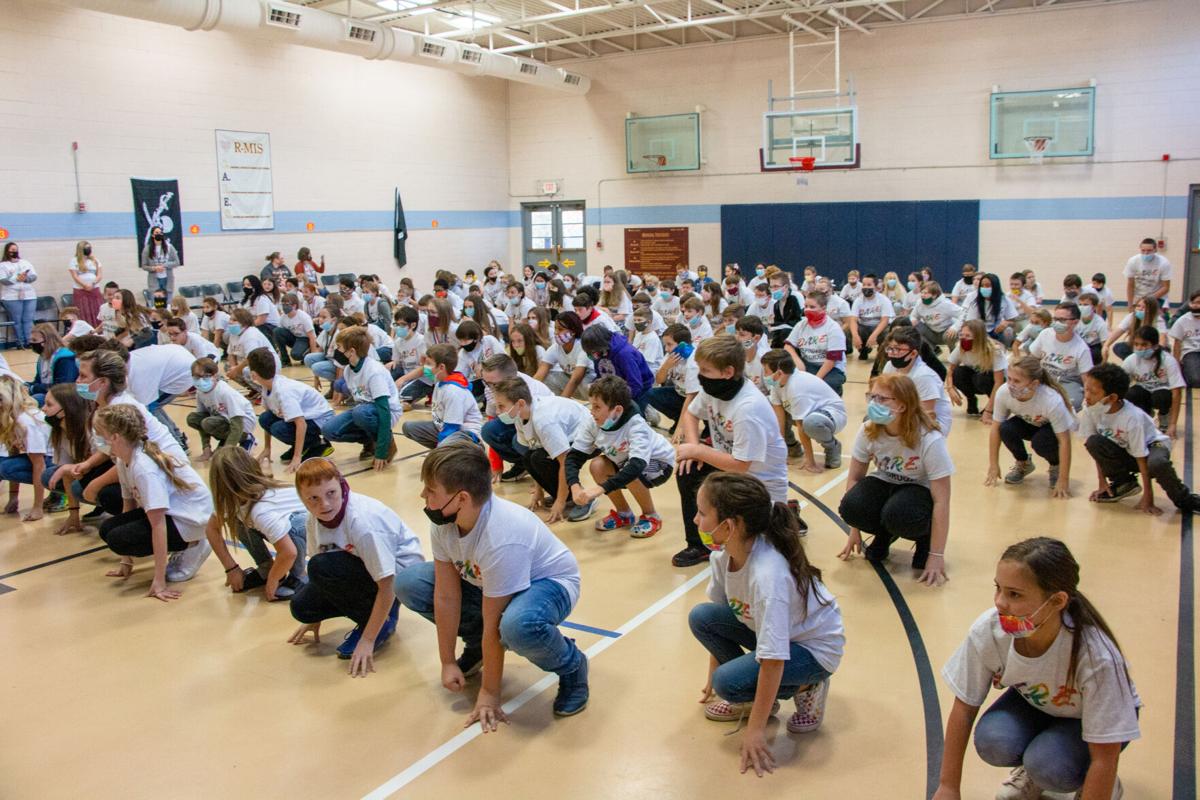 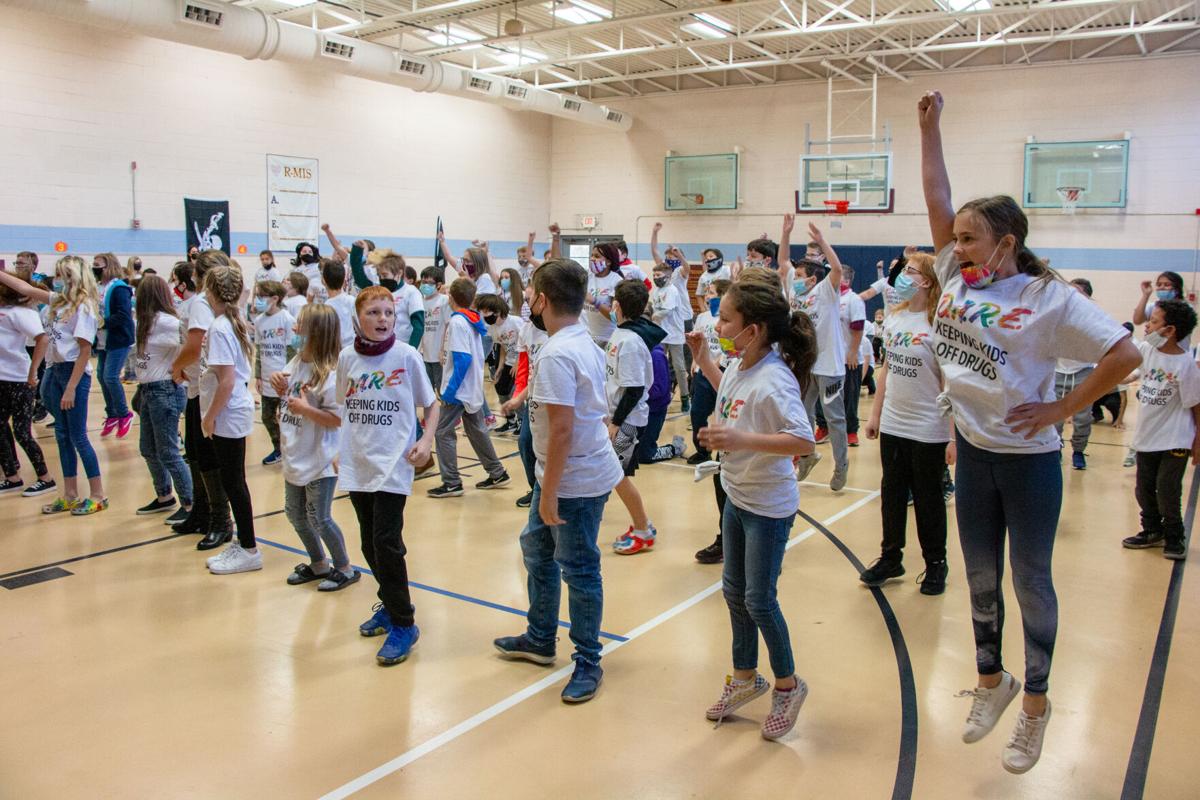 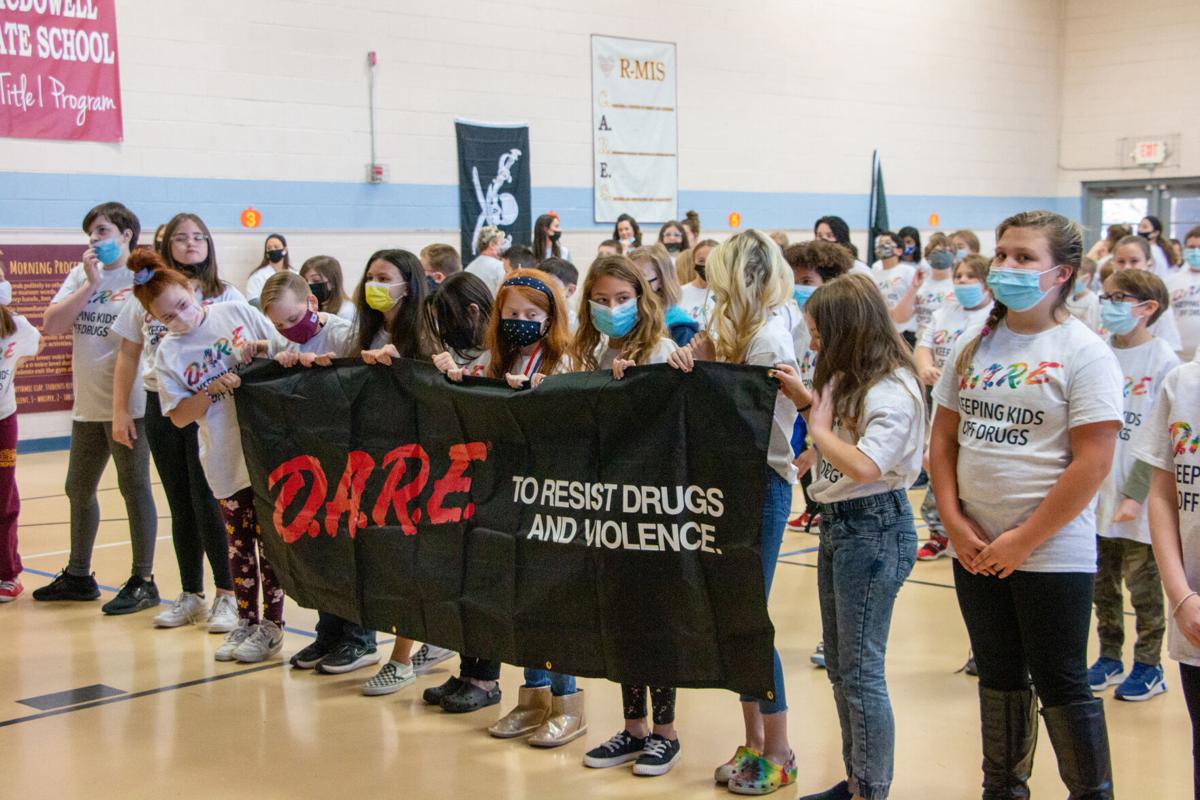 The fifth-grade class gathered in the gymnasium of the school all dressed in white shirts with the D.A.R.E. logo in a tie-dyed rainbow text and “Keep Kids Off Drugs” in black underneath.

Officer Tackett was welcomed to the podium with roaring applause from the students seated on the basketball court. Tackett acknowledged the teachers as well visitors who were in attendance.

Flatwoods Police Chief David Smith and Mayor Ron Fields were there to support the students as they wrapped up the program along with teachers and administrators from the school.

Every student wrote an essay on what they had learned in the D.A.R.E. program and how they would apply the lessons to their life. Winners of the essay contest were chosen from each class as well as an overall winner for the whole grade.

Each winner was asked to read their essay in front of the audience, or they could ask Officer Tackett to read it for them.

In the essays the students shared about the D.A.R.E. decision-making model which begins with “define” and helps the students stop and determine the problem. The next step is to “assess” the situation and begin to make a choice. The students “respond” to the problem and “evaluate” the decision and the outcome.

This model has helped the students in their lives so far, according to their essays. Students shared of how they have or will use the model to help them make responsible decisions.

The D.A.R.E. program, or drug abuse resistance education, is known for teaching students about the dangers of drugs and how to say “No.” Officer Tackett shared that its scope is wider. The program gives the students tools and tips on how to be more responsible and make wiser decisions no matter the situation.

The students noted what they learned about the harmful effects of drugs and alcohol and pledged to always say “no” when in a situation where they are presented with a harmful substance. Multiple students noted the health impacts drugs and alcohol have on the body and brain. They shared that alcohol weakens the heart and reduces blood to the brain.

One student, Jackson, took the time to ask his peers if they have family who struggle with alcohol, drugs or cigarettes and a majority of his class said they did.

Isabella Moore said there should be D.A.R.E. everywhere and wrote in her essay about how to handle stressful situations by taking deep breath, going somewhere quiet and positive thinking to calm nerves. She shared an example of being nervous and shaky before a test, but taking a deep breath and thinking she will do well helps her calm down.

Isabella Beatty encouraged everyone through her essay to think about the reason behind a bully’s action and to remain calm. Some people being bullies at school are in tough situations at home or may be experiencing bullying themselves.

Fighting back and getting upset can encourage the behavior to continue, multiple students shared. Max pledged in his essay to never bully and stand up for others, using empathy rather than judging someone.

Overall winner Khloe said the lessons learned in D.A.R.E. will help her at 11 and 51. She said she is prepared to succeed at any age, make responsible choices and good decisions daily.

The ceremony wrapped up with all the students on their feet singing and dancing to their D.A.R.E. song. The students sang loudly and moved to the beat in their choreographed number as some of the lyrics repeated “I will respect myself.”

The students continually mentioned how thankful they are for Tackett taking the time to be with them for the last 10 weeks. They shared how the program and Tackett will stay with them through adulthood and help them be responsible in many ways.

The essay winner all mentioned Tackett and his impact, others came up to the officer after. Tackett was thanked and asked for a hug as well.

Tackett recalls his D.A.R.E. officer, Kevin Bowe, who was standing alongside the Chief of Police and Mayor in the RMIS gymnasium Tuesday morning. Tackett remembered the program he went through in 1993 and even brought in his original completion certificate from that year.

He remembered the impact it had with him. When Tackett became the school resource officer for Russell in January 2016, he asked the school and city to back him and bring the program back to the district. They got behind him and the program was at Russell again in January 2017. Tackett works with the fifth- and seventh-graders in the district through the D.A.R.E. program.

This fall, he spent 10 weeks teaching seven fifth-grade classes. He would visit about two classes each day. He will go to the seventh grade next.

Tackett concluded the ceremony thanking the students for being willing to learn and shared that he was proud of them. He said they should be proud of what they learned and that he has learned from them as well. He said he learns something new every year.