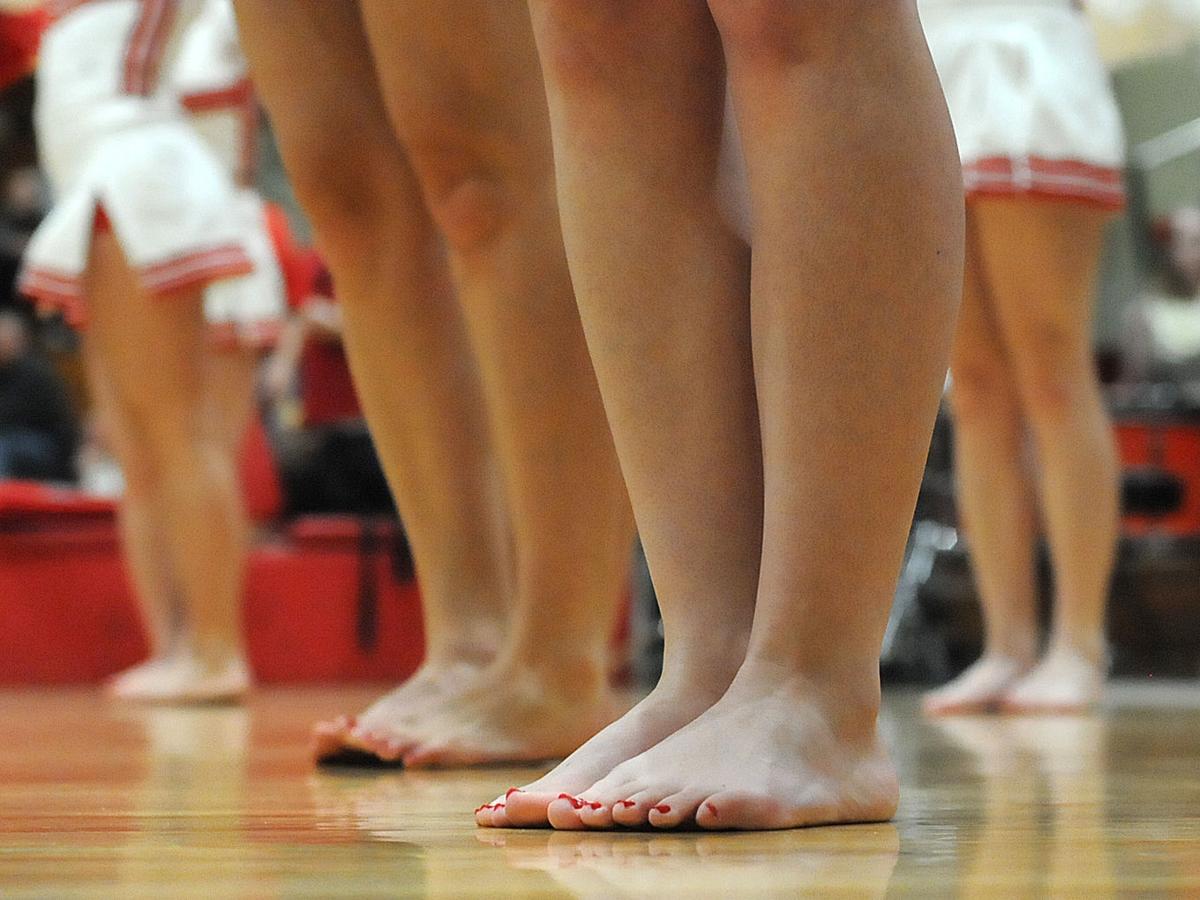 The Boyd County cheerleaders went barefoot for the Lady Lions and Kittens game last night in support of Samaritan's Feet and Amy For Africa. KEVIN GOLDY / THE INDEPENDENT 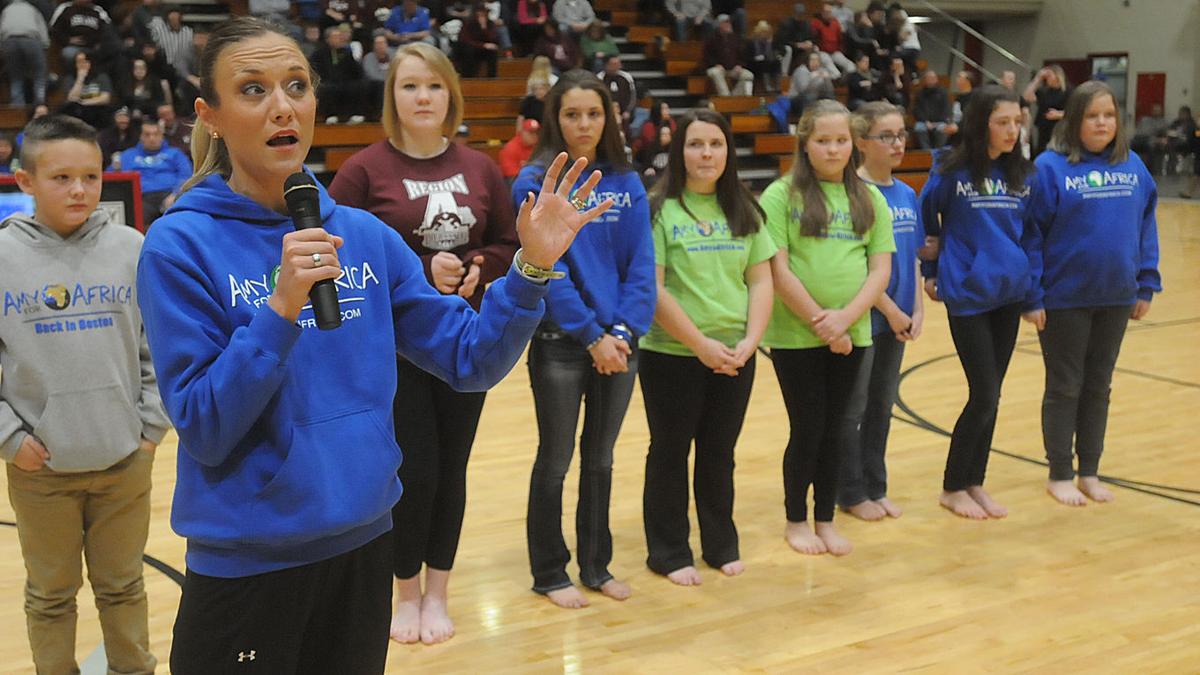 Amy Cumpston explains the fundraising between Ashland and Boyd County schools in support of Samaritan's Feet and Amy For Africa. KEVIN GOLDY / THE INDEPENDENT

The Boyd County cheerleaders went barefoot for the Lady Lions and Kittens game last night in support of Samaritan's Feet and Amy For Africa. KEVIN GOLDY / THE INDEPENDENT

Amy Cumpston explains the fundraising between Ashland and Boyd County schools in support of Samaritan's Feet and Amy For Africa. KEVIN GOLDY / THE INDEPENDENT

ASHLAND In a competition benefiting a charitable cause, everybody wins.

Amy For Africa, a local campaign seeking to raise $52,000 by April to give 26,000 pairs to children in Moyo, Uganda, added fire to the classic rivalry between Ashland and Boyd County high schools during its girls basketball game Saturday night at the Boyd County Middle School gym.

The Kittens defeated the Lady Lions, 62-56, in the battle on the basketball floor. However, Boyd County edged Ashland in the fundraising for the night.

Though the winning school technically only won bragging rights, Amy For Africa challenged Kittens and Lady Lions supporters to out-fundraise each other to help benefit the cause.

Boyd County’s collection of $1,385.51 barely beat Ashland’s total of $1,229.16, but regardless of the winners, the one night of fundraising resulted in 1,300 pairs of shoes for children in Moyo. The organization pays $2 per pair of shoes for shipping. Samaritan’s Feet already purchased the 26,000 shoes, brand new from Skechers.

Even more visible than the collection cans passed along the bleachers were the Ashland and Boyd County coaching staffs, plus the Boyd County cheerleaders, all of whom performed barefoot during the game.

Ashland Head Coach Bill Bradley said his feet got cold during the course of the evening and joked with the referees about his bare feet.

“Amy (Compston, co-founder) had a great talk with our girls (players) a couple of days ago, not just for what is being done for the kids of Africa,” he said. “She talked about the gifts our players have and how important it is to use them for the community.”

After the game, Boyd County Head Coach Pete Fraley said, “We’re blessed, I'm blessed, our kids are blessed. We don’t have to worry about things like having shoes. I’m very happy to be involved and appreciate Amy and Mark for putting this together.”

Coach Fraley’s wife, Sunny Fraley, said her husband, unlike Bradley, did not get a pedicure before the game. Actually, as it turned out, neither did Bradley; it was only some Facebook pranks.

However, Mrs. Fraley did almost convince her husband to put sunless tanning lotion on his pale, white feet.

“Look, you can see his feet — they’re so white,” she said with a laugh while watching the barefoot coaches conference with the referees before the game. “(He wears socks) all the time. He’ll hardly ever wear sandals or go barefoot.”

But she said he didn’t mind slipping off his stockings in support of Amy For Africa, which works with the charity Samaritan’s Feet, which Fraley said her husband has worked with in the past for a Wolfe County campaign putting shoes and socks on local students.

Despite the rumor that Bradley pedicured his toes before baring them on the court, it may have been nothing more than cheerful hearsay.

Ashland Blazer Principal Derek Runyon was at the game and has been involved with Amy For Africa since it began in 2013. He joked that Bradley “may have needed” the pedicure, but he did not believe he actually followed through on the prep work.

Jokes aside, Runyon said it was great to see his school helping to raise awareness for the shoe campaign.

He said the high school does in-house and in-district charity work, but that it was great to see work being done in the community.

“It’s great to have students understand that it’s a big world outside the little world they live in here,” Runyon said.

Amy Compston, Amy For Africa co-founder, gave a short presentation at halftime. She said supporters have already raised $30,518 in just over five weeks, putting them on track to meet the overall $52,000 goal ahead of the April 30 deadline.

Though the campaign will stop funding shoes once it reaches its goal, she said additional donations people may want to give will go toward supporting the five schools the group has helped establish in Uganda.

Compston said 100 percent of funds will go straight to shoes, as the organization is not only not for profit, but it also does not have bills or administrative fees to pay.

“It’s just the grace of God,” Compston said when asked how her and supporters raised so much in so little time. “Mark Maynard (co-founder) and I could not have done this on our own.”

She said the outpouring of support from the community during the basketball game was encouraging.

“We truly, truly appreciate both coaches and supporters from the community, not just in our city (Ashland), but it’s great to see support all over the county,” Compston said.

For more information on the shoe campaign, go to amyforafrica.com/afa-partnering-with-samaratins-feet.