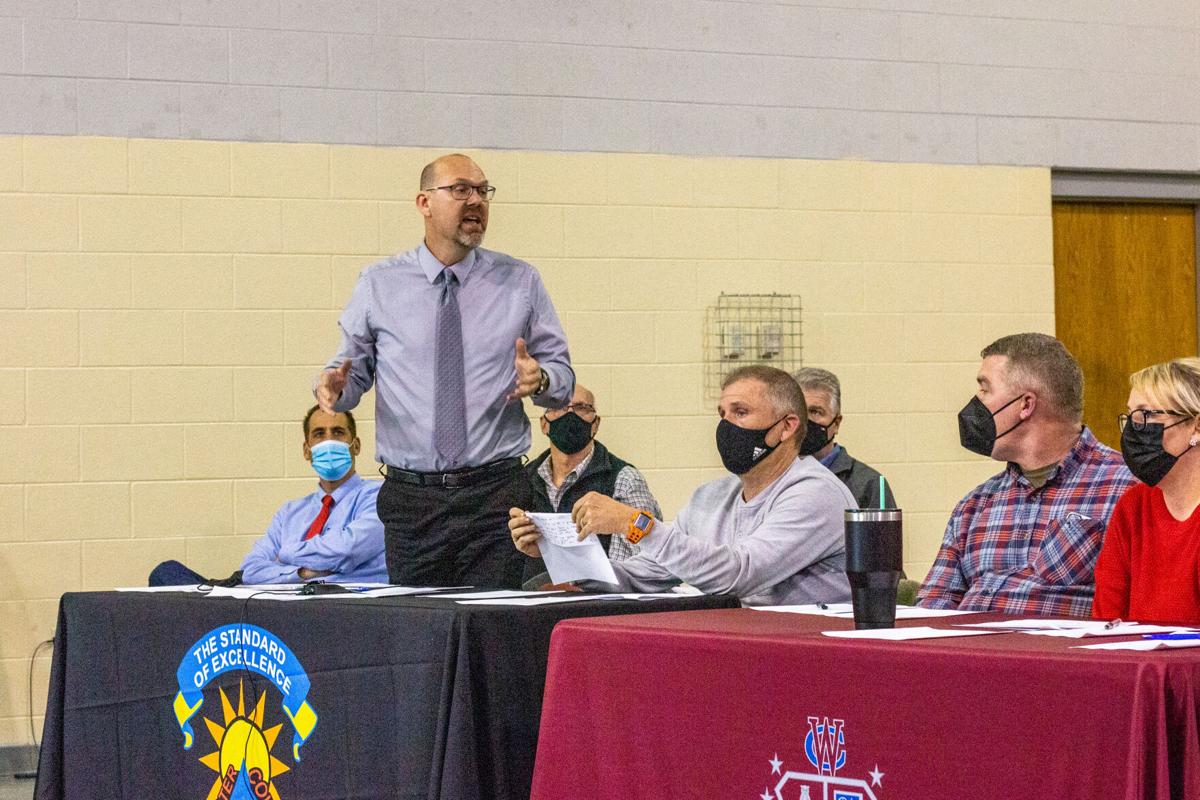 Andy Lyons, Carter Schools director of finance, shares about the potential that comes with a consolidated high school. Emily Porter | The Daily Independent 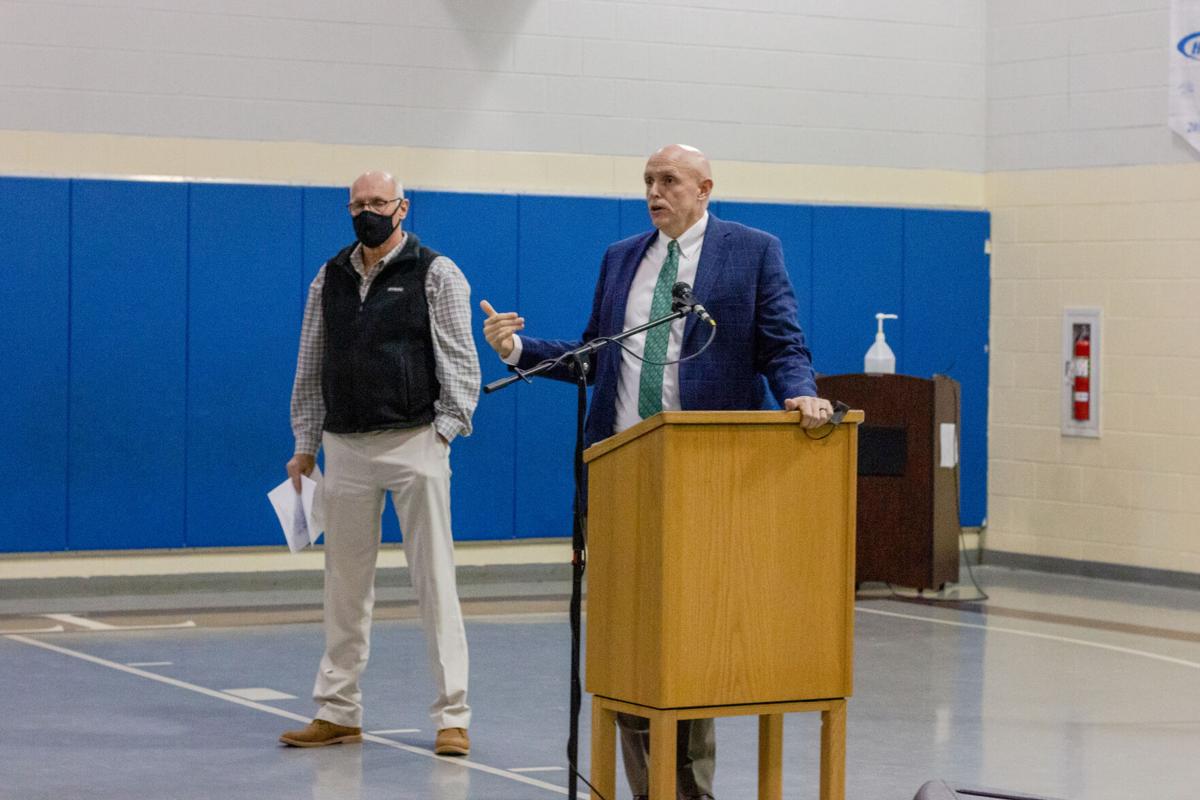 Carter Superintendent Paul Green answers questions from the public and commits to transparency as they work to find answers to questions brought during the meeting. Emily Porter | The Daily Independent 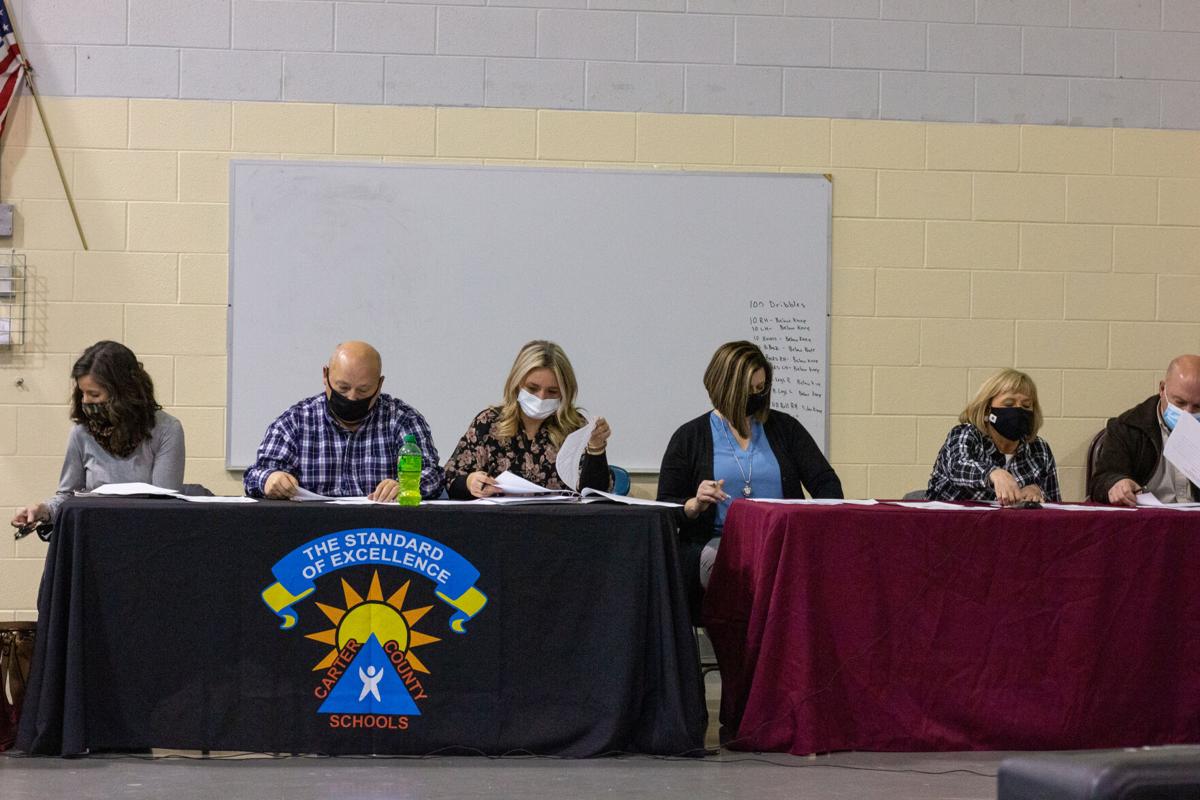 Andy Lyons, Carter Schools director of finance, shares about the potential that comes with a consolidated high school. Emily Porter | The Daily Independent

Carter Superintendent Paul Green answers questions from the public and commits to transparency as they work to find answers to questions brought during the meeting. Emily Porter | The Daily Independent

The committee was presented with the financial state of the district and what money was available for each piece of the project and where they money is allowed to go if the district does or does not consolidate.

The Daily Independent will further look at those numbers as well as the modification to the district facilities plan that was presented to the committee and public.

Essentially, the district has funds that are allocated to East Carter High School that has been earmarked by the state. This funds total about $14 million and must be matched through bonding potential, according to district finance director Andy Lyons. Those funds must be matched before the district is able to move forward with any other part of the district facilities plan due to the regulations coming with the money and bonding ability the district.

The district also has ESSER funds that are marked for COVID relief that allow the district to do things such as HVAC and roofing. Adding in the district’s projections, which were used with a formula that was conservative and held back funds from projections to be safe. The district’s bonding potential is approximately $30 million, according to the projections.

Due to the earmarking of the East Carter funds the district’s No. 1 priority of renovating the career and technical has been delayed. If funding comes through as expected, building a single campus with a central high school and a career technical center would allow both to be done simultaneously, and if there is any delay in the career and technical center, Lyons said he would expect the delay to be a maximum of three years.

The plan would build a single high school. Additions to the architectural plan that will be presented at the second meeting Feb. 7 at Prichard Elementary at 5:30 are to include more. Superintendent Paul Green said the goal if approved would be to build the high school, technical center and sports complexes at the same time.

Lyons explained that sometimes those things are contingent on when funding comes from the state. If the funding is available for all to be done in one swoop it will be or within the smallest timeframe possible.

Following the presentations, the local planning committee opened the floor to the public in attendance. The community voiced its concerns, which mainly involve sports opportunities and Olive Hill’s community. Community members were concerned with the economic impact of West Carter High School leaving the city. Others were concerned with teacher employment.

Others were still angry over the closing of Olive Hill High School, the consolidation of the elementary schools that upset many. Location was a big factor, but would not be decided by the committee and cannot by state regulation be decided at this point in the process.

Some were concerned with the ability to keep students in opportunities that double in participation size, specifically those with limits like sports. Green addressed this with The Daily Independent following a previous board meeting. Green said there is the possibility to field varsity, junior varsity and freshman teams as well as add sports like esports and field hockey. Of course, none of that is decided, since the school isn’t confirmed to be built yet, but are possibilities that can be considered should the district move forward.

A few parents made a point about the ability to provide a quality education should be the ultimate decision maker. The local planning committee largely discussed the consolidation’s ability to increase career and technical programs and career pathways in order to better prepare Carter County students for life after graduation, which fits with the district’s overall mission.

At the end of the discussion period, Dr. Green took the microphone to address the crowd and answer questions. He committed to being open and transparent and shared of plans to get student input in the next couple weeks. It’s at the top of his agenda for his meeting with the principals, said Green.

Green shared that he will be going through the meeting and writing down the questions asked. He assured the public that he understands that it is frustrating to not have all the answers, but he promised to communicate those answers before the February meeting. He even said he would take the time to type out answers to every question and make it available for the public.

“It may not be what you want to hear,” he said, but committed to giving honest answers. He willingness to go the extra mile in communication was received with a round of applause.

The local planning committee will decide if the issue should go to the Carter County Board of Education, if approved, it will move the Kentucky Department of Education for approval and then make its way back to the Carter Board to begin the process that will ultimately determine location, size, makeup and other key pieces before construction begins.

The second meeting will be conducted at Prichard Elementary at 5:30 p.m. Monday, Feb. 7. The planning committee will vote to send its recommendation to the Carter Board of Education to move forward or not with consolidating the high schools.