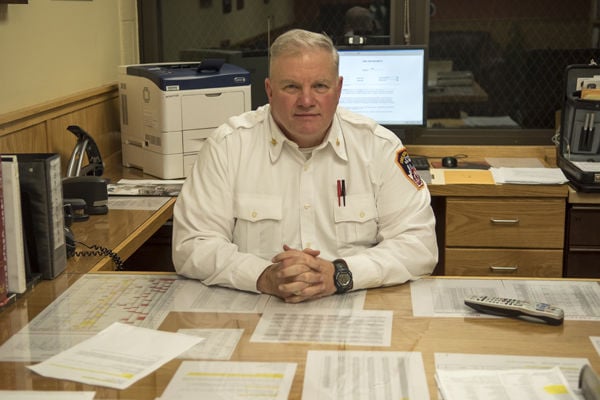 Deputy Chief Jay Jonas at his desk in the Bronx. Photo by Falecia Collier 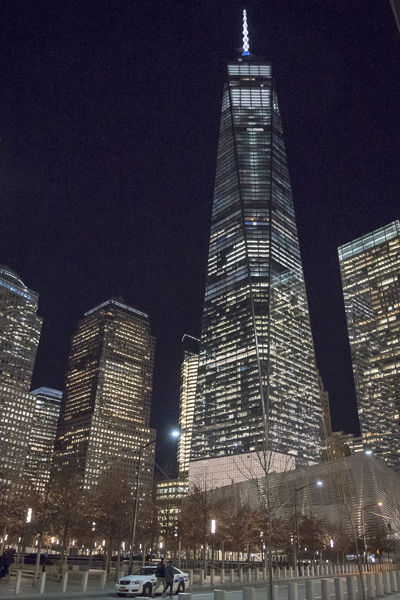 The Freedom Tower at night. Photo by Falecia Collier 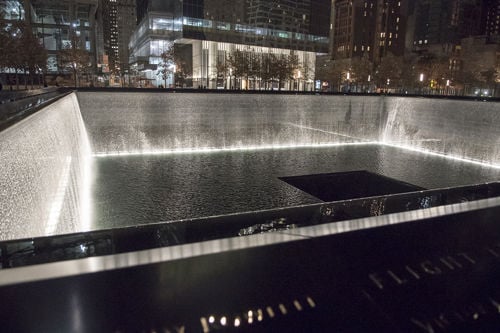 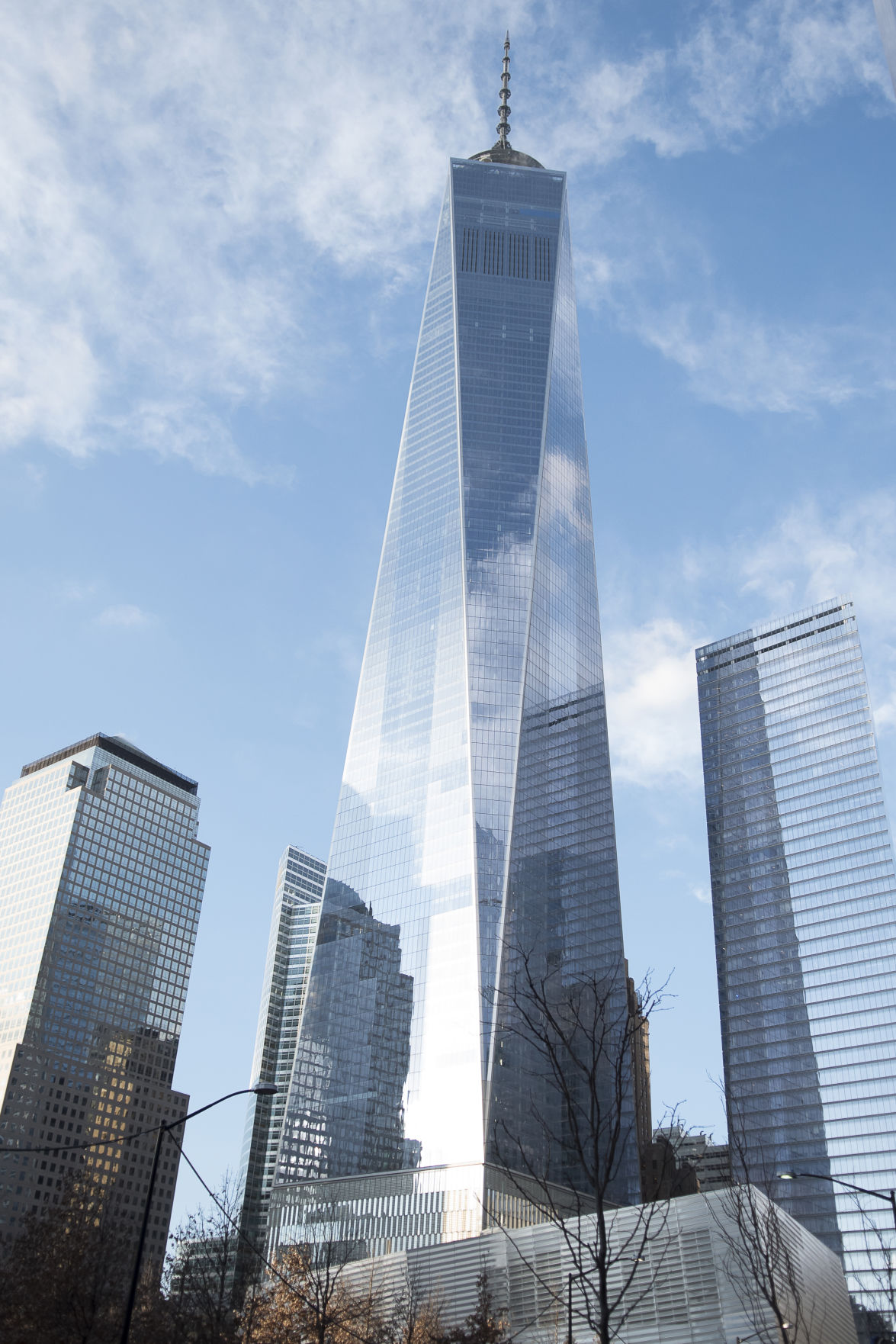 The Freedom Tower in New York. Photo by Falecia Collier 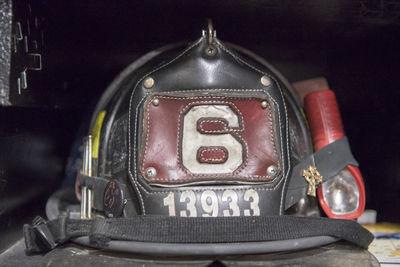 Deputy Chief Jay Jonas at his desk in the Bronx. Photo by Falecia Collier

The Freedom Tower at night. Photo by Falecia Collier

NEW YORK—Fifteen years ago today not only changed everyone’s lives forever, but also became be a day that will never be forgotten. When talking about the events from 9/11, one common question often comes to the forefront, “Where were you that day?”

For one individual, the chance of ever forgetting his experience that day is impossible. For him, not only did he play a major part in the rescue efforts at the World Trade Center, he was one of few that lived to tell about it.

His name is John Jonas, but his crew simply called him “Captain Jay.” Jonas was the captain of FDNY’s Ladder Co. 6 based out of Chinatown, approximately 2 1/2 miles from the World Trade Center.

The morning of Sept. 11 was a calm one for the house of Engine 9 and Ladder 6. After heavy storms and tornado-like winds rolled through the New York area overnight, Jonas said the skies could not have been a bluer blue the following morning as the voters headed to the polls. As Jonas explained, it started as a normal morning at the firehouse, but tragedy was looming overhead.

“I came downstairs to fix my breakfast, a bowl of Wheaties and a cup of coffee,” Jonas said. “I was sitting in the firehouse kitchen and I could hear a loud jet trail go across the sky and then I heard a loud boom. It almost sounded like a truck had driven off the nearby Manhattan Bridge.”

The loud boom was American Airlines Flight 11 slamming into the top of the World Trade Center North Tower.

Jonas said the firehouse watchman called out the crash over the intercom and he knew what started as a normal day was about to be anything but.

“We were the second alarm for the World Trade Center,” Jonas said, “so I knew we would be called for the crash. I told my guys to load up and we headed that way.”

Ladder 6 arrived just minutes after the initial impact and were greeted by falling debris, making it a challenge just to get equipment from their rig. Jonas said they used the pedestrian bridge that connected to the World Financial Center as a shield, while making a run for more equipment in between voids of debris raining down from 1,300 feet above.

As Ladder 6 entered the North Tower, Jonas said he found two people who were badly burned just inside the door. This would be the first of many choices the Captain would be challenged with over the next several hours.

“I was faced with my first decision of the day,” Jonas said. Do I stop and help these two people or do I go upstairs and help maybe 500 people?”

Jonas beckoned two paramedics to assist the burned victims before reporting to the command post. His orders, report to the 93rd floor of the North Tower and battle the towering inferno. Jonas recalls his initial thoughts as his company entered.

“I had 22 years of experience and had worked in some of the busiest houses in New York City and nothing prepared me for what I was seeing,” Jonas said. “A 110-story building with the top 10-15 floors engulfed in flames.”

But before Jonas and his crew made it from the lobby, the realism of what was transpiring around them hit home when the floor around them began to shake followed by a loud explosion.

United 175 had slammed into the South Tower, creating a gapping hole between the 75th to 85th floors.

“You could’ve heard a pin drop,” Jonas said of the setting in the lobby. “It changed the whole calculation. Being not really naïve, but you couldn’t conceive that kind of evil, at least at that time.”

What began as a possible horrific accident had taken an evil turn for the worse. The possibility had become a reality, we were under attack. But the firefighters would not flinch from their assignment, rather they accepted their fate—whatever it may be—and marched on doing what they do best, protecting their community.

Three-hundred-forty-three FDNY firefighters perished that day, but Jonas and his crew of Ladder 6 was one of the few miracles.

Ladder 6 made it to the 20th floor of the World Trade Center when the unimaginable happened, the South Tower, just 53 minutes after impact from United 175, had collapsed. Jonas said he made the call to pull his company out, knowing if the South Tower could collapse, so could theirs. Before they exited, a civilian who had ventured from the 73rd floor crossed paths with the members of Ladder 6.

Her name was Josephine Harris and she would quickly become known as Ladder 6’s guardian angel.

“We didn’t go there to have the World Trade Center experience,” Jonas said. “We went there to save somebody’s life. She (Josephine) quickly became the reason why we went there.”

Harris had been injured in an accident two weeks prior to 9/11 and the trek from the 73rd floor had taken its toll on her body. However, Ladder 6 was not about to leave her. It was a slow but gradual exit until the crew reached the fourth floor, when Harris said she could not go any farther. While the crew searched for a chair to load Harris onto to aid in the rescue, they felt the rumble once again, but this time it was followed by extreme gusts of winds and deafening noises.

The 1,350-foot North Tower was pancaking its way toward the ground and the crew of Ladder 6 was trapped between the second and fourth floors. Within minutes after the tower crumbled, Jonas gathered his troops and found they all were alive, including Josephine.

Jonas and his crew diligently searched for a way out, but had no idea of what had occurred as a result of the collapse. Jonas was reluctant to leave, not knowing what was waiting outside of their safe haven and continued to rally his troops, trying to keep them focused on the task at hand, getting out alive.

“I told my guys, look we survived this, we’re not only going home, but we’re going home today,” Jonas said.

The afternoon hours were quickly slipping away when Ladder 6 saw its first sign of reprieve.

“About four hours into our collapse, all of a sudden we could see a little beam of sunshine hit the floor,” Jonas said. “I was looking up and I could see the blue sky. I kept looking up and down and I couldn’t believe what I was seeing and I said guys, there used to be 106 floors over our heads and now I see a blue sky. I think we are on top of the World Trade Center.”

While they were not on top of the WTC, they were on the top of what was left after the 110-story build disintegrated around them.

Every member of Ladder 6 lived to tell their story that day, including Josephine Harris who became a member of the Chinatown company’s family.

Jonas said as he walked away from the site after being rescued, the massive destruction that surrounded the site was unimaginable.

“It was the kind of an event that pictures didn’t do it justice,” Jonas said. “If you wasn’t there you really couldn’t grasp the scope of it.”

Jonas recalled the rescue efforts at Ground Zero and the toll it took on everyone involved.

Jonas added: “Prior to Sept. 11 we had lost 762 guys in the line of duty since the inception of the fire department in 1865. We lost 343 guys in 42 minutes. We lost from a probie to the Chief of the Department and everything in between.

“In retrospect, if you were working that day, you were going in the building. It was the largest urban search and rescue effort in history. Except that most the people who participated in it were killed.”

The site of the World Trade Center has since become standing memorial to all of the innocent victims that were killed the morning of 9/11. The footprints of both towers have been converted to memorial fountains; with the victim’s names outlining both pools.

“I’m happy that they rebuilt and I’m happy that they kept the footprints of the builds sacred and they are part of the memorial,” Jonas said. “The first time I went to the memorial, it was a lot more moving than I thought it would be. Once I finally went there I was very moved by it. It’s a very peaceful place and it’s respectful.

The response to the WTC was Jonas’ final assignment as the Captain of Ladder 6. He was promoted to Battalion Chief after returning to service in October 2001. Today, Jonas is a Deputy Chief in the Bronx, working from Engine 48 and Truck 56’s station.

With all the memories and stories Jonas shared from his experience that day, there was one that he holds dear to his heart every day.

“They were some of the best people I ever knew and they were killed in an instant,” Jonas said. “Just remember them, honor their memory and remember the courage and heroism they showed…the courage just to enter the building. Just to cross that threshold and say I’m going in and I’m going to charge up those stairs and see if I can save somebody’s life. They didn’t flinch. They were the best.”

Sharing a saga of heroism amidst catastrophe